It’s been a short week, but boy are we glad it’s Friday. Here are a handful of new deals to usher in the weekend. 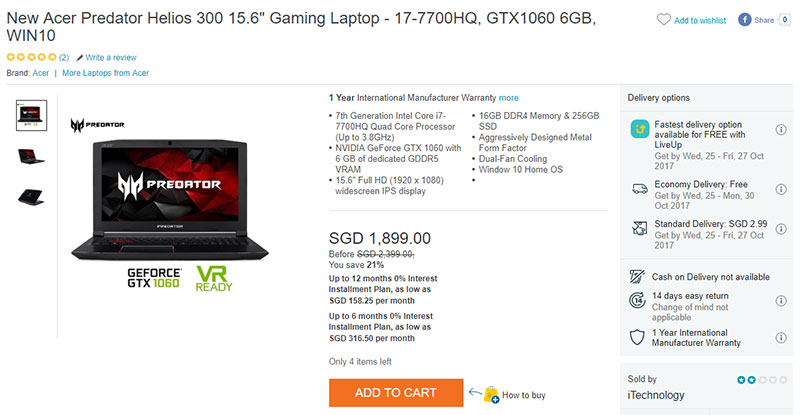 The 15.6-inch Acer Predator Helios 300 is powered by an Intel Core i7-7700HQ processor, 16GB of DDR4 memory, and a 256GB SSD. More importantly, the GPU is an NVIDIA GeForce GTX 1060 6GB, which can pretty much handle most games at 1080p. The chassis is characterized by an aggressive gamer-oriented design with large vents and red accents, so hopefully that's your sort of thing.

If you're looking for a a super large portable SSD, and don't need the latest from Samsung, you may want to give this a look. The Samsung T3 Portable SSD boasts transfer speeds of up to 450MB/s, so it's way faster than any hard drive.

If you've got Wi-Fi dead spots in your house, you've probably already thought about a mesh Wi-Fi solution. Each Velop unit functions as an AC2200 tri-band router that broadcasts on a single 2.4GHz network and two 5GHz networks, with one dedicated to handling backhaul transmissions.

4. The Witcher 3: Wild Hunt – Game of the Year Edition

The Game of the Year Edition of one of the best fantasy titles around is now on sale on Steam. This bundle comes with the base game and all additional content released to date, including the Hearts of Stone and Blood & Wine expansions and extras like weapons, armor, side quests, and game modes.

The Witcher 3: Wild Hunt already lets you roam an expansive world filled with lush visuals and fantastic beasts, but the expansion packs add up to 50 hours of additional gameplay.