With 23% of the votes, ASUS is our readers’ favorite gaming monitor brand. Of the several monitors launched by ASUS in 2017, the ones that caught our eye include the ROG Swift PG258Q, a 24.5-inch, G-Sync-capable monitor that also touts a 240Hz refresh rate; and the ZenScreen MB16AC, a 15.6-inch portable monitor that uses USB-C. We also like the ROG Swift PG27VQ, which at long last is selling in Singapore this February. Sporting a 27-inch curved panel with a 2,560 x 1,440-pixel resolution, this G-Sync-capable gaming monitor also boasts a 165Hz refresh rate, a 1ms response time, and ASUS’ Aura Sync RGB illumination for more bling. Very close behind in second place is Dell (22%), which last year introduced the world’s first 32-inch 8K monitor. The Alienware 25, a 24.5-inch 1080p monitor with G-Sync and 240Hz refresh rate support, was also launched in 2017. 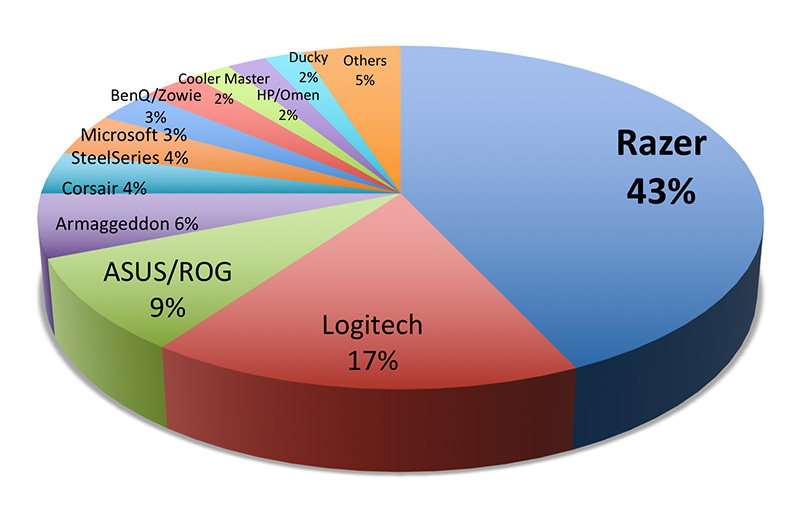 Despite featuring over 16 brands, Razer still managed to comfortably win this Best Gaming Keyboard and Mouse Brand award with a large 43% chunk of the votes. Looking back, Razer did come out with several interesting gaming input devices last year, such as the BlackWidow Chroma V2, which has Razer’s new Yellow switches and a magnetic wrist rest. For mice, we’ve the new Lancehead wireless mouse, and the Atheris, which Razer claims to be the ultimate wireless notebook mouse with gaming-grade performance. And for something more recent, the Basilisk is an FPS mouse with a customizable thumb clutch, and the Naga Trinity and Tartarus V2 is a modular mouse and keypad combo targeted at MOBA and MMO gamers. With 29% of the votes, local outfit Aftershock PC is once again our readers’ favorite gaming desktop PC brand. To recap, in 2017, we've the tiny but powerful Impulse gaming PC (which Aftershock quickly followed up with V2 just three months later), as well as the Next AIO Gaming PC with a 32-inch display and up to NVIDIA GeForce GTX 1080 Ti graphics. And just this January, Aftershock launched the Aeon 34, a 34-inch AIO with a curved, ultra-wide display and Intel’s 8th-gen Core processors. With 25% of the votes, Dell/Alienware is the winner of this category once again. In broad strokes, for high-performance gaming, Dell’s Alienware line is the one you should look at. It consists of the Alienware 13, Alienware 15, and Alienware 17, featuring technologies such as dynamic overclocking, built-in carbon fiber, and even an optional Graphics Amplifier. There are also gaming notebooks under the Dell branding. For example, there’s the Dell Inspiron 15 7000 Gaming, which is a 15-inch, full HD notebook with NVIDIA GeForce GTX 1060 graphics and Max-Q optimizations. Aftershock, which brought us the 15.6-inch Prime-15 notebook, the P-13 Helix ultrabook (which works with an external GPU dock, too!), and the W-15 Lite fitted with a six-core Intel i7 CPU, is trailing not far behind. Once again, our readers have chosen Sony as their favorite gaming console maker. To recap, there are two PlayStation 4 consoles you can get at the moment: the regular PlayStation 4 and the PlayStation 4 Pro. The former is simply a slimmer and more energy-efficient update of the conventional PS4, and is now HDR-capable. On the other hand, the PlayStation 4 Pro has a higher-clocked processor, a beefier GPU, and supports 4K gaming, HDR, and smoother frame rates. Nintendo, maker of the popular Switch hybrid console, remains in second place with 33%. Microsoft, which Xbox One X just went on sale in November, is third. With 22% of the votes, Activision Blizzard managed to defeat over 20 other publishers to snag this Readers’ Choice award for Best Gaming Publisher. Certainly, a lot of good things happened to the American company in 2017, including Overwatch becoming its eighth billion-dollar franchise, Blizzard setting a 42 million active monthly users record (thanks to Overwatch and Hearthstone), and the success of the online-only, multi-player FPS game Destiny 2. Electronic Arts (18%) and Nintendo (14%) occupy the second and third spot respectively. VR gaming is still in its early stages, but our readers already have their favorite. With 33% of the votes, Sony, maker of the PlayStation VR headset, is now a two-time winner of our Best VR Gaming Gear Brand award. Interestingly, in second place is Samsung, which makes the (comparatively more affordable) Gear VR for its Galaxy phones. Oculus VR, which makes the Oculus Rift, is third with 22%. Recently at CES, the Facebook-owned company announced that it’s working with China’s Xiaomi to make VR headsets powered by the Qualcomm Snapdragon 821 processor.