Like compact digital cameras, sales of digital video camcorders have been on the downward trend for a few years now. On one end, this is due to exploding popularity of smartphones and their increasingly better optics and software, sensors, and processing power. On the other end, they're attacked by video-recording-capable digital SLRs and mirrorless cameras. That said, many consumers still prefer the 'traditional' camcorders as they’re still easier to handle and have more video-oriented features (such as power zoom, peaking, frame rate options). For this category, we've selected four of the top 1080p consumer-level camcorders in the market right now. So which is the one that we think is the best? 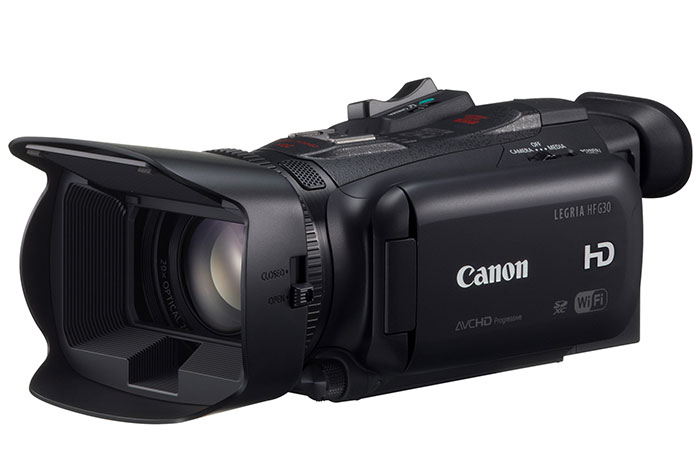 If you noticed, the Legria HF G30's 1/2.84-inch sensor packs only 3 million pixels, far less than most other camcorders, which try to also masquerade as a high-megapixel still camera. The assumption is that by packing fewer but significantly larger pixels, the camcorder is able to offer much higher sensitivity, better low light performance, and more details due to the expanded dynamic range. And for the most part, the Legria HF G30 does achieve all that. In addition, the camcorder's Intelligent IS image stabilizer is very effective, switching between four modes automatically based on scenarios, with the Dynamic mode employing a 5-axis correction.

The 1080p-capable G30 has several design wins too: a detachable lens hood with a built-in barrier in place of a lens cap, a front lens ring that makes focusing and zooming a breeze, a joystick at the back of the camera that makes menu selection easy, and the five customizable buttons found at various parts of the body. The built-in dual-band Wi-Fi is another highlight, allowing you to control the camcorder remotely or upload videos online via a mobile device. All that said, the G30 is also unmistakably heavier and bigger than its peers. Even though the hand strap is comfortable, at 765g, you'll feel the strain after prolonged use.

Coupled with a gorgeous 3.5-inch OLED touchscreen and a generous 20x optical zoom lens (with F1.8-2.8 maximum aperture) make the G30 the best flagship camcorder we've tested to date. But do remember to set aside some money for a few SDXC cards, as it doesn't come with any built-in storage. It's also worth pointing out that at S$2,499, it costs the same as the projector and 96GB flash memory-equipped Sony Handycam HDR-PJ790VE, which we put in second place. You can't go wrong with either camcorder really, but the G30's well though out controls just happened to appeal to us that little bit more.