There’s always been some confusion among consumers regarding the difference between a printer using laser technology and one that uses LED technology. In truth, both use the same underlying print technology, which is using static electricity to apply toner to paper. What differs however, is how light is being transmitted to form the image on the drum. So if you're looking for a printer that gives 'laser-like' print quality, there's no good reason to not check out LED printers at the same time. And why buy a standalone printer if you can have a single, multifunctional device that prints, scans, and copies? Here are four compact mono laser and LED multifunction printers that do just that. Best yet, with a price tag no more than S$350, none of them will burn a hole in your pocket. 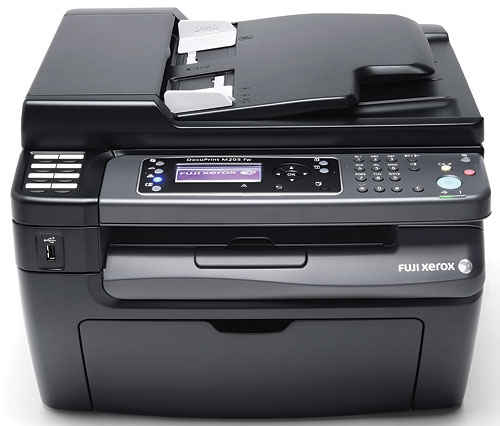 The Epson AcuLaser MX14NF has almost identical specs as the Fuji Xerox DocuPrint M205 fw. Both have a 15-sheet ADF, 160-sheet paper input capacity, 128MB RAM and 300MHz CPU. Both also claim a high monthly duty cycle of 20,000 pages. Of the four MFPs, only the MF4420w and the M205 fw come with built-in Wi-Fi support. This gives you the ability to place the printer anywhere in the room and away from the wireless router/access point. The MF4420w however, doesn't do fax nor come with an ADF. If both features are important to you, Canon has an MF4450. But since that's USB only, it makes for a better personal printer than a shared one. Performance-wise, the MFC-7360, MX14NF, and M205 fw print at the same rate, about 25ppm. The MF4420w while fast is slightly behind at about 24ppm. Print-quality-wise, both the S-LED models (MX14NF and M205 fw) manage to edge in front of their laser counterparts, with their 1200 x 1200 resolution resulting in better definition in text and smoother gradients in graphics. At the end of the day, the M205 fw emerges victorious in this group due to a better overall performance (fast print speed, great print quality), and having a more encompassing feature-set (ADF, 33.6Kbps fax, faster processor, more RAM, Wi-Fi support). If you've S$350 to spare for a mono MFP for your small office/home office, you can't go wrong with the do-it-all Fuji Xerox M205 fw. 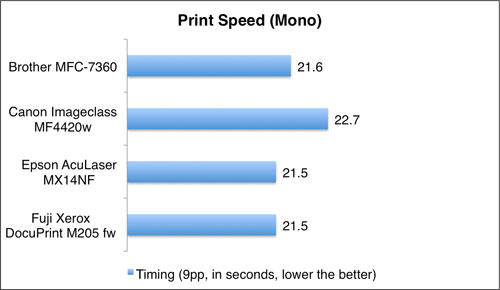