Proponents of the LED technology will tell you that it allows printers to be more compact, quieter (due to fewer moving parts) and more affordable, compared to their laser counterparts. In the past, the biggest complaint about LED printers was their low resolution, but that’s a weak argument these days. So if you’re shopping for a laser printer today, don’t forget to check out LED-based ones at the same time. Here, we've three LED/S-LED-based color multifunction printers priced below S$1000 and should suit your home and small business needs. 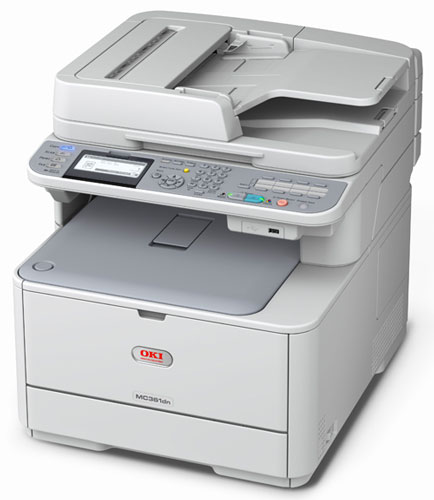 The MC361dn is a blazingly fast printer. It prints about 25ppm in mono and 22ppm in color, compared to 15ppm and 12ppm for the same tasks on both the Epson AcuLaser CX17NF and the Fuji Xerox DocuPrint CM205 fw. The MC361dn also copies twice as fast in mono - about 24cpm vs. 12cpm, and more than 6x as fast in color - about 19cpm vs. 3cpm. It also has a much faster scanner. The speedy performance is due in large part to it having twice the amount of RAM (256MB vs. 128MB) and a faster processor (533MHz vs. 295MHz). But it loses out slightly in graphics quality due to a lower resolution, which at a typical viewing distance isn't perceptible. Besides the good print performance, it has no short of other amenities. Compared to the other two MFPs, it handles more paper (350 sheets vs. 160 sheets) and has a bigger ADF (50 sheets vs. 15 sheets). Furthermore, it’s the only printer that comes with a duplexing unit, and the options to increase RAM and add another paper tray. Considering these advantages, it’s worth paying the premium for the MC361dn. 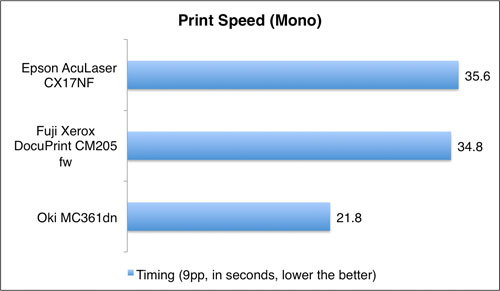 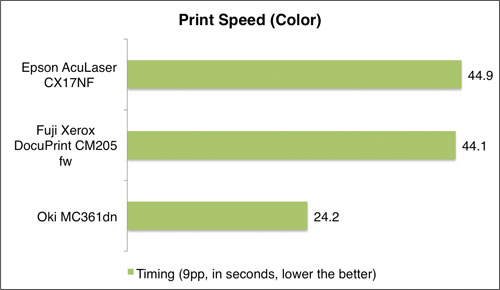