Here are our favourite new gadgets from CES 2022
Event Coverage

Tech Awards 2011 - Bigger and Better than Ever!

Tech Awards 2011 - Bigger and Better than Ever!

For the uninitiated, our first Tech Awards was held in 2001 and it was the first ever event to recognize the efforts of the tech industry in the entire region. We followed that up in 2002, but stopped for the next eight years as we focused on expanding HWM into regional markets and growing HardwareZone.com into a major IT portal in the region. Our hard work has paid off as HWM is now South-East Asia’s premier consumer technology title with independent editions in Malaysia, Thailand, the Philippines, Indonesia, and of course, Singapore. And HardwareZone.com is now Asia Pacific's leading online IT portal with the most encompassing set of services and information with the strongest tech community of over 350,000 members, a figure that's still steadily growing.

After a eight-year hiatus, 2010 saw the return of the Tech Awards. The HWM+HardwareZone.com Tech Awards 2010 was held in 3rd February last year, and we handed out 32 Editor's Choice awards from an eventual shortlist of 150 products, and 28 Reader's Choice awards comprising of 80 brands, organizations, and a small selection of favorite tech services and stores.

This year's HWM+HardwareZone.com Tech Awards was held on 23rd February, and it served to honor the best in tech products and services that were introduced between December 2009 and November 2010. This time round, we paid tribute to 39 companies across 69 categories. A grand total of 32 Editor’s Choice and 37 Reader’s Choice awards were handed out in categories ranging from computers, consumer electronics, communications and digital entertainment.

For the Editor's Choice awards, more than 170 products that fit the test categories were subject to a series of stringent benchmarking tests in the HardwareZone labs, where we evaluated the results through a specific criteria consisting of performance, consumer benefits, value and technology advancements, before finally deciding on the winners. For the Reader's Choice awards, voting was opened to readers of HWM and the online tech community in HardwareZone.com. We're proud to say that the poll garnered a total of about 80,000 votes from members of the public. 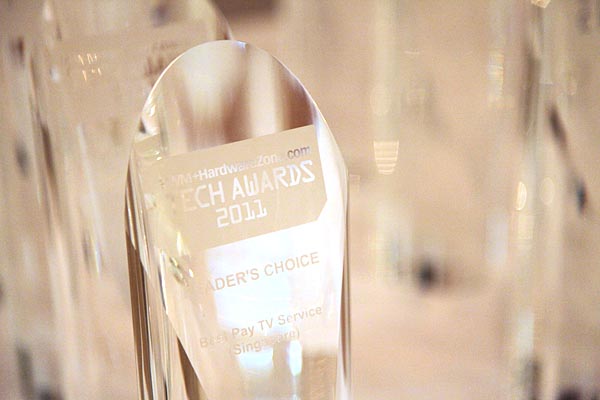 Compared to last year, an additional nine categories were introduced to the Reader’s Choice awards. New categories include Best Mirrorless Camera Brand, Best Tablet Brand, Best Mobile CPU Brand, Best PC Memory Brand, Best NAS Brand, Best GPS Brand, Best Plasma TV Brand, Best 3D TV Brand, and Best Consumer HD Camcorder Brand. This was after taking into consideration readers’ feedback and the ongoing need for the Awards to reflect the ever-evolving technology landscape that is shaping our lives and gadgets we use on a daily basis. Also new this year was the ability for readers to vote for their favourite brands online via their mobile devices.

Without further ado, here are the details of the Reader's Choice results. The event coverage and the Editor's Choice results will follow suit shortly in two more dedicated articles. So read on, and stay tuned!