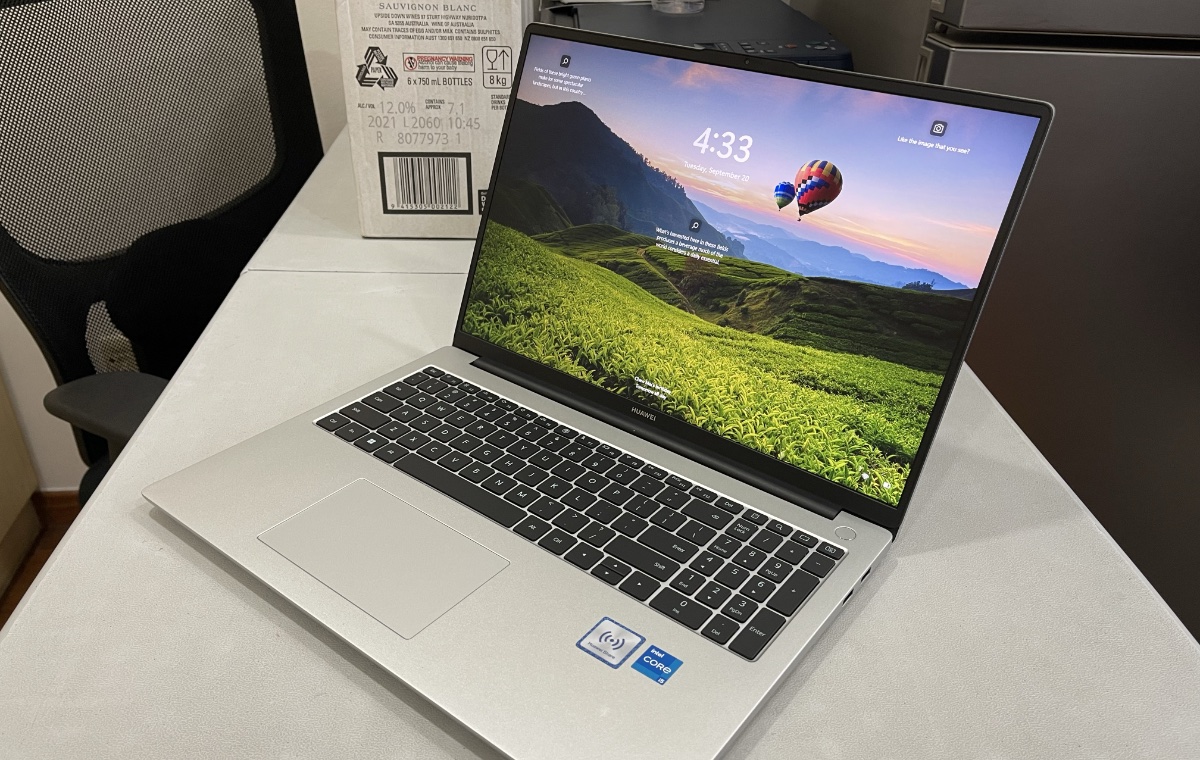 The Huawei MateBook D 16 was announced during the company’s Smart Office 2022 event in Bangkok and it's positioned as an affordable 16-inch notebook powered by Intel's newest 12th Gen Core processors. Given its attractive price – just S$1,298 – we decided we should take a closer look at it. Coming in a single colour option, Mystic Silver, the MateBook D 16 has a metallic body with a light baby-blue hue. It looks rather neat and classy, with just the company name on the cover in a more reflective silver. It is 18.4mm thick and weighs 1.7kg – very reasonable figures for a 16-inch notebook.

But notebooks with black bezels and a silver metallic body are pretty common these days, so I wasn’t that blown away by the MateBook D 16's looks. But I have to say, it felt substantive and big when I was holding it. With the display closed, there was little flexing. Unsurprisingly, there was more give in the chassis with the notebook opened, the screen especially flexed a lot more but I didn’t feel like it would easily bend or break. Huawei has also included some of its own proprietary software like Super Device. This allows seamless connection for collaboration across all your Huawei devices allowing them to function more or less like a single unit.

Open the Super Device app, and you'll see the device you're using appear as a floating bubble. Any other Super Device-compatible device will show up in its own bubble, orbiting the central device. Drag the bubble to the middle and it connects.

Connect a smartphone and it allows users to transfer files from a Huawei smartphone to the MateBook to a MatePad or even a printer. Connect a MatePad and it can be used as a secondary screen, or allow the Matebook's keyboard and trackpad to be used to navigate the tablet.

Unfortunately, I didn’t have any other Huawei devices on hand so I couldn’t test this out. The MateBook D 16 comes powered by Intel's new 12th Gen Alder Lake Core processors, specifically the more powerful H-series variant. The model I had came powered by a 12th Gen Intel Core i5-12450H processor – but there is another model that comes with the beefier Intel Core i7-12700H processor. Regardless of which model you pick, the MateBook D 16 will come with 16GB of memory and a 512GB SSD for storage.

These are reasonable specs for a notebook of its class. The display is 16-inches large, uses an IPS display, and has a resolution of 1,920 x 1200 pixels. Huawei claims it covers 100% of the sRGB colour space and has 300 nits of brightness.

The brightness was adequate for most of what I tried to do, but I had issues under direct sunlight trying to watch a movie. It wasn't the last word in sharpness and colours weren’t particularly vibrant either. 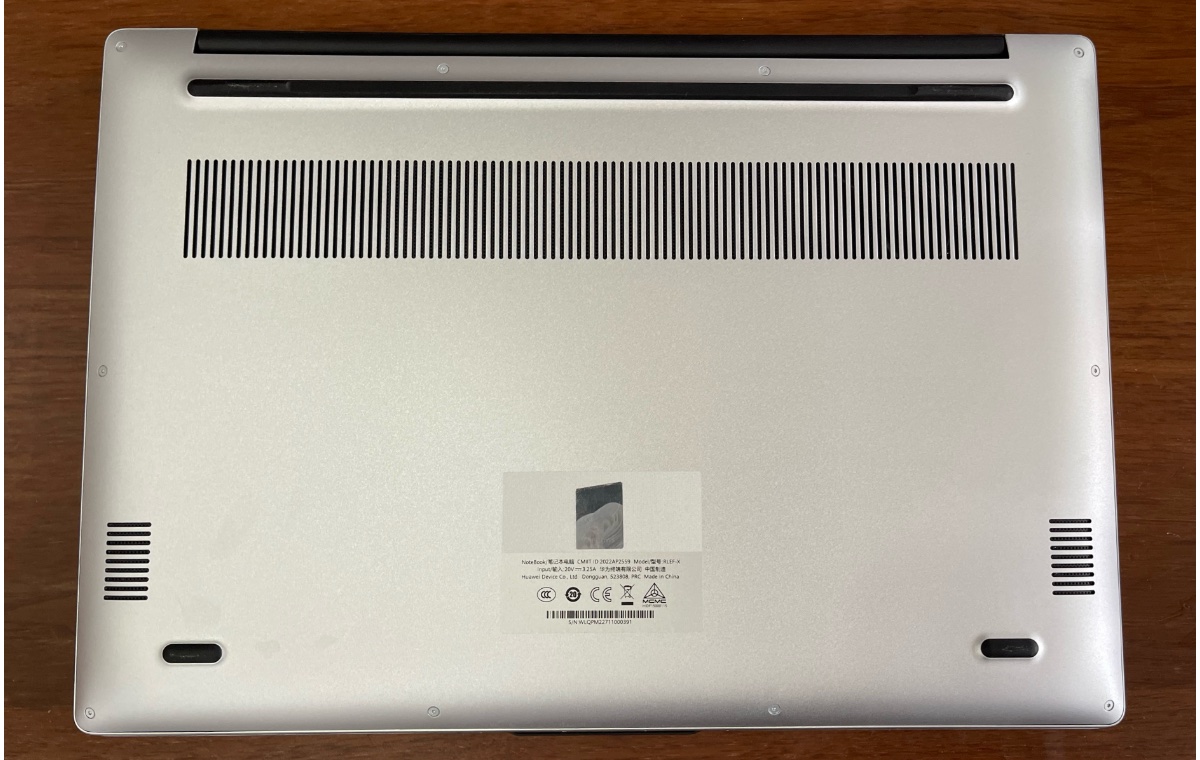 Audio is supplied from two speakers located at the bottom of the notebook. While I felt it was loud enough with no distortion at high volume, there was little depth to the sound. And like most other notebook speakers, it came across as slightly tinny. Watching a Top Gun 4K video left me wanting more bass from the sound while the video itself was slightly washed out. 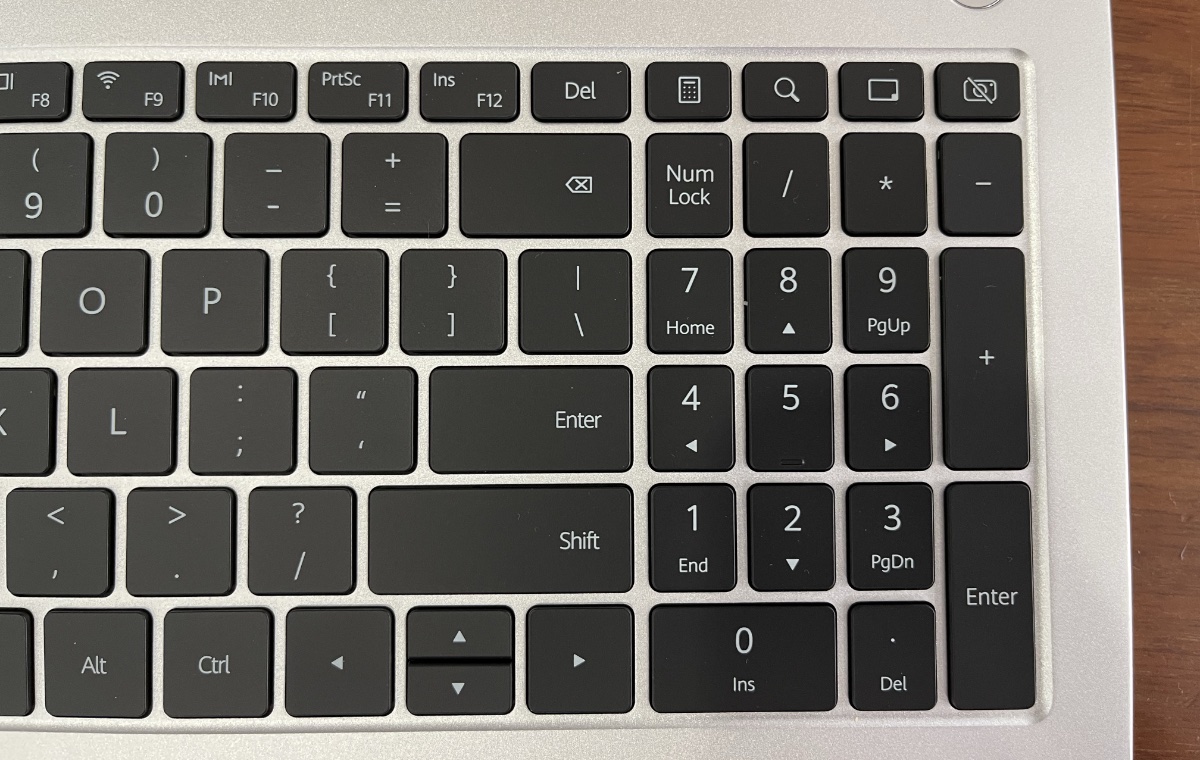 The power button also doubles as the fingerprint sensor which saves space and is a handy feature. The keyboard itself doesn’t feel flimsy and the keys have a decent amount of tactility. Because this is a 16-inch notebook, Huawei has included number and arrow keys. They are slightly narrower than the main keyboard but still perfectly usable. The trackpad is reasonably large but it is slightly off-centre. Rather than having the camera built into a popup on the row function keys like Huawei did in a previous MateBook X Pro, it is now in a notch on the top of the screen. The resolution is a decent 1080P but there's no webcam cover for privacy.

The MateBook D 16 has four mics to pick up sound and voices sounded mostly clear and crisp when video calling. I tried this out by using Zoom to call the wife while we were in different rooms at home. Noise-cancelling wasn't the best, however, as the mics were able to pick up the sound of the ceiling fan I had on.

The MateBook D 16 has pretty decent connectivity. It has two USB-C ports (both USB 3.2 Gen 1 with one supporting DisplayMode Alt mode for external displays), two USB-A (USB 3.2 gen 1 and USB 2.0) ports, a single HDMI 2.0 port, and a 3.5mm audio combo jack. There's no dedicated jack for power so you'll need to sacrifice one of the USB ports when you need to charge it.

I ran a couple of quick tests to see how this model would perform. To recap, the model I tested in this hands-on is powered by a 12th Gen Intel Core i5-12450H processor that has 16GB of RAM and a 512 SSD for storage.

Here's how it stacked up against some other models we'd tested earlier: Overall, the MateBook D 16 performed within expectations. It's quicker than notebooks powered by Intel's less 11th Gen Ice Lake U-series chips and was about on a par with the Yoga 9i which has a newer 12th Gen Core i7-1260P processor. However, it wasn't a match for ASUS's ZenBook 14X which has a more powerful Core i7-12700H processor. As for battery life, I ran the battery down by streaming video over Wi-Fi while performing other browser-based tasks. I was able to get seven and a half hours at maximum brightness, which I found to be an average time. If it's any consolation, 65W smartphone-style charger is small enough that it can pretty much be carried and always used. What is nice is that Huawei claims you can get 40% of charge with around 30 minutes of charging.

Based on first impressions, the Huawei MateBook D 16 appears to be a well-rounded and affordable notebook that's ideal for users on a tight budget. It isn't too heavy and although the 16-inch display isn't the sharpest or most vivid, it'll suffice for everyday needs. Performance is within expectations too for a notebook that's powered by a Core i5 H-series processor.

The MateBook D 16 is priced at S$1,298 and can be found at Huawei's official stores on Lazada and Shopee as well as in partner shops like Challenger or Courts.