With the launch of Microsoft's Windows 8 a mere two weeks away, manufacturers are starting to give us an idea of what devices we can expect for the new OS. In HP's case, today they revealed a total of eight new Windows 8 ready devices, more than half of which are touch-enabled. We were invited for a quick hands-on session with them, so read on to find out more. 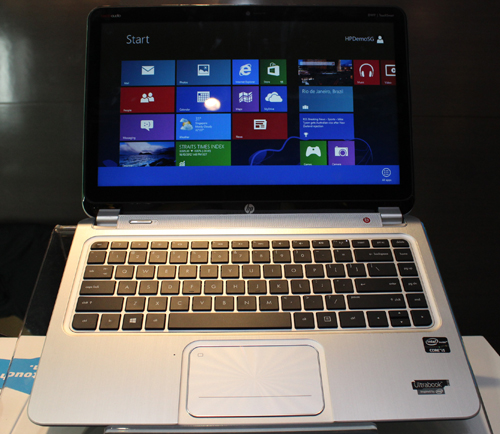 The flagship touch device for HP is definitely the new HP Envy X2. We had the privilege of a hands-on session with it in early September, and playing with it again today reinforced our belief that it is a very solid and well made device that will definitely appeal to folks looking to hop on the Windows 8 bandwagon.

Unfortunately, we have yet to receive additional information regarding its pricing and availability details, although we do know that it should arrive in late 2012. 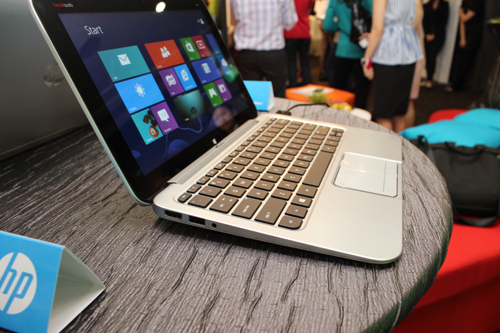 The HP Envy 4 Touchsmart Ultrabook is a touchscreen version of HP's Envy 4 Ultrabook released earlier this year. While the touchscreen is a nice addition, it does make the notebook quite a bit heavier and thicker as well. It will retail for $1399, and has been confirmed to reach our shores in late 2012. 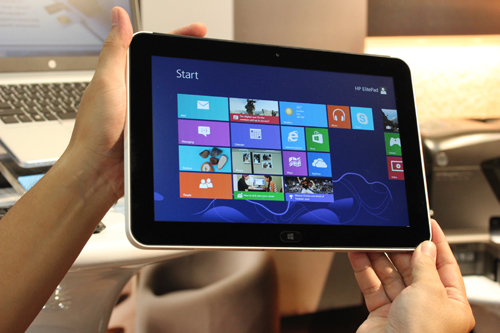 Last week, HP announced a Windows 8 tablet targeted at enterprise users, the 10.1-inch HP Elitepad 900. This tablet won't be available in Singapore until late January 2013, but we were lucky enough to get an early hands-on for some initial impressions. 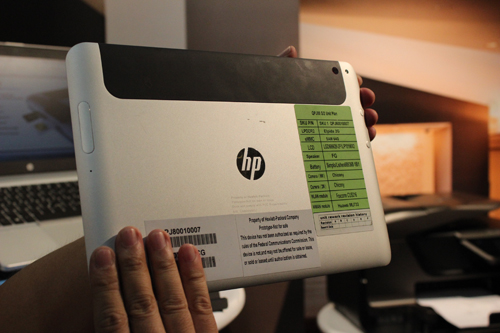 The Elitepad 900 is completely covered in aluminum which makes it feel very premium and robust. The tablet is only 9.2mm thick and weighs 680g, but because of its tapered body, it actually feels thinner and lighter than that.

The build quality of the Elitepad 900 is also very impressive - its compact form factor means that there was absolutely no flex whatsoever. Thanks to its “Elite” heritage, HP also claims that the Elitepad 900 has military grade durability against drops, vibration, dust, extreme temperatures and high altitude. While we weren't able to test those claims at HP's event, just by holding it, it certainly felt like there was some truth to those claims. 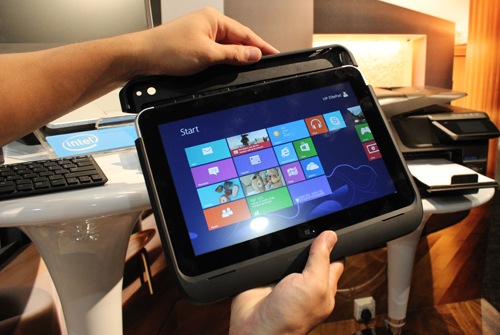 Thankfully, it’s also no slouch in terms of specifications. Its high-res 10.1-inch (1280 x 800 pixels resolution) multi-touch display is protected by the latest Corning Gorilla Glass 2, which is thinner than the original Gorilla Glass, but manages to retains the same high level of protection.

Under the hood, it’s running a next generation Intel Atom processor (with an onboard 533Mhz Intel GMA GPU), which was built specifically to power mobile devices such as the Elitepad 900. Combined with its 25 Whr battery, that means you can expect extra long battery life, and it might even last longer than some Ultrabooks. It’s also got 2GB of RAM and a maximum 64GB of storage capacity.

While it’s pretty exciting on its own, a host of accessories will also be available for the Elitepad 900. First and foremost, the HP Executive Tablet Pen, a powered stylus which lets users write on the tablet. We’re uncertain as to exactly what technology is powering the pen, but since it's powered, it’s definitely not something from Wacom.

There’s also a slim Bluetooth keyboard that, once connected, turns the Elitepad into a small but capable workstation and, like most tablets, there’s also the HP Elitepad docking station for additional connectivity. 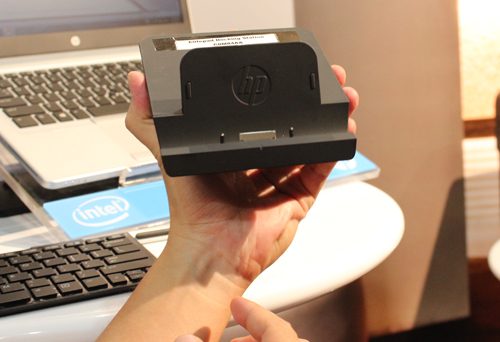 Another interesting device is the HP Elitepad Expansion Jacket. This accessory will be especially useful for users who travel often as, besides just protecting the tablet, it also features a removable battery that extends battery life by almost 80%.

On top of that, it also grants the Elitepad extra connectivity options, with two USB ports, an HDMI port and even a card reader onboard, making it extremely useful for road warriors who need to connect other devices to it. As a nice example of design synergy, the Elitepad will still fit into the Elitepad docking station, even with the Expansion Jacket on. 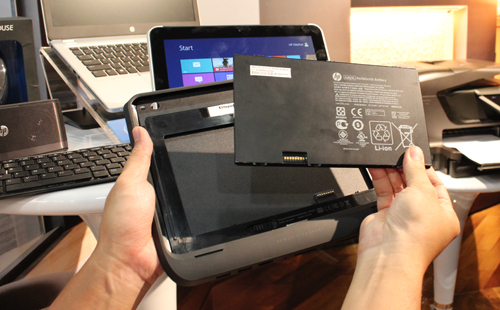 Pricing for the Elitepad 900 is unavailable at the moment, however we’ve been assured that it will be priced competitively against the competition. 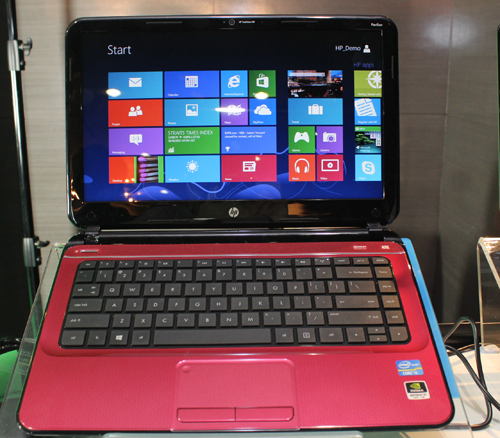 Rounding up the Windows 8 notebooks and tablets are HP's non-touchscreen Pavilion Sleekbooks that come in 14-inch and 15-inch variants, both of which will be available in either black or red. These slim notebooks aren’t as spectacular as the previous Windows 8 models revealed today, but it’s their prices that will get you all hot and bothered. 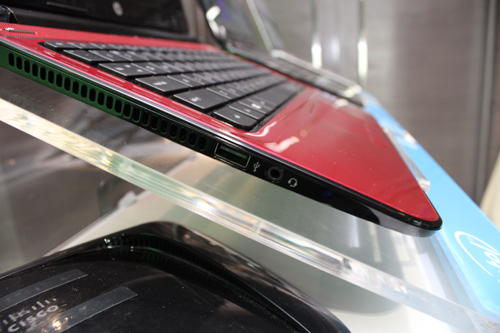 Like the HP Envy 4, users have the option of adding a discrete NVIDIA GPU into the mix for a little boost in gaming capabilities. It also supports up to a full terabyte of storage capacity to store all the media you want, making these not only very affordable but also very versatile multimedia notebooks.

Both models will be launching alongside Windows 8 on 26th October. 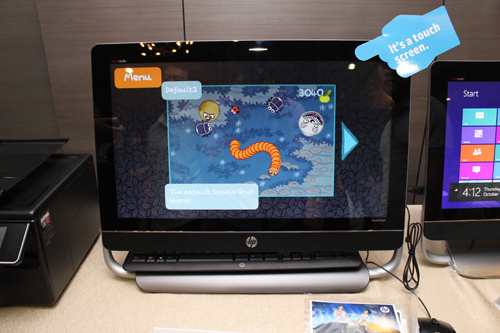 When HP attaches the 'Envy' branding to one of its notebooks, you can be sure that its meant to be at the top of the food chain. When it comes to desktops, it's no different. These 20-inch and 23-inch Envy Touchsmart AIO PCs currently serve as HP’s flagship touchscreen AIOs, and feature full edge-to-edge touchscreen glass displays capable of detecting up to 10 points at once, giving you a seamless touch experience whether you're playing games or working. 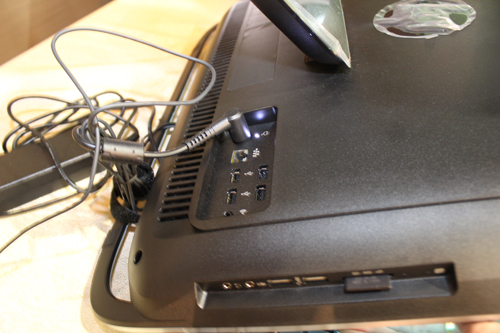 Each Touchsmart AIO can handle up to 3TB of storage space, and also comes with a 3rd generation Intel processor and AMD graphics. Users will also have the option of adding Expresscache and SSDs for an extra speed boost. The HP Envy Touchsmart AIO PCs will retail for $1199 (20-inch) and $1599 (23-inch). 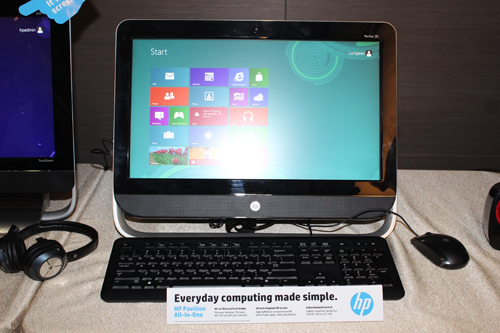 A little further down the pecking order is the HP Pavilion 20 AIO PC. This is the most affordable Windows 8 AIO in HP's line-up, as it doesn’t come with a touch-enabled display. What you do get however, is a 20-inch HD display, in a nicely designed, and fairly thin body, ideal for those with space constraints. We haven’t got the full specs at the moment, but it definitely won't be powerful as HP's Envy AIOs. You’re likely looking at only light gaming and multimedia usage for this one. The Pavilion 20 AIO PC will be available later this month for an appetizing $899, most likely after Microsoft’s Windows 8 launch on 26th October.

To recap, the HP Envy X2 will be available at the end of the year (no pricing details yet), while the Envy 4 Touchsmart Ultrabook will appear around the same period, and will cost S$1,399.

The HP Elitepad 900 will be retailing in January 2013, but its price has yet to be announced, while the HP Pavilion Sleekbooks will be available on the Windows 8 launch date of 26th October. The 14-inch Sleekbook will start at S$699 (AMD) and S$999 (Intel Core i5).