A Tegra with a Mean Graphics Core 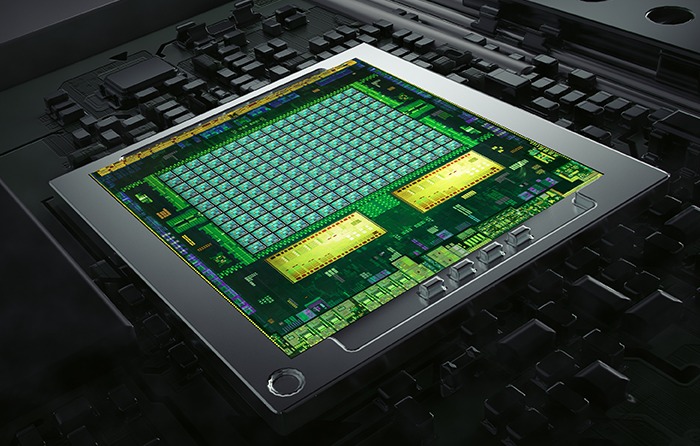 A Tegra with a Mean Graphics Core

Believe it or not, the NVIDIA Tegra K1 is a drastic change in direction for NVIDIA's mobile processor. Instead of just touting more main processing cores and higher clocks speeds, the Tegra K1 that just debuted hours ago at NVIDIA's CES 2014 press conference, focuses on its radically updated graphics sub-component that's now on par with capabilities of its desktop GPU. 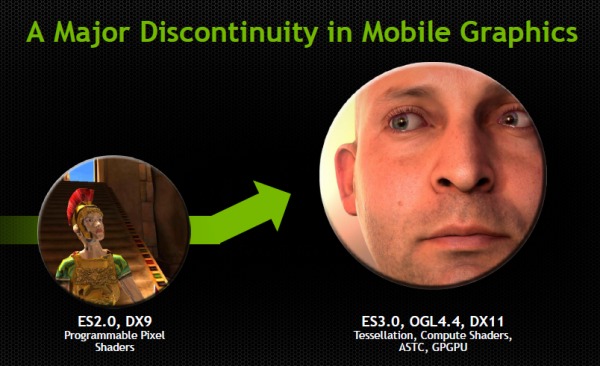 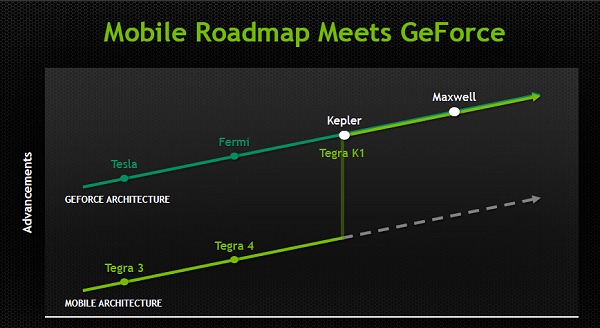 Kepler Graphics - The Star of the Show

As identified in the slide above, there's a distinct difference in gaming experience on a mobile device and that of your PC. After Tegra 4, NVIDIA had the option to incrementally update the mobile 72-core GeForce GPU within the Tegra 4 to give it more horsepower in the next iteration, which unfortunately wouldn't have made much of an impact as it's still supporting only lesser APIs that have been associated with mobility products. The other option is that NVIDIA lead the charge to consider a more radical approach to incorporate a superior GPU architecture (in this case, Kepler) in their next generation Tegra.

Now before you consider the obvious answer, consider the fact that a deskop GPU is design is engineered for a completely different power profile, efficiency and performance points. It's not as simple as cutting down the number of processing units within the GPU core to meet the intended mobility product's power profile. In fact, it's not possible unless the GPU architecture was designed and engineered for this purpose. To give you an idea of the discrepancy, this slide gives you a high-level overview of tremendous differences between a mobility device and a desktop device as far as power consumption is concerned:- 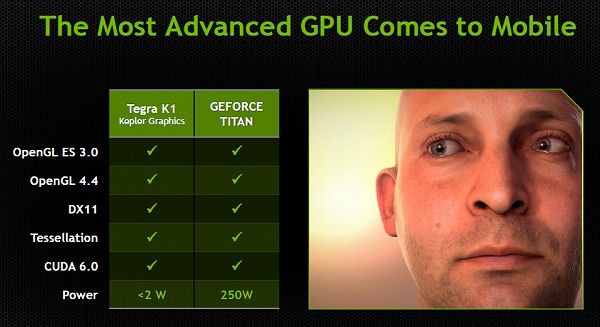 Having said that, the Kepler GPU microarchitecture wasn't designed to be mobility-centric from the very beginning, but somewhere along it development cycle, NVIDIA took a crucial and important stand to alter their development process such that their next GPU architecture can scale from mobile to workstation class. This would also mean no more maintaining two different GPU projects and all efforts will focus on one GPU lineup.

The end result is that the Kepler core was built to tackle every usage scenario that will scale from milliwatts to megawatts. No other GPU architecture is made with this in mind and the Tegra K1 is proud to be the first of them. This is why the latest edition of the Tegra is called K1 as it's based on the Kepler architecture - a tremendous leap for mobility products that are still entrenched with DirectX 9 level of gaming quality and programming via OpenGL ES 2.0.

Having new-age hardware features is just part of the equation, but the real impact of Kepler would be truly appreciated by game developers. Since the Tegra K1's graphics core is based on the Keppler architecture, APIs and development like NVIDIA Gameworks and others are readily usable on the Tegra K1. As such, there's nothing that the Tergra K1 can't run; including the entire Gameworks Library.

The beauty of having a graphics core that's similar in capabilities no matter the scale or size of the target product, in this case mobility devices and desktop hardware, is that game designers can develop for any major environment, API or target and not be concerned about having to re-tool the game for a dumbed down environment, which presents a lot of manpower costs for the conversion as well as wasted effort since certain graphical elements may not be seen on lesser equipped hardware. Furthermore, the developer doesn't need separate coding teams working on the same project simultaneously if its required for multi-platforms.

To understand what level of gaming realism is possible, just know that the Unreal 4 engine that was shown not long ago with high performance desktop hardware, can now run via OpenGL 4.4 on Android on the Tegra K1. Here are a handful of video examples we've captured of the reference Tegra K1 device tackle with ease:-

This is why the Tegra K1 can bring PC Gaming realism into the palm of your hands. OpenGL is now fully supported on any programming environment with the latest set of tools, thus making these examples and more possible. In the end, Tegra K1 helps consumers to experience higher quality games spawning across multiple hardware options. A perfect case of design once, publish on multiple platforms. 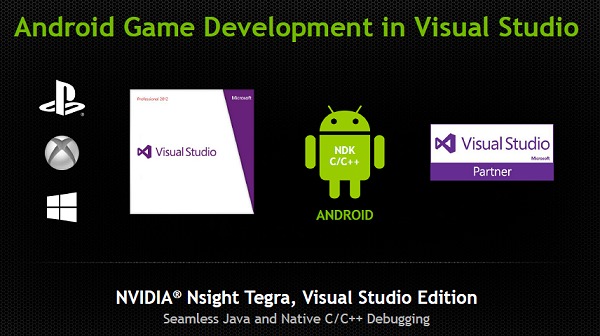 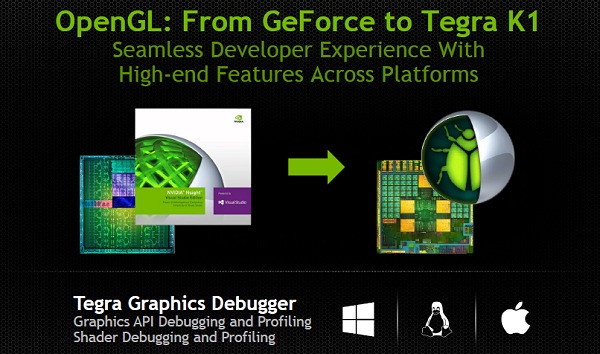 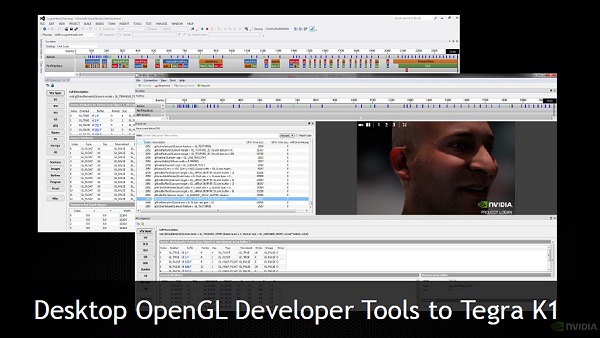 It's not just the development stage where this synergy works out. With a full Kepler GPU, the Tegra K1 is able to support real-time frame and code debugging. This comes in handy while troubleshooting apps or applications for optimal performance on mobile devices. NVIDIA assured us that the necessary software tools are now in development to catch up with the full debugging capabilities possible on the PC.

The DNA of Tegra K1 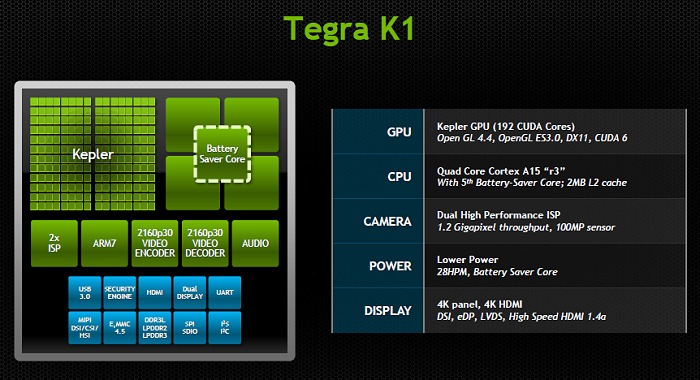 We've talked about the star of the Tegra K1, but not in-depth enough. But before we proceed to the next level of detail, now's a great time to keep stock of what makes up the Tegra K1. As seen in the slide above, the basic building blocks are identical to that of the Tegra 4. What's different on the K1 is that the blocks themselves are now updated as listed on the table summary above.

We'll be discussing each of them in detail over the next few pages.