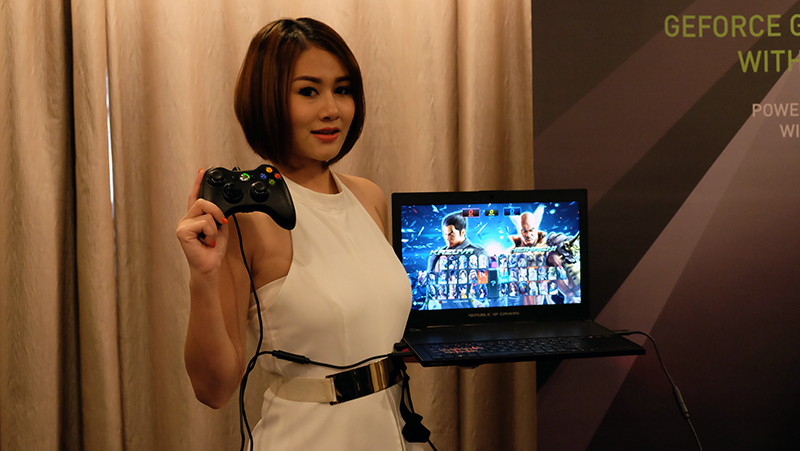 What do space rockets and NVIDIA Max-Q laptops have in common? As it turns out, a laser sharp focus on creating designs that can deliver under extreme conditions.

NVIDIA doesn’t want to put laptops in space, but it certainly wants to achieve the ideal in gaming laptop design, where machines are thin, powerful, and quiet.

The trio have long been tangled in a sticky web of trade-offs. A powerful laptop with the top GPU would be a beast, but it would also be as thick as a brick and be as heavy too. On the other hand, if you wanted to make a thin and portable system, you’d end up making painful concessions in terms of performance and noise.

NVIDIA’s Max-Q technology changes all that. At Computex 2017, NVIDIA announced that it is partnering with OEMs to make high-performance laptops that are also thin, light, and quiet.

This translates into a ton of engineering work, and includes things like advanced thermal solutions, optimized in-game settings, and more efficient power regulation.

Among the first to debut with Max-Q was the ASUS ROG Zephyrus, a stunning 15.6-inch notebook that measures only 17.9mm thick, weighs 2.2kg, but still features an NVIDIA GeForce GTX 1080 graphics engine.

In aerospace engineering, Max-Q refers to maximum dynamic pressure, and is the point where pressure on a craft such as a rocket peaks in tandem with increasing velocity. After that point, pressure drops off as a result of the decreasing density of air as altitude increases.

Rockets are designed to withstand these stressful Max-Q conditions, and NVIDIA co-opted the term to refer to notebooks that have been built to similarly perform under the most trying conditions.

But how is NVIDIA fitting an 180-watt GPU into a laptop that provides only 90 watts of power? The operative word in Max-Q designs is efficiency. These aren’t notebooks tooled for maximum performance, and Max-Q laptops take a small performance hit of around 10 per cent.

Instead, NVIDIA and its hardware partners have worked to identify the point at which efficiency is the highest. The guiding principle at the heart of their efforts is that peak performance is not peak efficiency.

Beyond a certain point, increments in power consumption result in increasingly smaller gains in performance that are hardly worth the higher power draw, as seen in the graph below. 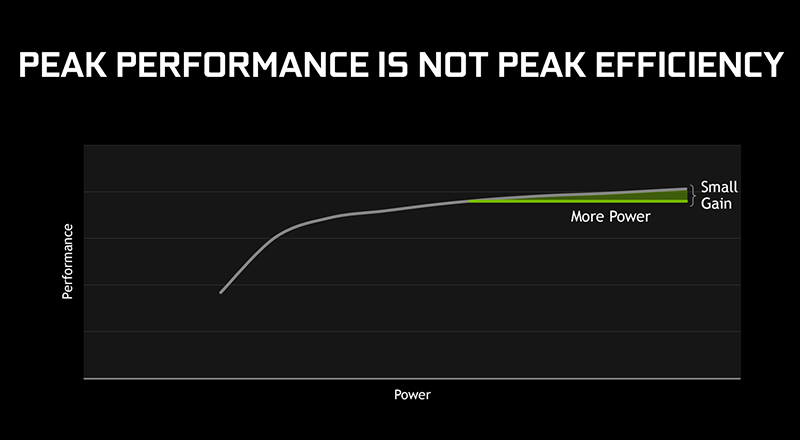 Furthermore, once you change the Y-axis to plot for incremental instead of raw performance, the drop off in efficiency becomes even clearer. There just comes a point where performance increments shrink as power increases, and it makes no more sense to continue in that direction, which would also necessitate bulky designs and hefty cooling apparatus to deal with the increased power. 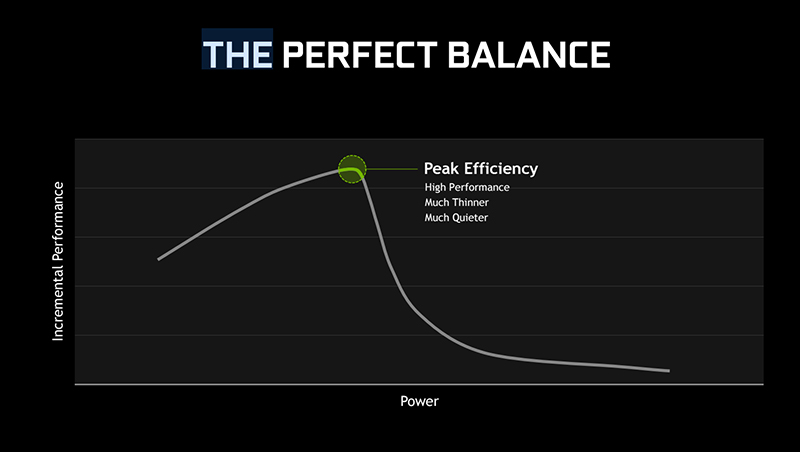 NVIDIA is shooting for this point where efficiency peaks, and this approach has enabled its partners to make laptops that are almost 70 per cent more powerful than before, thanks to the ability to cram a GeForce GTX 1080 into chassis that would previously have only held a GeForce GTX 1060.

That’s not all however, and this zeroing in on peak efficiency is combined with novel cooling solutions – such as the bottom panel of the ASUS ROG Zephyrus that opens up for more ventilation – and better voltage regulators. 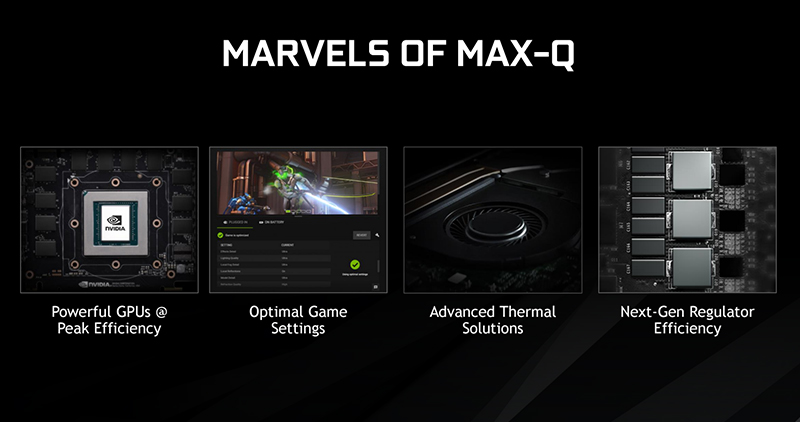 These optimizations apply to individual games as well, and a similar approach has been taken with regard to in-game graphics settings. NVIDIA calls this feature WhisperMode, and it helps Max-Q laptops run more quietly. In fact, the company has targeted the maximum noise level at 40dbA, which in a chart of comparative noise levels, has been lumped together with sounds like bird calls.

In other words, that’s barely a peep compared to the storm that some gaming laptops can whip up.

WhisperMode applies the most power-efficient graphics settings and intelligently paces the game’s frame rate, thus striking a balance between visual quality, performance and noise. Over 400 games have been profiled, so there’s a good chance that your favorite title will be able to take advantage of it. 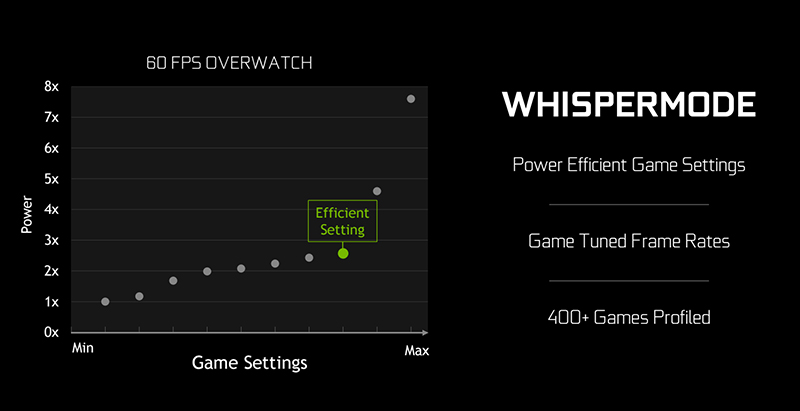 For all the talk about how the technology works, you’re probably more interested in seeing it in action. NVIDIA says Max-Q laptops will be available to buy starting from 27 June, and major brands like Acer, Alienware, ASUS, Gigabyte, HP, Lenovo, and MSI are already confirmed to have Max-Q laptops in the works.

At Computex, we also had the chance to spend more time with the ASUS ROG Zephyrus, and you can head to our hands-on article to find out more about that laptop. 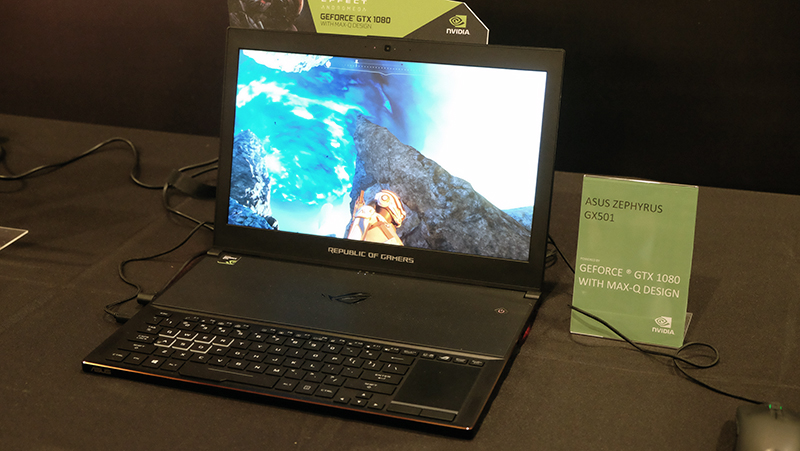 That said, we’ve also caught wind of other models like the Aorus X5 MD and the updated HP Omen 15. The former is shaping up to be very impressive, with an overclockable Intel Core i7-7820HK (2.9GHz, 8MB L3 cache) processor and NVIDIA GeForce GTX 1080.

At an event in Bangkok to talk more about its Max-Q technology, NVIDIA also showed off two more Max-Q laptops – the MSI GS63VR Stealth Pro and the Clevo P950HR.

Both of them feature an NVIDIA GeForce GTX 1070, and the Clevo notebook is actually the reference model that the Aftershock PRIME-15 is based on (you can expect a Max-Q version of that soon). 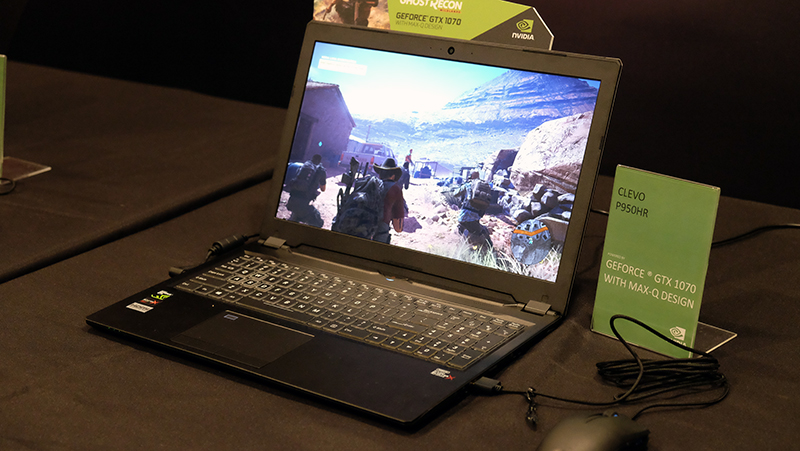 The new MSI GS63VR Stealth Pro is an evolution of the GeForce GTX 1060-equipped model we reviewed earlier this year, and it uses the same 17.7mm-thin chassis. The weight is up slightly to 1.9kg, but it is still very light for what it offers. 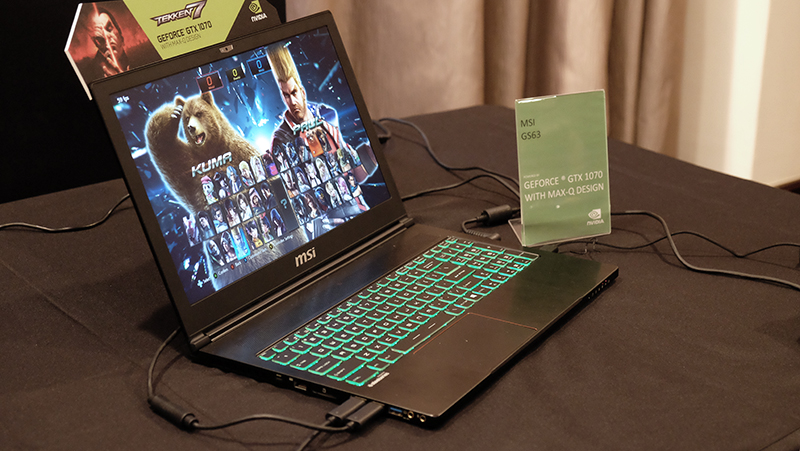 It is cooled by MSI’s Cooler Boost Trinity cooling solution, which comprises three 41-blade Whirlwind fans and five heat pipes to whisk heat away from the components. The CPU and GPU also each get their own thermal module, but more resources are dedicated to cooling the GPU, with two of the three fans doing just that.