PSA: Here's how to fix your M1 Mac if you face reinstallation errors
Event Coverage 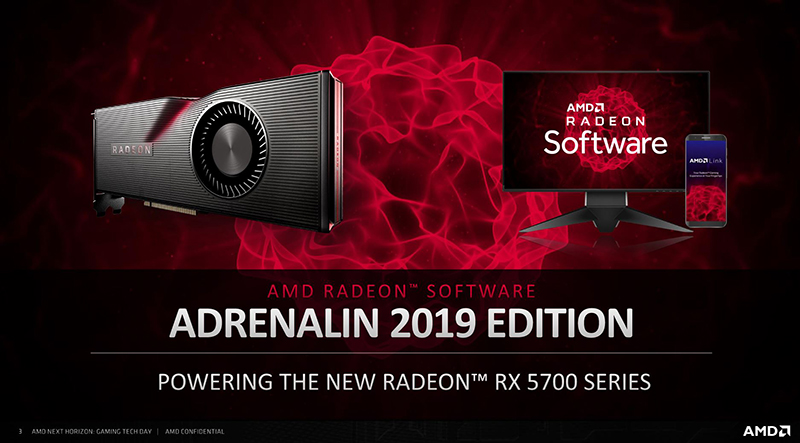 AMD's got a brand new version of its Adrenalin 2019 Edition software to go with its new Navi-based Radeon RX 5700 series cards. Version 19.7.1 brings several new features to improve visual quality and performance in games and reduce power consumption. It will be available to download come 7 July, alongside the launch of the new Radeon RX 5700 XT and Radeon RX 5700.

The latter two are the focus of its Adrenalin software. Game fidelity mostly centers around how good a game looks, comprising things like advanced anti-liasing techniques and physics compute, while game dynamism involves aspects of gameplay like how smooth and responsive it feels. However, most of the features here won't be restricted to Navi, and you can enjoy them on existing Radeon GPUs.

One of the biggest features is something called Radeon Anti-lag, a gloriously simple name that does exactly what it says. It's supposed to lower your click-to-response time, or the latency between your GPU and monitor.

In general, having higher frames per second will give you lower latency, but Radeon Anti-lag simulates this effect without actually necessitating the required performance. The idea behind it is to decouple the frame rate from the input lag, such that the latter is no longer dependent on the former. In a demonstration on site, AMD showed how latency was cut from roughly 56ms to 44.8ms, compared to the 59ms on the GeForce RTX 2070.

Usually, your CPU will wait for your GPU to draw say, two frames, before it reacts to your click, but Radeon Anti-lag lets it selectively get rid of almost an entire frame so you get a response quicker. 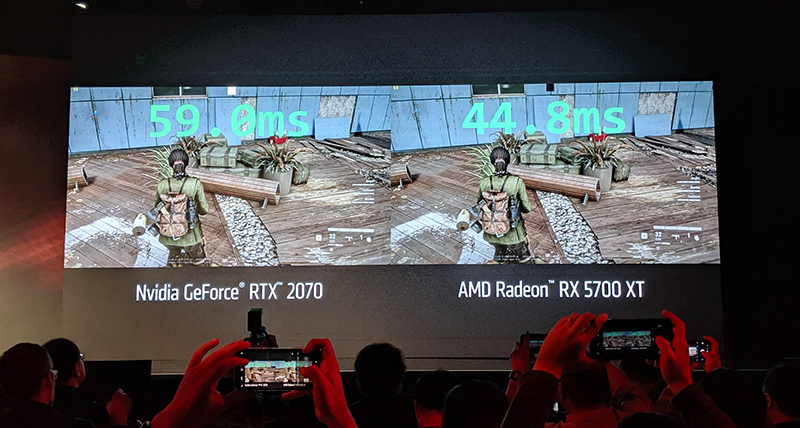 Some of the latency reductions even translate into an advantage of an entire frame, and while casual players probably won't notice the difference, it's not hard to see why professionals would want it. That said, you'll probably want to wait for numbers from reviewers to get a better idea of how well the feature actually works. As part of its push to make games look prettier, AMD is also introducing something called FidelityFX, an open-source image quality toolkit that developers can take advantage of.

It employs contrast adaptive sharpening (CAS), which is designed to draw out detail in areas of low contrast while minimizing artifacts. It works well with just about any form of edge anti-aliasing and can improve quality at a low cost to performance. This is sort of AMD's answer to NVIDIA's DLSS, along with Radeon Image Sharpening, except that it isn't specific to ray-tracing scenarios. In addition, FidelityFX supports optional upsampling for high-resolution displays. According to AMD, it runs best on Navi- and Vega-based GPUs with Rapid Packed Math, which employs precision switching to pack two FP16 operations into a single FP32 operation. This reduces precision but increases speed, which is what's really crucial when you want to render additional detail without taking too much of a performance hit.

The company says that many developers are already taking steps to integrate FidelityFX into future games, including Ubisoft, WB Games, and Gearbox Software. Compared to Radeon Image Sharpening, which takes the form of a simple on and off toggle in the Adrenalin software, FidelityFX will also give developers more control over in-game visuals. 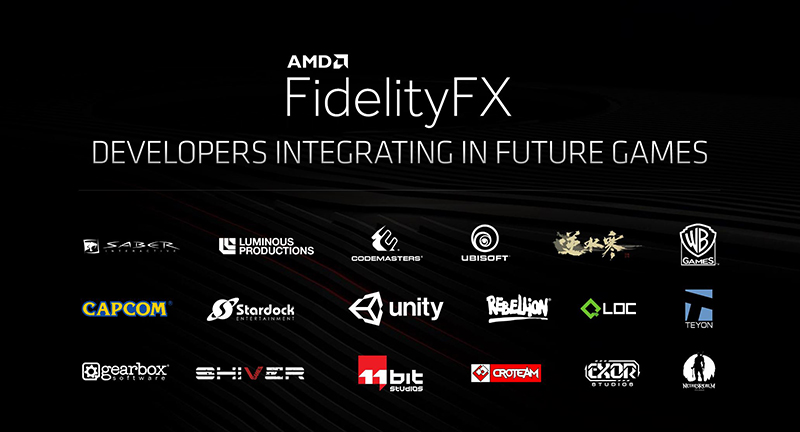 Another feature that is supposed to enhance image quality is Radeon Image Sharpening, which helps bring textures into focus and draw out greater detail, again with minimal impact on performance. It works similarly to FidelityFX, except that you can enable it directly from Adrenalin. The greater detail also means that you should feel like you're playing at something close to a native 4K resolution, without the performance impact of such a high resolution.

However, this feature is currently exclusive to the Radeon RX 5700 series and, oddly enough, will only work with DirectX 9, 10, 12 and Vulkan on Windows 10. Hopefully, FidelityFX can help plug the gaps in terms of support for this feature. 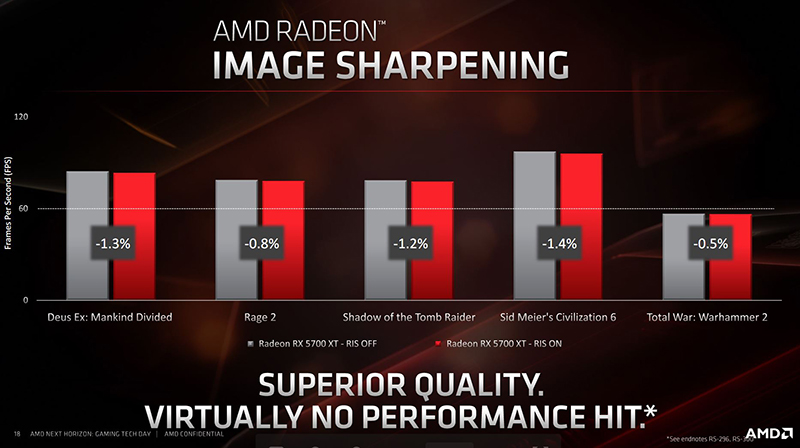 In the slide below, you can see how sections of the rock face appear to have greater depth to the applied texture and improved detail with image sharpening turned on, especially on the area just below the bush on the left. You also won't have to wait for developers to catch on with this one as it already supports thousands of games, according to AMD. The list currently includes plenty of big titles both old and new, such as Civilization VI, World of Warcraft, Battlefield V, Tom Clancy's The Division 2, Metro Exodus, Shadow of the Tomb Raider, and many more.

To cap things off, Radeon Chill is getting more powerful again. Chill works by scaling down GPU usage during less intensive scenes, so it helps you save power. However, it now supports display-aware tuning, which means you can set frame rate caps to match that of your monitor's refresh rate. This will work with fixed or variable refresh rate monitors, and AMD says this can enable up to 2.5x more power savings than before. 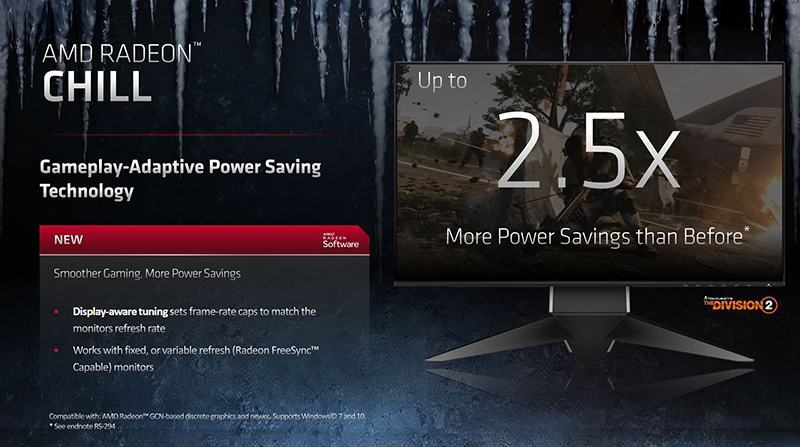 Elsewhere, there are various quality-of-life improvements such as a new automatic low latency mode that will let your GPU tell the TV to enter a low-latency gaming mode automatically.

You'll also be able to create, save, and load custom settings and configurations more easily thanks to something called Settings Snapshot. On top of that, Radeon WattMan is getting a UI upgrade with a new power meter and summary readout of auto-overclocking changes.

The latest version of Adrenalin also makes it possible to stream games from your PC across an even wider range of platforms than before. Radeon ReLive adds support for both Apple TV and Android TV, in addition to one-tap connection with the AMD Link mobile app, which already lets you stream games and video from your PC to your mobile phone or tablet.