We tested each card on the following graphics testbed:

We also tested all the cards with NVIDIA GeForce drivers version 353.30.

With a detailed performance preview of the GPU's capability, we ran the following reduced set of real-world and synthetic benchmarks for this shootout:

We used the Fire Strike Extreme test in 3DMark 2013 for our power and temperature tests.

As expected, the ASUS Strix GeForce GTX 980 Ti came ahead here thanks to its high factory overclock, which was the highest of all the cards. It was on average approximately 3% faster than the next best performer, the MSI GeForce GTX 980 Ti Gaming 6G, in all three 3DMark benchmarks.

The cards were all within a couple of frames of each other on Crysis 3, with the ASUS and MSI again leading the race. Hard figures aside, we’d be hard pressed to say that there really isn’t a tangible difference between the cards when it comes to real world performance, so we’re better off looking to other performance metrics like overclocking performance, temperature, and power to determine the better card. 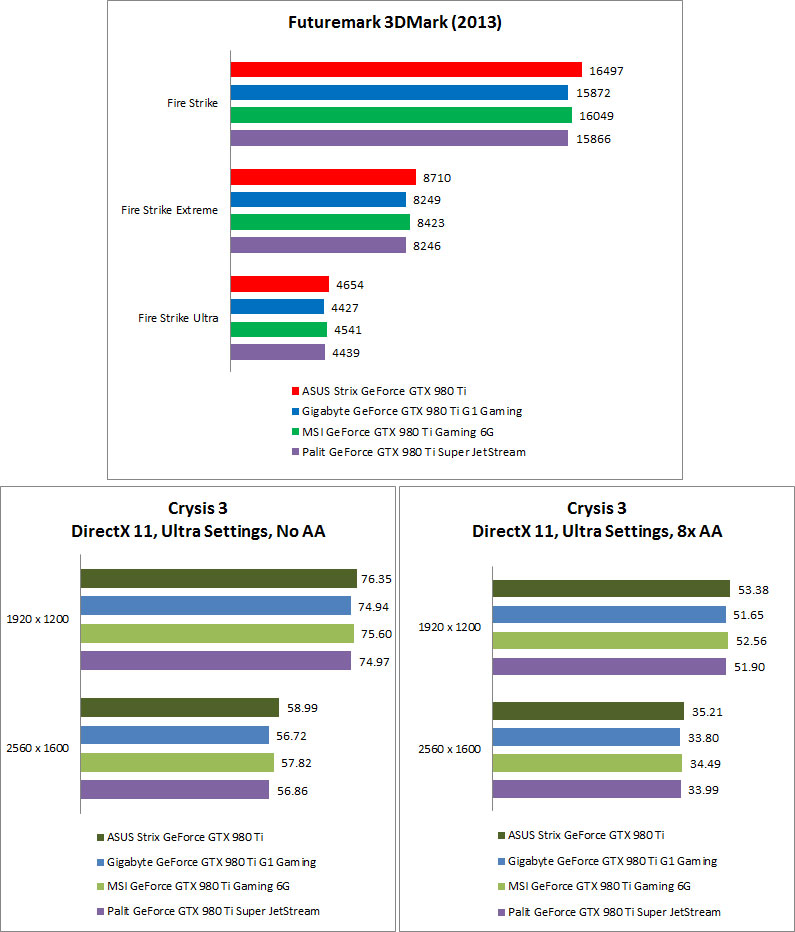 The ASUS card proved to be the most capable overclocker, achieving a maximum base clock speed of 1296MHz (boost clock: 1397MHz) and effective memory clock of 7425MHz. This resulted in a less-than 2% gain in 3DMark Fire Strike, partly due to the high base clock speed to begin with.

The Gigabyte card evinced the most appreciable gain in our overclocking tests. We were able to achieve a clock speed of 1292MHz (boost clock: 1381MHz) and memory clock of 7260MHz, up from factory speeds of 1152MHz and 7012MHz respectively. This translated into a just over 5% gain in performance in 3DMark Fire Strike, which widened to a 9% improvement in Fire Strike Ultra.

The Palit card was the poorest performer here, perhaps due to power limitations arising from its use of a 6-pin and 8-pin connector instead of dual 8-pin PCIe connectors. In fact, the overclocked Palit card was essentially performing at the same level of an out-of-the-box ASUS Strix GeForce GTX 980 Ti graphics card. 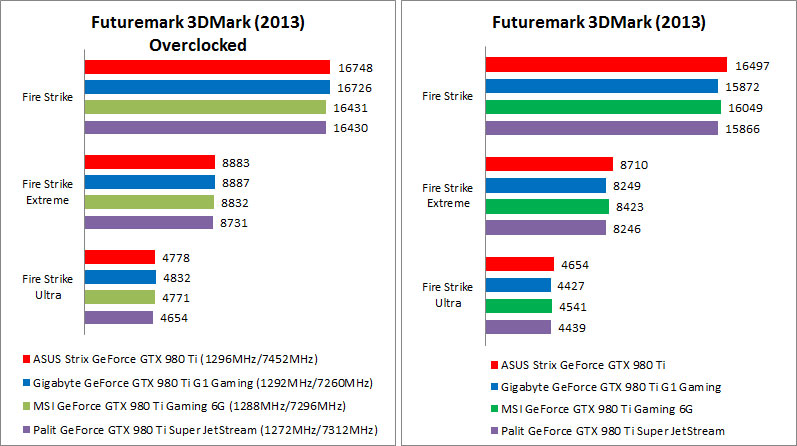 While the high temperatures and power consumption of the ASUS card can partly be accounted for by its higher factory overclocks, MSI’s Twin Frozr V cooler demonstrates that sometimes less is more. It also just managed to inch out the Gigabyte card in the temperature department, which speaks volumes of the capabilities of the Twin Frozr V cooler given that the Gigabyte card is clocked lower and has three fans.

The Palit JetStream cooler also disappointed here, with the card posting a temperature of 71ºC despite having the same clock speeds as the Gigabyte card. 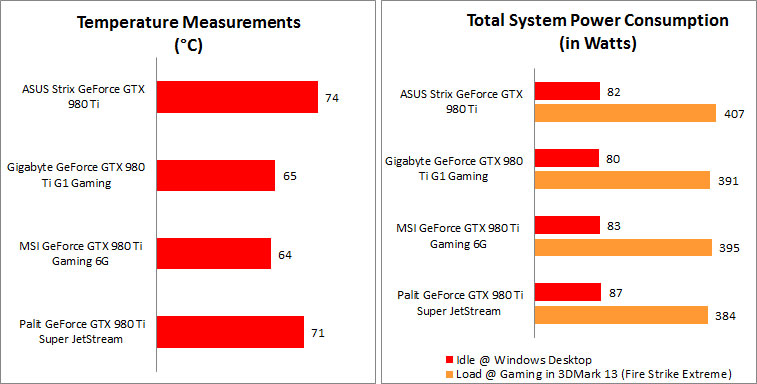