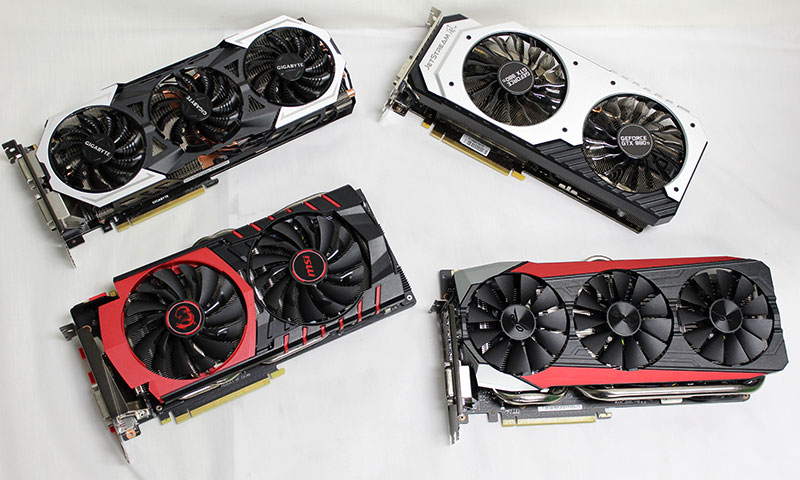 In the rarefied echelons of the more-than S$1,000 graphics card market, how much of a difference is there among custom cards from different manufacturers? Even though the GeForce GTX 980 Ti is situated firmly in the ultra-enthusiast segment of the market, NVIDIA has allowed add-in card manufacturers to implement custom board designs to differentiate their own cards.

Our review of the NVIDIA GeForce GTX 980 Ti showed the card to be a worthy alternative to the GeForce GTX Titan X. In fact, its performance was just a hair’s breadth away from what the most powerful single-GPU card available on the market was dishing out. And when combined with its US$649 launch price, it was an even more attractive option vis-à-vis the US$999 Titan X.

Of course, that hasn't stopped custom card manufacturers from working to improve on an already great card. We’ve rounded up custom versions of the GeForce GTX 980 Ti – complete with proprietary coolers, factory overclocks, and stylish backplates – from the likes of ASUS, Gigabyte, MSI, and Palit to find out just which one has hit on the best formula. 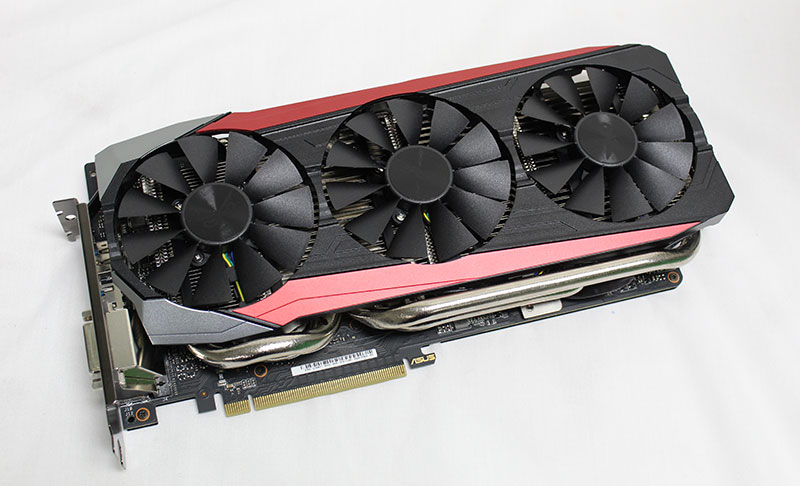 ASUS has made clever use of the bold red accents on the cooling shroud to create the illusion that the card tapers toward the rear, when in actual fact it is the same width throughout.

The DirectCU III cooler utilizes a triple-fan design, with each fan featuring something ASUS calls a wing-blade design that serves to increase airflow and static pressure to drive air through the heatsink fins. And has become de rigueur on most custom coolers today, the fans are capable of powering down entirely while under less demanding workloads. Naturally, this means that you won’t have to put up with any incessant whirring when you’re trying to get some real work done. 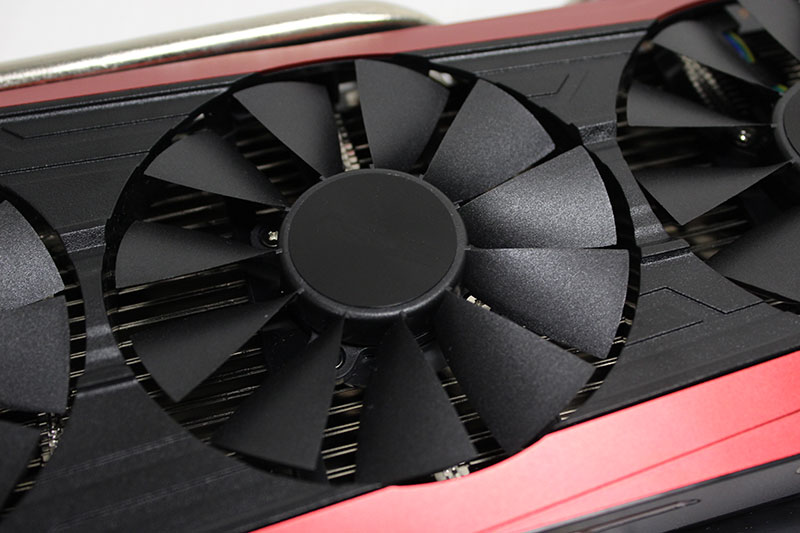 The card comes with some impressive clock speeds right out of the box. It features the highest factory overclock out of all our tested cards, with a core clock of 1216MHz and boost clock of 1317MHz in OC mode. In fact, it is the only card of the lot to go over 1200MHz at unboxing. In Gaming mode, the clock speeds are slightly lower at a 1190MHz base clock and 1291MHz boost clock. 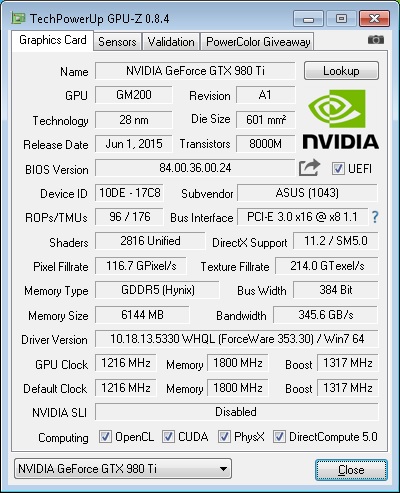 But as we’ll see in the results section later, the higher clock speeds mean great things for performance, though not quite as much for temperature and power consumption.

As if to reassure you that some heavy-duty cooling apparatus is indeed being used to cool this beast of a card, the ASUS Strix GeForce GTX 980 Ti has dual 10mm heatpipes that stick out quite prominently.

The card features a fairly standard array of display connectors round the back, comprising one DVI-D port, three DisplayPort outputs, and one HDMI connector.

Finally, a brushed metal backplate adds structural rigidity to the card. But instead of having a backplate that covers every inch of the PCB, ASUS has left a cutout for the GPU itself. It has also gone with a striking red metal plate to provide dedicated support to the GPU. Furthermore, it shows off its Super Alloy II capacitors through smaller cutouts on the backplate. 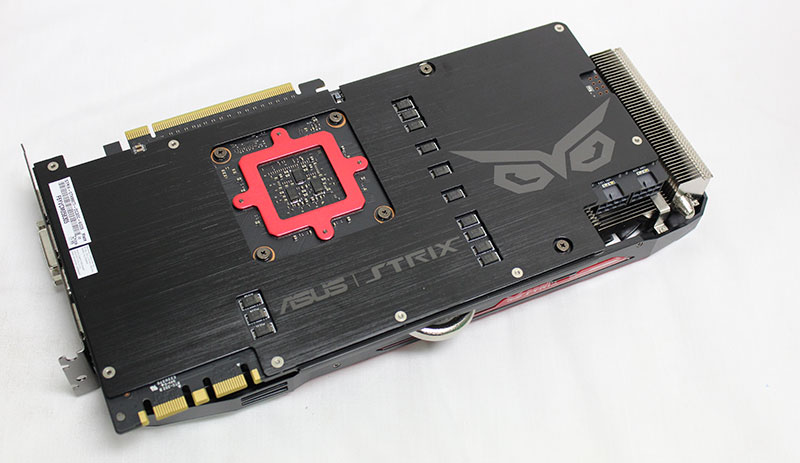 Power is delivered via two 8-pin PCIe connectors, up from the single 6-pin and 8-pin connectors on the reference card. Two LED lights located above the PCIe connectors will also glow white when a successful connection has been established, which will help you rule out loose connections when troubleshooting. 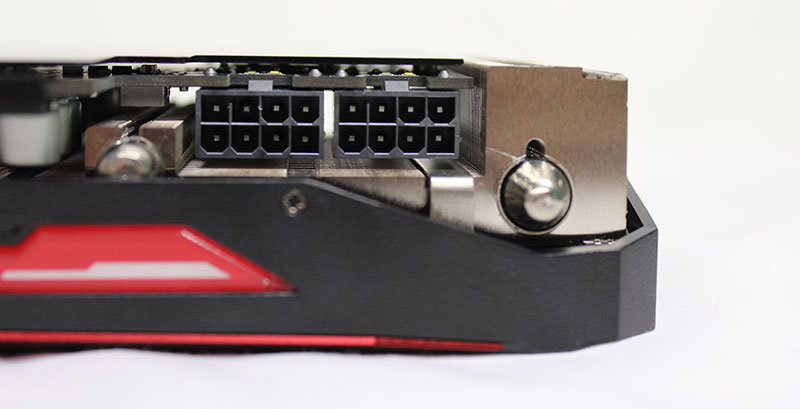 With more power to draw from, the card is thus able to achieve higher overclocks than the reference card.

Overclocking capability is further helped along by the use of a 14 (12+2)-phase power delivery. According to ASUS, production of the card is also completely automated, which supposedly helps enforce more stringent quality controls and consistent standards. It is dubbing this process ASUS Auto-Extreme.

And finally for a more mundane consideration – physical dimensions. At 30.5 x 15.22 x 3.98cm, the ASUS card, alongside Gigabyte’s offering, is quite long, so you should definitely check if you have sufficient clearance in your chassis. 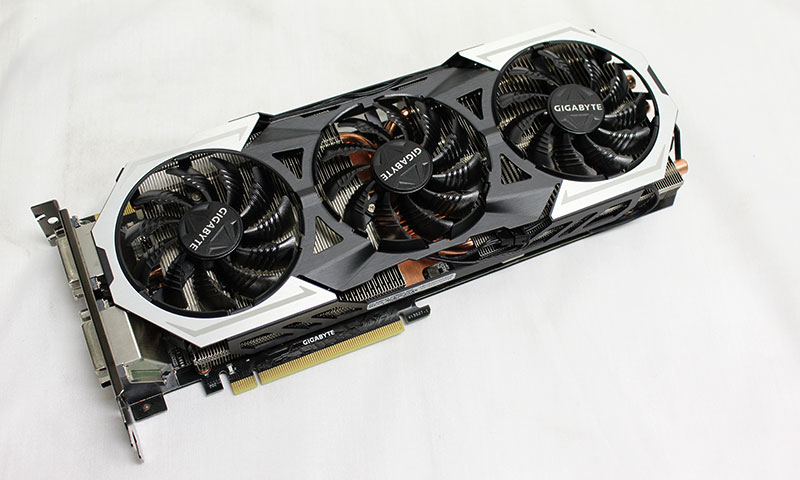 The Gigabyte GeForce GTX 980 Ti G1 Gaming sports Gigabyte’s signature triple-fan WindForce cooler. However, there have been some slight aesthetic tweaks to this particular version of the WindForce cooler. Instead of the stealth, all-black design we’re used to, Gigabyte has opted for a copious dash of silver around the edges of the fan shroud.

Each individual WindForce fan features five raised ridges and a triangular protrusion from the inner edge of the fan blade. This is a fairly distinctive design, and it isn’t just for show. Gigabyte says that it helps to increase cooling capacity, presumably by increasing airflow and directing air more efficiently through the heatsink fins. 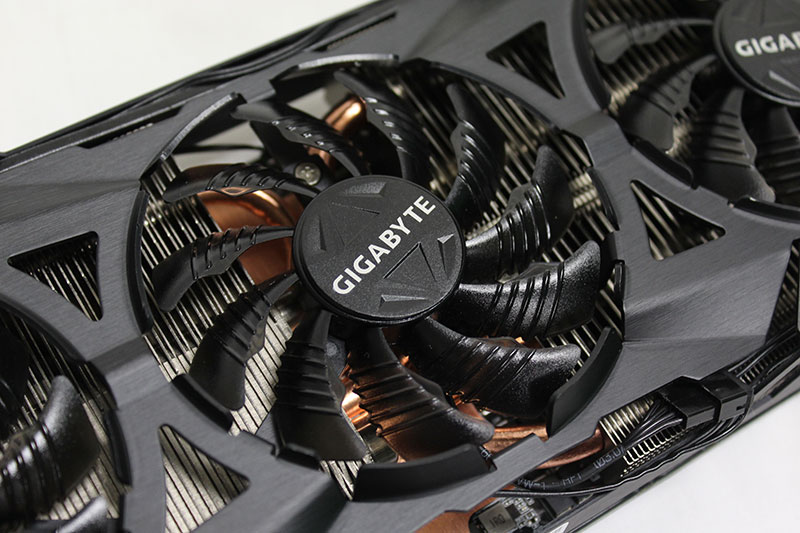 In addition, the WindForce cooler is equipped with five 8mm and one 6mm composite copper heatpipes that are in direct contact with the GPU to help with heat dissipation. However, these feature less egregiously in the cooler’s design than the ASUS card and are mostly tucked within the cooling apparatus.

The Gigabyte card ships out of the box in Gaming mode, with a base clock of 1152MHz and boost clock of 1241MHz. There is an OC mode available, which bumps the speeds up to a 1190MHz base clock and 1291MHz boost clock. 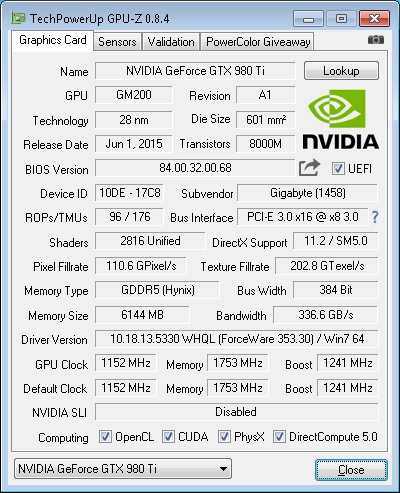 One standout feature of the card is the addition of one more DVI-D port at the card’s rear.

It will support Gigabyte’s Flex display technology, which allows to card to output to four monitors at one time. While the NVIDIA GeForce GTX 980 Ti can also support up to four displays, the additional DVI-D port will give users more freedom when it comes to which monitors and display outputs to use.

For such a long card (30.9 x 13.5 x 4.2cm), the inclusion of a rigid brushed metal backplate adds much-needed structural support. Of course, no aspect of such a gaming-oriented product would be complete without some design flourishes, and the backplate features stylized cutouts that expose the PCB for a more aggressive look. 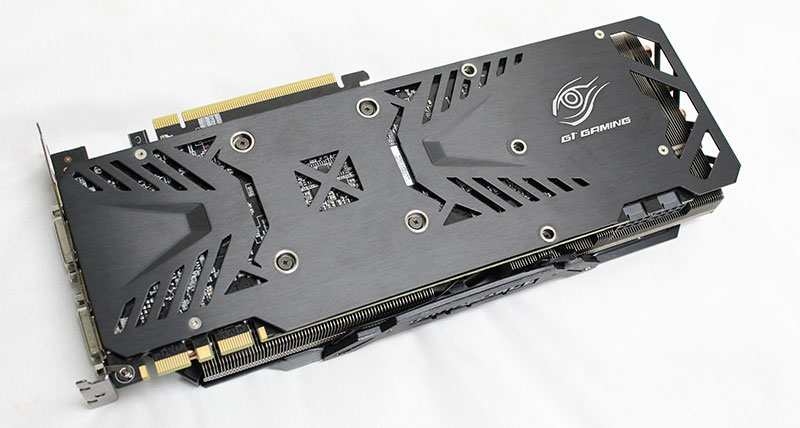 And like all the other cards in this shootout – with the exception of the Palit card – the Gigabyte GeForce GTX 980 Ti G1 Gaming is powered by two 8-pin PCIe connectors.

The card is also produced using something Gigabyte calls GPU Gauntlet Sorting. Fancy marketing jargon aside, what this theoretically means is that the GPU chips have been cherry-picked for power efficiency to enable better overclocking capability.

In fact, there might be something to this after all as the Gigabyte card achieved the highest overclock relative to its base speed out of all the cards. More details in our performance report on the following page. 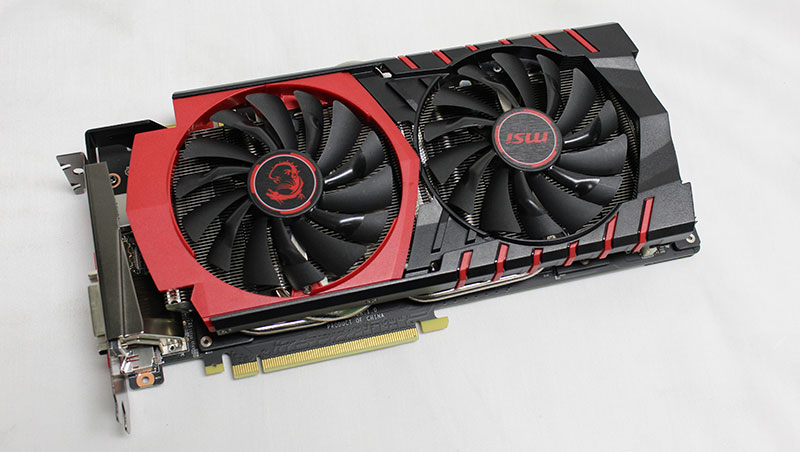 We’re not quite sold on using more fans over fewer, larger ones and we prefer MSI’s implementation. Two fans also means that the card is shorter – it measures 26.9 x 14 x 4cm – and less unwieldy to install. 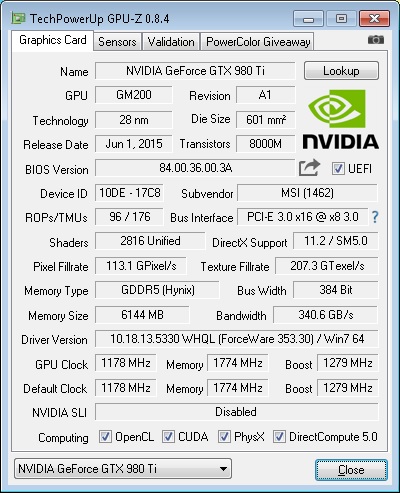 The Twin Frozr V cooler itself is decked out in the black-and-red color scheme that we’ve been used to seeing on many MSI cards. The dual Torx fans have a prominent raised section in the middle of the fan blade that MSI says helps to increase airflow to the heatsink.

As expected, MSI also has its own technology to stop the fans from spinning during low workloads, called Zero Frozr. In addition, the fans are able to work independent of one another, so don’t be alarmed if you only see one of them spinning! This effectively allows the card a finer level of control over cooling and noise levels. 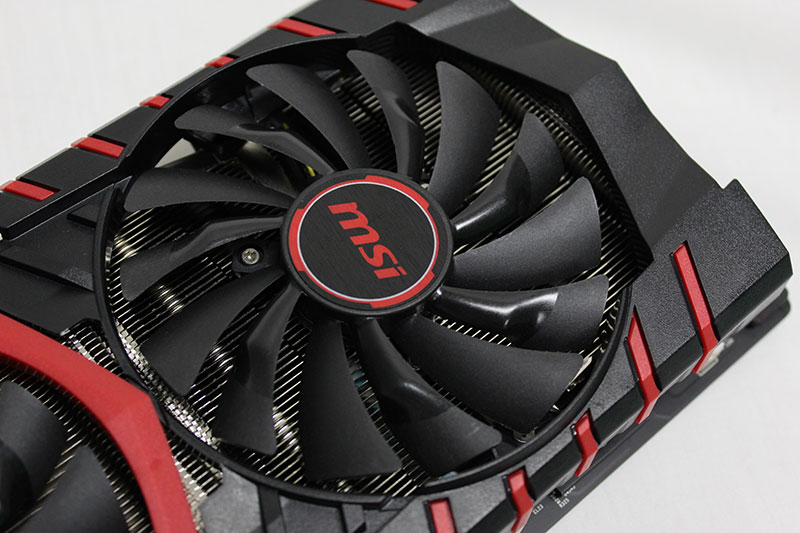 A couple of 8mm heatpipes can also be seen clearly from the card’s side. According to MSI, the heatpipes are laid out in such a way that reduces the length of unused heatpipe, thus improving cooling efficiency. In addition, the MSI dragon insignia on the card’s side can be configured from up to five different lighting modes in the MSI Gaming App to suit your system’s overall aesthetic.

The backplate itself is an almost solid slab over the card’s PCB. It is the only one in the shootout to not feature a brushed finish, instead opting for a matte veneer that is still quite slick. There’s also a subtle dragon logo emblazoned on one side. 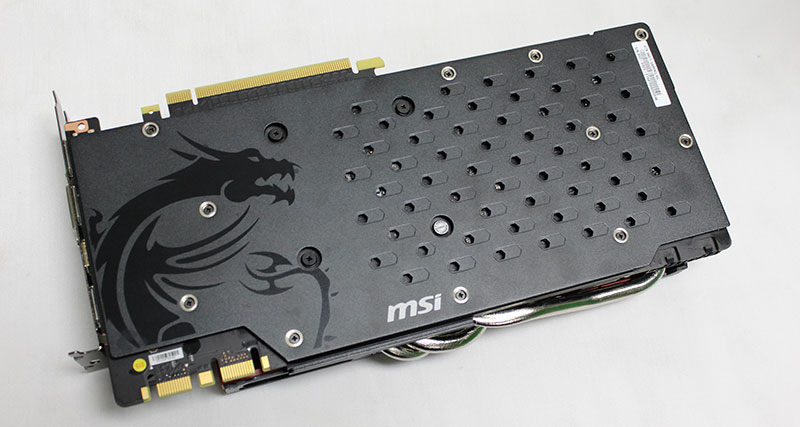 Display connectors are a similarly bog-standard affair with one DVI-I port, three DisplayPort connectors, and a single HDMI output. 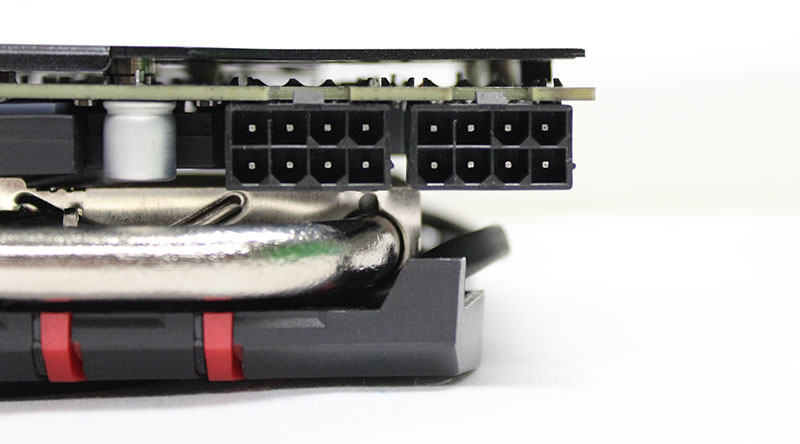 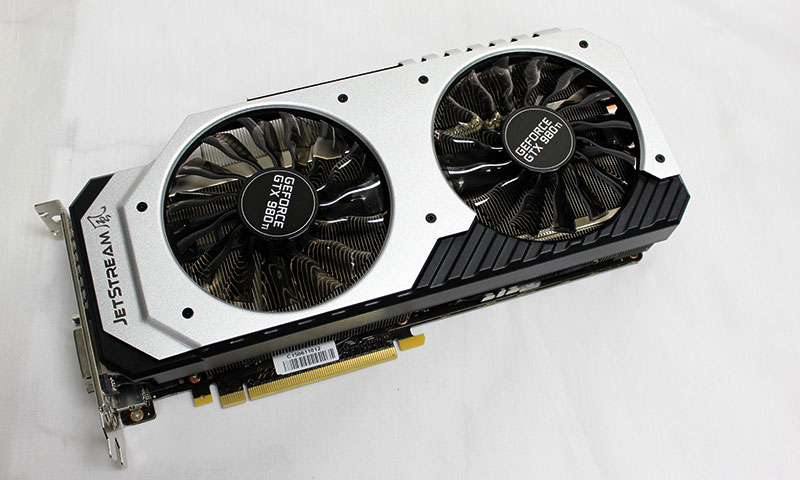 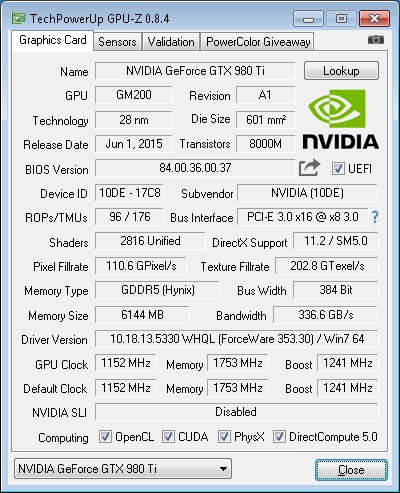 Palit also appears to be the only card of the lot that only comes with one mode out of the box. So if you’d like to overclock the card for performance or lower the clock speeds for less noise, your only recourse will be a manual overclocking software like MSI Afterburner.

To our eyes, the dual-fan JetStream cooling shroud is the plainest of the lot, with a smooth silver exterior and a dash of black at the edge.

The JetStream insignia is inscribed on the shroud toward the card’s rear, together with the Chinese character for wind.

With so much emphasis being placed on cooling and airflow in the naming and aesthetic of the card, the 100mm fans naturally also feature design tweaks to increase static pressure and airflow. Palit refers to this as its TurboFan Blade design. 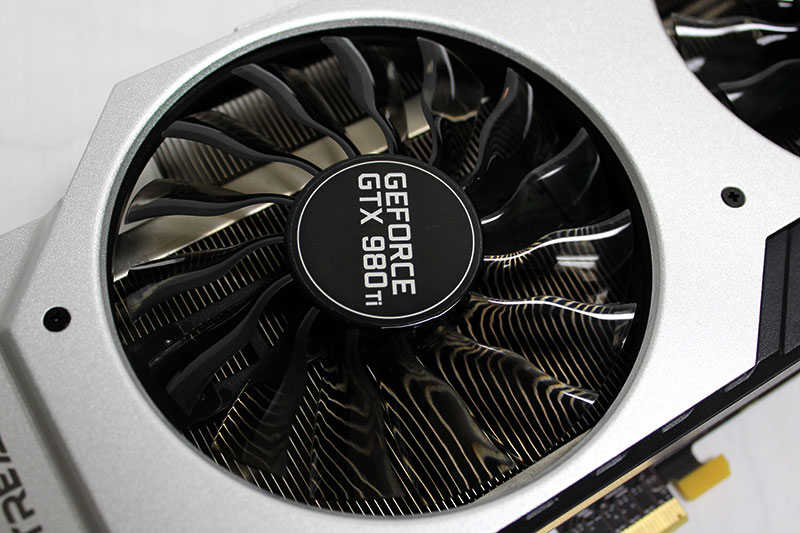 According to Palit, the fans rotate in opposite directions to reduce conflicting air currents and improve airflow.The fans are also capable of powering down when under less demanding workloads. As a result, there’s really little to differentiate the cards when it comes to acoustic performance during low workload.

You may also have noticed that the fans are slightly translucent, which allow the built-in LEDs to shine through.

A brushed metal backplate protects the PCB of the card. The design is also reminiscent of what we saw on the ASUS card, where there was a large cutout for the GPU and a dedicated reinforcement brace. 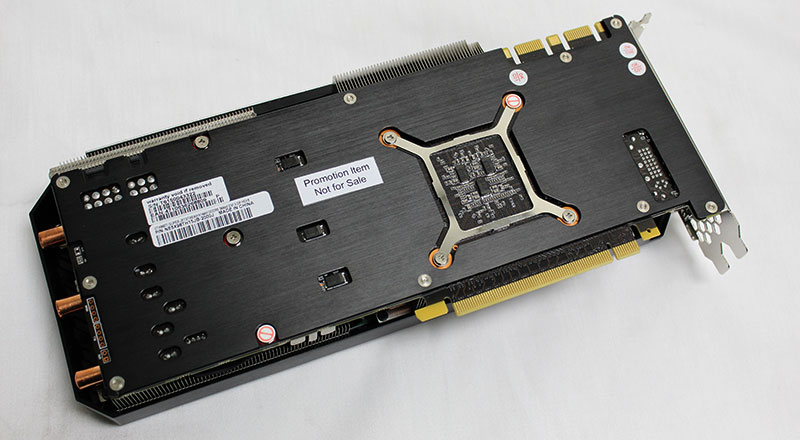 When it comes to display connectors, there is the expected selection of ports in the form of one DVI-I port, three DisplayPort outputs, and one HDMI port. The card also features a distinctive honeycomb mesh that looks to facilitate heat exhaust at the rear.

Palit has also stuck with the reference design of a 6-pin and 8-pin PCIe connectors for power, making it the only card here to not feature dual 8-pin connectors. As we’ll see later, we weren’t able to achieve as high an overclock on the Palit card, likely due partly to power limitations. 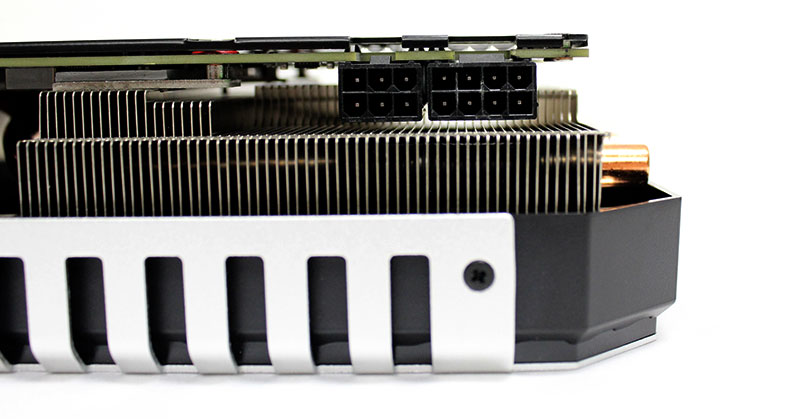 But before we dive into the results, here’s a quick summary of the specifications of each card: