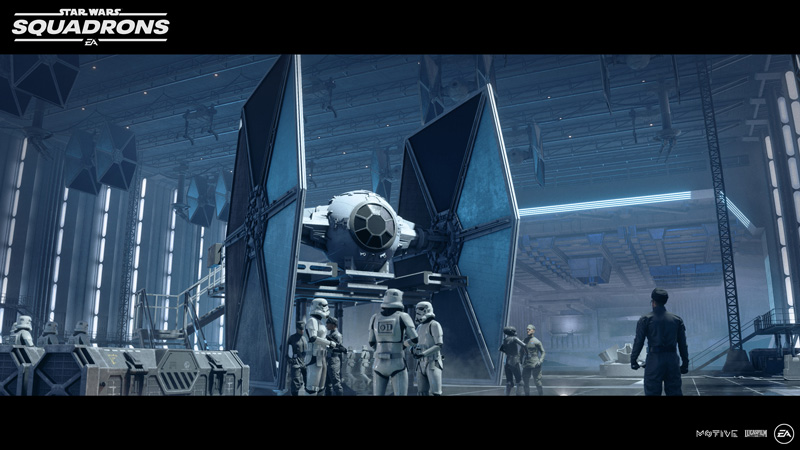 Despite the absence of E3 this year, gaming Christmas has lived on via smaller events scattered throughout the summer. The latest of these is EA Play Live 2020, a livestream in which publisher Electronic Arts showed off the many games they have in development.

These include updates for existing games such as Apex Legends, in-depth looks at upcoming titles like Star Wars: Squadrons and EA’s next-generation plans. Here’s a quick summary of everything noteworthy revealed at the event:

Apex Legends newest season, Fortune’s Favor just launched a couple weeks ago - which means it’s time for a new event to hit Kings Canyon. EA announced the new Lost Treasures Collection Event update, which consists of new Legendary skins, a new Mobile Respawn Beacon and what seems to be a buff for Lifeline - her Healing Drone can now revive teammates! The event begins on June 23, 2020.

Also revealed was that Apex Legends is coming to the Nintendo Switch this fall. Cross-play will also be enabled for the title across all platforms - meaning that players on Xbox One, PlayStation 4, PC and Nintendo Switch can all play with each other soon. Cross-play support will launch alongside the game’s upcoming Steam release in Fall 2020.

Even more EA games are coming to Steam

Apex Legends is not the only hard-hitter to join Steam’s ranks, though. Titles such as The Sims 4, A Way Out, Titanfall 2, and Dead Space 3 will also be available for purchase starting today. Fast forward a little into the summer, and the company’s EA Access subscription service will make its way onto Steam as well. Find more information on EA’s Steam games here.

Some pretty great games have been released under the EA Originals banner - like Unravel, Sea of Solitude and my personal favourite, A Way Out. Three new EA Originals have been announced today, the first of which comes from the developers of A Way Out at Hazelight Studios: It Takes Two.

Josef Fares (known for his infamous ‘F the Oscars’ speech at the Game Awards) is directing the co-op action adventure platformer. It Takes Two launches in 2021, and Fares promises that it’ll be unlike anything players have experienced before in a game.

Also announced was Final Strike Games’ Rocket Arena, a rockets-only multiplayer hero shooter. Remember the rocket-jumping mayhem of Soldier gameplay in Team Fortress 2? Imagine that, but an entire game. Rocket Arena will release on July 14, 2020 with cross-play for PS4, Xbox One and PC. Watch the trailer here.

The last of the newly-revealed EA Originals was Lost in Random. Fe developer Zoink Games is behind this gothic fairytale action-adventure game, set in a dystopia where Even and her sidekick Dicey must break the curse of Random. Lost in Random will launch in 2021 on PS4, Xbox One, PC and Nintendo Switch.

EA’s latest Star Wars game is a first-person space shooter, where players get to pilot some of the most iconic spaceships in the galaxy. The game launches on October 2, 2020 for PS4, Xbox One and PC. It’s also fully playable in VR! We covered everything you need to know about Star Wars: Squadrons here.

For sports fans, there are always EA's annual sports titles to look forward to. Madden NFL 21 is set to release worldwide on August 28, while FIFA 21 will drop a few months later on October 9. The former will be available on PS4, Xbox One, and PC (via Steam and Origin), while the latter will also release for the Nintendo Switch and Google Stadia in addition to the above.

The all-new Dual Entitlement offer is also pretty handy, as it allows players to upgrade their PS4 or Xbox One copy of the game to their respective next-gen consoles for no extra charge. Last but not least, do note that EA Access and Origin Access Basic members will get to kick-start their game a week before each of their worldwide releases!

EA games on the PS5 and Xbox Series X

While it seems like EA isn’t quite ready to fully reveal their next-generation lineup of games, we did get a small sneak peek of what they’re working on. Criterion Games is working on a racing game of some kind - probably Need for Speed or (fingers crossed) Burnout-related. We saw beautifully sombre environments from BioWare’s next game, too - Dragon Age 4.

Small glimpses of DICE’s Battlefield 6 were shown off as well, mostly to underline the power of next-gen consoles in facial animation and destructibility. Interestingly, it was revealed that Star Wars: Squadrons developer Motive Studios is currently working on a, “highly ambitious, innovative new game,” that provides an experience which, “would be impossible without next-gen technology.” We’re not sure what it is yet, but we did get to see their protagonist flying around an unfinished city environment.

And finally, the game announcement we’ve all been waiting for:

Every single time EA takes to social media to promote upcoming reveals, they get one particular request in spades: “Where’s Skate 4?” With Activision's Tony Hawk remakes on their way, it looks EA has finally decided to revive their own, long-dead skateboarding franchise!

It’s been a long ten years, but directors Cuz Parry and Deran Chung popped up at the end of EA Play Live to make the dream announcement: a new Skate game is in the works. The developers gleefully thanked fans for, “commenting the game into existence,” but didn’t seem ready to show off footage from it yet. Still, it’s just nice to know that a sequel is on its way. It’s been 10 years since the last game!