5th June 2013 was a big day for Intel as it officially launched the fourth generation Core microprocessor architecture and a slew of processors and platforms for desktops and mobile systems alike. Popularly referred by its codename "Intel Haswell", some sharp eyed folks would be wondering what's new about these processors when it's using the same 22nm process technology with 3D Tri-Gate transistors as that used on the previous "Ivy Bridge" processors. To sum it up, the new Haswell processors are using an updated microarchitecure that see several small enhancements to push power-efficient performance in the 4th generation Core processor, including Intel's new AVX2 instruction set that has updated features to support twice the the floating point operations per second (useful only when the software is recompiled using newer compilers that support and have a need to use AVX2 extensions).

Another key improvement is the incorporation of the CPU voltage regulation phase into the Haswell architecture (a function traditionally handled by motherboards), which was aimed to provide very fine grained power management capabilities on-die and manage power efficiency like never before. While it has its advantages in the mobile platform, it's not very obvious on the desktop processors as the TDP of the top-of-the-line Intel Core i7-4770K (Haswell) is now rated at 84W, which is 7W higher than the Core i7-3770K (Ivy Bridge). However, the biggest change yet for Haswell processors is their renewed graphics core that Intel boasts quite a bit about and will be the focus of our scrutiny in this article. 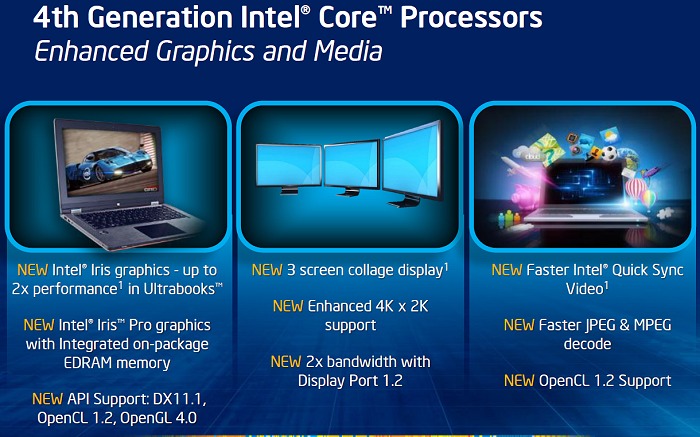 We'll get to the Iris Graphics branding in a bit, but let's start off with application programming interface (API) support which seems to have leveled up in the graphics engine of the Intel fourth generation Core processor. A cursory glance at our own coverage of the Intel HD Graphics 4000 in our Ivy Bridge coverage confirms that Intel's marketing spiel is genuine.

However, new drivers bring new software feature support as long as the graphics engine has the necessary capabilities to address those features. Checking Intel's updated documents here shows the supported graphics API and features across older hardware too. Given that Intel has coined the graphics core on the Ivy Bridge as Gen.7 while Haswell corresponds to Gen.7.5, we've reasons to believe the previous generation graphics engines may support these new APIs too. The hardware most certainly can because there's really not much of a change. Rather, the support is really a limitation of Intel's driver support team. For example, here's an article indicating OpenGL 4.0 support on Ivy Bridge class CPUs when they officially debuted with only OpenGL 3.1 support.

The next eye-catching change on the Haswell graphics core is the impressive display related support - triple screen "collage" display support, enhanced 4K x 2K resolution support and DisplayPort 1.2 support - all of which are pretty major improvements to the flexibility offered by an integrated graphics engine. Take note that triple screen non-symmetric simultaneous display support was available since the Ivy Bridge processors, but Haswell processors take that up a notch to support symmetric simultaneous display across three screens and treat all the physical displays as a single logical monitor. Essentially, Collage display is nothing more than bunching monitors into a logical group and using an extra large screen resolution to span across them - something that NVIDIA's 3D Surround and AMD EyeFinity support for a long time now.

On the "enhanced" 4K x 2K resolution support - Ivy Bridge did support such resolutions, but only unofficially in custom solutions. Now with DisplayPort 1.2 allowing much higher resolution support and the era of 4K upon us with 4K content production, 4K TVs in manageable sizes and even 4K monitors, Intel's finally opening up to officially embrace Ultra HD resolution in a big way. This slide below captures all the resolution support options based on the interface used and it all boils down to whether the system/motherboard you purchase has all these video display options:- 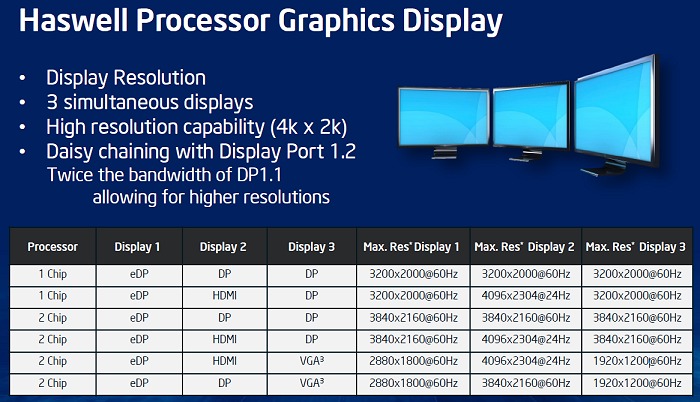 Noticed the mention of Intel Iris graphics and Intel Iris Pro graphics branding in an earlier image above? So here's where we share on the segmentation of the various Haswell processor graphics engines available. Essentially, what you have to know is that there are a few variants of the new Gen.7.5 graphics engines and they differ only by the number of execution engines and their clock speeds; features seem to remain similar across the board - for now (Intel's documents are still in the process of being updated since some of these processors have yet to be made available).

Intel has broadly classified the variants in a few tiers from GT1 to GT3e, but these are their internal classification ranks. The majority of Haswell Core i7 and i5 processors released use the GT2 class graphics such as the Core i7-4770K processor and its Intel HD Graphics 4600 core that we've tested in this article. The GT2 class graphics cores have 20 execution engines and have maximum dynamic frequencies of up to 1250MHz. This is slightly more processing throughput than the Intel HD Graphics 4000 on Ivy Bridge with its 16 execution units and somewhat comparable upper-range GPU clock speeds. Surprisingly though, the Haswell based graphics cores all have a much lower base GPU clock speed of 350MHz as opposed to 500 to 650MHz range for Ivy Bridge class devices. We reckon that should help when one is just browsing the internet or composing emails when the graphical workload is at its minimum.

GT3 and GT3e class graphics cores support up to 40 execution engines and even lower base clocks of just 200MHz, but they have a higher maximum dynamic clock of 1300MHz. Notice that these automatically adopt the "5000" branding. Between the 5000 and 5100 model, they differ only on clock speeds with the upper range maxing out at 1100MHz and 1300MHz respectively. At the point of writing, both the Intel HD Graphics 5000 and Intel Iris Graphics 5100 are primarily featured in notebook processors.

The best of the lot, the Intel Iris Pro Graphics 5200, has the honor of also having on-die embedded DRAM or eDRAM (hence the reason this class is denoted as GT3e). This extra on-die RAM drastically increases graphics performance as Intel has teased us with graphics performance charts of the Core i7-4770R (with Intel Iris Pro Graphics 5200) as opposed to the Core i7-4770K and helps it bring about discrete graphics level of performance thanks to lower latency and increased throughput. Furthermore, this extra memory acts as another cache that's shared across other processing cores of the CPU. What's not certain is the quantity of eDRAM, but this article suggests a 64MB "L4" for this purpose.

A couple of notes and observations: Firstly, the Iris Pro Graphics 5200 equipped CPUs are codenamed Crystal Well, but they are essentially still Haswell processors with the addition of the embedded memory. Secondly, all of the desktop class processors either sport the Intel HD Graphics 4600 or the Intel Iris Pro Graphics 5200 graphical engines (accurate at the point of publication).

For our article today, we'll focus on the GT2 class, Intel HD Graphics 4600 built into the current top-of-the-line Intel Core i7-4770K CPU. This bodes well since the previous generation Intel Core i7-3770K is similarly clocked at 3.5GHz with a Turbo clock of 3.9GHz, thus it allows for an almost apples-to-apples comparison of the previous (Intel HD Graphics 4000) and current generation graphics engines. CPUs with the newer Iris Pro Graphics 5200 engine are unavailable at this point of time, hence we'll have to revisit this topic in the near future.

For our Intel Core i7-4770K test rig, we had to utilize the ASUS Z87-Deluxe board as we had technical issues with the Intel DZ87KLT-75K desktop board. For the memory modules, we use the winner from our DDR3-2133 shootout, the Corsair Dominator Platinum 8GB (2 x 4GB) memory kit. As they are rated at DDR3-2133, we ran one set of results down-clocked to DDR3-1600 (the officially supported memory speed for the Haswell processor) and another set of results at DDR3-2133 to see how graphics integrated graphics performance varies (if any) with memory bandwidth improvements.

For the third generation Intel Core i7-3770K test rig, the Gigabyte GA-Z77X-UD5H-WB WiFi board was used and we've once again set the memory to operate at the platform's officially supported DDR3-1600 to compare against the equivalent run from the Haswell platform.

The representative from AMD is the latest Accelerated Processing Unit (APU) AMD A10-6800K (Richland @ 4.1GHz with Turbo to 4.4GHz). The APU features the AMD Radeon HD 8670D graphics core which has 384 Radeon cores that are clocked at 844MHz. With the chip's native support for DDR3-2133 memory modules, the APU might have an advantage in our benchmark tests. The board used was the Socket FM2, MSI FM2-A85XA-G65 motherboard. The details of each test rig are as follows:-

We have updated the benchmark titles since our last review of the IGP performance from the Intel Core i7-3770K processor. This time round, we've included PCMark 8 and 3DMark (2013) for our artificial benchmarks. To test out the support for DirectX 11 gaming, we included a new title, Tomb Raider, to ascertain how the IGPs handle it under the game's normal quality settings. Last of all, we tested the multimedia capabilities of the chips using Handbrake video encoding software and Blu-ray playback, with an updated version of PowerDVD. The following is the full list of benchmarks used to test the integrated graphics engines:

So read on for the performance breakdown on the next page to find out if the updated Intel HD Graphics 4600 is any good!