The Start of Curved and Flexible Smartphone Displays

Curved Display - The Next Evolution for Smartphones

Ready or not, the era of curved displays is upon us. A topic once discussed in the realm of dreams and concepts, curved displays are finally making their way into consumer electronics such as smartphone and TVs.

It's only a matter of time before manufacturers implement curved displays into smartphones. A Wall Street Journal report in April stated that LG would be bringing a smartphone with a flexible display by the end of the year.

LG itself made an announcement on 8th October that it has begun mass producing flexible OLED smartphone displays. However, Samsung stole its thunder a day later by announcing the world's first smartphone with a curved display. However, the availability of the smartphone is very limited.

Three weeks later, LG took the wraps off its curved-screen smartphone, the G Flex which also sports the world's first curved battery. Besides the curved display, the other much-talked-about feature of the G Flex is its "self-healing" technology on its rear. Here's a video preview of the LG G Flex smartphone as trialed by HardwareZone:-

Unlike Samsung, LG was quick to bring the G Flex beyond the Korean borders. The phone was available for pre-order in Singapore on 8th December with its availability in retail stores set for 21st December.

Knowing that a lot of our readers are interested to find out more about the world's first smartphone with a curved display, HardwareZone conducted a PlayTest event in collaboration with LG Electronics Singapore at Suntec on the same day as the phone officially launches in retail. For those who didn’t manage to join this HardwareZone + LG PlayTest event, here’s a short video that highlights what transpired that morning:- 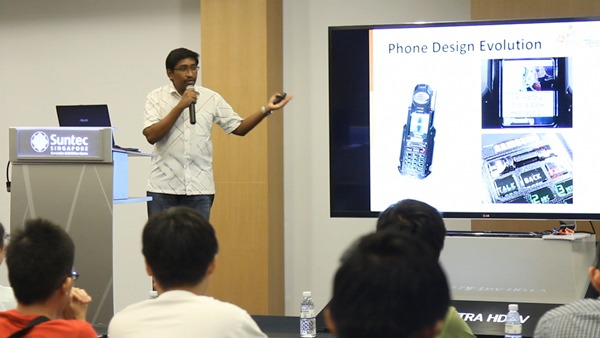 HardwareZone editor Vijay Anand kickstarted the presentation by giving attendees an overview of how phone designs have evolved over the years. Vijay talked about various significant milestones in phone designs such as the signature "banana phone" - the Nokia 8110, and the 6.9mm Samsung SGH-X820, which was the thinnest phone at the time of its release in 2006 and helped propel the slim phone design statement that has been prevalent ever since.

Three Important Aspects of a Smartphone

The microphone was then passed on to associate editor Ng Chong Seng, who elaborated further on the three most important aspects of a smartphone: the display, its battery and the chassis material used.

For smartphone displays, Chong Seng went on to explain the differences between the common display panels used in current smartphones, which are IPS LCD and AMOLED. He also discussed on the advantages and disadvantages of the display panels such as color accuracy and power efficiency.

For the material used, Chong Seng gave his perspective on using plastic, metal and glass for the phone's chassis. He also talked about how battery technologies have lagged behind the advancements in processor power and mobile needs of consumers. In case you didn't know, battery technologies have only progressed two-fold in the past decade while processing power has increased twelve times in the same period.

The Design Philosophy of the LG G Flex

Next up, LG's marketing director, Hwang Bang Youn took center stage to explain the design philosophy of the G Flex smartphone. For example, the display is curved to provide a more immersive multimedia viewing experience, fits better in the palms of users and enables the microphone portion to be closer to the mouth, thus enhancing clarity during voice conversations.

After a hearty lunch meal and ample hands-on time with the G Flex, the attendees sat down for a quick round of quizzes where they were asked five questions on the smartphone. Five attendees who managed to answer correctly, walked home with a free LG Photo Printer.

In addition, LG selected three lucky attendees to participate in a week-long user trial of the G Flex smartphone. Their reviews will be posted on the HardwareZone forum and one of them would be the lucky winner of the smartphone at the end of the user trial. Other attendees also walked away with a goodie bag from LG at the end of the PlayTest event, first-hand experience of the LG G Flex, as well as knowledge and insights gained from the event.

If you want to find out more about the LG G Flex smartphone, do check out our comprehensive review. The G Flex is now available for purchase with a two-year contract at all three telcos. Below are the respective links for their contract pricing (accurate at the time of publication):