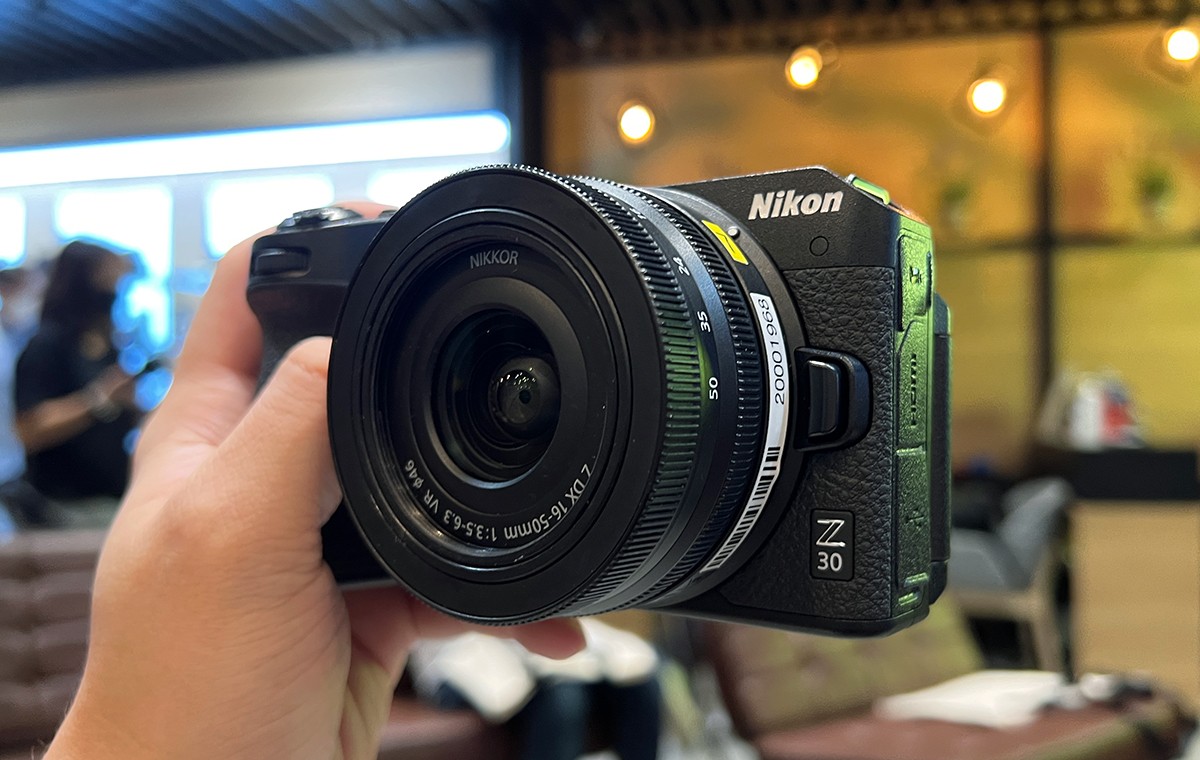 Nikon yesterday (29 June 2022) announced the Z 30, its latest APS-C (or DX-format) mirrorless camera, designed for video bloggers, live streamers and content creators. It's not yet available, but we've had enough time to form some quick impressions while we were at Funan Mall for the launch. Design and features-wise, the Z 30 shares plenty of similarities with the current Z 50 model, such as a 21-megapixel APS-C image sensor and 4K video shooting up to 30 frames per second (fps). However, the Z 30 gains a fully articulating 3-inch 1.04-million-dot touchscreen display. This display can be flipped out to one side and rotated 180 degrees to face the front. But it loses the electronic viewfinder (EVF) found in Z 50.

Not that content creators will bother with the EVF, as having the display flipped to the front for selfies is more important. However, I still find myself lifting the camera as if the EVF is there; a natural habit as I mostly use these cameras for traditional photography needs. However, the target demographics would be utilising the camera for high-quality streaming needs than for casual photography, so Nikon probably made the right choice to reduce the sticker price. On the bright side, Z 30's touchscreen display works like a smartphone display - something you cannot say for most cameras. That's because the display is super responsive, allowing you to easily tap on the menu and get to the options you want. You can also tap on the LCD to focus on a point and take a photo.

The display also lets you pinch to zoom in on a picture you have taken, when most cameras only allow you do so by pressing Zoom in/out buttons. You can also swipe left or right to browse through the photos you shot. For the generation who grew up with smartphones, handling the Z 30 touch-based controls will be like fish in water. Still, the button layout of the Z 30 is well thought out and very logical as inherited from Z 50. You will find the shooting mode dial, a large video-recording button and a command dial on the top right of the camera. At its rear, a handy four-way directional/OK combo button resides where your thumb will rest when holding the camera.

Like many classic Nikon cameras, there are also dedicated buttons for ISO and exposure compensation sited just behind the shutter release button which is situated on top of the rubberised grip.

The grip itself has been ergonomically sculpted to ensure a nice and firm grasp of the camera. While the grip might not be large enough to accommodate all my fingers (my pinky has to be tucked under the camera), it is still comfortable to hold the camera with one hand.

This is probably due to its relatively light weight (350g, body only). The Z 16-50mm VR lens does not weigh much either and offers a great counterbalance to the body. As such, you can easily hold it with one hand even if you are doing selfie videos. Talking about selfies, the Z 30 will automatically switch to portrait mode when rotating the monitor to face the front. This portrait mode will enable a 2-second timer, so you have time to get ready for the selfie shot. You can also select its 10-second timer and take up to 9 continuous selfies if desired.

In addition, a video-recording indicator light is located below the front Nikon logo and beside the flipped-out display. Thus, you know that video recording is in progress. Two built-in microphones sit on both sides of the hot shoe for better voice recording. You can put an official third-party deadcat windscreen on these microphones, but you will lose the hot shoe.

I am not sure of the audio quality of the video recording as the Z 30 lacks a headphone output port. As such, there is no way to monitor audio recording apart from looking at the display's audio meters. Instead, there is only a headphone input port on the camera's left side, parked together with a micro-HDMI and USB-C power delivery port. On the other hand, I can be sure of one thing: the autofocusing (AF) performance of the Z 30. To help content creators ensure their faces are always in sharp focus when they are videoing themselves, the Z 30 also comes with Full AF, which automatically chooses the AF point, and eye-detection AF. In my short time with Z 30, I found its AF speed fast and furious. Whether it’s with the 16-50mm VR lens or the Z DX 18-140mm f/3.5-6.3 VR lens, the Z 30 is always quick to lock into a focus almost immediately under good lighting conditions. Even in dim lighting conditions, it takes at most a second for it to get the focus sharp. It is important to note that the Z 30 does not come with in-body image stabilisation (IS) and uses the IS of the lens attached. However, you’ll still need to manually activate the len's IS via the camera's menu.

Apart from some quirks, the Z 30 is looking to be a promising proposition for content creators with its responsive display, light weight and good handling.

Stay tuned for the full review when we get our hands on the final retail unit of the Nikon Z 30 and put it through the paces. Also, keep tabs on our news piece as we'll be updating it when we get to know of the camera's availability and price. In the meantime, we have more sample shots below. 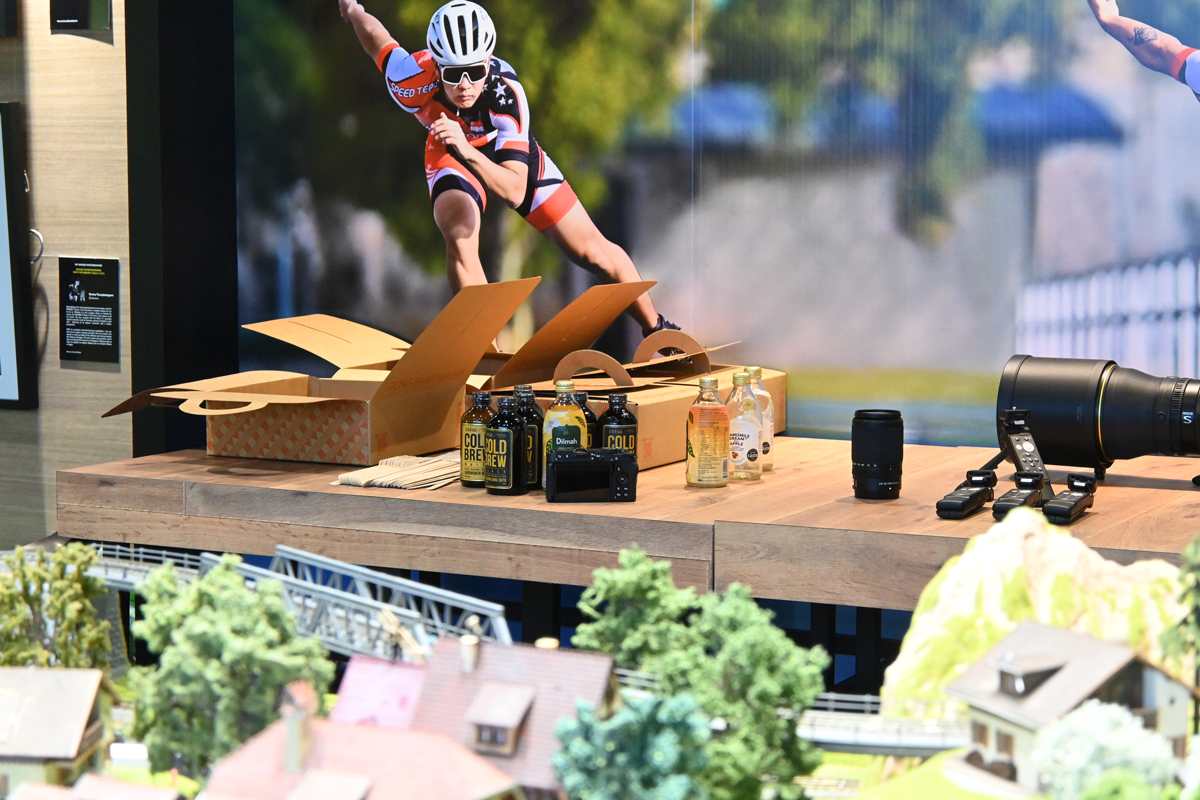