Birth of the Emperor 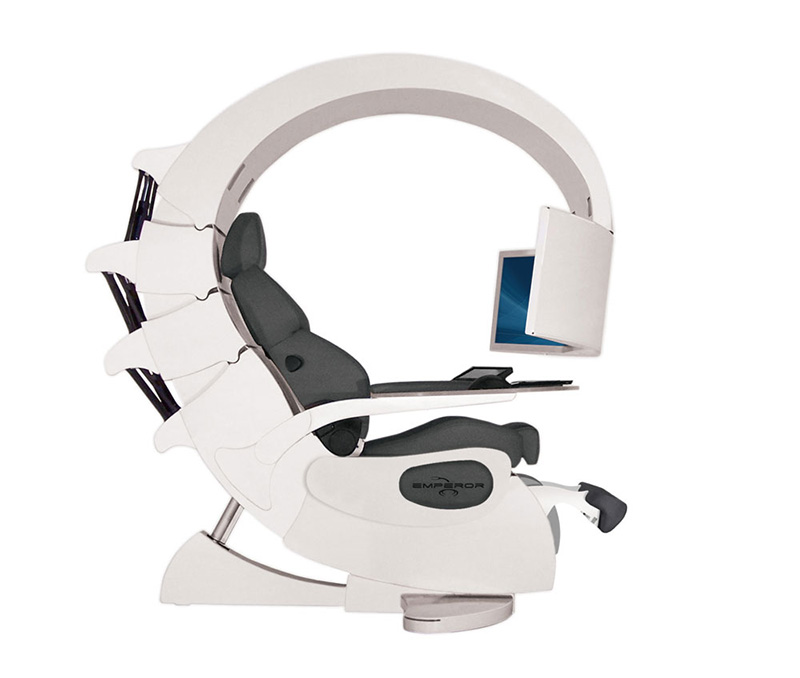 The story goes that in 2006, designer Martin Carpentier reached a point where he could no longer stand the tedious nature of maintaining his multi-monitor workstation. The mess of cables and horrible ergonomics was too much for him to bear and he decided that he needed to build his own workstation. This led to the creation of MWE Lab, and chances are, you have probably seen one of their out-of-this-world workstations before. The workstation above is the Emperor 200, the original workstation from MWE Lab that was introduced eight years ago.

It featured a frame modeled after the Emperor Scorpion, with three monitors mounted at the "stinger", had heated and cooled power adjustable seats, and even a built-in HEPA air purifier. What’s more, it also came with an integrated audio and lighting system. It’s truly outrageous and it also came with price tag to match. US$50,000, and that’s before options like a US$7,000 rotating pedestal! 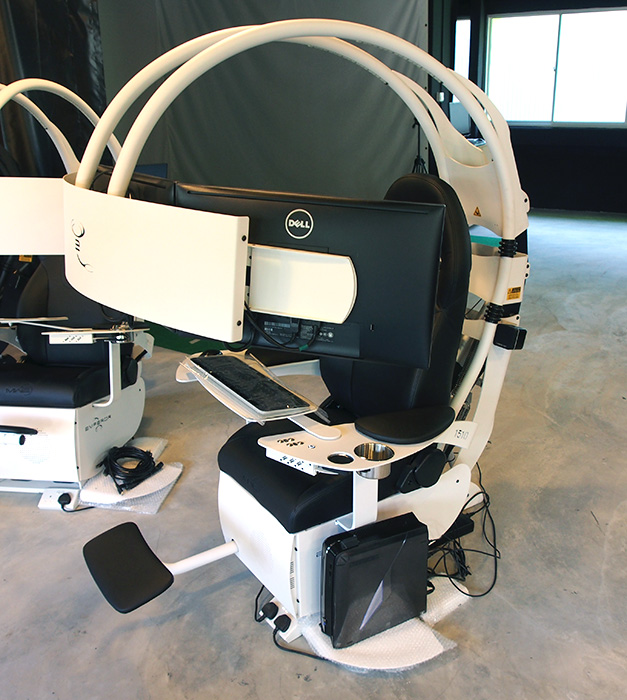 Recognizing that the Emperor 200 was perhaps a tad too overstated, over the years, MWE Lab came up with more affordable variants. Two years ago, it introduced the Emperor 1510 LX, which came in at half the price of the original Emperor 200 and also the Emperor 1510, its most basic model. Even though the Emperor 1510 is is MWE Lab’s entry-level workstation, it still costs a considerable US$5950 or roughly S$7929 at the time of writing. So what do you get for your money? Here's a quick video tour before we elaborate:-

To begin, the Emperor 1510 is handcrafted out of Canadian steel, and powder coated to resist rust and for a sand textured finish. The frame feels rock solid and inside are two motors, one that enables the workstation to recline up to 25 degrees; and another that controls the lifting of monitors, to adjust for height and facilitate getting in and out of the workstation. The Emperor 1510’s "stinger" can accommodate up to three 24-inch monitors or a single 30-inch monitor, and there’s also a calf rest for your legs. 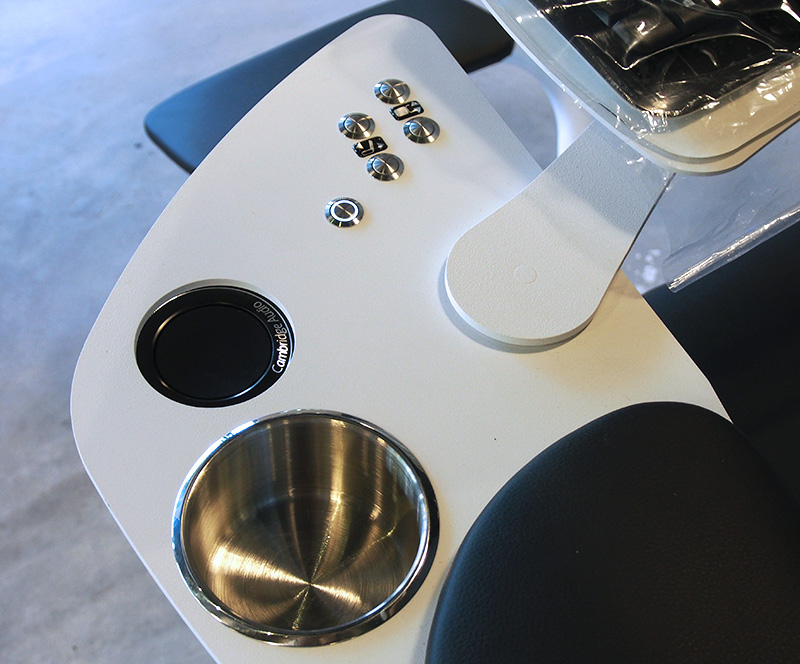 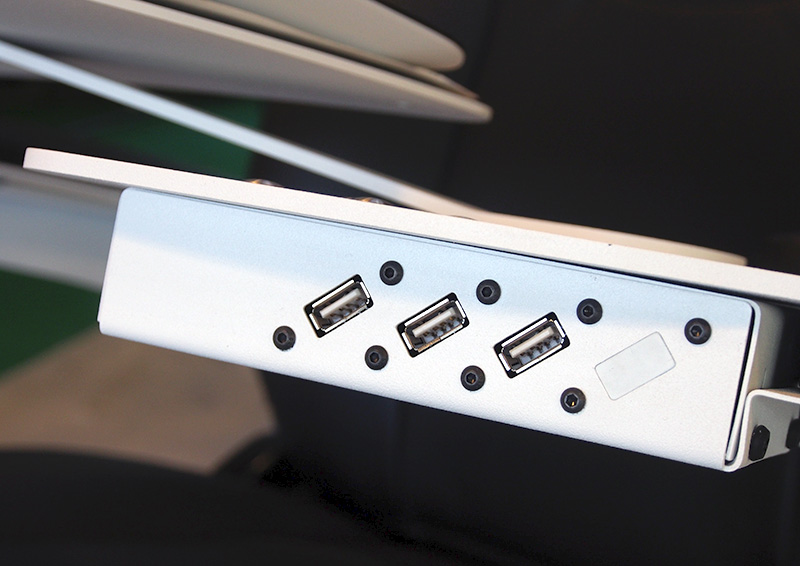 While higher-end models of the Emperor workstation have touchscreen interfaces to control the motors, the Emperor 1510 has to make do instead with simple button controls. The controls are located on the left tray panel, where there’s also a handy cup holder, a button to control the reading lights, and a volume control knob for the integrated sound system. The unit we tried came preinstalled with a 2.1 Cambridge Audio Minx M5 speaker system with the speakers positioned directly behind the seats, but it is entirely possible to customize it with another setup of your choice. The left tray panel also has a built-in USB hub that offers three USB 2.0 ports. USB 3.0 would have been preferred of course, but what’s more maddening is the position of the ports as they face outwards and is hard to access when you are seated in the workstation. 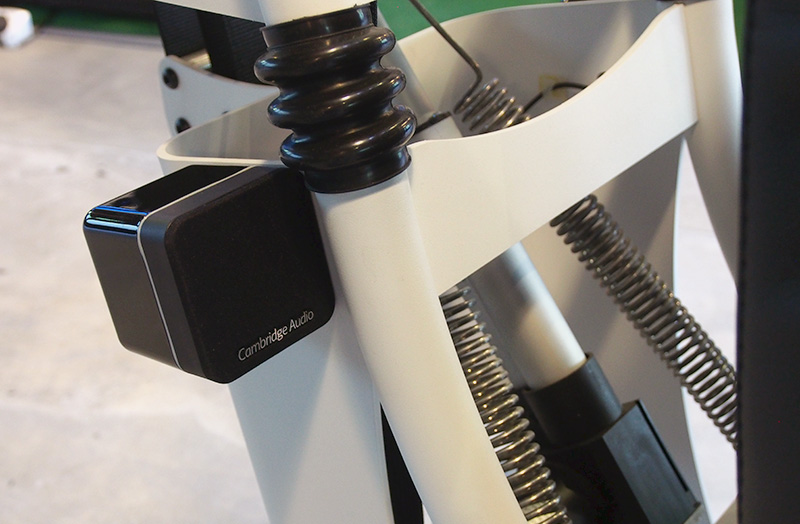 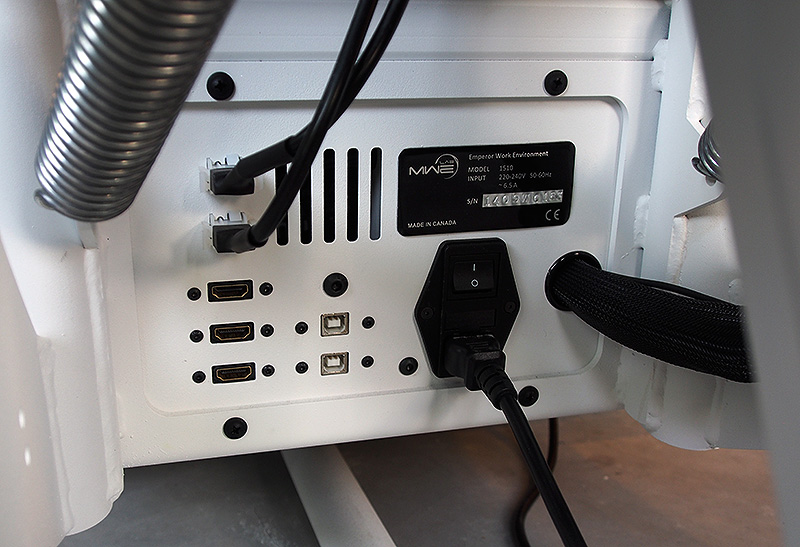 Your desktop system or even laptop can be positioned at either sides of the Emperor 1510 using the tower stand, and all ports are routed to the rear of the Emperor 1510 where there’s an I/O panel. The I/O panel panel features two USB inputs - one for the USB hub and the other for the Cambridge Audio Minx5 speaker system - as well as three HDMI ports for the three displays. There’s also a power splitter built into the frame that provides power for up to three displays.

Getting into the seat of the Emperor 1510 is a bit of an event as you need to lift the monitors out of the way first before you can ease into the seat. We guess that's what entering a Lamborghini with scissors doors feel like. And once you are seated, it’s time to bring the monitors down again to a comfortable height and bring the keyboard tray towards you.

Obviously, working using the Emperor 1510 is quite unlike anything else, and you feel as if you were in a cockpit. The frame that holds the monitors curves gently and so with three monitors you feel as if you are surrounded by displays. It’s an immersive experience to say the least, but it needs some getting used to. 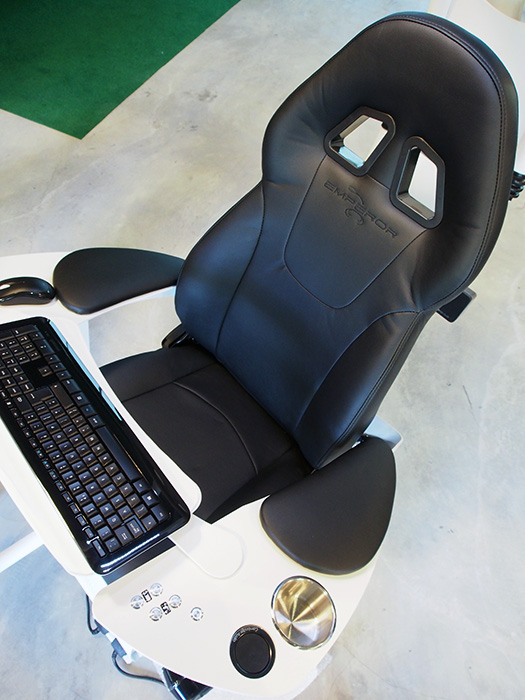 The ability to recline is cool too and is useful especially if one has a lot of reading to do. Reading in the reclined position is noticeably more comfortable, and feels like you are reading on a bed or lounge chair. Speaking of comfort, the seats are modeled after sports bucket seats and are cushy and offer good side supports. The arm rests are padded too, so sitting in the Emperor 1510 for extended periods should not be too uncomfortable.

However, the Emperor 1510 is not perfect. First and foremost, the motors controlling the "stinger" is quite slow, so getting in and out can get tiresome after some time. As a result, the Emperor 1510 is best used in a scenario where you have time to spare and really want to concentrate on the task at hand, whether it may be work or gaming. 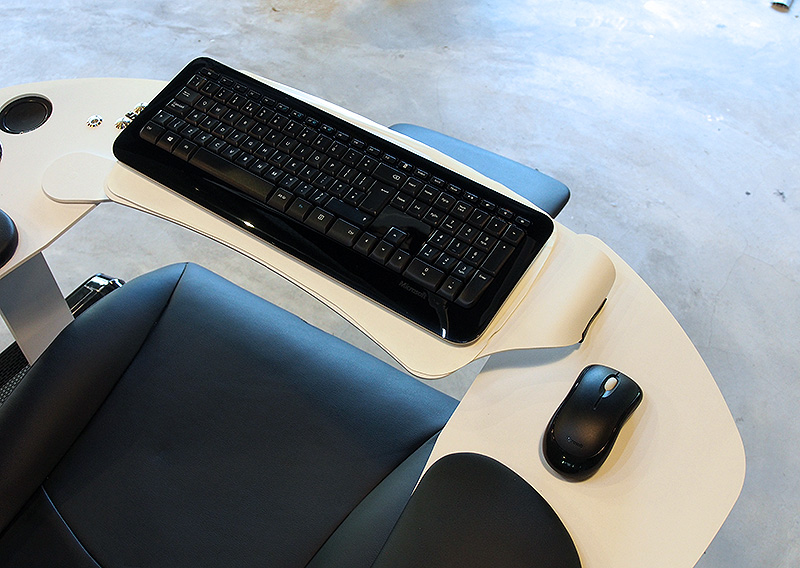 We also noticed that there is not much space on the right tray panel for a mousepad. This would be problematic for users who prefer using a mouse with low sensitivity, especially if its for gaming. On the flip side, we were told that a larger tray panel could be customized for such users if they really feel that they need more real estate for their mouse. Users can also opt for additional trays for laptops or simply to act as a surface for placing papers and documents.

Finally, the most pressing issue for more discerning users is that of upgradeability. With 4K monitors now becoming more affordable, the best way to take advantage of such displays is arguably with the DisplayPort interface, and this is a problem for the Emperor 1510 since it comes prebuilt with HDMI inputs. Upgrading in future would be a hassle for sure since the display cables are treaded through the frame itself, and would require sending it back to the distributor. Fortunately, we were told that it would be possible to spec the workstation with DisplayPort inputs and we would definitely recommend doing so to ensure full compatibility with upcoming 4K and even 5K displays. 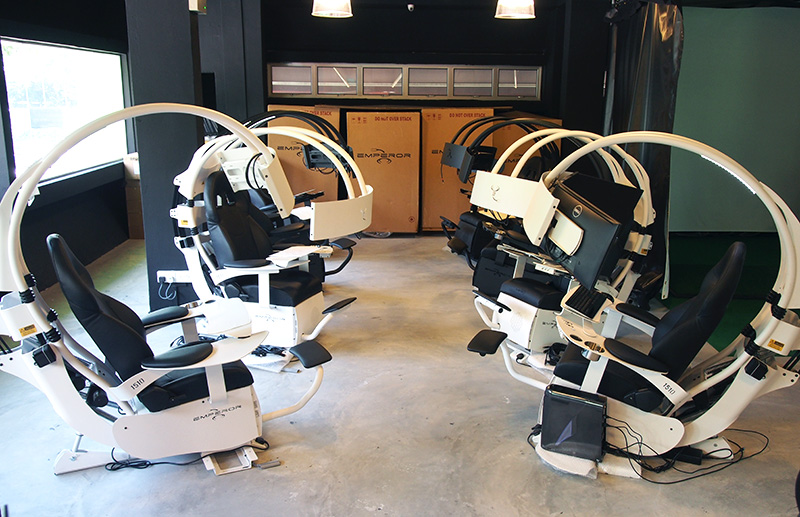 The Emperor 1510 workstation is definitely a very niche product, not least because of its high asking price and also some of its quirks. However, it accomplishes what it sets out to do very well, and that is to reduce cable clutter and provide a more comfortable and ergonomic environment for work and play. It also helps that it looks really cool.

Getting in and out can be a little tiresome after a while, but an advantage to such a design is that it isolates you and reduces distractions, and it actually does not take up a lot of space, especially for a triple display setup. In fact, at the showroom, we saw eight Emperor 1510 workstations all positioned within a small area of roughly six by four meters. Trying to squeeze eight standard work desks into such an area and still have space to move about would be a challenge. Hence, the Emperor 1510 is great for cramped workspaces, though again, it comes at a high price.

All things considered, the Emperor 1510 works just as advertised and it can be a worthwhile investment so long as you have your needs and requirements worked out very carefully.