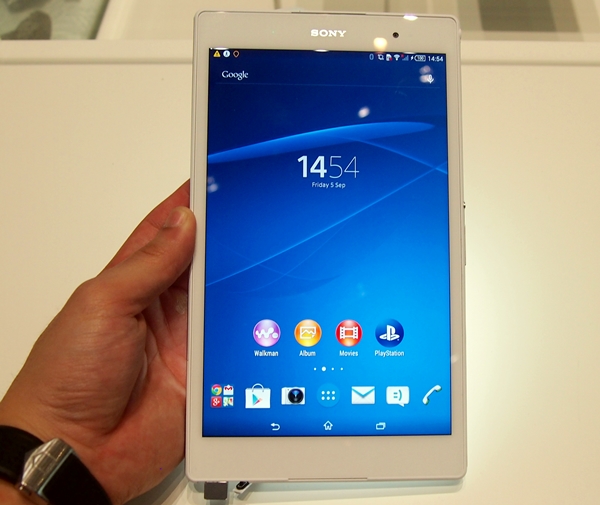 As expected of Xperia tablets, the Xperia Z3 Tablet Compact is a beauty to hold in the hands. The first thing that impressed us during our hands-on trial is its ultra-sleek waistline of 6.4mm. In comparison, the 7.9-inch Apple iPad Mini with Retina Display has a 7.5mm thin chassis while the Samsung Galaxy Tab S 8.4 has a 6.6mm thin form factor. 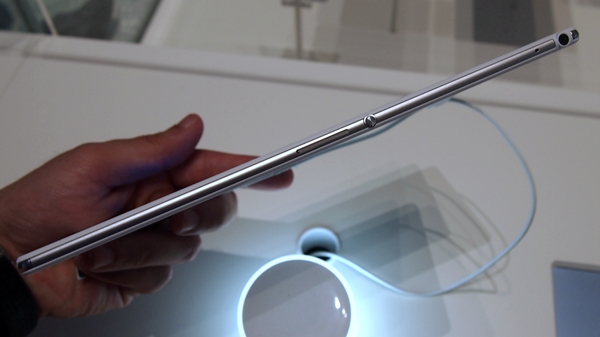 The Xperia Z3 Tablet Compact is also the lightest of its class at just 270g, making it an excellent tablet to tote around. Another physical attribute that we really liked about the Xperia Z3 Tablet Compact is the matte rear texture. Unlike its Xperia Z3 smartphones with glass panels, we feel it is a good choice to use a matte material for its rear as glass not only attracts fingerprints/smudges, it also scratches under wear and tear. 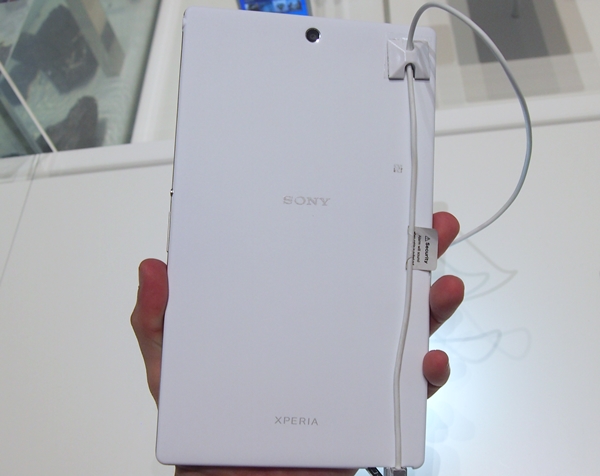 As an Xperia Z3-branded device, it is only natural that the Z3 Tablet Compact sports similar design attributes. You will see the nylon caps at the corners of its rounded frame and the device is water and dust proof with IP rating of 65/68. 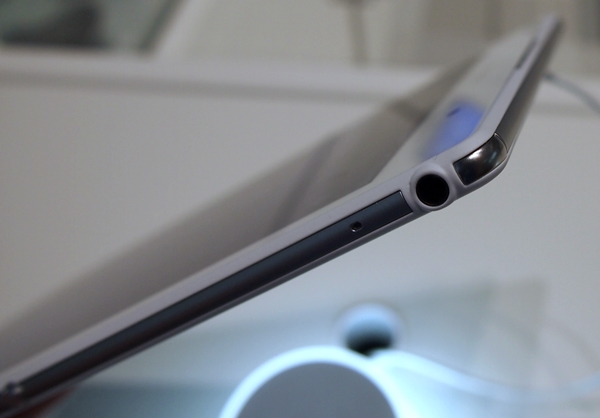 Under the hood, the Xperia Z3 Tablet Compact runs on a Qualcomm Snapdragon 801 quad-core 2.5GHz processor, 3GB RAM, Android 4.4 KitKat and is powered by a 4,500mAh battery. It comes with 16GB internal storage space with microSD expansion up to 128GB.

The Xperia Z3 Tablet Compact is slated for a global launch in both LTE and Wi-Fi models from this month. 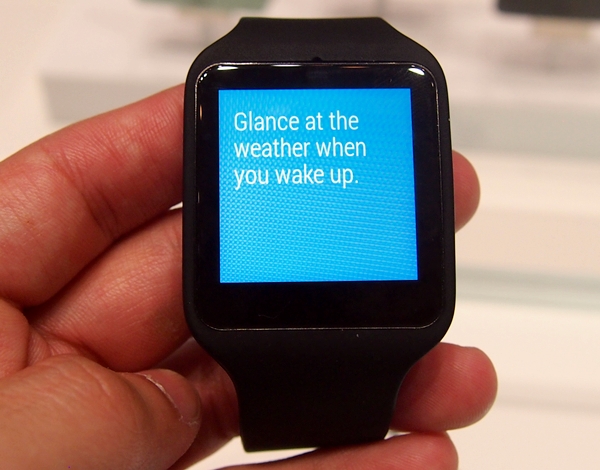 As an Android vendor, Sony had no choice, but to develop a smart watch based on Google’s Android Wear platform. Its previous smart watches are powered by its proprietary operating system, which are at risk of being obsolete considering the interest around Android Wear.

Compared to the Smart Watch 2, the new addition has a similarly-sized display at 1.6-inches across albeit with a higher resolution (320 x 320 pixels). This is on-par with the ASUS Zen Watch. In terms of design and appearance, we felt that Sony took a step back with the Smart Watch 3. Having handled the Zen Watch and LG G Watch R, the Smart Watch 3 pales in comparison with its silicone rubber strap and neither does the watch appear to have a premium finish. 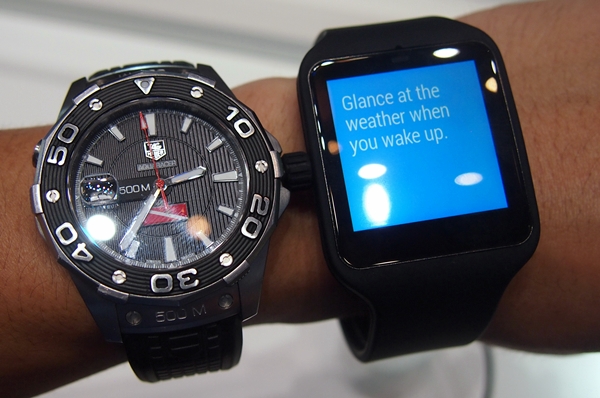 However, Sony continued to nail one crucial aspect that the other brands failed to address - the ease of charging the device. The Smart Watch 3 has a micro-USB port on its rear protected by a flap. This means that the Smart Watch 3 can be charged using any micro-USB cable. The other smart watches require a special charging cradle to be attached when charging, which can be inconvenient especially if you forget or lose the charging cradle. 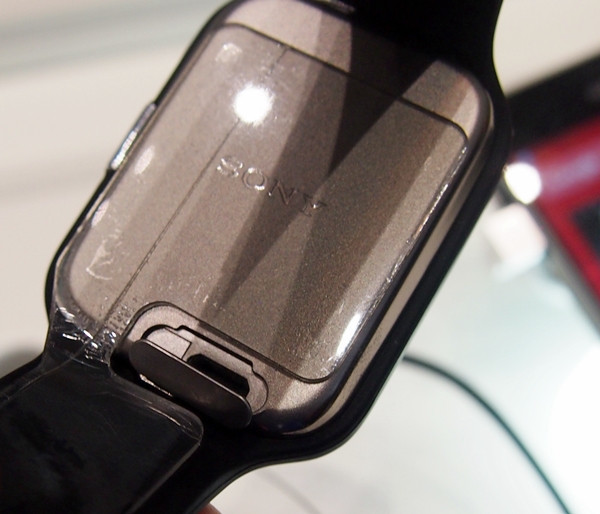 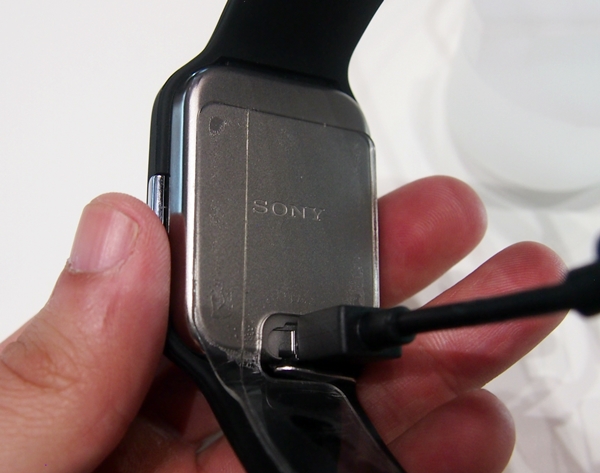 Other specs of the Smart Watch 3 include a quad-core 1.2GHz processor, 512MB RAM, 4GB internal storage, a microphone for voice control, GPS, Bluetooth 4.0, NFC and a 420mAh battery that is stated to last up to 2 days of normal usage. 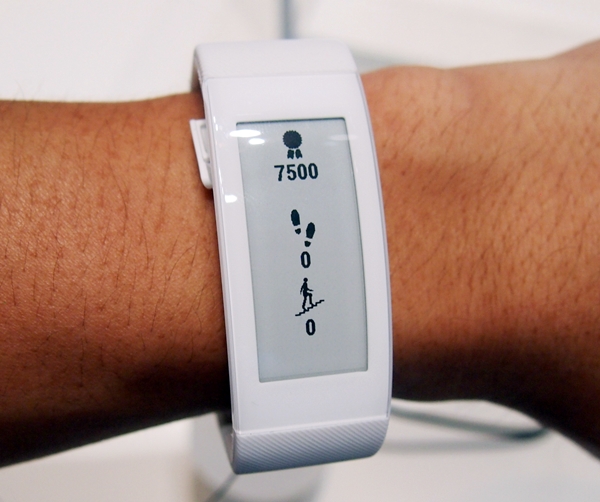 Sony seems to be adopting the same six-month refresh cycle for its SmartBand portfolio as its Xperia flagship smartphones. 8 months after unveiling the SmartBand at CES 2014, Sony updated the device with a 1.4-inch e-paper display and brands it SmartBand Talk.

While the e-paper display is curved, it only shows black and white. This helps to keep power consumption to a minimum, and also makes the display highly legible under strong lighting conditions. The display along with the side buttons are used to navigate the interface. You also tap on the menu icon to access it. 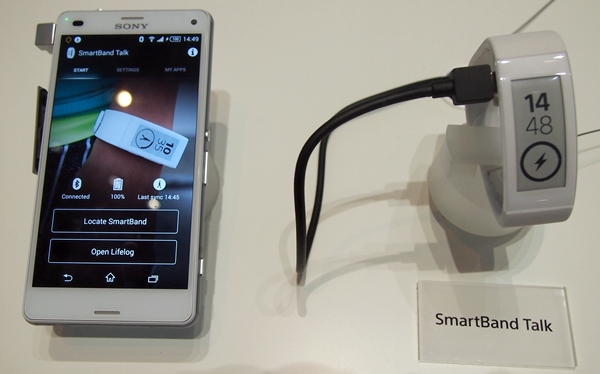 Like its predecessor, the SmartBand Talk is built around the Lifelog app where physical activities (sleeping, exercising, walking, running) and things you do on your smartphone are tracked. 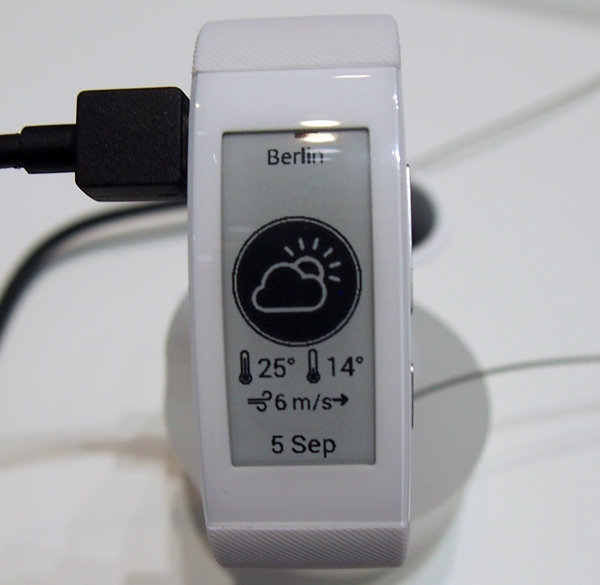 As the name suggests, the SmartBand Talk comes with a built-in microphone and speaker. This allows you to make and receive calls from the wearable device. You also can rely on Sony’s integrated Voice Control technology to assign specific voice commands for carrying certain phone functions.

The Smart Watch 3 is priced at €229 while the SmartBand Talk will cost about €159. Both wearable devices are expected to be launched globally later this month. 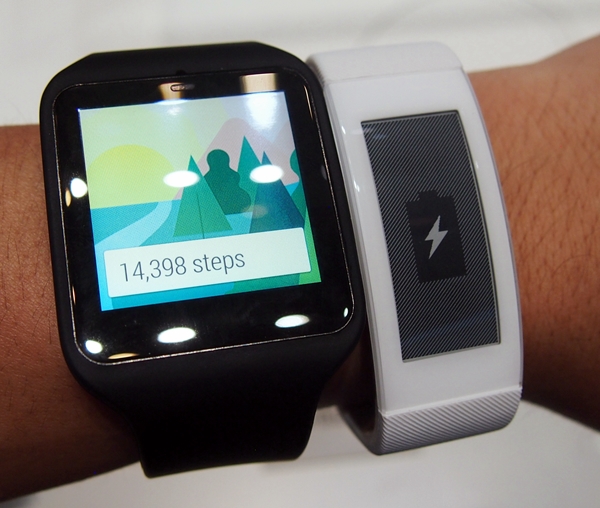