Is 5-inch the New Sweet Spot for Smartphones?

Remember the days where smartphones had display sizes below 4-inch? It is actually not too long ago; a couple of years back, perhaps? Currently, phone makers are racing against each other to launch devices with bigger displays, and 5-inch seems to be the new standard this year.

HTC has jumped the gun with its launch of the 5-inch Butterfly, an international variant of the J Buttery (Japan) and Droid DNA (U.S.A). Rumors of Sony jumping on the bandwagon first surfaced in October, where leaked images revealed a Sony device sporting a 5-inch full HD display.

DigiTimes then reported in December 2012 that its industry sources indicated that a number of phone vendors, including Sony, will be rolling out 5-inch full HD phones in the first half of 2013. Subsequently, alleged official images of the Sony device, known as the Xperia Z, leaked just days before its official launch at CES 2013.

Earlier today, we had a hands-on session with the Sony Xperia Z. Before we share our experience, here's a quick look at the specs of the Sony's flagship model for 2013: -

The Sony Xperia Z looks nothing like the other Xperia smartphones we've seen in 2012. Although it still has the signature rectangular design, the Xperia Z feels very different. Despite sporting a 5-inch display, the Xperia Z actually feels light in our hands even though it weighs 146g. Considering that the HTC Butterfly weighs 140g, the Xperia Z is quite decent for a phone of its class.

Adopting the same design principles as Google and LG, the Xperia Z sports one glass panel on the front and back. In case you are wondering whether they are Gorilla Glass, they are not. Sony uses a combination of tempered glass and anti-shatter film to boost the scratch resistant properties and durability of the glass panels against wear and tear.

The main feature of the Xperia Z is its 5-inch Reality Display, which is powered by Mobile BRAVIA Engine 2. Compared to the slightly saturated HD Super AMOLED display of the Samsung Galaxy Note II, the Xperia Z gives a more realistic color reproduction. With a resolution of 1920 x 1080 pixels (441ppi), the Xperia Z is clearly in the same league as the HTC Butterfly. The improved clarity and brightness are well suited for watching movies and reading on-the-go.

To substantiate its claims of having the highest levels of dust and water resistance (IP55 and IP57), Sony made number of modifications to the design of the Xperia Z. Besides the usual connectivity ports and card slots, the Xperia Z is sealed up pretty tight. Having said that, the Sony phone does not have a removable battery.

Perhaps one of the most unique design features of the Xperia Z is its metallic Power button on the right side of the device. Due to the nature of the material used, it is actually very easy to feel and press the button even without looking at it. Its location also makes it convenient to access the button, which is particularly important for a device with a 5-inch display as you do not need to stretch your finger or hand to reach the top to turn on the screen or device.

As the Xperia Z is the first 5-inch device we've handled, it is only right that we compare its design and looks with the current competition. Unfortunately, we do not have a review unit of the 5-inch HTC Butterfly for comparison, and had to make do with the 5.5-inch Samsung Galaxy Note II, 4.7-inch LG Nexus 4 and 4-inch Apple iPhone 5.

Out of the box, the Xperia Z runs on Android 4.1.2 Jelly Bean. Sony states that it will be rolling out the Android 4.2 update shortly after the launch of the device in Q1. Android purists may want to give the Xperia Z a try as the modifications done to the Android user interface are minimal.

The user experience was actually comparable to that of the buttery smooth LG Nexus 4, which we have been using for the past two months. It's something that Sony has learnt, and hopefully the other Android vendors, HTC and Samsung, could embark on a similar path in future.

It's rare to see an Android vendor following Google's implementation of the on-screen navigation keys, and Sony happens to be one of them. However, the space occupied by the row of on-screen keys means that you are unable to maximize the entire 5-inch screen estate for some activities such as reading.

Imaging performance on the Xperia Z is a key area of focus for Sony. Not only does it equips the Xperia Z with a 13-megapixel fast capture rear camera with Exmor RS for mobile, it also gives the camera interface a slight revamp. We found the new interface easier and simpler to use.

Apart from still images, the Sony Xperia Z is also the first mobile phone to feature HDR Video. Capturing videos in HDR means that resultant videos will have higher dynamic range and greater details. This is especially apparent when scenes contain both dark and bright areas. 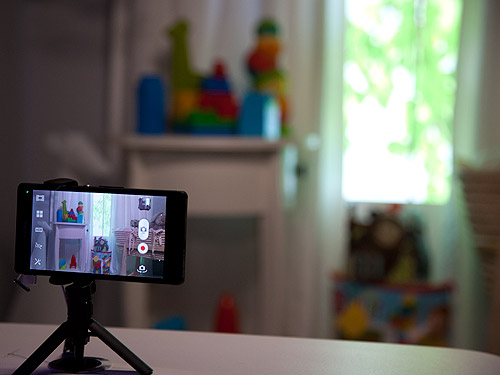 For a device of its class, it is quite odd that Sony only provides a built-in 2330mAh battery for the Xperia Z. There is no doubt about the amount of power that is needed to power the 5-inch display, and the many top-notch multimedia features that the Xperia Z has. We've expected a larger battery capacity (at least 2500mAh) since Samsung is able to do so with its Galaxy Note smartphones.

Fortunately, Sony includes Battery Stamina Mode to improve the standby time on the Xperia Z. This is nothing new as we've seen similar implementations on other Android smartphones such as the ASUS PadFone 2 and HTC One X+. Enabling Battery Stamina Mode will disable Wi-Fi, mobile data and most applications temporarily. You will still be able to receive phone calls, text messages, Sony Calendar notifications and alarm signals. The Music Player and FM radio will continue to work, while downloads and uploads are allowed to finish.

Sony also offers several accessories to go along with its latest flagship device. For the Xperia Z, a pair specially-designed earphones will be included in the retail package. According to a Sony spokesperson, the earphones deliver better audio quality on the Xperia Z.

Other optional accessories that we handled are the Stereo Bluetooth Headset SBH20 and Wireless Headset DR-BTN200M. They are essentially NFC-enabled headsets, which you can "touch" using the Xperia Z and begin listening to music instantly.

*Update as of 15/1/2013: The Sony Xperia ZL will be available in Singapore, Indonesia, Vietnam and Philippines in Q1.