Arrival of LTE on Smartphones

Nearly six months ago, SingTel rolled out its first commercial long term evolution (LTE) mobile broadband service, known as the Broadband on Mobile Prestige 75. Priced at S$69.90 per month, Prestige 75 offers users a bundle of 50GB 3G data and 10GB LTE data, with excess usage charged at S$0.512/MB and capped at S$94.16 per month. We managed to get some hands-on time with the mobile broadband service and frankly, found it to be compelling.

Fast forward to June, 2012. SingTel has not only unveiled the country's first 4G LTE service for smartphones, but also introduced new tiered 3G and 4G plans in its aim to ensure higher quality and more consistent experience for its users. Here's a quick summary of the new Flexi and iFlexi plans which will come into effect on July 1, and SingTel's LTE coverage roadmap:

The new plans for smartphones offer similar theoretical and typical download speeds as the Prestige 75 plan. However, SingTel has lowered the local data bundles across the board to 2GB for Flexi Lite, 3GB for Flexi Value, 4GB for Flexi Plus and 12GB for Flexi Premium. Moreover, excess data charges have been revised to S$5.35/GB (inclusive of GST) and S$94.16 (inclusive of GST) data cap per month. While this move has been criticized by some consumers, SingTel sees the need to shift away from the traditional one-size-fits-all approach as it feels that is not sustainable in the long term.

According to current usage patterns, SingTel claims that 64% of mobile data on its network is consumed by 10% of its subscribers, hence depriving the other 90% from enjoying the full benefits of the network. With the new tiered pricing model, SingTel states that 90% of its subscribers will not incur higher charges as their data consumption do not exceed the new bundles.

Just a day after the announcement, we had the chance to check out and experience the new 4G LTE speeds. We also compared its performance against SingTel's existing HSPA (3.5G) network. Equipped with the new HTC One XL, we conducted a field test at the basement level of Lucky Plaza to assess its in-building performance. After that, we also took the test to the streets along Wheelock Place. Both the LTE and HSPA (3.5G) networks were subjected to the following tests:

As benchmarks generally do not reflect actual download speeds, we included two test parameters that mimic the typical usage scenarios of a mainstream consumer:

The second test parameter involving a 1.6GB ISO file download is meant to simulate heavy data consumption by the 10% of SingTel's subscribers. This should provide a gauge of the ability of SingTel's 4G LTE network to sustain large file downloads by this group of consumers.

We were caught by surprise by the speed at which the 18.4MB PDF was downloaded - LTE was a good 30 seconds faster. This seems very promising for users who need to access email attachments outside of the office.

When it came to downloading files from Dropbox, one of the most popular cloud storage services, the results weren't up to expectations. It actually took 7 seconds longer to download the 20MB file on LTE than HSPA (3.5G). The likely reason could be that the file was downloaded from an external server, which is inevitably subjected to many variables such as server location and available bandwidth (from the other end). This was further confirmed when we tested it out on SingTel's Store & Share service, which has its server located in Singapore.

Needless to say, LTE was the clear winner for that test. It took a mere 6 seconds to download a 19.96MB file over LTE, 4 times faster than that of the HSPA (3.5G) network. Due to the proximity of its server and optimization for faster download speeds, we foresee more SingTel customers signing up for this free bundled service. As a quick refresher, all SingNet fiber broadband users will get 10GB free storage, while Flexi and iFlexi mobile plan customers will enjoy 500MB free storage. For more information on Store & Share, click here.

For the last and most demanding test, we tried downloading a freely-distributed CentOS ISO image file that is 1.6GB in size. During the duration of the test, we managed to record a top download speed of 3.72MB/second, which was quite impressive. Although speeds were inconsistent throughout the test, the download was completed in less than 21 minutes. Over HSPA (3.5G), well, let's just say it'd take very much longer. 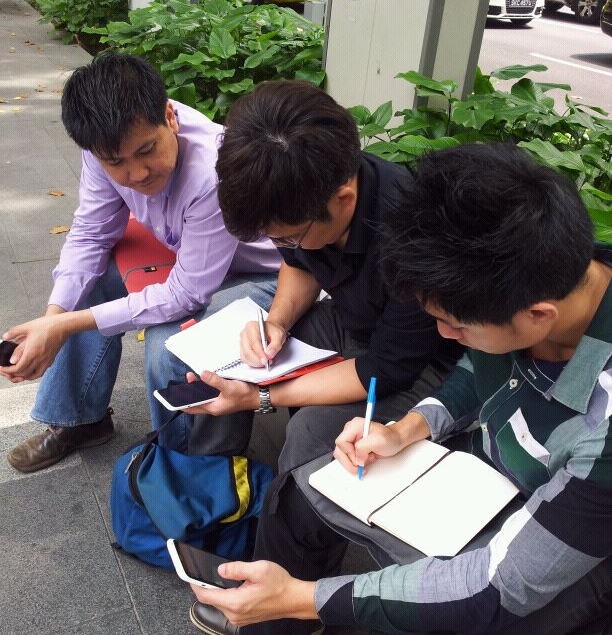 We also took to the streets to test out the 4G LTE connectivity. We noticed that the 4G coverage in Orchard area does not extend to underpasses and tunnels as we experienced the loss of 4G signal while traveling through the underpass to Wheelock Place. The network would automatically switch back and forth between 4G and HSPA (3.5G). Below are the results of the tests done outside Wheelock Place.

The results of the three tests differed slightly from the earlier ones done at the basement of Lucky Plaza. This could be due to the characteristics of the frequency bands deployed locally. The 1,800MHz frequency band provides better indoor signal strength while the 2,600MHz frequency band is more suitable for covering densely-populated areas and managing heavy data volumes. In addition, the deployment of SingTel's 4G LTE network is still in its early stages and speed inconsistencies are to be expected. As SingTel continues to work and enhance its network infrastructure, hiccups like these should (hopefully) be gradually ironed out.

It was quite a fruitful experience to be among the first to test out SingTel's 4G LTE network. The download speeds on the HTC One XL blew us away and definitely opened new doors to more forms of media consumption on smartphones when the network is fully deployed.

And there's no doubt that early adopters will stand to benefit the most, speed wise. Will we still get such good downstream speeds once everyone is onboard? We don't think so - even SingTel says that it expects typical download speeds to be between 3.4Mbps and 12Mbps. We also empathized with consumers' concerns about the lower data bundles offered by the new Flexi and iFlexi plans. After all, what's the point of having a high speed network when we are somewhat restricted by usage parameters?

With data traffic on mobile networks growing at 62% each year since 2010, telcos are increasingly feeling the pressure to increase the bandwidth of existing networks or upgrade their infrastructure. SingTel appears to be taking a two-pronged approach by offering a tiered-pricing model while making continuous investments in its infrastructure. We can only hope that this will maintain the prices of the mobile plans, as well as deliver a more optimal user experience for everyone.

Currently, there are only three phones that are LTE-enabled - the HTC One XL, the Samsung Galaxy S II LTE and the LG Optimus LTE. We are expecting more LTE phones to be available when M1 and StarHub reveal their LTE price plans in the coming months.