Hands-on with the Samsung NX Mini 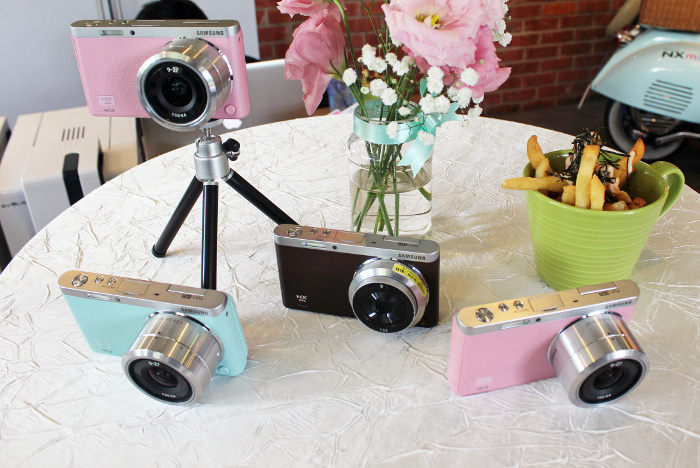 With smartphones eating away at the compact camera segment and mirrorless system cameras yet to achieve the same traction as DSLR cameras, it seems the photography industry is in transition to finding the balance to pander towards consumers' needs. Photography enthusiasts fully understand the power of these larger cameras, but let's face it - smartphone cameras have progressed so much and they are always in your pocket that it becomes your next best imaging device.

Samsung seems to understand the need to make a powerful camera pocketable and so they've come up with their first incarnation of a mirrorless camera system that's smaller and lighter than anyone would have expected - enter the NX Mini. The idea isn't new since cameras from Nikon and Panasonic has pursued cameras of such build, but Samsung took it a step further to make their product sleeker and lighter. Naturally, the NX Mini is aimed at the mass consumer market, but will it make the cut to persuade budding photographers to reserve a spot in their pocket?

Before we pen our thoughts, let's take a closer look at the NX Mini and what it offers. 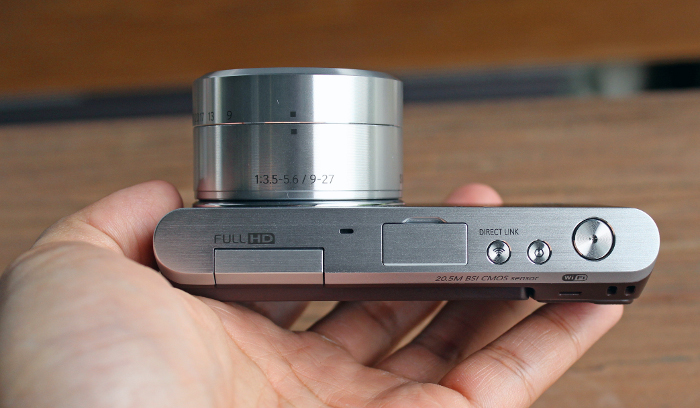 The NX Mini is really compact, and can be easily mistaken for a point-and-shoot compact camera. The body itself (without a battery) is just 158 grams (or as our host puts it, the weight of three cupcakes). With the battery, it's just under 200 grams, making it the lightest in its class. Even with the NX-M 9mm F3.5 pancake lens, the camera is small enough to fit into your back pocket.

Although it has a leather-like surface, it still feels slippery, and we foresee that handling the camera with a firm grip might be an issue. Also, while the camera is light, it does feel that it might not be able to withstand too many knocks, but this is just a preliminary judgement.

On the rear, its 3-inch 460k dot display can be flipped up so that it’s easy to take selfies. However, the display’s resolution is well behind other mirrorless system cameras and it was quite apparent to us when we used it that it looks like a step backward for a new camera.

Due to the camera’s slim proportions, the NX Mini uses microSD memory cards, just like your smartphone. While microSD cards are small and thus easy to lose as compared to SD cards, we suppose it’s a worthy trade-off in return for a smaller camera body. 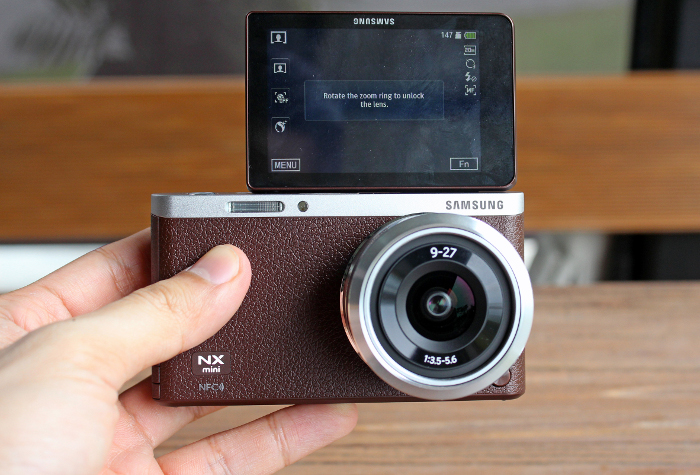 The NX Mini is equipped with a 1-inch, 20.5MP BSI CMOS sensor within, but due to the camera's small size, it uses a different lens mount from Samsung's other NX cameras. Called the NX-M, in essence, it's a sub variant of the NX camera system. It is however compatible with the larger NX lens system via an optional specialized mount adapter should you want to use any NX lenses that you might own. Moving on, the camera processing engine within the NX Mini is capable of 6fps continuous shooting.

As iterated earlier, the camera's display can be flipped up to help with taking selfies, but it’s still pretty awkward to press the shutter release button when you’re holding it with an outstretched arm. Samsung overcomes that limitation in the form of the Wink shot, which requires you to wink at the camera, thus triggering a two-second countdown before snapping a shot.

For those who prefer a little more control over your shots, the NX Mini does have manual exposure modes, though you can only change settings with the touch screen display or directional buttons, which can prove cumbersome.

As with all recent Samsung cameras, the NX Mini features Wi-Fi and NFC for easy connectivity and sharing of images. You can use your smartphone as a remote control, or send images over Wi-Fi and NFC. What we found useful was the Group Share function, which allows you to simultaneously send images to multiple friends. This eliminates the time-consuming and repetitive process of selecting and sending the same image to different friends.

The NX Mini also allows for direct upload to Dropbox and Flickr, with Dropbox offering 2GB of free storage, and Flickr offering one terabyte of images. This is a handy option if you ever run out of storage space on your microSD card, though uploading to the aforementioned cloud services requires Wi-FI connectivity first.

Three specialized NX-M lenses will be launched especially for the NX Mini: 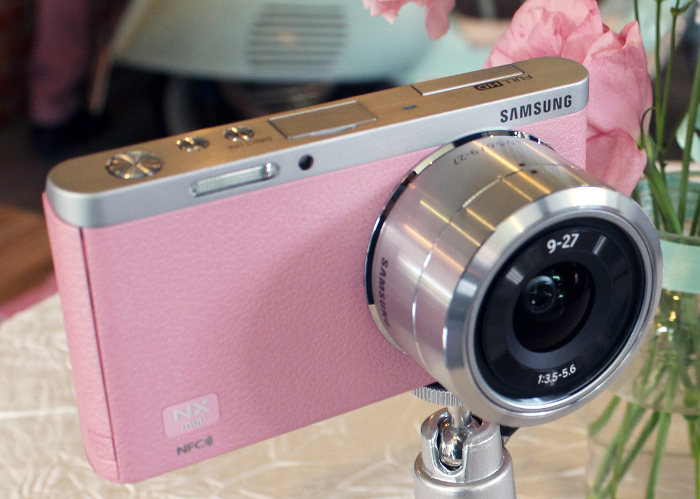 The NX Mini presents an interesting concept, where a mirrorless interchangeable lens camera can rival a point-and-shoot compact camera in terms of size, usability and perhaps even performance. In terms of connectivity, the NX Mini is quite strong as well, with built-in Wi-Fi and NFC functions coupled with Samsung's smart functions that have trickled down from the earlier round of notable smart cameras such as the EX2F. With Samsung’s experience in building smartphones and connected cameras, we can expect to see more synergy between both product groups as well as ease of use.

With its flip-up display and connectivity settings, the NX Mini seems to be aimed at the casual shooter who would be interesting in something more powerful and capable than their smartphone, but in as small a package as possible. While it does feature manual exposure modes, the lack of a mode dial does make it seem that the NX Mini's target audience is primarily looking for something small and easy to use.

The ability to change lenses is also a bonus, when you consider the fact that the NX Mini will go for just S$549 (body with 9mm lens) or S$649 (9-27mm lens), which is close to some of the more powerful point-and-shoot models in the market. And to sweeten the deal, the NX Mini also comes bundled with Photoshop Lightroom 5 (worth US$149), which is a plus point and brings further value to the camera.

The nearest competitor to the NX Mini seems to be the Nikon 1 series, which also feature a 1-inch sensor, but has quicker autofocus and a faster burst mode. That aside, many might compare the NX mini to the Sony RX100 Mark III as well, since it has a 1-inch sensor and also good imaging quality - even though it doesn't have an interchangeable lens system. Yet another compact model that the Samsung NX Mini will be competing against is the Panasonic Lumix DMC-GM1 with its Micro Four Thirds interchangeable lens system. Among the three, the GM1 from Panasonic has been the smallest and lightest interchangeable lens based camera until the Samsung NX Mini showed up and is 6% less in volume and weight.

Is Samsung's gamble on creating yet another lens system worthwhile? And can the NX Mini hold up against these competitors? Stay tuned for our review! We're now awaiting for the retail ready unit to be made available for our testing.