The Note8 sports Samsung's first attempt at a dual-camera setup, and for the most part, it's played it fairly safe. Like Apple (and many others), you get a telephoto lens paired with a wide-angle lens, giving you 2x optical zoom and a slider that lets you select anything between that. Both lenses are 12-megapixel sensors, with the telephoto lens equipped with an f/2.4 aperture and the 'wide-angle' lens equipped with an f/1.7 aperture. The setup works exactly like the iPhone 7 Plus. The cameras are also capable of 10x digital zoom. 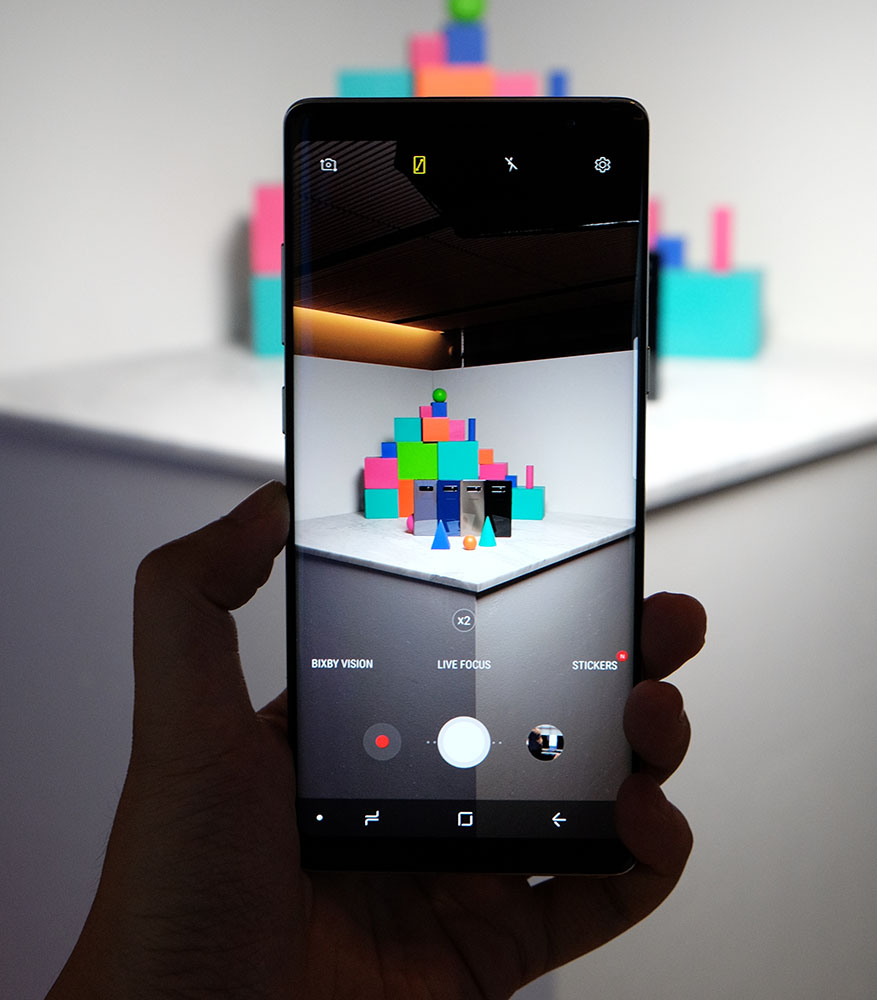 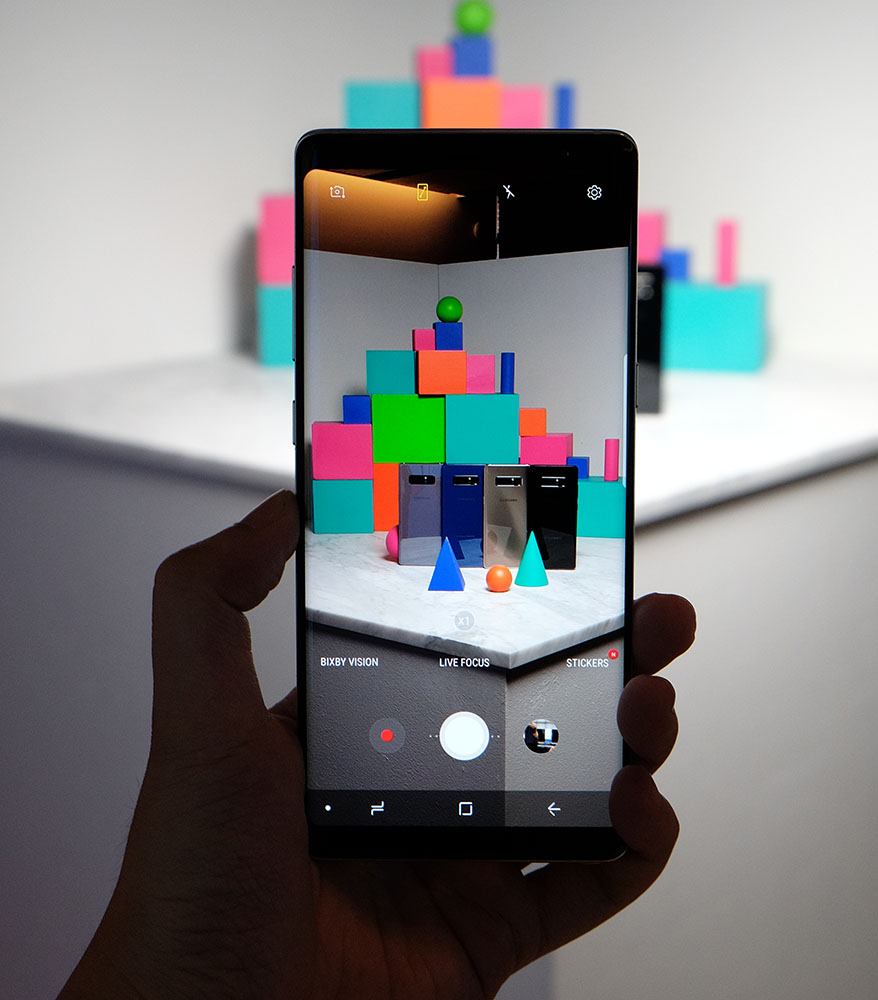 One of the big features of dual-camera phones is a background blurring bokeh mode. Apple calls it Portrait mode, while Samsung's version is called Live Focus. A nice feature of Live Focus is that it lets you adjust the amount of background blur through a slider that pops up just above the on-screen shutter button, with real time adjustments showing any changes. You can even make adjustments to the bokeh after the shot has already been taken by going into the Gallery. Click on the image and the same slider will pop up. On iOS 11 you can only disable or enable the depth effect of a photo taken in Portrait mode - there's no in between option. 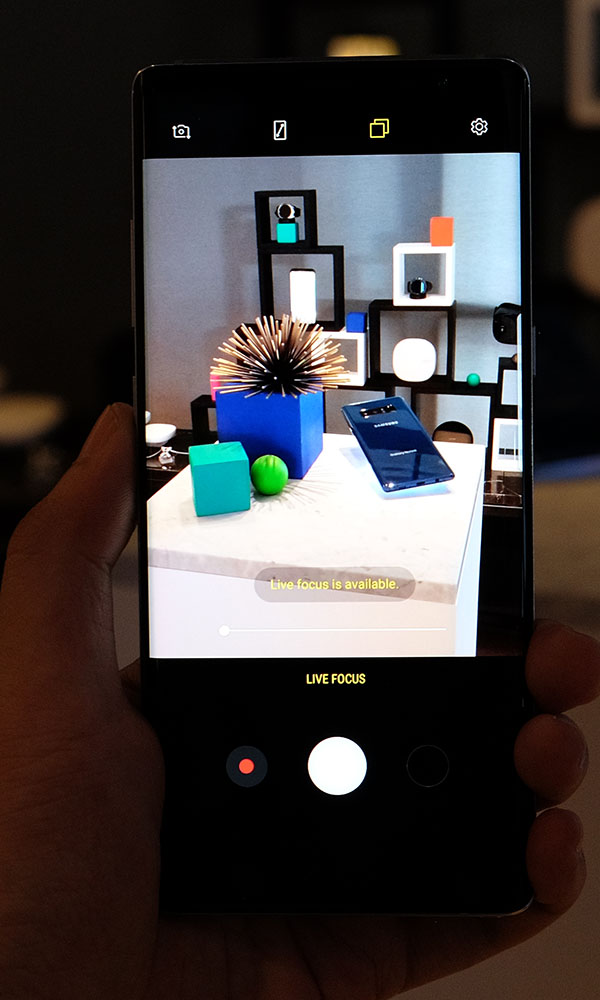 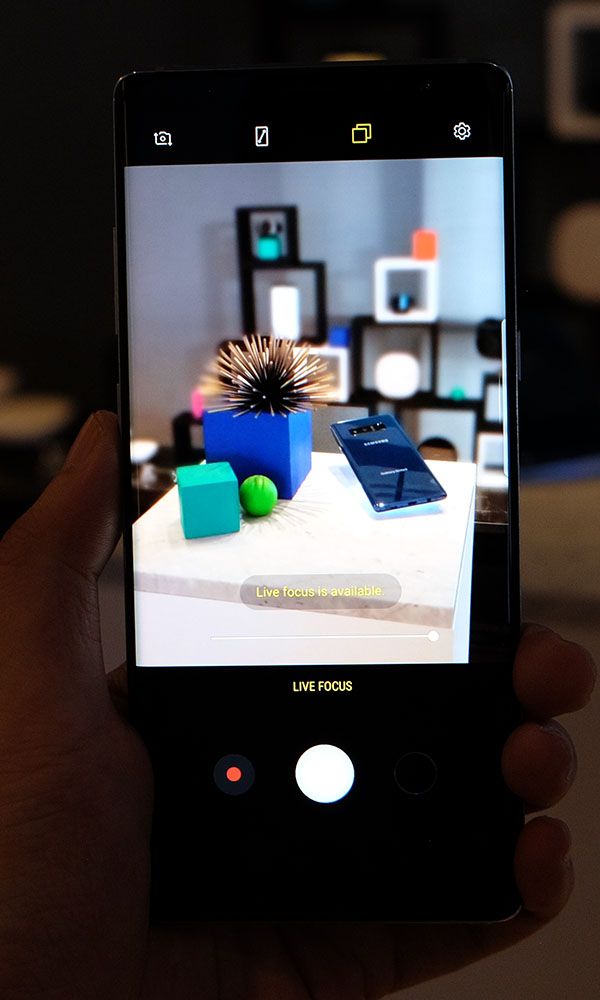 There's also a Dual Capture setting, which can be turned on when shooting in any mode and uses both rear cameras to take two pictures simultaneously - one close-up shot from the telephoto lens and one wide-angle shot that shows the entire background. You can toggle dual camera mode on and off by pressing the double square icon in the top row of the camera app.

This year's S Pen appears to be almost identical to the one we saw with last year's Note7. If you missed last year's S Pen, Samsung completely redesigned it to be more responsive and easier to use, with a thinner tip that has a radius of just 0.7mm (down from 1.6m on the Note 5's S Pen), to make it feel more like a ballpoint pen. Like last year's model, the Note8's S Pen recognizes 4,096 levels of pressure sensitivity, twice that of the Note 5. 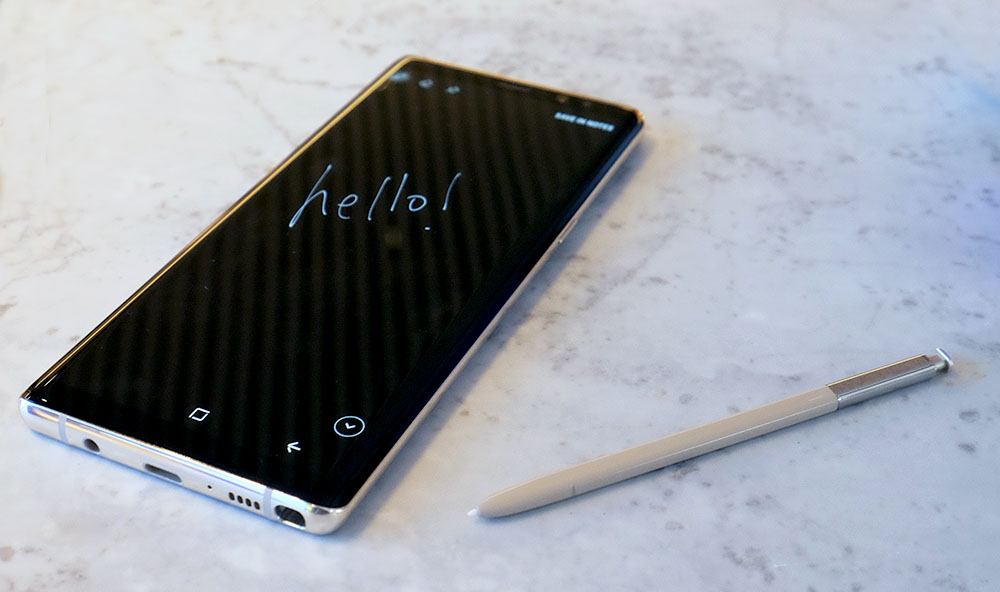 A new feature for the S Pen this year is Live Message, which lets you create an animated gif of your handwriting with animated effects around the words to send to your friends. You can use a blank background or you can choose a photo from your gallery to write on. Once you've made a Live Message, you can save it as a custom emoji to send again.

Other than Live Message, you'll mostly find improvements to the Note7's S Pen features, rather than new features. Translate will now translate entire sentences at once, instead of just individual words, and there's even a built in currency and unit converter whenever you translate something.

Like the S8, the Note8 is compatible with Samsung's Dex dock, which lets you turn your phone into a chromebook-like desktop PC by connecting it to a monitor and a wireless keyboard and mouse. There are also some nice new features on Dex that are currently unique to the Note8, but will likely be added to the S8 and S8+ in a later software update.

The first is Game Launcher, which lets you play compatible Android games in a full screen mode with your keyboard and mouse. 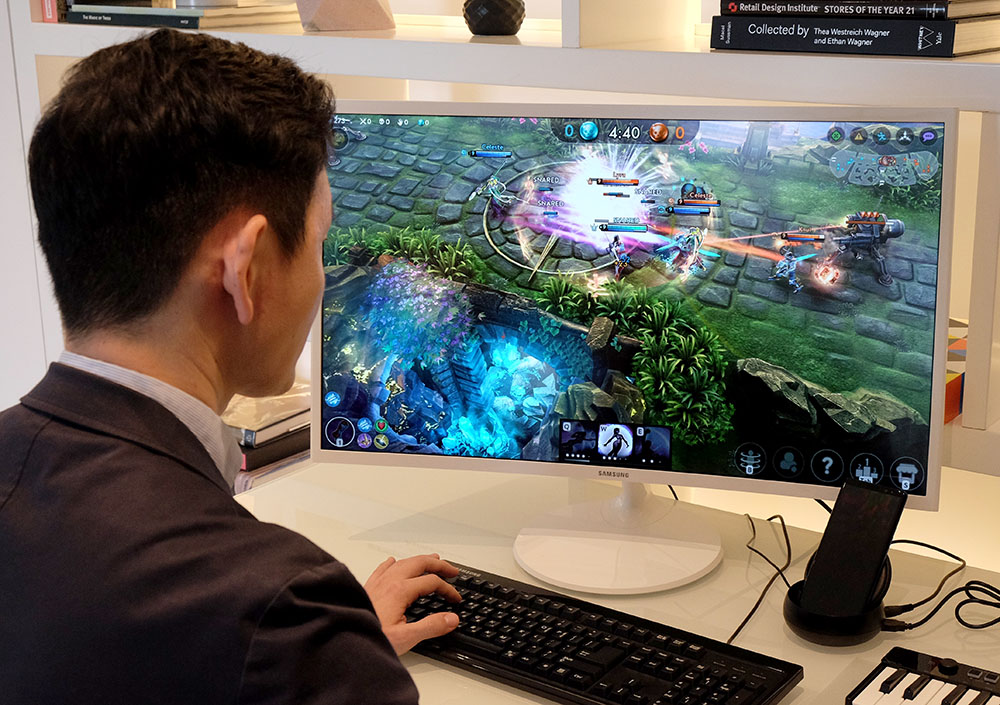 There's also a new music creation app called Soundcamp that lets you plug a USB instrument like a mini-keyboard into the Dex dock and record your own music. You can also edit music in the app.

Like the S8, the Note8 will come in two variants, a Qualcomm Snapdragon 835-powered version for the US, and a Samsung Exynos 8895-powered version for the rest of the world. Samsung has bumped the RAM to 6GB RAM (up from 4GB on the S8) and inside you get 64GB internal storage, with a microSD card slot providing up to 256GB expandable storage. It's a little disappointing that the Note8's storage controller only accepts cards up to 256GB in capacity, as many other phones will now take cards up to 2TB in size.

Unsurprisingly, Samsung is playing it safe with the Note8's battery. In fact, it's taking absolutely no chances, and has put a 3,300mAh battery inside the Note8, making it smaller than the S8+'s 3,500mAh battery, despite the Note8's larger size. Samsung has also stressed that the Note8’s battery has undergone its 8-Point Battery Safety Check, which is apparently the most rigorous in the industry.

The Note8 boasts the same security features as the S8, including dual biometrics in the form of fingerprint and iris scanner, Samsung Knox, and Secure Folder. Like the S8, you can also use the less secure - but way more convenient - face recognition to unlock your phone.

The Note8 is a fantastic phone packed full of flagship features like an IP68 build, wireless charging, and QHD always-on display. The addition of a dual rear camera setup makes the Note8 by far the most feature packed smartphone on the market - not only that, it's probably the best dual rear camera setup I've seen to date.

However, as good as the Note8 is, it just doesn't fill me with the same level of excitement I had when Samsung launched the S8 or the Note7. Samsung seems to have reached the limit of things it can do with the S-Pen, and the dual rear camera setup, while very well done, is nothing new - we've had dual rear camera phones since HTC's One M8 back in 2014. While all of the Note8's combined features are excellent, there's actually nothing groundbreaking.

The Note series used to be the go-to phone for phablet users, but with only a 0.1-inch difference in screen size between the S8+ and Note8, that's not the case anymore. Phablet-users also tend to care a lot more about battery life (because bigger screens drain battery faster) but the Note8's smaller battery capacity means that it will very likely have a shorter battery life than the S8+.

The lines between the S and Note series have never been blurrier; for now, the dual rear camera setup is enough to differentiate the Note8 from the S8, but we're almost certain to see a very similar camera setup on next year's S9. At that point, the only difference between the S and Note series will be the S Pen, which makes me wonder if Samsung should just retire the Note line and incorporate S Pen functionality into the S series.

The Galaxy Note8 will be available in retail from  15th September.
Join HWZ's Telegram channel here and catch all the latest tech news!
Our articles may contain affiliate links. If you buy through these links, we may earn a small commission.
Sponsored Links