Note: This article was first published on 2nd August 2016. 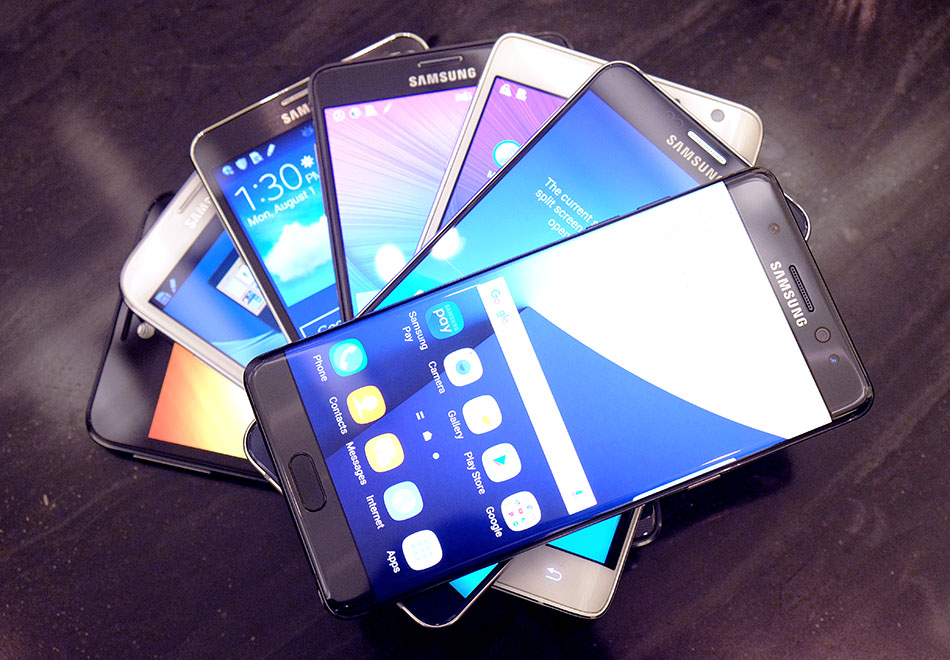 The Galaxy Note7 (for some reason, Samsung has dropped the space) is the latest addition to Samsung's productivity-aimed Note line. Samsung skipped 6 and went straight to 7 to align the device with the S7 and S7 Edge, and the Note7 offers many of the same features such as dust and water resistance, an always-on QHD display, and expandable storage. All three phones even share the same front and rear camera modules.

The Note7 will be available on 20th August for S$1,168. Registration of interest for pre-orders start tomorrow (3rd August). 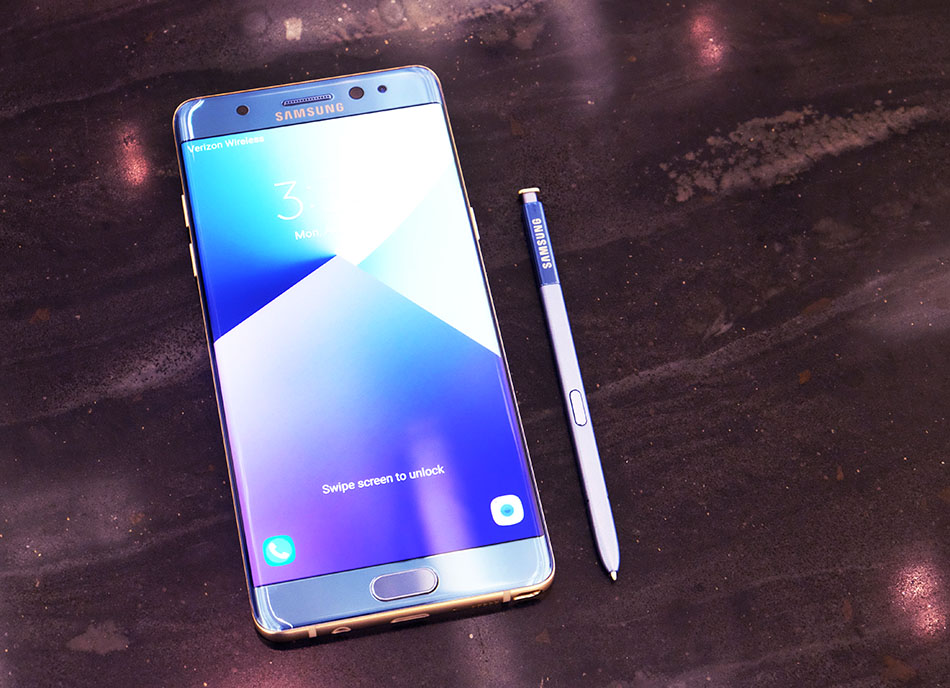 Samsung is very fond of curved glass, so we're amazed it's taken them this long to put curved glass on both the front and rear of a phone. It was worth the wait though because the Note7 is stunning. Essentially, it's got the dual curved rear of the Note 5 with the dual curved front of the S7 Edge, resulting in a beautiful perfectly symmetrical metal and glass design.

That curved rear is very comfortable in hand too, and even at 5.7-inches, I never felt like I was going to drop it.

Speaking of that 5.7-inch screen, this is the first Note device with a dual curved display (the Note Edge was only curved on one side). The curved edges has let Samsung slim the phone down, so it's actually 2.7mm narrower than the Note 5. While that doesn't sound like much, it's actually quite substantial. The rest of its dimensions are very similar to the Note 5: 153.5 x 73.9 x 7.99mm and 169g. 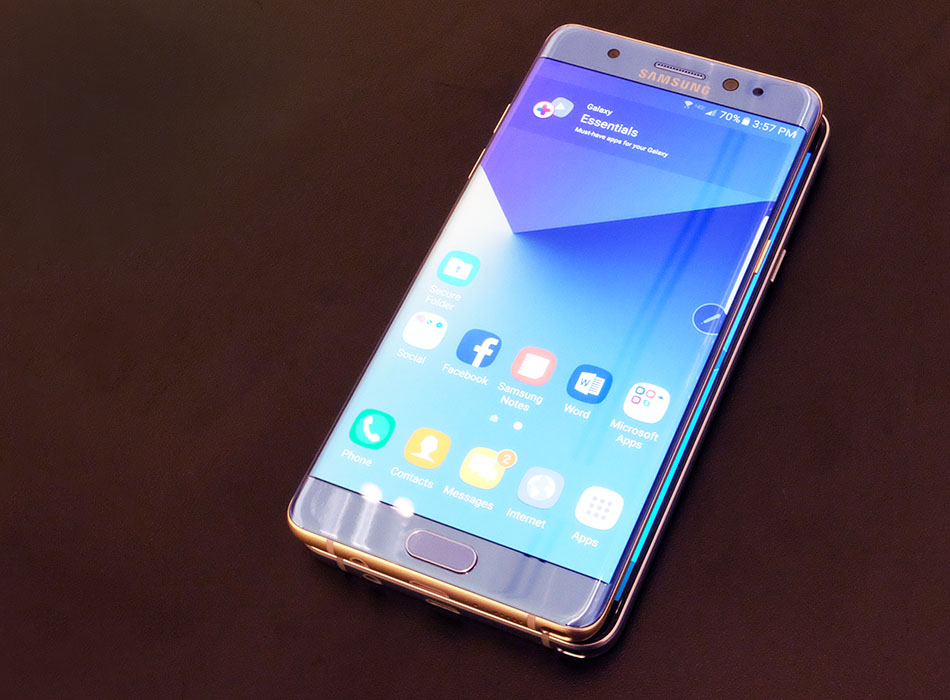 The screen itself is a Super AMOLED 2,560 x 1,440 (518ppi) pixels resolution display, and just like the S7 and S7 Edge, it's got always on functionality. Additionally, while I wasn't able to see it in action during my short session with the phone, the Note7 is one of the first smartphones armed with a mobile High Dynamic Range video streaming-ready display, which, when paired with HDR content, should provide users with a more cinema-like experience with brighter colors and deeper blacks.

On the bottom edge of the Note7, you'll find a reversible USB Type-C charging port - the first Samsung device to sport one. To ease the transition to the new port, the Note7 will also come with a micro-USB adaptor in the box, so you can still use any micro-USB charging cables or accessories you have lying around. 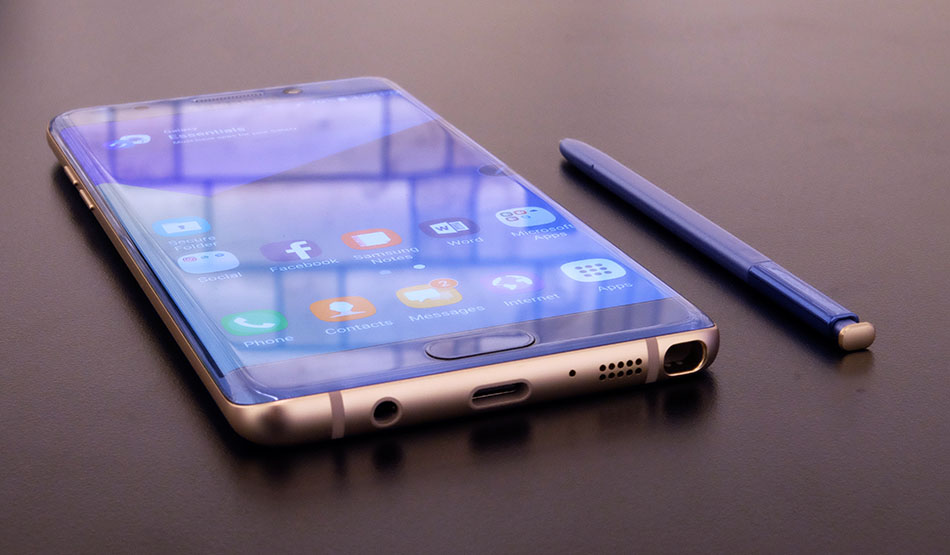 Like the S7 and S7 Edge, the Note7 is rated IP68 dust and water resistant. The S Pen is also IP68 rated, and amazingly, you can even write and erase with the S Pen underwater. 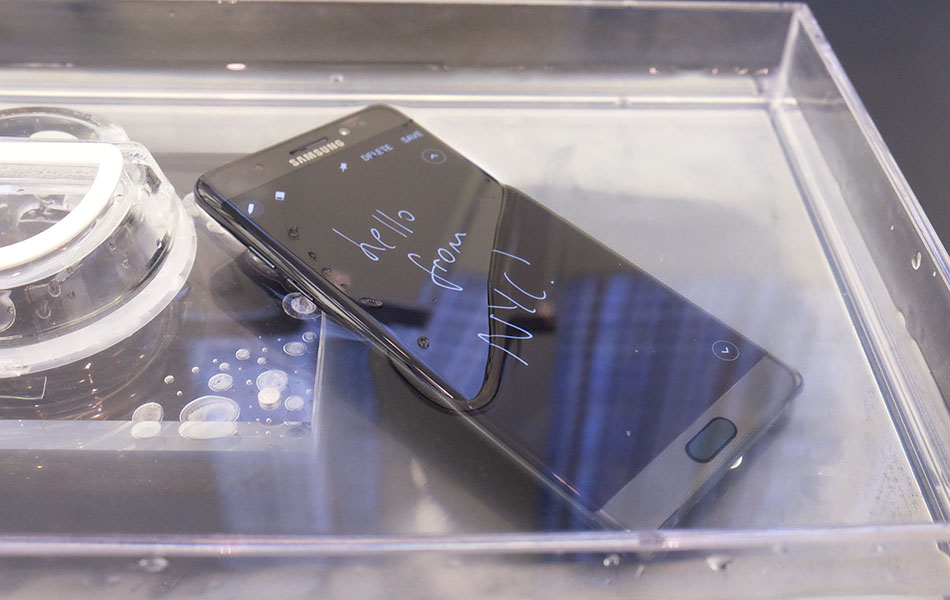 The S Pen itself has also received some minor tweaks from last year. The most substantial of which is the tip, which is now much thinner, and allows for greater precision, especially when sketching or painting. The new tip feels more like a ballpoint pen than a stylus. 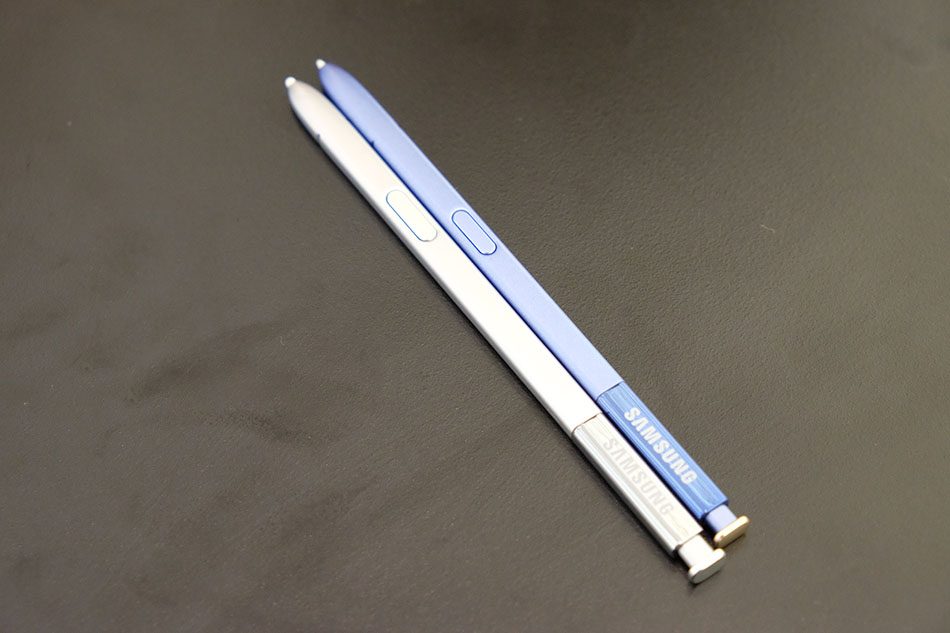 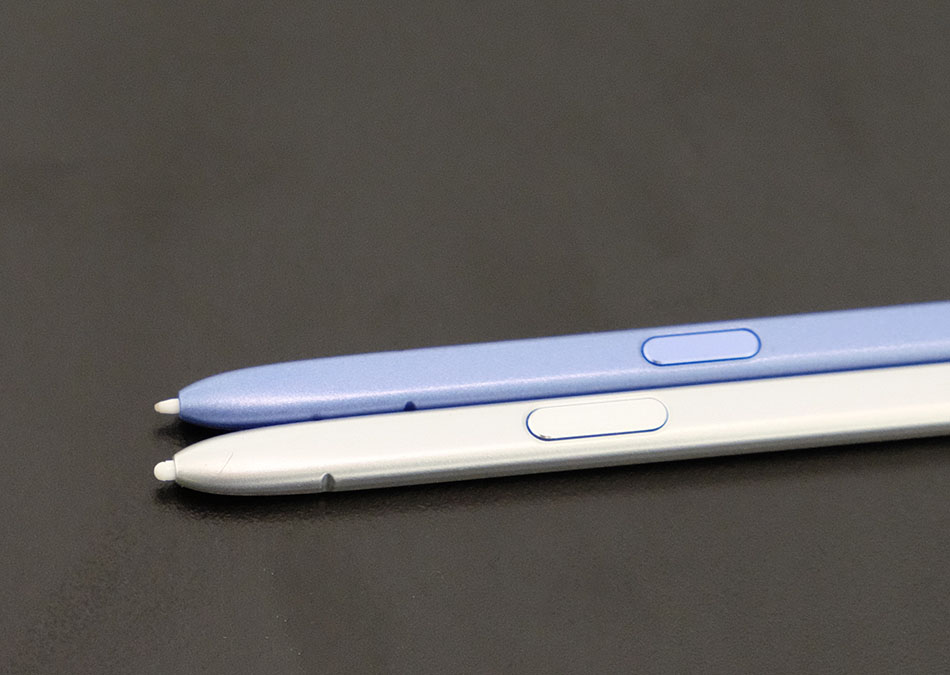 Samsung has also doubled the number of sensors on the display itself, from 2048 on the Note 5, up to 4096 on the Note7. The result is a smoother, more paper-like experience. Finally, the button on the S Pen has been shifted back slightly. This higher position is to reduce the chance of accidentally pressing it while using the S Pen.

Samsung has also made some nice improvements to the S Pen app. In the past, you had four different apps for various S Pen functions, but now everything can be found under a single Samsung Notes app. The basic handwriting notes app is essentially the same but the painting app is vastly improved. There are more color and brush options now and you can do some neat stuff like blend two colors together by drawing one over the other (previously, the top color would just overwrite the bottom one). Rounding up the app is an Image editing tool and Pen Up, Samsung's community for sharing your Note creations.

The Note7 will be available in four colors: Onyx Black, Titanium Silver, Gold Platinum, and Coral Blue. Unfortunately, Coral Blue will not be available at launch in Singapore. A pity because it's easily the most interesting color. 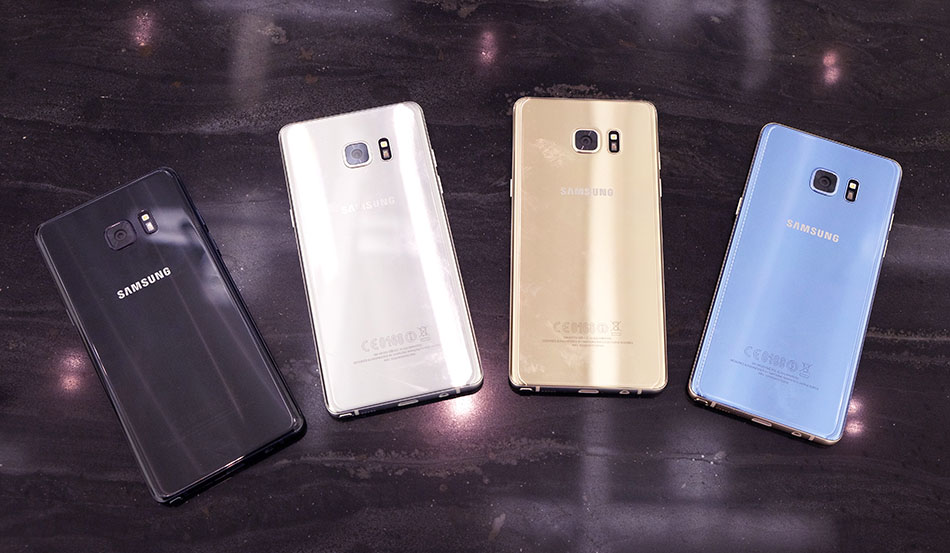 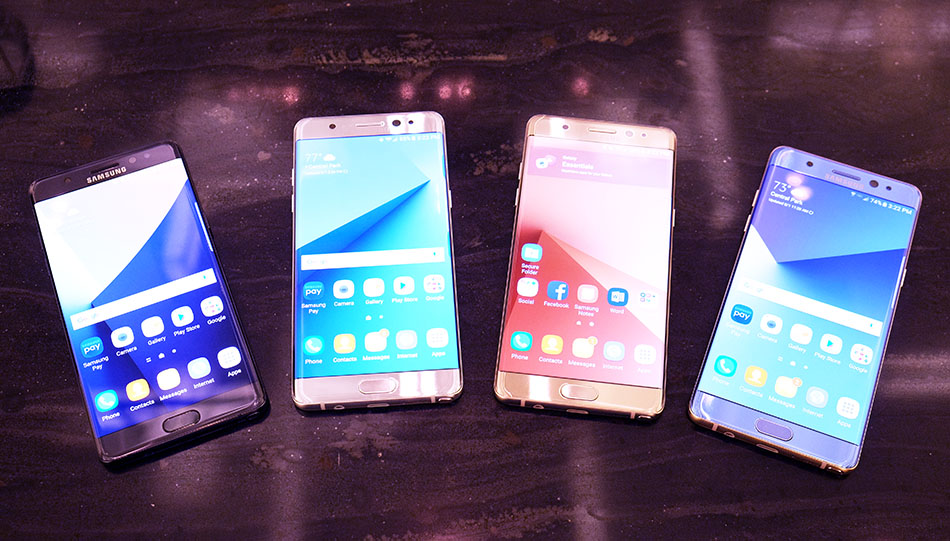 As a device aimed at productivity, it's important for the Note7 to be secure. With that in mind, the Note7 is the first Samsung device to feature iris scanning as well as a fingerprint unlock on the home button. While this isn't the first phone we've seen with an iris scanner, it's certainly the best implementation we've seen. The eye scanner is absolutely lightning fast, and appears to be just as secure as a fingerprint scanner (you won't be able to fool it with a picture of your eyes).

Setting it up is actually faster than setting up your fingerprints, but you'll have to remove your glasses to do so. Once you've got your eyes scanned though, you should be able to unlock your phone without taking your glasses off (depending on how much reflection there is off your lenses).

A nice complement to the iris scanner is a new feature called Secure Folder. This lets you store certain files in a folder behind a password or biometric protected lock, so you can safely hide all of your indecent selfies in here and feel safe passing your phone to a colleague or family member.

Powering the Note7 is Samsung's latest Exynos 8890 processor with 4GB RAM. This octa-core processor is the same processor found inside the S7 and S7 Edge. The phone runs on Android 6.0.1 Marshmallow with Samsung's usual TouchWiz enhancements.

In terms of storage, you get 64GB internally, and a dual SIM card tray, with the second SIM slot doubling up as a microSD card slot that supports cards up to 256GB in capacity.

Despite shrinking in size, the battery inside the Note7 is actually 17% larger than the Note 5's at 3,500mAh. According to Samsung, its Ultra Fast charging technology means that the Note7 will take about the same amount of time to charge as the Note 5.

Both the front and rear cameras on the Note7 are the same as the S7 and S7 Edge. On the rear you get a 12-megapixel, f/1.7, 1/2.6-inch sensor camera with phase detection autofocus and optical image stabilisation, while on the front, there's a 5-megapixel f/1.7 selfie camera. To find out the performance capabilities of this rear camera, check out this detailed article.

As always, Samsung will be releasing a number of accessories designed for the Note7. The S View Standing Cover is an interesting one as it doubles up as a media stand. The cover will be sold separately for S$68. 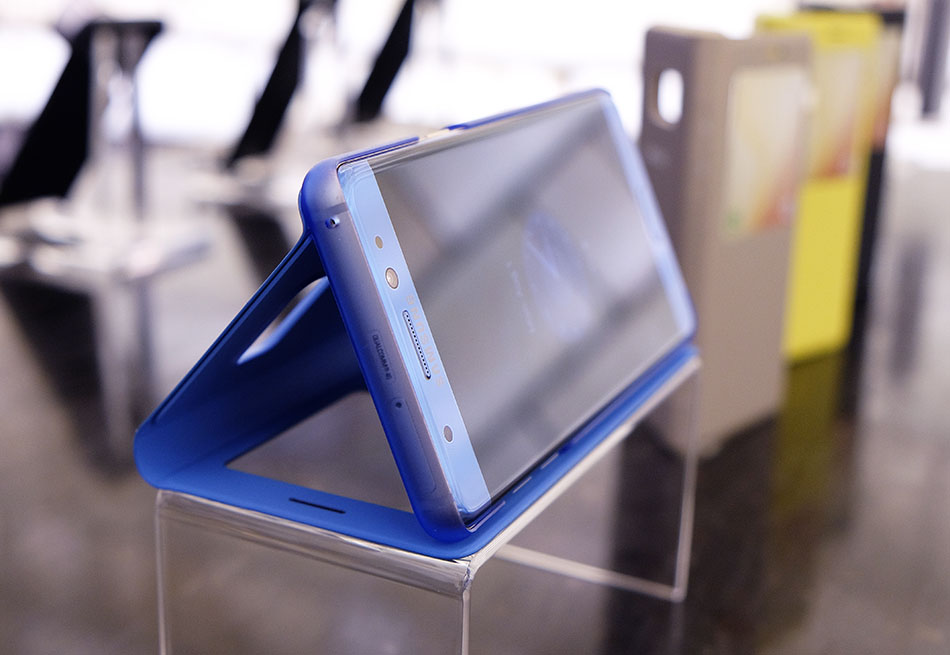 The Samsung Galaxy Note 7 will be available on 20th August for S$1,168 in the Onyx Black, Titanium Silver, and Gold Platinum colors.