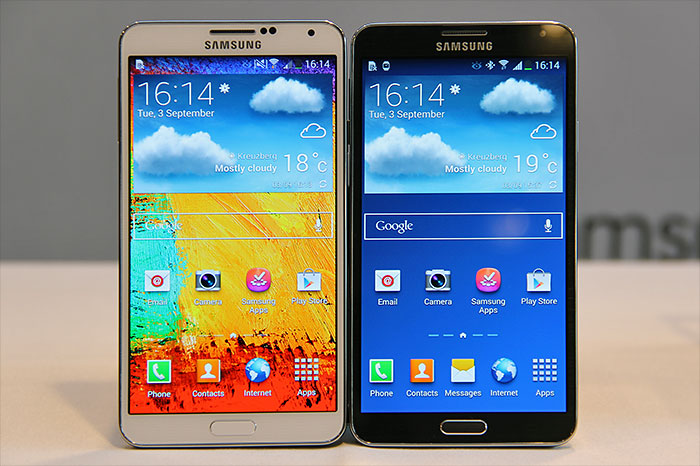 Hindsight is always 20/20. Remember when Samsung unveiled the original Galaxy Note in IFA 2011, many (maybe even us) questioned the need for a giant-sized smartphone. Not only did it look comical when you held it your ear, it was also not the most portable of devices (a lady’s clutch notwithstanding). But the 5.3-inch ‘phablet’ did sell well, finding favor especially among those who like to doodle, take notes, and watch movies on its big screen. Its success suggested to the Korean company that it was on the right track, and a year later, the 5.5-inch Galaxy Note II followed, again positioning itself as an ideal tool for creative expression, thanks to its redesigned S Pen and new S Note features. The rest, as they say, is history.

Like clockwork, at today’s pre-IFA 2013 Samsung Unpacked 2013 Episode 2 event (Episode 1 was in March, which saw the arrival of the Galaxy S4) in Berlin, Germany, the company took the wraps off the Galaxy Note 3.

Now, before this, there were many speculations of the Galaxy Note 3’s screen size. After all, since the first Galaxy Note, the series has been synonymous with large displays. Even Samsung knows it: in a Note II user survey, the large screen was rated as the number one draw, followed by brand/product reputation and hardware performance. However, with most credible phone makers now all having their own giant smartphones (the Sony Xperia Z Ultra with its 6.44-inch screen is one example), Samsung is keen to stress that the 5.7-inch Galaxy Note 3 is more than a smartphone with a large screen.

Before we go into details, here are some key specs of the Note 3, versus the Note II and a couple of recent phablets:

Hardware & Design: Gunning for the Best

If you’re a specs chaser, the Galaxy Note 3 doesn’t disappoint. It runs on Qualcomm’s latest Snapdragon 800 SoC clocked at 2.3GHz (there's an octa-core version too, but it does 3G only), has 3GB of RAM, packs a removable 3,200mAh battery, and sports micro-USB 3.0 connectivity. Battery life is a strong suit of the Galaxy Note II, and we’ve reason to believe the Note 3 will be the same. The front-end user interface is driven by TouchWiz (what else?), and in our short hands-on with it, appeared to be fairly snappy. Yes, we use the word ‘fairly’, because it still has the occasional stutters, usually during multi-tasking. But make no mistake, this is one blazingly fast device. Also, the use of micro-USB 3.0 makes for a high-speed connection between the phone and your computer.

It goes without saying that the Galaxy Note 3 has a microSD card slot for storage expansion (built-in storage: 32 or 64GB), and features the latest tech like NFC, Wi-Fi 802.11ac, and MHL 2.0. LTE Cat 4 carrier aggregation which enables peak data rates of 150Mbps is also supported, thanks to the Snapdragon 800 processor. The Note 3 also runs the latest version of Google's mobile OS, Android 4.3. Other niceties include 24-bit/192kHz audio support, and 4K video recording (not all models).

Design-wise, the Galaxy Note 3 isn’t a huge departure from its predecessor. But all the noise about the company’s love for plastic did not go unheard. The biggest difference comes from the back cover, which is now covered with a leather-like material, with stitching around the sides. The base is still plastic, but your fingers aren’t feeling plastic.

Lastly, the Galaxy Note will come in three colors: black, white, and pink. 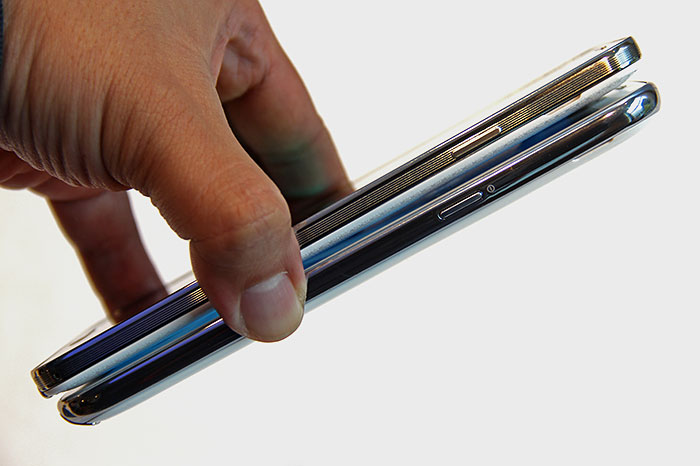 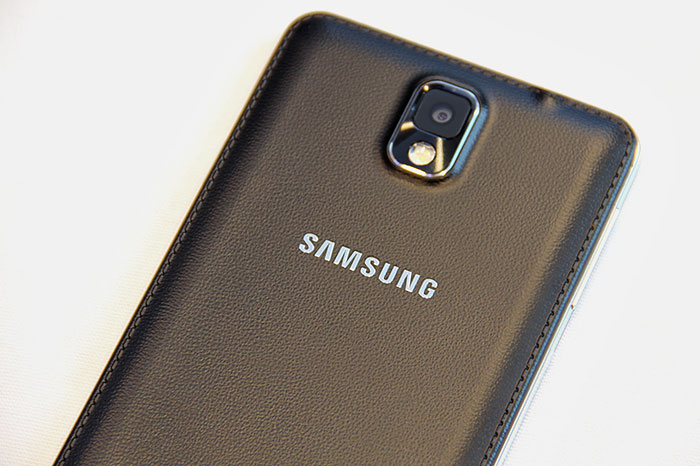 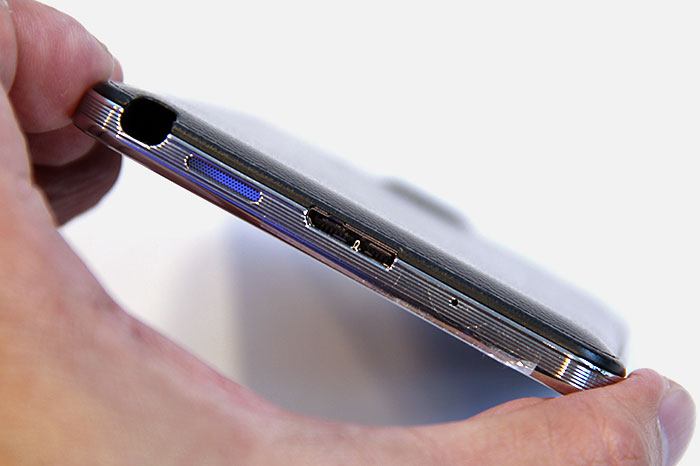 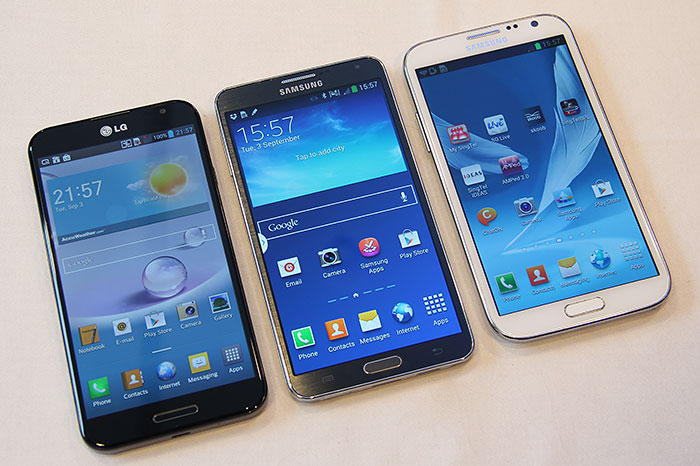 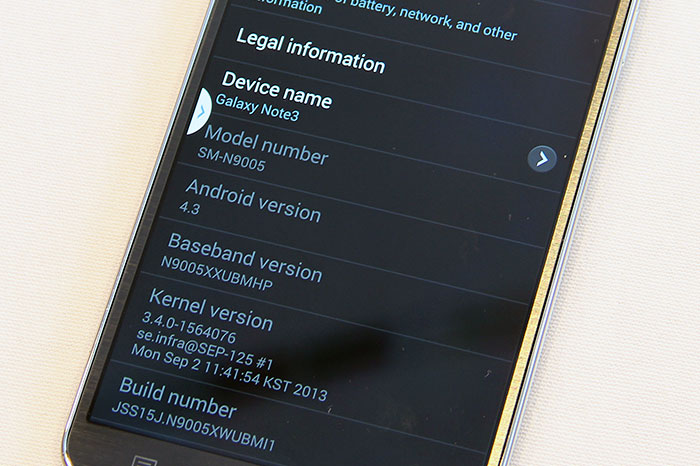 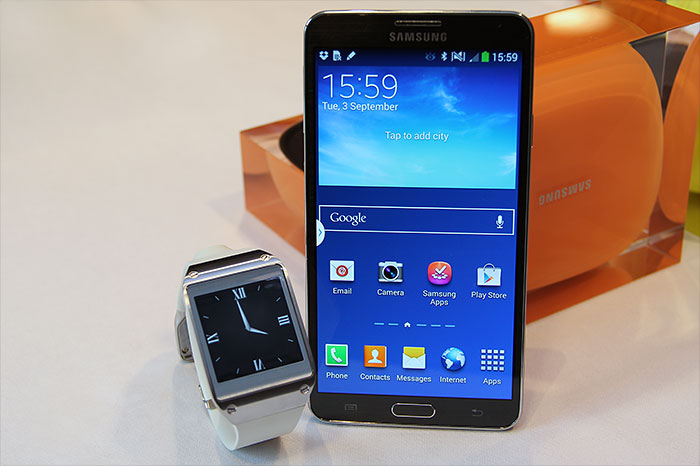 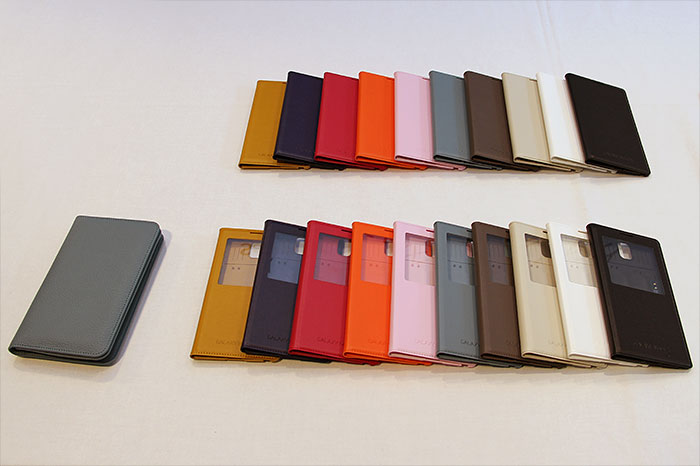 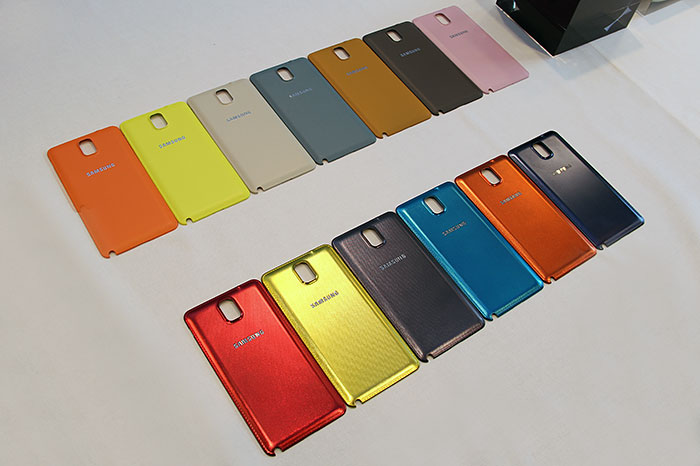 When asked what they were looking for in the next Galaxy Note, Galaxy Note II users told Samsung they wanted to do more tasks with the big screen, and also to use the S Pen (stylus) in more productive areas. More specifically, they want to use the S Pen for daily, routine tasks like news reading, app switching, and note taking. And these are exactly what Samsung set out to do with the Galaxy Note 3. By marrying a large screen, powerful hardware, and advanced S Pen features, the Note 3, in Samsung’s own words, is designed to ‘make common everyday routines easy and joyful’.

Key to this is a new feature called Air Command, which actually consists of five S Pen related features: Action Memo, Scrap Booker, Screen Write, S-Finder, and Pen Window. The Air Command wheel pops up when you remove the S Pen from its silo, or (if it’s already out) when you hover the stylus over the screen, and click on a button that’s on the S Pen. 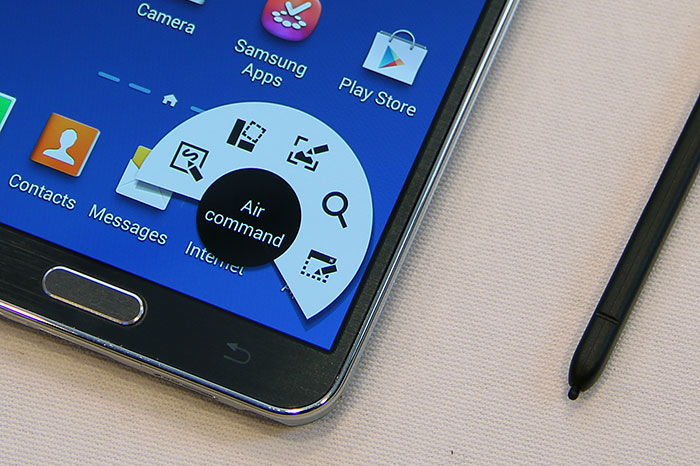 In a nutshell, Action Memo fires up a notepad overlay, allowing you to take notes. But more importantly, it also lets you take action immediately after that. For example, if you’ve just written down a phone number, just 'lasso' (select) it and call the number from a list of actions that pops up. Or if you’ve an address, just select it, and open the Maps app. The memo overlay can be minimized or maximized.

As the name suggests, Scrap Booker lets you collect any information into the Scrapbook app, be it from a website, YouTube, or audio book. For example, to send a YouTube video to the scrapbook, just draw a box around the video. Not only would the video be then embedded in the scrapbook, its metadata is also collected. Naturally, you can create categories to file your notes. In general, we found it to be a nifty content scrapping and bookmarking tool. If you collect a lot of bits of information, the time saving will be immense.

The third feature in Air Command is Screen Write, which basically lets you take a screenshot and doodle on it.

The fourth is S-Finder. While it can search the Internet, its main task is to search what’s on the device. It can search for music and files, notes (even handwritten text), pictures, email, and more. To narrow down the results, filters can be applied. For example, you can find only handwritten notes from the past 7 days that are tagged with the ‘sports’ keyword. If you let your photos logged your location, S-Finder will also be able to search this metadata. Also useful is the fact that you can use it to find a particular system setting easily, especially when you don’t remember which menu it resides in. The suggested settings will appear in the results field, and you can change what you want on the spot without firing up the Settings app.

The last tool in Air Command is Pen Window. It lets you open multiple apps in small windows, which can then be minimized into rounded icons that always remain as the first layer onscreen for you to summon later. Apps that support Pen Window include Calculator, Clock, YouTube, Phone, Contacts, ChatOn, Hangouts, and Internet (browser). One minor gripe we’ve (though it may be impossible to fix) is that when an app is maximized, it can’t be minimized again quickly. You’ve to bring up Air Command, go to Pen Window, and select the app again. 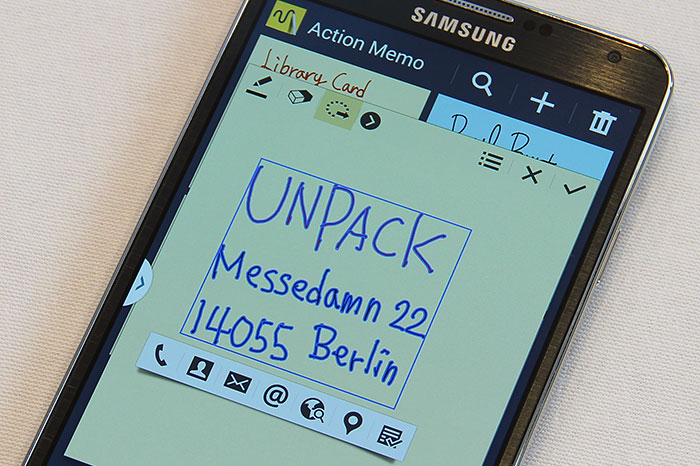 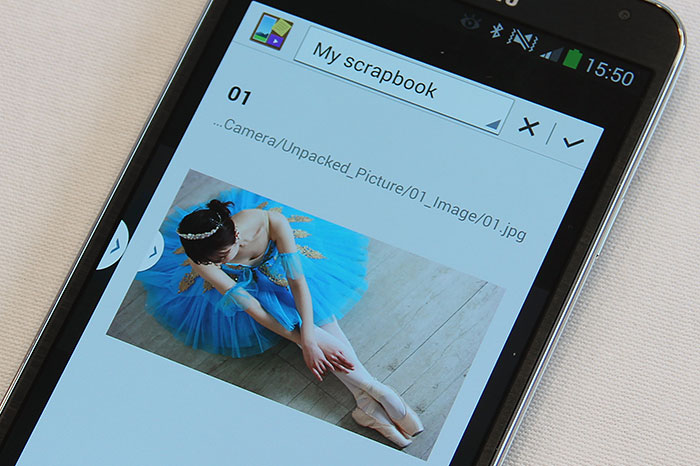 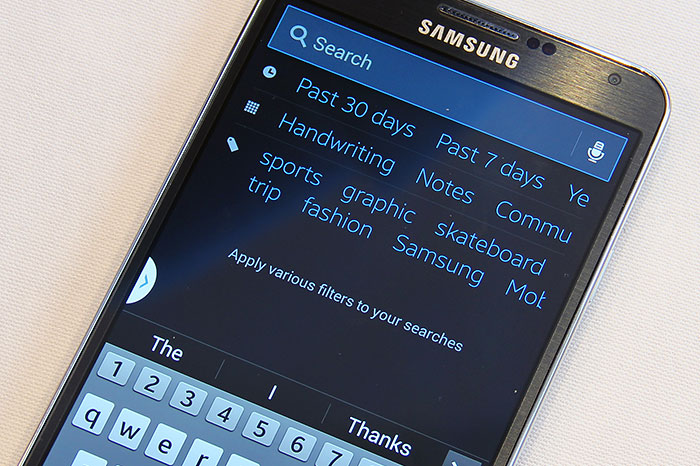 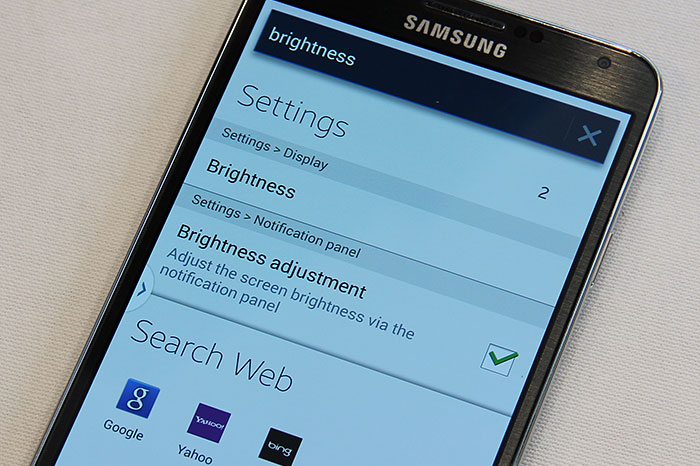 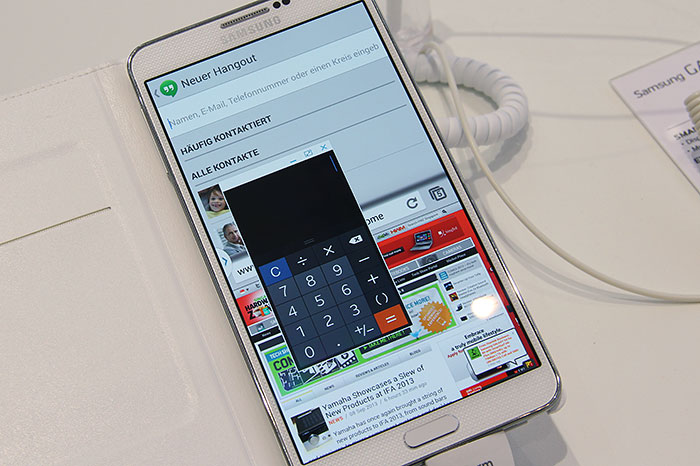 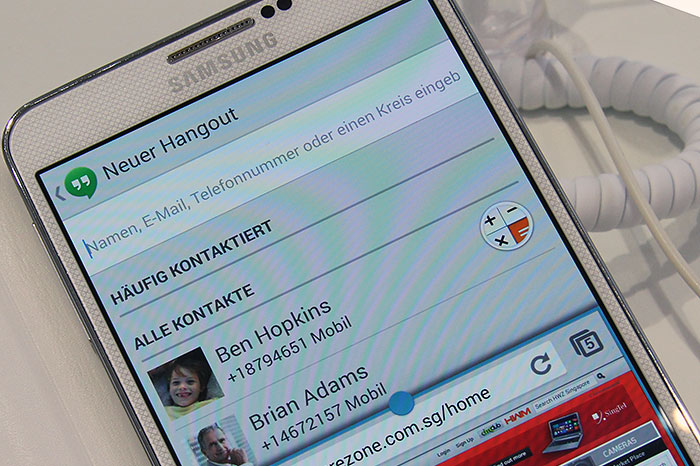 As you can see, many of the Air Command features involve multi-tasking. And these aren’t all the Galaxy Note 3 is capable of. The Multi-window feature (one of our favorites in the Galaxy Note 2 and Galaxy S4) now sports new tricks. For one, more apps can be found in the Multi-window bar. Secondly, you can drag and drop content from one window into another in a single maneuver. For example, you can drag a map and drop it directly into a messaging thread. Also, for apps like the browser and Google Hangouts, opening up two instances of an app is now possible. And if you found yourself always using the same two apps, you can create a custom 'paired window' option, so that you can restore the apps/layout easily in the future.

S Note, a popular app among Note users, is also getting an upgrade. Besides an improved UI and an Easy Chart and Easy Clip cropping features, the new S Note can now also sync with Evernote or a Samsung account.

Another new feature (though comparatively a smaller one) is My Magazine, which brings together your personalized news and content (including those from social media) in one place. To bring it up, simply swipe upwards from the bottom of the screen. From then on, swiping left or right cycles through the categories, while swiping up and down cycles through the content when you’ve entered a category. My Magazine is developed through a partnership with Flipboard. 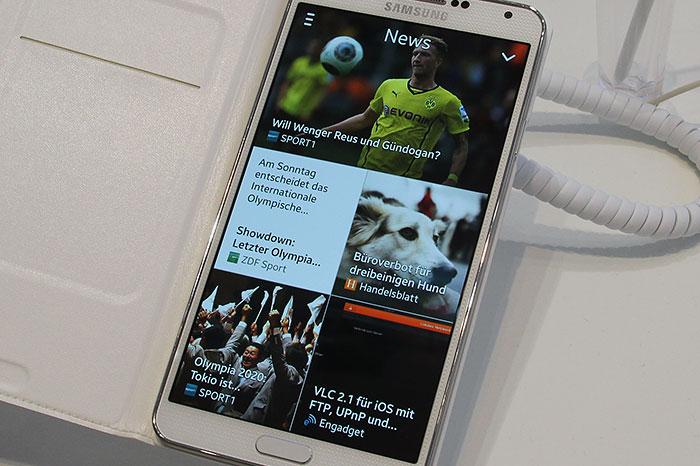 As usual, keep your eyes peeled on HardwareZone, as we bring you more info on the Samsung Galaxy Note 3, and of course, review in the near future. Worldwide availability starts from 25th September, but there aren't any specifics on per-country roll-out (e.g. there's no launch date yet for Singapore) or the price points at the point of publishing. In the meanwhile, if you're into wearable tech, why not check out the Galaxy Gear smart watch, which is designed to be the perfect companion device for the Note 3.