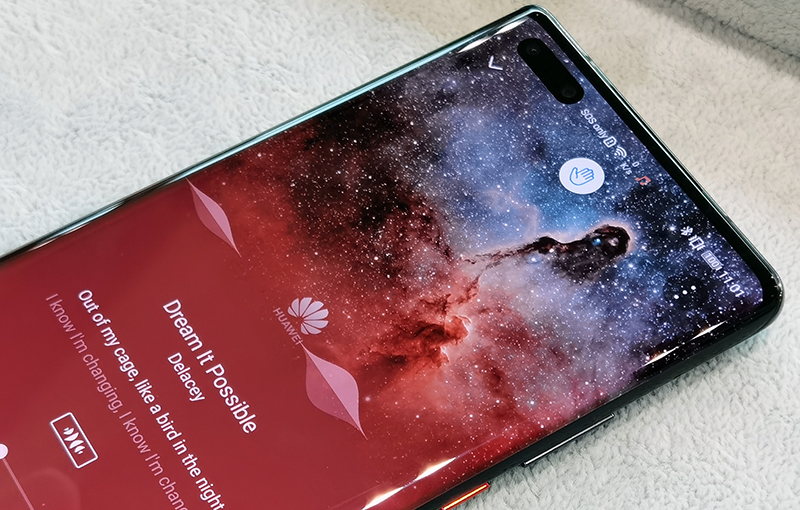 Prior to Huawei's official launch, the HWZ team had a chance to fondle the flagship, 5G capable Huawei Mate 40 Pro and understand what it offers to its users. 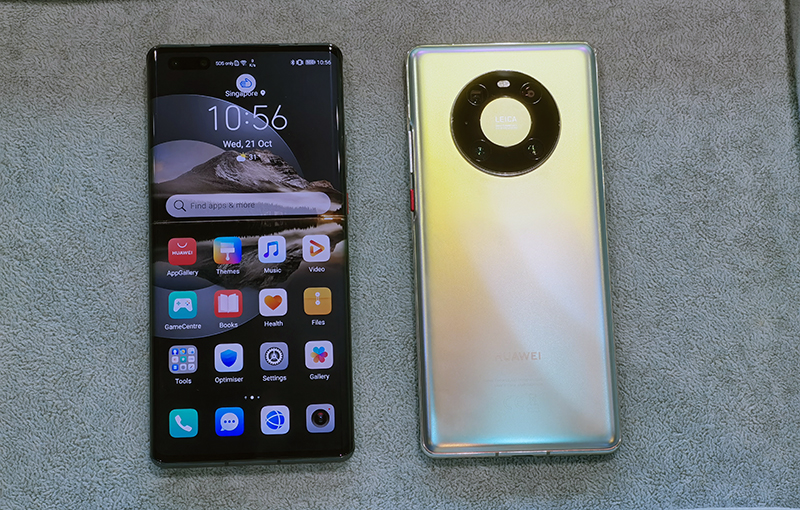 The design leaks proved true - circular emblem on the Mate 40 Pro's rear is a ring around the various camera housings. Form follows function, which gave rise to Huawei's Space Ring Design that envelopes the cameras. It's quite similar to the Mate 30 Pro's design choice, but somehow the Mate 40 Pro manages to improve upon an old look. They removed the embossed ring and gave Leica a prime position to announce its involvement in Huawei's smartphone cameras. 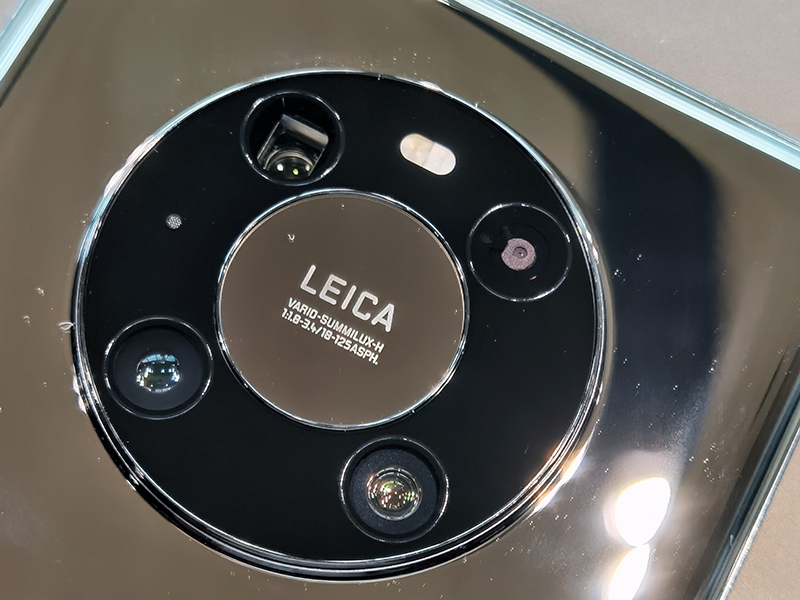 Two colourways were available at the demo - Black, and the iridescent Mystic Silver. The colour-shifting effect on Mystic Silver would be great for distracting people who love shiny objects, while Black offered a balance between premium corporate and after-work. Other variants at the global launch included White, and two vegan leather variants - Sunflower Yellow and Olive Green. 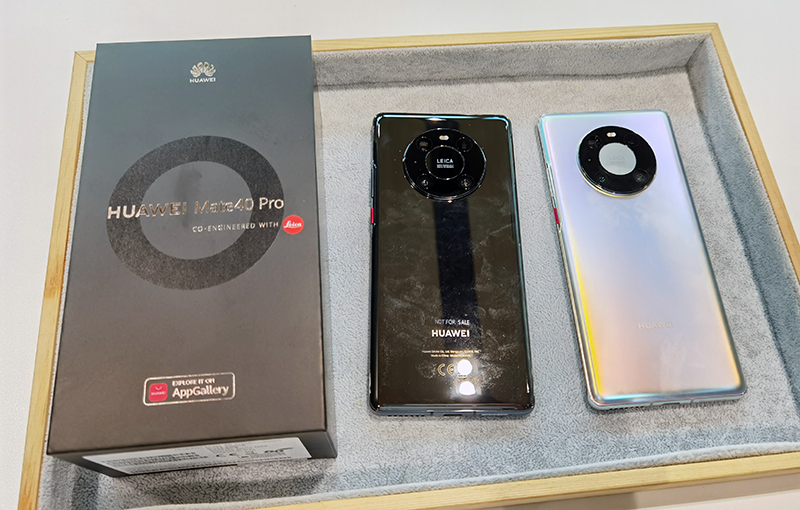 Between the two colours that were present, Black was more prone to attracting fingerprint smudges. Both are undeniably high-quality in appearance, even if they weren't the most uniform in design. For example, the high shine on the Black's rear is just as manicured as the sides, which brings out the lines that separate the rim from the back. 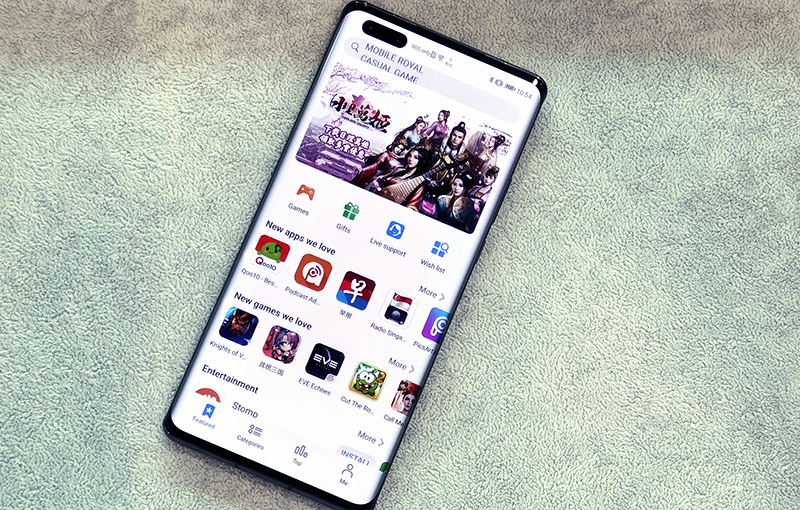 The Huawei Mate 40 Pro greets us with a 6.76-inch OLED display rated at 2,772 x 1,344 pixels resolution and 90Hz refresh rate. It's just a couple pixels shy of full Quad HD resolution (1440p), but the OLED panel still packs a pixel density of 456 PPI, making it sharp and pleasing. The display is slightly less saturated than the P40 Pro+ we had on hand, with the Mate 40 Pro offering a more neutral gamut than its more saturated P40 brethren. 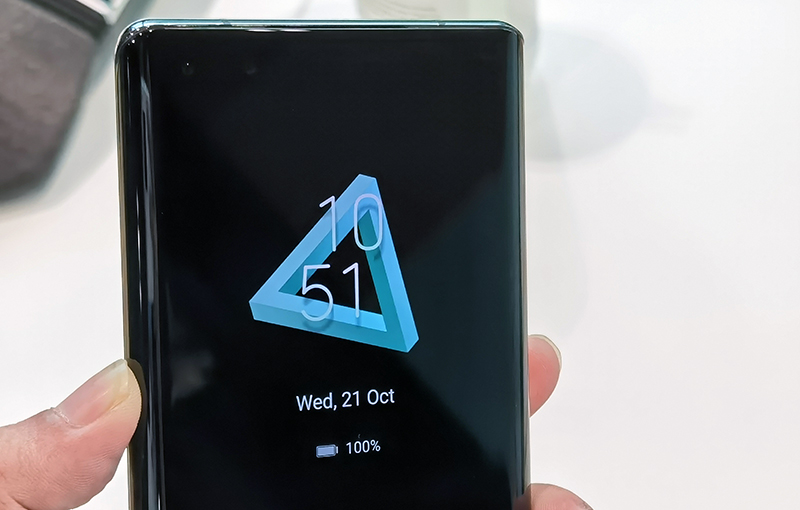 An interesting, new display feature is Eyes On Display. The interface is similar to an always-on display found on other Android devices, but the Huawei Dynamic always-on display (AOD) only turns on when you make eye contact with the Mate 40 Pro's front cameras. On paper, the technology to make Eyes On Display sound fantastic. In practice, we're not so sure how is it any better than iPhone's Raise To Wake (where the phone wakes up the screen when you lift it, no eye contact needed), or if it's any more convenient than conventional Android AODs where you can side-eye your phone to check the time quickly. 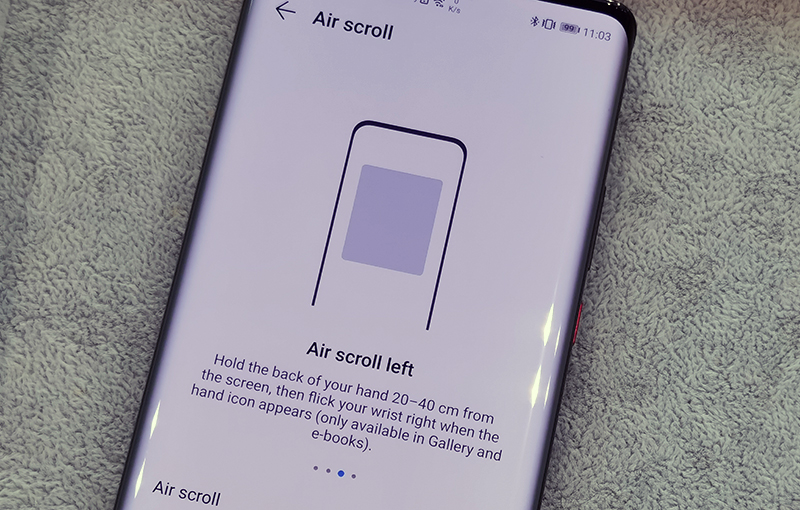 We tried out the improved Air Scroll gestures that Huawei brought to Mate 40 Pro. New to the series is the sideways hand wave, a "hand press" gesture for pausing and playing songs, and a hover gesture to turn on the locked screen. They join the existing up-down wave gesture for scrolling text, and the palm-to-fist motion for taking screenshots.

Air Scroll is quite nitpicky about the way you place your hand in front of the camera. If you put your palm up, it will assume you are either scrolling up or down or taking a screenshot. Flipping left to right would require you to hold the hand up sideways, with all your fingers already to one side, so it can tell you're about to swipe.

Despite that, we've managed to try these gestures on the Mate 40 Pro built-in apps. It's responsive but nowhere as responsive as navigating the phone regularly. The phone needs a split second to register your palm, and it takes another moment to do what your gesture meant. We still think it has great use - for example, it's much easier to skip songs using these gestures if you can't afford to control the phone with precision (e.g. halfway through preparing food in the kitchen, working out to songs, etc.). 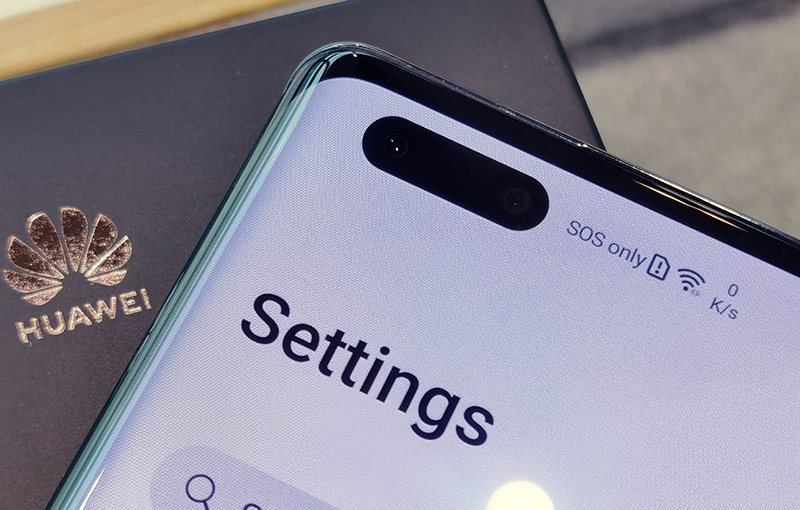 Speaking of gestures, the Mate 40 Pro detects all these with its dual front cameras. One is a 13MP Selfie camera with f/2.4 aperture, while the other is a 3D depth-sensing camera that does all the heavy lifting outside of photo-taking. The dual front camera sits inside an oblong cut-out. Huawei shifted them to the top-left corner of the Mate 40 Pro, which is similar to how Huawei manages the front cameras on the P40 Pro+. 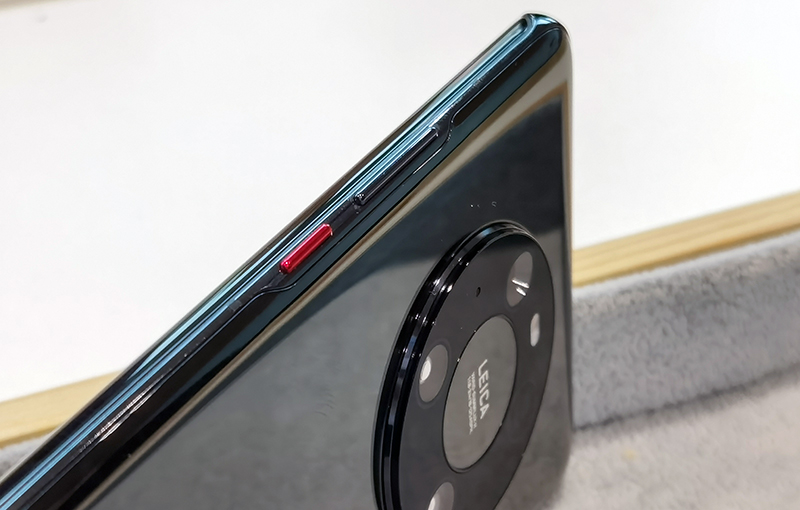 The triple-rear camera configuration co-engineered with Leica comes with a 50MP wide-angle main camera at f/1.9, a 20MP ultra-wide angle shooter at f/1.8, and a 12MP telephoto lens at f/3.4 with Optical Image Stabilisation and 5x optical zoom. The lenses together offer 5x optical, 10x hybrid, and 50x digital zoom.

More details can be found in our news coverage, as we've only managed to test the main camera on the rear. At first glance, it looks like it does the job responsively and accurately, but we'll need to wait until a full review to know how it measures up against what's out there. 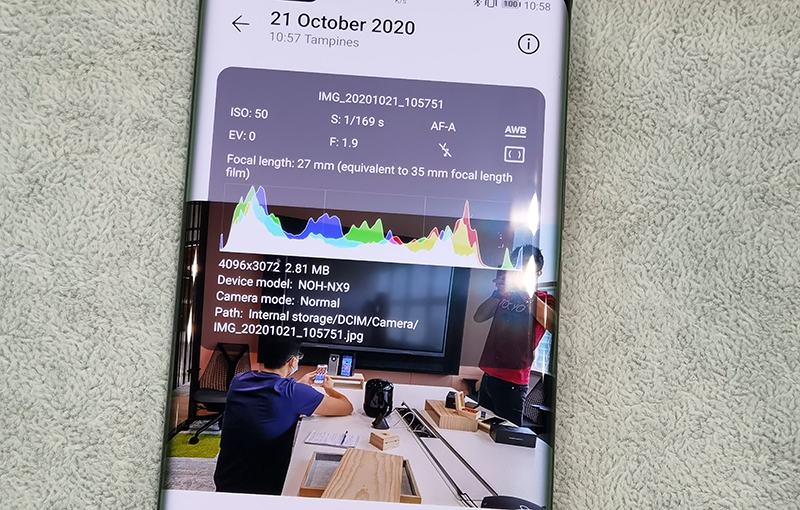 Of course, it would be remiss to talk about Huawei and not mention the Mate 40 Pro's user interface or its chipset choice, seeing how those two things have gained interest beyond tech enthusiast circles. The Huawei Mate 40 Pro uses an EMUI 11 reskin on Android 10, but the phone still runs Huawei Mobile Services (HMS) instead of GMS.

You're getting your typical HMS substitutes, such as AppGallery instead of Google Play Store. However, like previous HMS-powered phones, many hyper-localised apps (like our banks, food delivery, ride hitching apps) already have an AppGallery version available. Other Android apps (especially games) can still be side-loaded onto the phone using third-party app stores. Heck, you could even install Huawei's Petal Search app, which is effectively a search engine for said third-party apps. 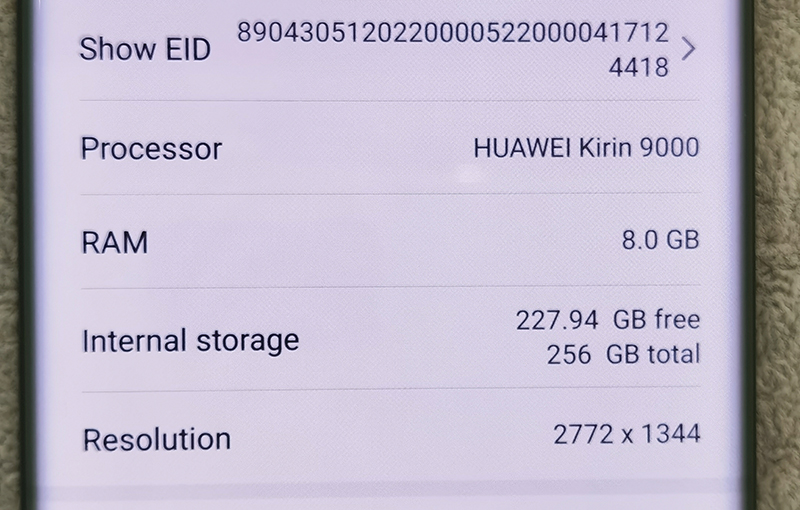 The chipset is none other than their latest flagship processor, the Kirin 9000. The performance is markedly better than its predecessor, but we've saved that bit for our news coverage since this hands-on is more about the look, feel, and usage of the Mate 40 Pro. 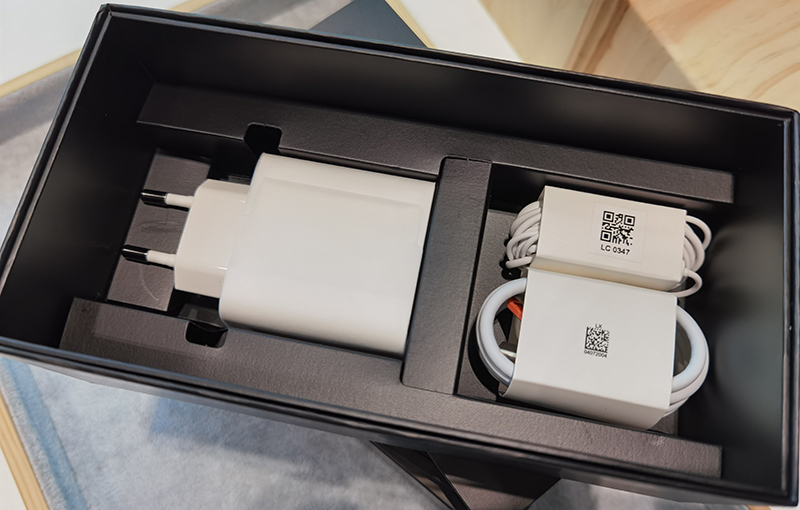 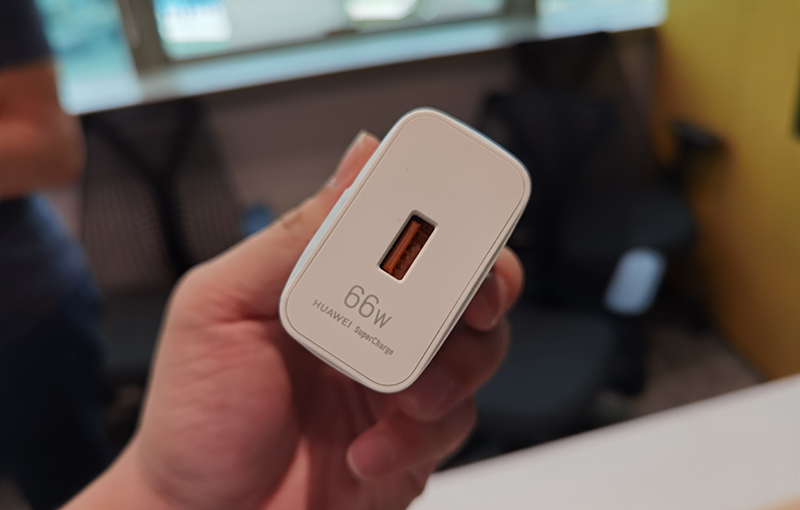 We'll update the piece with local availability and pricing after it's out.