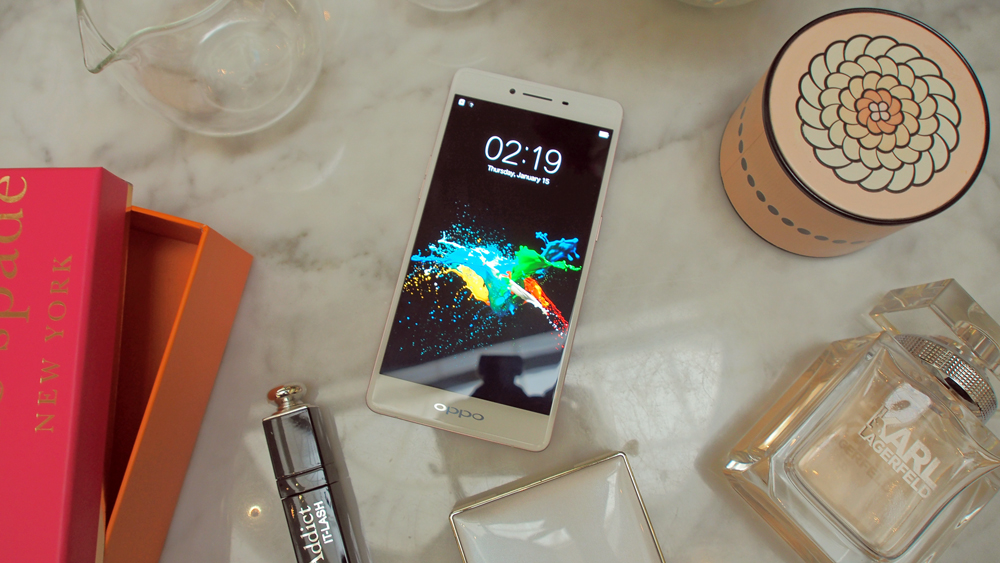 The Oppo R7s is a new 5.5-inch phablet with 4GB RAM and Snapdragon 615 octa-core processor. The phone will retail for S$599 (32GB), beginning 26 November 2015 at SITEX. The R7s will be available in Gold first, with a Rose Gold option coming later in December.

We had the opportunity to get some first impressions of the device. Without further ado: 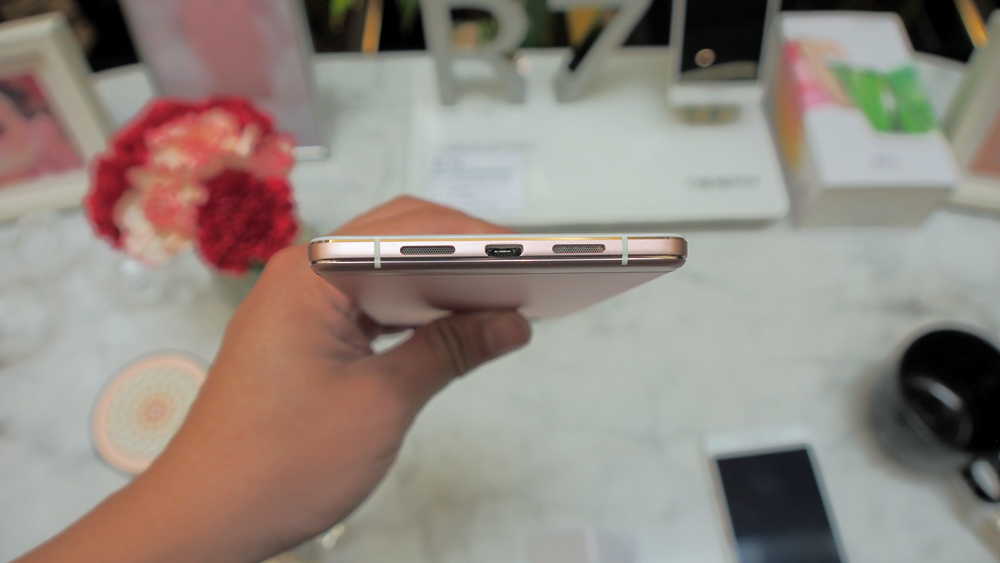 The Oppo R7s Super AMOLED display size sits in between the R7 and R7 Plus, at 5.5-inches. It has a Full HD resolution at 1,080 x 1,920 pixels, giving us a pixel density of 401ppi. Like the other phones in the R7 series, the R7s phone boasts a premium full-metal build. It also has a 2.5D Arc Edge screen, which curves the glass edges to give the user a better grip on the smartphone. Our first impressions with the R7s was interesting, as the 2.5D Arc Edge screen felt smoother along the edges, compared to the Oppo R7 and R7 Plus (which was also on display). That’s a good fix, since it gives the impression that there’s a higher quality to its design. Further physical improvements include moving the audio from the rear to the bottom edge, preventing muffled audio if the Oppo R7s happens to be placed on a flat surface. The camera module does not feel protruded, although there’s a visible raised rim around the rear camera lens. The phone measures 151.8 x 75.4 x 6.95mm, at 155g – it’s quite a comfortable fit in the hand, and it certainly feels very light. 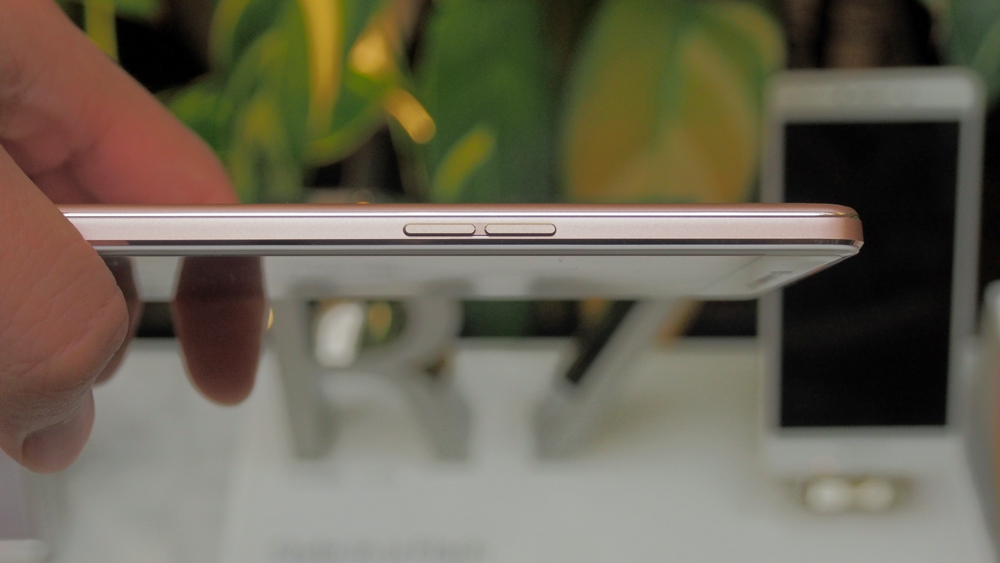 The R7s runs on Android 5.1 Lollipop, with Oppo's ColorOS 2.1 running on top. 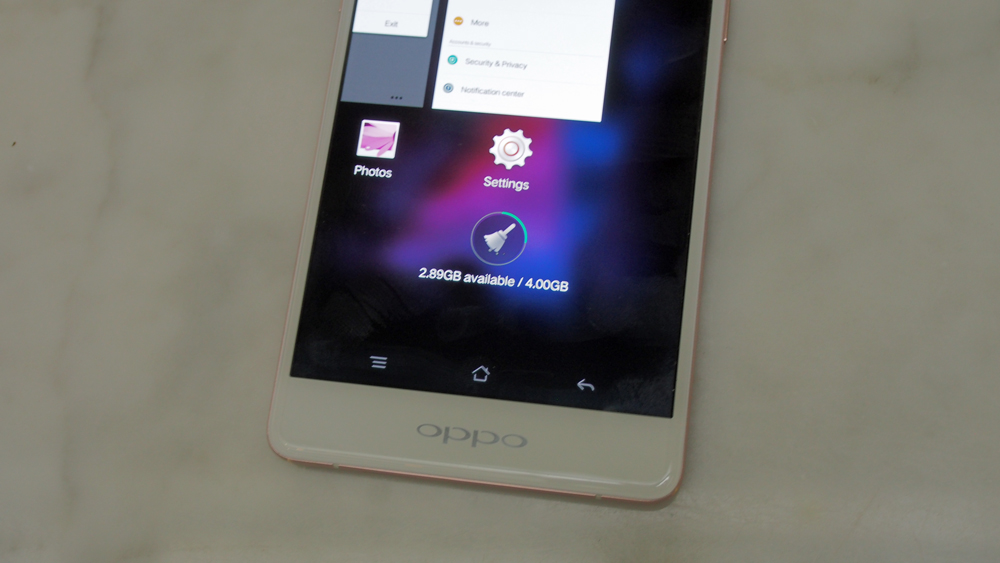 An interesting feature on the Oppo R7s is Automatic Cleaning, which closes apps that are open but inactive for 10 minutes and beyond after the user locks the phone. Another pretty unique feature is Eye Protection display, where the phones gives the user the option to filter out shortwave blue light, which helps to reduce eye strain during smartphone usage. You can pick between different filter intensities (Low, Medium, High) for better or less eye protection. ColorOS 2.1 also comes with Screen-off and Screen-on gestures – one of Oppo’s very first features from their earlier phones – where you can open apps or control the music player with gestures drawn on the screen. 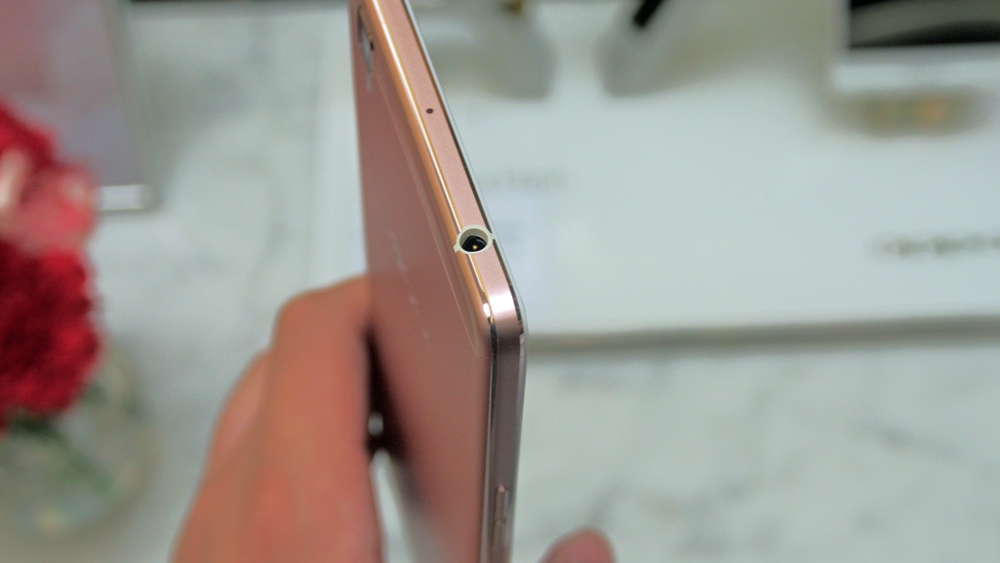 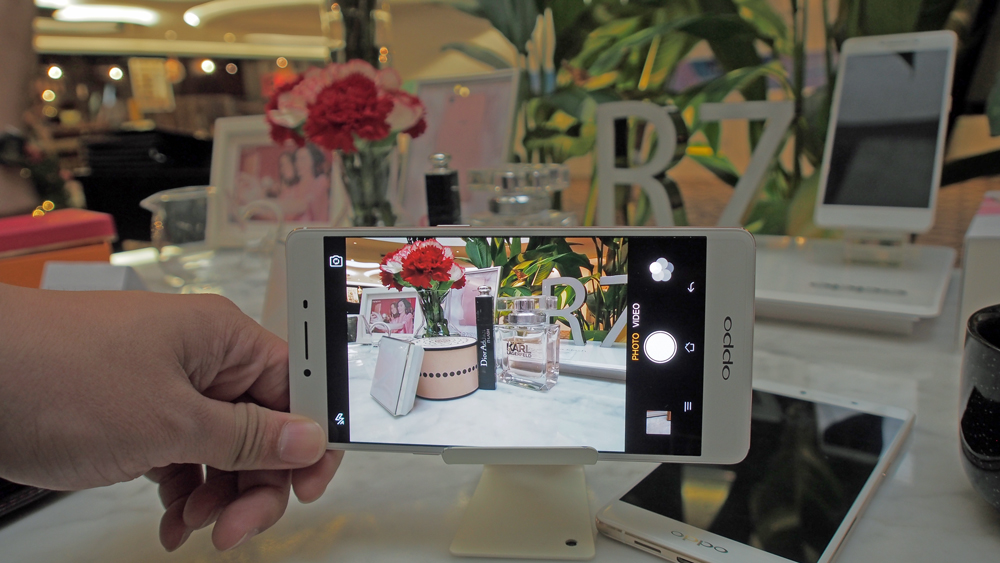 The Oppo R7s touts a 13-megapixel Samsung ISOCELL 3M2 rear camera. It comes with an f/2.2 aperture, making it capable of taking well-lit photos in lower light conditions. The camera comes with a few add-ons for a better photo-taking experience. It has Hybrid AutoFocus, which is a combination of Phase Detection Autofocus and Contrast autofocus techniques. The rear camera supports shooting in RAW format, as well as an Ultra-HD Mode, where it uses the 13-megapixel rear camera to produce a 50-megapixel image. The 8-megapixel front camera uses an Omnivision camera module. 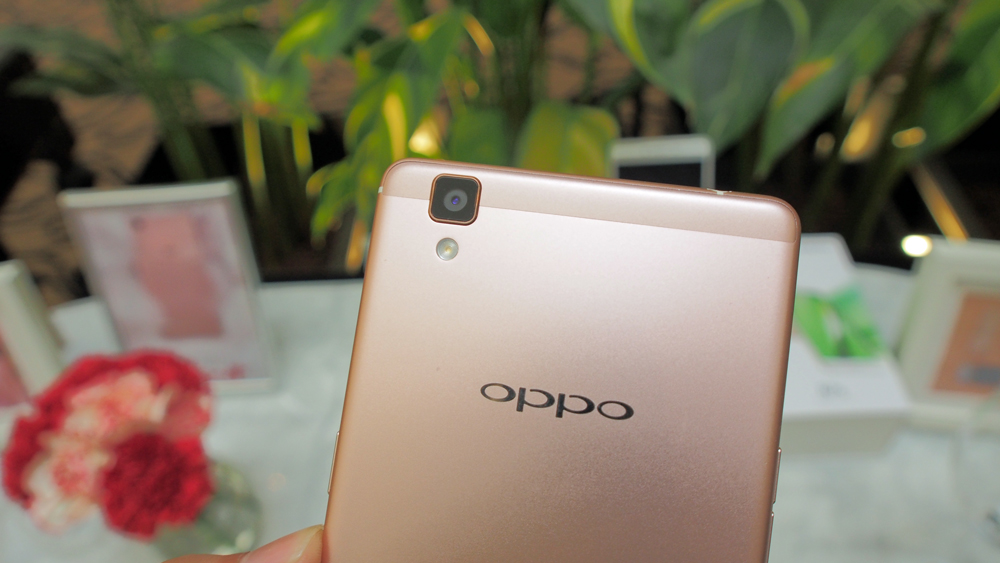 The Oppo R7s also comes with some light-hearted camera features as too. For selfies, the R7s helps with Beautify 3.0. It also has software-based Anti-Shake Optimization for users with shaky hands. 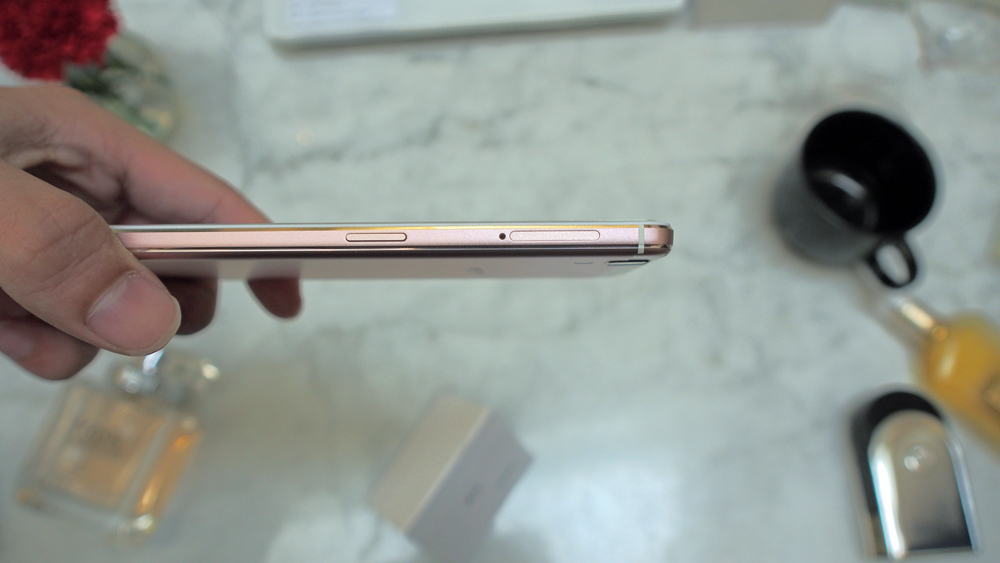 The battery capacity on the R7s is a generous 3,070mAh, made even better with VOOC Flash Charge. Oppo claims that their proprietary fast-charging system is proprietary can charge from 0% to 75% in 30 minutes, and up to 90% in 50 minutes, as well as having enough for two hours’ worth of talk-time with five minutes of charging. Oppo’s lab tests – which had a mechanical arm that simulated real-world usage of the phone’s functions – concluded that the Oppo R7s could survive 13 hours and 15 minutes with continuous usage. 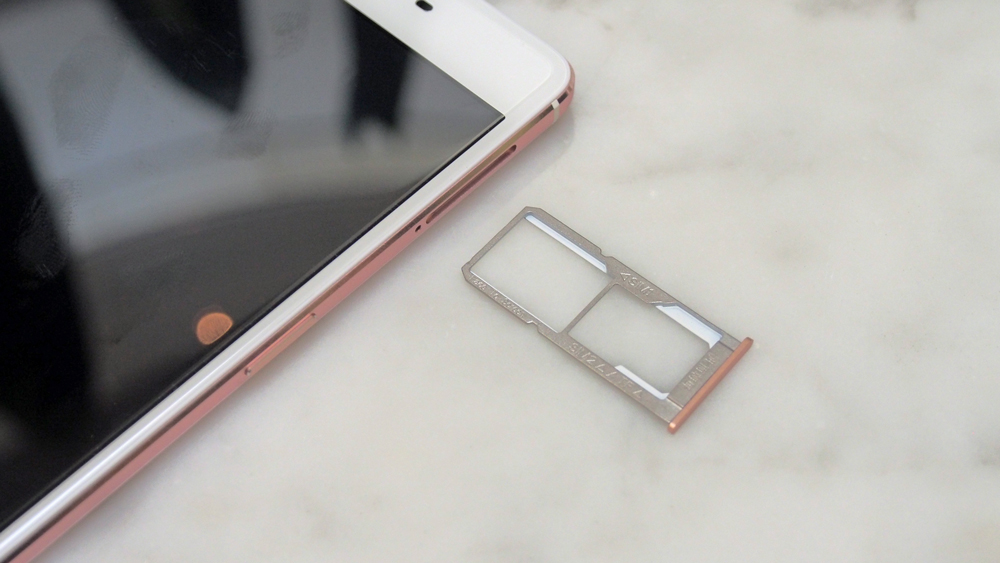 The dual-SIM feature on the Oppo R7s allows the smartphone to carry two SIM cards with LTE compatibility in both slots. SIM 1 slot is for a Micro-SIM card, while SIM 2 slot is for a Nano-SIM card. SIM 2 slot also doubles as a MicroSD card slot (expandable up to 128GB). Other connectivity support includes Wi-Fi 80.211a/b/g/n/ac, and Bluetooth 4.0.

The Oppo R7s comes in two colors for the Singapore market – Gold and Rose Gold (coming in December). The Oppo R7s is also one of the first commercially available Android OS smartphone with a Rose Gold color. As mentioned above, the Gold version starts selling on 26 November 2015 at SITEX, and the Rose Gold will start selling in December 2015. Both phones will be able at Oppo Concept Stores (one in Suntec and one along Geylang Road), as well as all Singtel, M1, and StarHub stores. The Oppo R7s will retail at S$599.