ASUS TUF Dash F15 Review: An all well-rounded notebook for both gaming and work
Event Coverage

A Forged Relationship Between Nokia and Microsoft

2010 is also a year of partnerships for Nokia. During Mobile World Congress, it made its major announcement of the upcoming Meego platform, a collaboration between Nokia's Maemo OS and Intel's Moblin platform into a new mobile ecosystem. Even before, Nokia had a vested interest with Microsoft, in the form of its Mail for Exchange service that allows Nokia devices to hook up to Microsoft Exchange Activesync protocols.

And now, we have the Microsoft Communicator Mobile, and as its name implies, is a communication tool that mirrors Nokia's earlier Nokia Messaging app. While the latter is aimed at the consumer level with its instant messaging and push email offering, the Communicator Mobile app looks towards the corporate world. In essence, the application taps onto the company's existing Microsoft Office Communications Server, allowing you to have a seamless mobile and PC experience for instant messaging and mail experience. Further to that, contact integration is present within Communicator Mobile, bringing together calls, messaging (both text and internet) and emails for all folks in your contacts database. During the presentation, Nokia has also indicated that the app will be pushed onto the upcoming Intel and Nokia platform, Meego. However, the transition from Symbian to Meego for the Communicator Mobile app hasn't been put into stone, and from Nokia's estimate, the app will be ready for the new Meego OS by 2011.

As of now, Communicator Mobile has been announced to be available for the Nokia E72 and Nokia E52. Forward-looking, this app will be available on its future E-series device, including the upcoming Nokia E5. 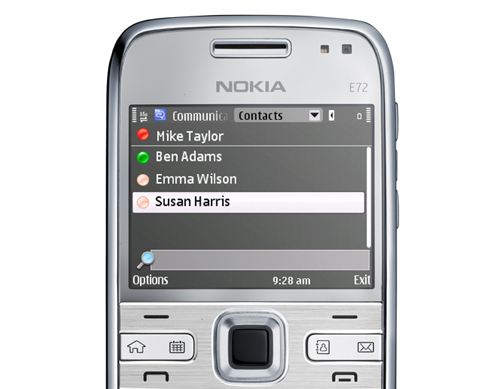