Note: This article was first published on 23rd February 2016.

The design heritage of the new Sony Xperia X series phones is as clear as day. Drawing cues from the Xperia Z5 phones, the Xperia XA, X and X Performance all feature the same blocky, utilitarian design, except it has smoothed out the more angular edges on the former.

But instead of wowing us with an extra-large or high-resolution display, Sony has chosen to focus on more functional aspects of the phone (also arguably the things that matter the most) – the camera, battery, and design. In fact, Sony’s focus on design is particularly welcome because all three Xperia X phones feature an all-metal body, even the Xperia XA, which is the entry-level phone in the series. Sony also highlighted its curved glass edges, which help create a more natural and seamless feel. 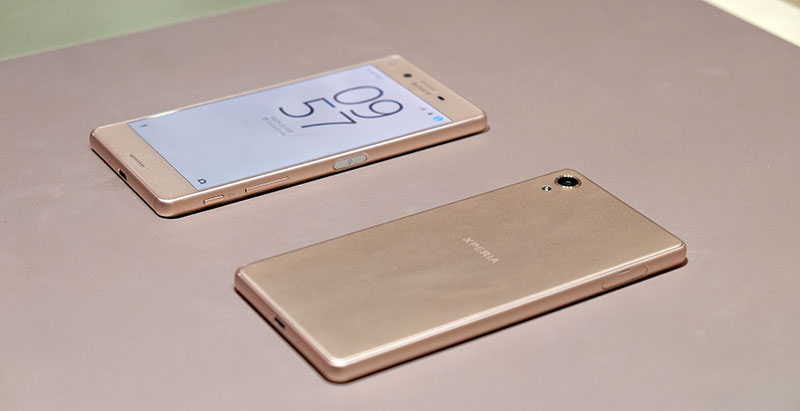 If we were to tease out an underlying theme from the barrage of features thrown at us, that would be usability. Above all, we got the sense that these phones aren’t intended to dazzle or impress. Instead, they’re meant to be functional, reliable, and a joy to use.

For starters, all three feature a 5-inch displays, which means that we had no trouble with one-handed use – something that is fast becoming a rarity among the burgeoning legions of phablets out there. In our hands, all three were pleasantly lightweight, but still managed to feel reassuringly well put together. The display resolutions were similarly modest – the Xperia X and X Performance have 1080p screens, while the XA has a 720p display. Neither of these are as crisp or impressive as the 1440p screens on phones these days, but as we said earlier, they're definitely functional.

However, one thing to note about the Xperia XA is that the horizontal bezels are even thinner than that on the Xperia X and X Performance. It is also noticeably smaller than its two bigger brothers, which might make it a good choice for those looking for a compact, mid-range phone. 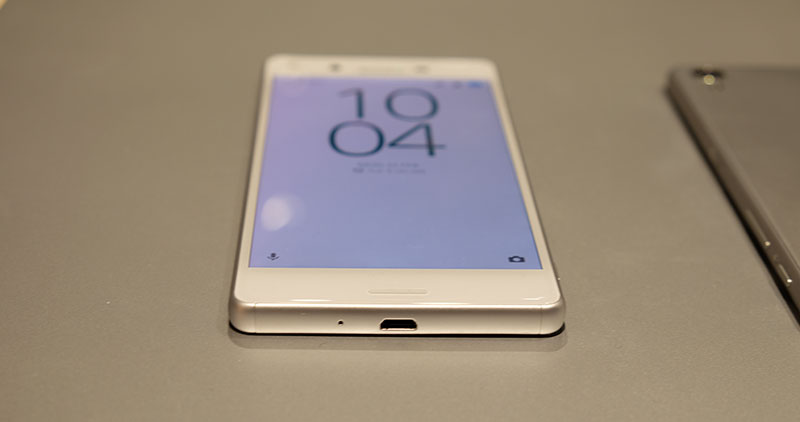 There are also no USB Type-C ports on these phones, and they feature the standard micro-USB port on the bottom. After all, USB Type-C still hasn’t quite percolated into the mainstream yet, and micro-USB cables are still the easiest to procure.

On the rear, the Xperia X phones also look much like the Z5. The smooth metal back is interrupted by only the Xperia logo and the rear camera and flash. Both are tucked discreetly away in the top left corner and sit almost flush with the surface. 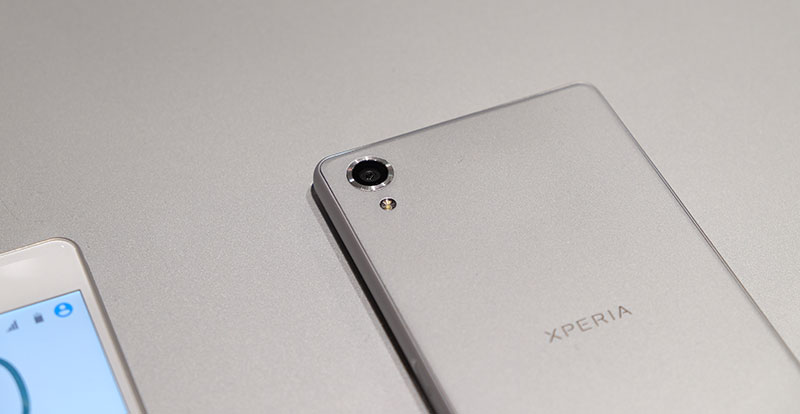 Sony is actually holding up the camera as one of the Xperia X’s strongest selling points. Developed in close collaboration with the same engineers who worked on Sony’s Alpha cameras, both the Xperia X and X Performance feature something called Predictive Hybrid Autofocus.

In a nutshell, what it does is automatically predict and track the movement of fast-moving objects so that they are always kept in focus. Sony demonstrated the camera’s capabilities with rolling balls in a maze. There were still a couple of hitches when it came to locking onto the ball, but once the autofocus had acquired its target, it was able to follow the ball’s trajectory fairly reliably. The camera software also comes with a manual mode, which allows you to change things like the white balance and exposure, and also select from various scenes and flash modes. 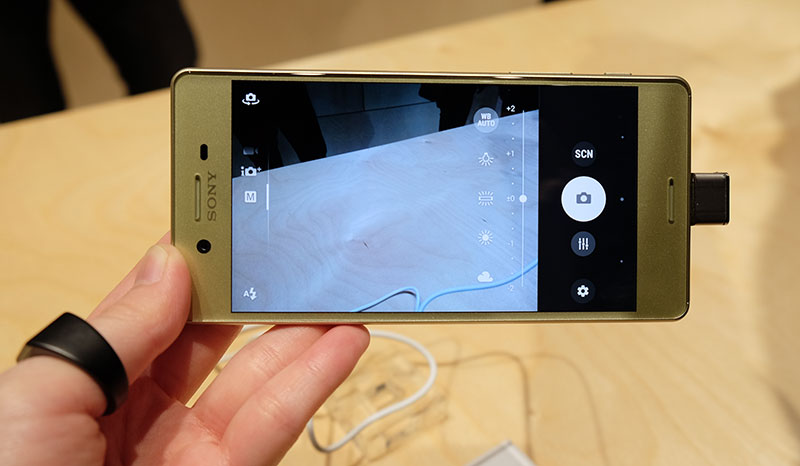 The sensor in question on the Xperia X and X Performance is a 1/2.3-inch 23-megapixel Exmor RS for the rear camera, and a 1/3-inch 13-megapixel Exmor RS on the front. The front camera can reportedly handle selfies in poor lighting conditions, but we didn’t get a chance to put that to the test. Unfortunately, the lower-end Xperia XA doesn’t feature any of that nifty autofocusing technology and utilizes a more modest 13-megapixel rear camera and 8-megapixel front camera. 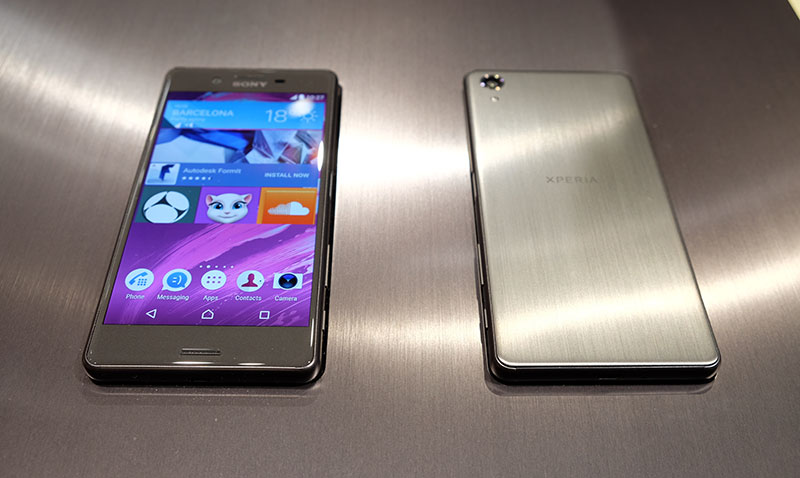 That aside, the power button (which doubles as a fingerprint sensor like on the Xperia Z5), volume rocker, and dedicated camera shutter button are located on the right edge of the phone. There’s also a built-in camera shortcut, and holding down the shutter button loads up the camera quite quickly. It’s not the snappiest we’ve seen, but it’s nothing to complain about. The SIM card and microSD tray is located on the other side of the phone. 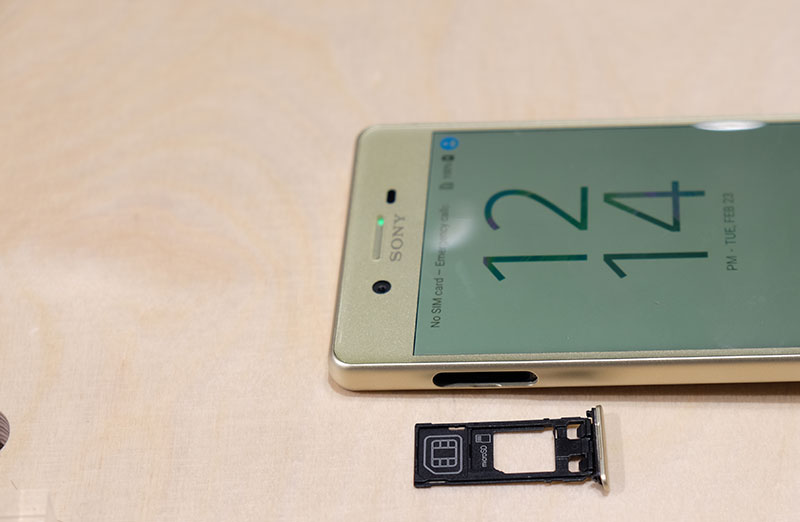 The layout on the Xperia XA is slightly different. It is lacking a fingerprint sensor on the power button, which has instead reverted to Sony’s old round silver button. The volume button is also located slightly higher up, but it retains the dedicated camera button on the X and X Performance. The left edge houses slots for the SIM and microSD cards, hidden behind a pull-out tab. All three Xperia X phones will support up to 200GB of expandable storage, and we can hardly see anyone needing more than that. Finally, there is what looks like an additional slot for a second SIM card at the bottom. 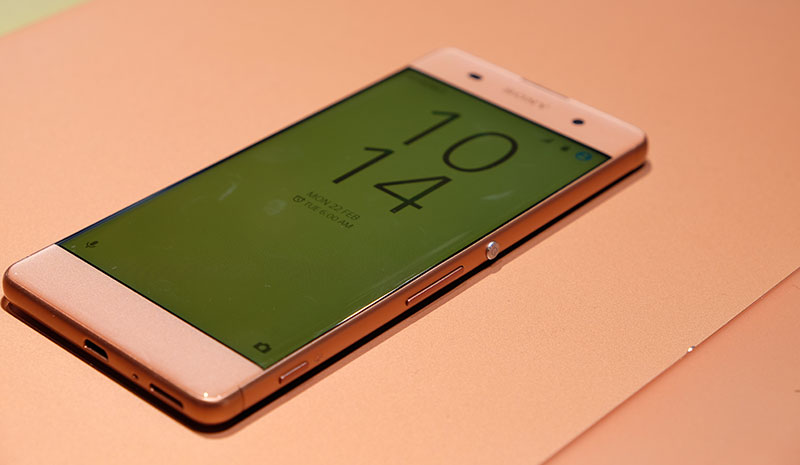 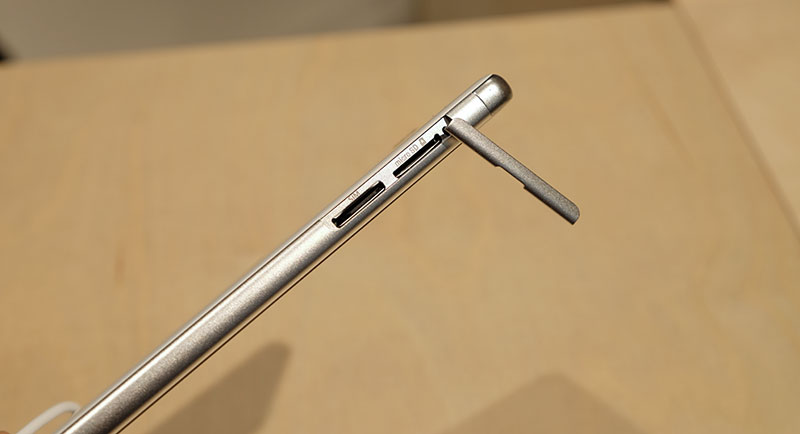 When it comes to specifications, the Xperia X Performance boasts Qualcomm’s latest flagship, the quad-core Snapdragon 820, along with 3GB of RAM, so you can be assured of getting some top-notch performance out of the phone. Moving down the line, the Xperia X uses a mid-range Snapdragon 650 and 3GB of RAM as well.

For better or worse, the Xperia XA is something of an outlier with a MediaTek MT6755 processor and 2GB of RAM. That MediaTek chip is also known as the Helio P10, and it’s actually an octa-core model comprising eight Cortex-A53 cores that can go up to 2.0GHz.

Other features of the phones include a new battery technology on the Xperia X and X Performance that can reportedly double the lifespan of the battery (Sony's benchmark in arriving at this figure was the Xperia Z2). Sony has partnered with Qnovo, a Californian company that works on adaptive charging technology, to implement the technology alongside its own smart battery management feature. According to Sony, not only will the overall lifespan of the battery be doubled, it will also last longer on a single charge. On Qnovo's end, it says that it measures battery health in real-time and adjusts the battery current on-the-fly to suit the battery status in order to achieve the best possible outcome. But again, this is one of those things that we won't be able to verify until we have a unit in for review.

All three phones are available in white, graphite black, lime gold, and rose gold, together with four different types of cases. Sony didn’t release any price information yet, but it did say that we can expect the phones this summer.