LG added two new members to its G premium series of mobile devices - the G Pro 2 and G2 Mini. The Korean company announced the successor to the Optimus G Pro on 13 February while the G2 Mini was unveiled days before Mobile World Congress 2014.

The G Pro series has always been LG's answer to Samsung's Galaxy Note phablets, and the G Pro 2 is no different; it takes the fight to the Samsung Galaxy Note 3 this time with a bigger display, 4K video recording and a new design. 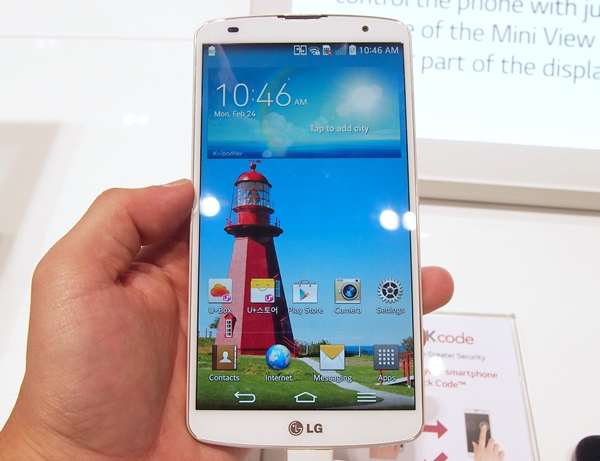 Compared to its predecessor, the G Pro 2 has a bigger display at 5.9-inch. This is an increase of 0.4-inch and puts the G Pro 2 directly in the league of the HTC One Max. As the display resolution remains the same at 1,920 x 1,080 pixels, the pixel density drops from over 400ppi to 373ppi. Nonetheless, the 5.9-inch IPS display still looks great.

Like the G2, the G Pro 2 comes with very slim bezels. It boasts extra slim bezel of 3.3mm, which is 0.65mm thicker than the G2. Besides making the display look edge-to-edge, the slim bezel keeps the form factor of the G Pro 2 manageable in the hands. It is only slightly larger than its predecessor, and is less chunky compared to the One Max. 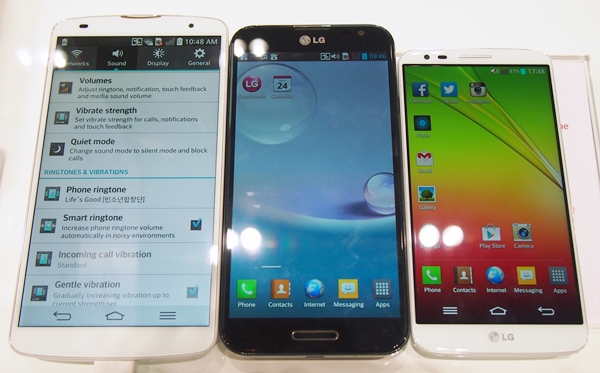 One of our complaints about the Optimus G Pro is its slippery rear cover. LG addressed this issue in the G Pro 2 by using a dimpled, textured rear that provides some grip in the hands. This direction is somewhat similar to what Samsung is doing for its recent Galaxy mobile devices, where the plastic rear of the Galaxy Note 3 and Galaxy Note tablets are replaced with a leather-like material for better feel and look. 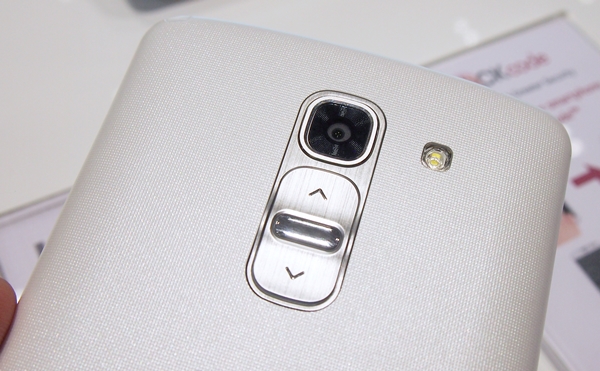 As you can see from the photo above, the G Pro 2 is the third G-branded device to come with the rear-button setup. This setup was first introduced on the G2 and we are glad to see it appear on the G Pro 2 as it makes handling the device much easier compared to other phablets.

LG developed a new software feature, Mini view which allows you to shrink the normal window into different sizes according to your needs. two smaller sizes - 3.4-inch and 4.7-inch - for easier one-handed operation. This may help some users use the device more comfortably in one hand. All you need to do is to swipe right at the bottom of the screen to resize the screen. Once again, this is similar to what Samsung has implemented on the Galaxy Note 3.

Another key feature of the G Pro 2 is the addition of optical image stabilization plus (OIS+) to the 13-megapixel rear camera. OIS+ adds software anti-shake functionality to the hardware-based feature in the camera module for better, clearer photos when in motion or under low light conditions. In this aspect, LG one-ups Samsung as the Galaxy Note 3 only comes with digital image stabilization. The G Pro 2 also matches the Galaxy Note 3 in video recording capabilities as it is able to record 4K videos. 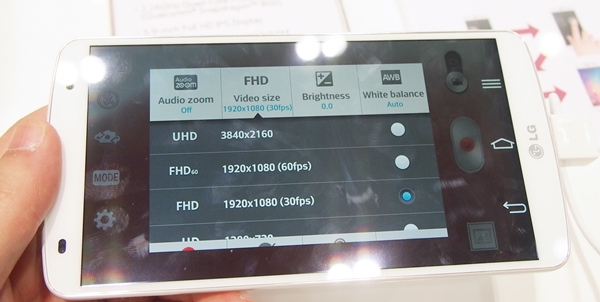 Below is a video showing how the OIS+ of the G Pro 2 fared against the Samsung Galaxy Note 3 (right) and the Apple iPhone 5S (left).

The G Pro 2 also comes with Magic Focus, an imaging feature that allows you to select the preferred depth of focus before saving the photo.

The G Pro 2 is powered by a Qualcomm Snapdragon 800 quad-core 2.26GHz processor, 3GB RAM and Android 4.4KitKat. It comes in 16GB and 32GB model, both of which have microSD card slots that support cards up to 64GB.

Like many of its competitors, LG has a mini variant of its flagship G2 smartphone. However, the G2 Mini is the biggest of all the mini flagship devices in the market. It comes with a 4.7-inch display while the other devices, ASUS PadFone Mini, HTC One Mini, Samsung Galaxy S4 Mini and Sony Xperia Compact all come with displays of at least 4.3-inch and below. 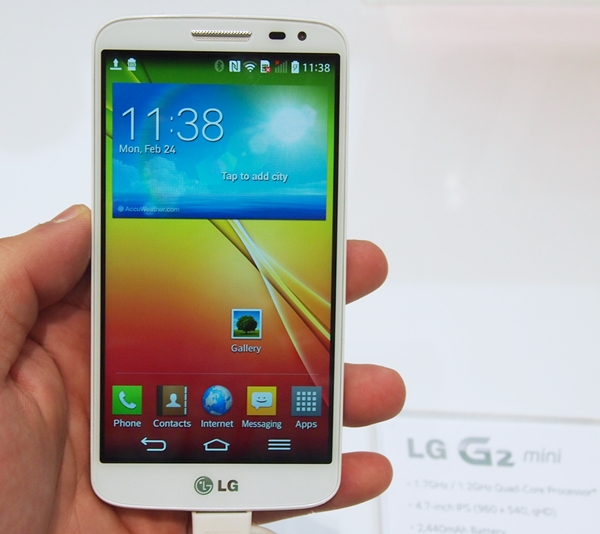 We find it strange that LG did not equip the G2 Mini with a higher resolution display; the 4.7-inch display of the G2 Mini comes with a resolution of 960 x 540 pixels. At its screen size, the pixel density is significantly lower than the competition.

Sony has proven that it is possible to have a higher resolution display in a smaller form factor with its Xperia Compact, although consumers may have to pay more for it. Perhaps LG is trying to make the G2 Mini as affordable as possible to its targeted mid-tier market segment. 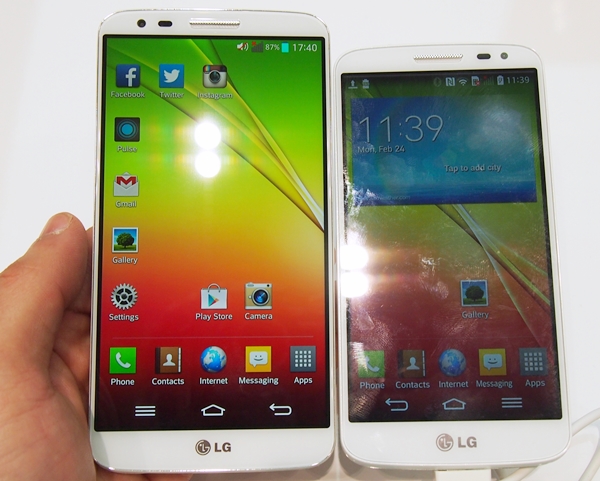 The G2 Mini has the same rear-button setup as the G2 although we think that it is not necessary since the G2 Mini is easier to handle than the larger G2, G Flex and G Pro 2. 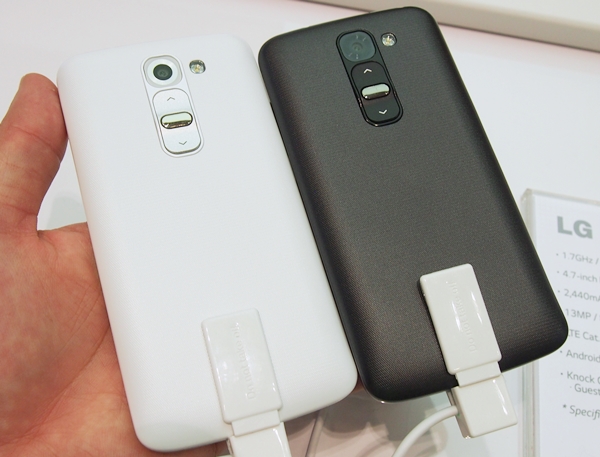 Other specs of the G2 Mini include 1GB RAM, 8GB internal storage, a microSD card slot, a removable 2,440mAh battery and Android 4.4 KitKat. The G2 Mini is powered by either a Qualcomm Snapdragon 400 quad-core 1.2GHz processor or NVIDIA Tegra 4i quad-core 1.7GHz processor. Both models support 4G LTE connectivity. The Tegra 4i model will also come with a 13-megapixel rear camera while the Snapdragon model only has an 8-megapixel rear camera. 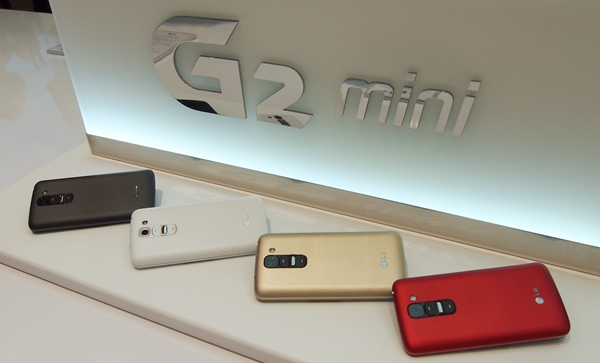