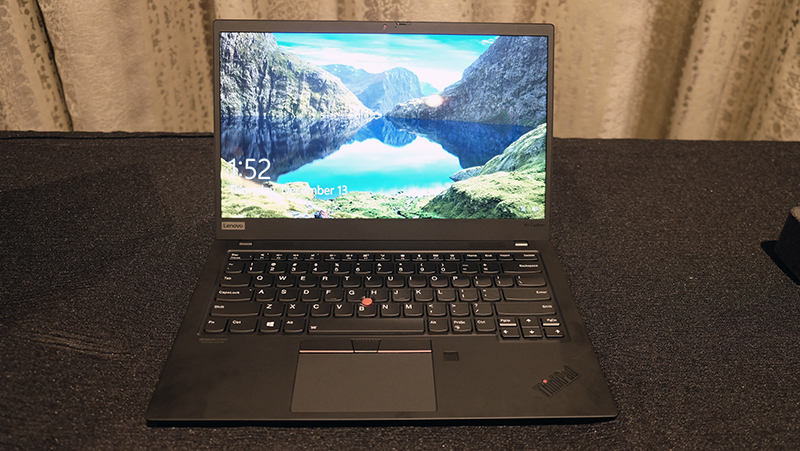 Elsewhere, security features have been beefed-up, and the speakers and microphones have been improved as well.

Here's a closer look at the latest machines.

Lenovo's ThinkPad X1 Carbon has long been considered one of the best business notebooks you can buy, so the company is simply iterating on a winning formula. This year, the 7th-generation X1 Carbon sheds some pounds and girth, resulting in a notebook that feels freakishly light.

This is a notebook that looks pretty durable and hefty, so I'm always surprised by how light it is when I pick it up. It weighs a mere 1.08kg, so you'll hardly notice it's there when you tote it around. It's also really slim, measuring just 14.95mm at its thickest point (just a hair thinner than the 15.95mm on the previous generation).

Visually, some changes have been made as well, and this year's ThinkPad X1 devices were redesigned with a focus on materials and looks.

While part of the ThinkPad X1 Carbon's claim to fame has always been its use of light and tough carbon fiber, the laptops always looked like they were made from just plastic. This time, Lenovo decided to make its carbon fiber-reinforced construction known by splashing a carbon fiber weave pattern across the entire lid. 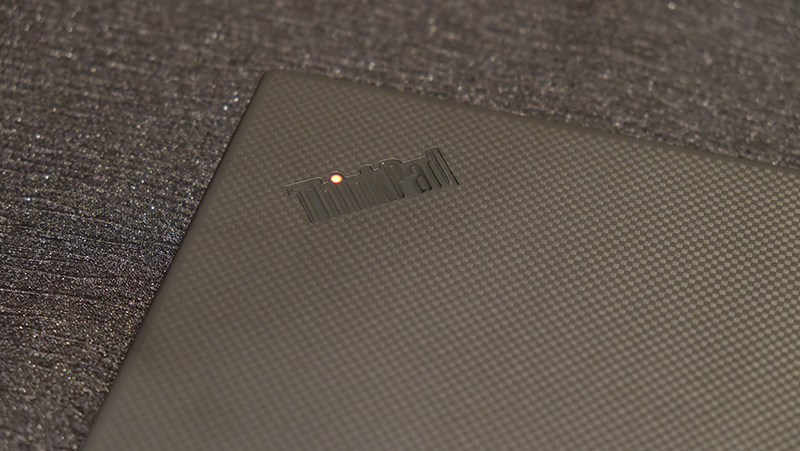 It's a nice touch, and it manages to retain the classy, business-like feel of its predecessors while adding a bit more character to the design.

That aside, the ThinkPad X1 Carbon is powered by the latest Intel hardware, and it'll come equipped with an 8th-generation Core i7 Whiskey Lake chip, up to 16GB of RAM, and a 2TB PCIe SSD.

The 14-inch display is gorgeous as always, and it can be equipped with up to a 4K IPS panel with a 500-nit peak brightness and 10-bit color depth. This option also adheres to the DisplayHDR 400 specification, but don't expect the same black levels and color gamut as an OLED panel.

Still, the X1 Carbon does focus quite a lot on providing a good multimedia experience. The audio system has been upgraded, and it now features four Dolby Atmos speakers comprising two top-firing tweeters and two down-firing woofers for a more realistic and immersive audio experience. On top of that, it features four far-field 360-degree microphones (up from two from before) that should improve the experience of voice conferences. Amazon Alexa is supported as well, so you can easily talk to your digital assistant from across the room.

Lenovo says a lot of thought went into the microphone placement, and it payed attention to the smallest details, such as the size and depth of the apertures.

At first glance, all these features may appear surprising on a business notebook, but Lenovo says it's realized that professionals do consume entertainment on their laptops during their downtime as well, so it wanted to provide for that.

The keyboard is backlit by white LEDs and is quite excellent as well. In fact, it's quite a pleasure to use alongside the Precision Touchpad. Key travel distance is further than expected for a laptop of this size, and it really goes a long way toward improving your overall typing experience. 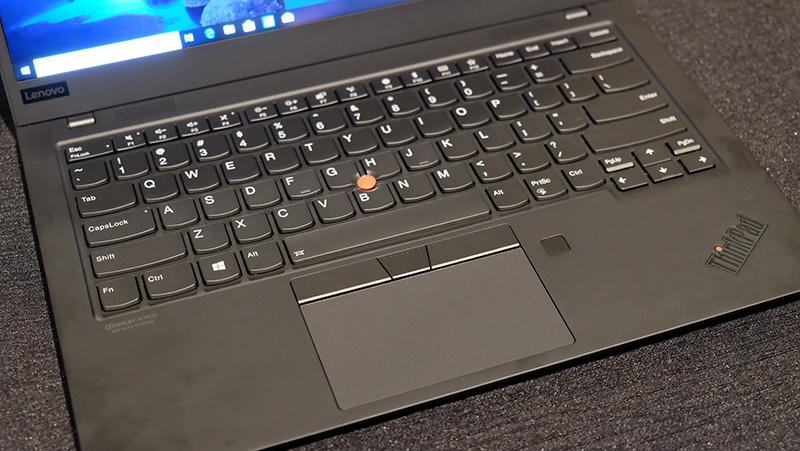 When it comes to connectivity options, there's a wide selection of ports and connectors. You'll find two USB 3.1 (Gen 1) Type-C, two Thunderbolt 3, and one HDMI 1.4 output, although the dedicated Ethernet port on the previous-generation model has since been removed. Furthermore, on the left is what looks like two USB-C ports combined to form a proprietary connector. This lets the notebook link up with Lenovo's docking solutions, including the ThinkPad Mechanical Dock. This feature was first introduced on last year's ThinkPads, and it features a clever self-leveling mechanism that supports multiple system sizes at different docking angles.

However, one glaring omission is the microSD card reader from the previous generation. Considering that ThinkPad customers have been clamoring for a full-sized card reader for a while now, it's surprising that Lenovo would choose to ditch this option altogether. 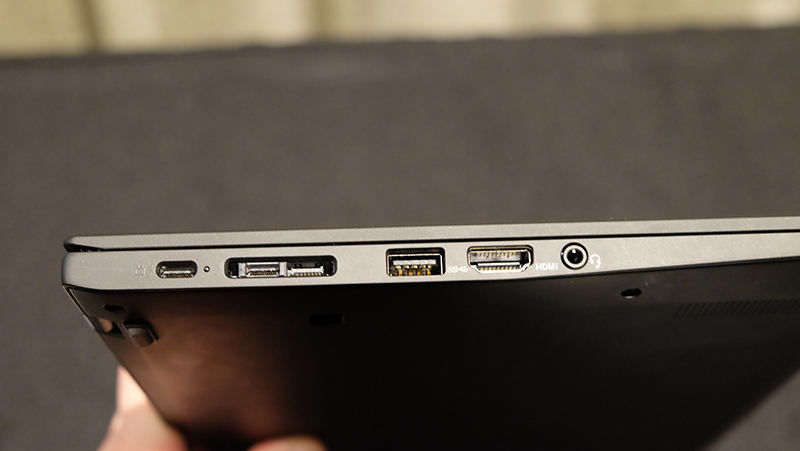 That aside, LTE Cat16 is available as well, so you can continue to work while on the move.

The battery has also shrunk from 57Wh to 51Wh, but Lenovo is still claiming up to 15 hours of battery life, perhaps thanks to the more efficient Whiskey Lake chips. Furthermore, Lenovo's RapidCharge technology can supposedly charge the battery from zero to 80 per cent in just 60 minutes, so you can get up and going in no time.

And as on any ThinkPad device, security remains a central tenet of the laptop's design. For starters, Lenovo says it offers up to eight different methods of device authentication, including your IP address, GPS location, NFC, match on chip fingerprint reader, facial recognition, Bluetooth, passwords and PINs, and smart cards.

In addition, the X1 Carbon features Lenovo's ThinkShield suite of security solutions, comprising a dTPM 2.0 chip, ThinkPad PrivacyAlert, and ThinkPad PrivacyGuard. The latter two are intended to protect a user from prying eyes, where the ThinkPad Privacy Alert software can warn users if anyone is looking at their screen, at which point it'll turn on PrivacyGuard. It relies on the IR camera to work, and PrivacyGuard can sort of dim the display and redirect light, thus preventing snooping eyes from reading what's on your screen from an angle. 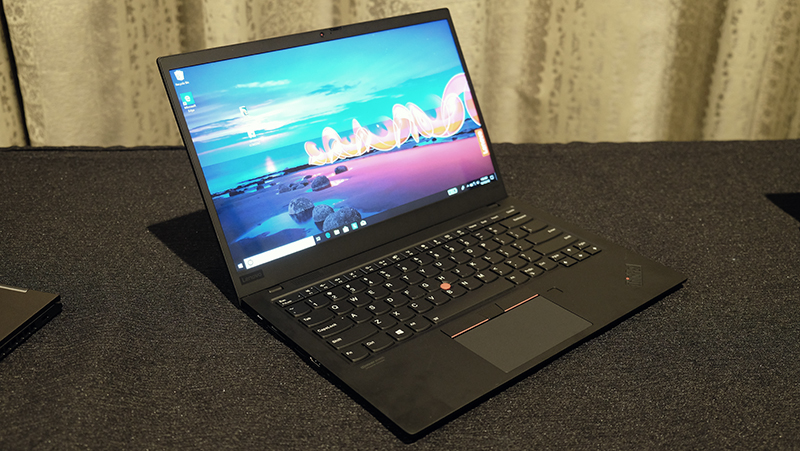 On top of that, the ThinkShutter camera cover will now be available for both the standard HD webcam and the IR variant.

The ThinkPad X1 Carbon will be available in June at a starting price of US$1,709.