Hands-on with the Lenovo Yoga Book: Look Ma, no keyboard! 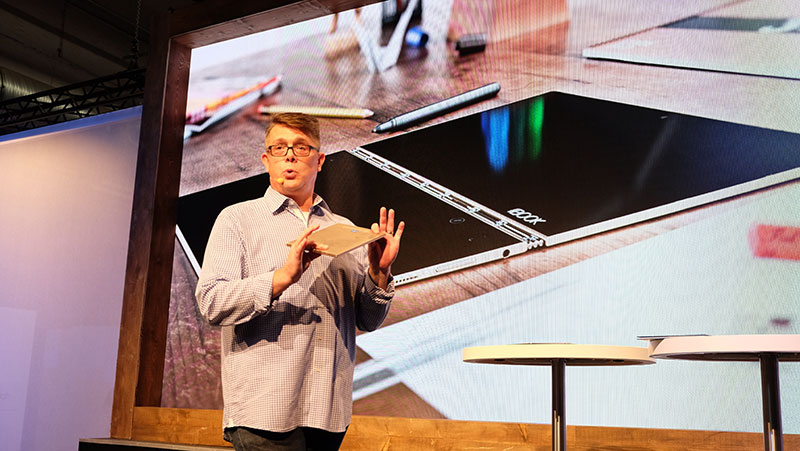 Updated on 16 November 2016: The Yoga Book running Android will be available starting this month in gunmetal grey and champagne gold, with prices starting at S$849. The Windows version will come later in December in carbon black, and will start at S$849 as well.

Tablets are boring, according to Lenovo. The category has been stagnant in recent years and sorely lacking in new features or innovative tweaks to entice consumers to get on board or even upgrade. Even after years of iterating, the tablets are really still oversized phones of sorts, even if some of them are now so powerful that you can – wait for it – use them as a PC.

Over the years, we’ve been inundated by overblown claims of the newest bauble on the street, all supposedly revolutionizing the way things are done. But after all that, this might be the first time that there’s actually substance to back up all that marketing fluff. 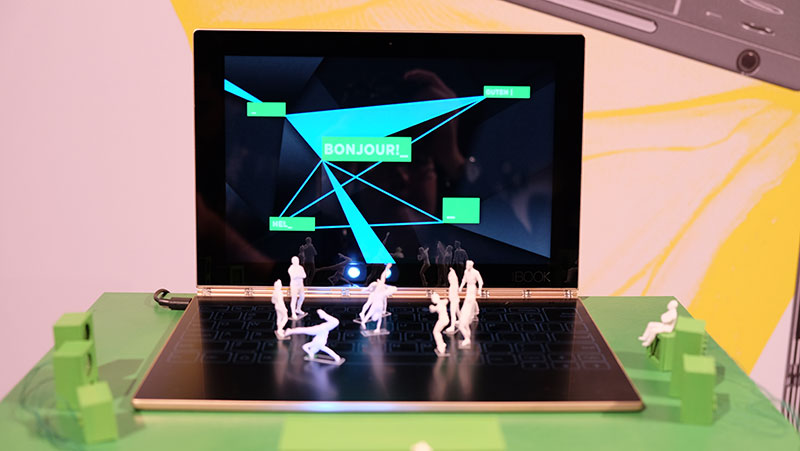 Enter the Lenovo Yoga Book, a bold attempt at redefining – or quite literally rewriting – what a tablet PC should be able to do. This is the result of three years of development and iterating, and when we saw the Yoga Book, it’s really not hard to see why it took so long. 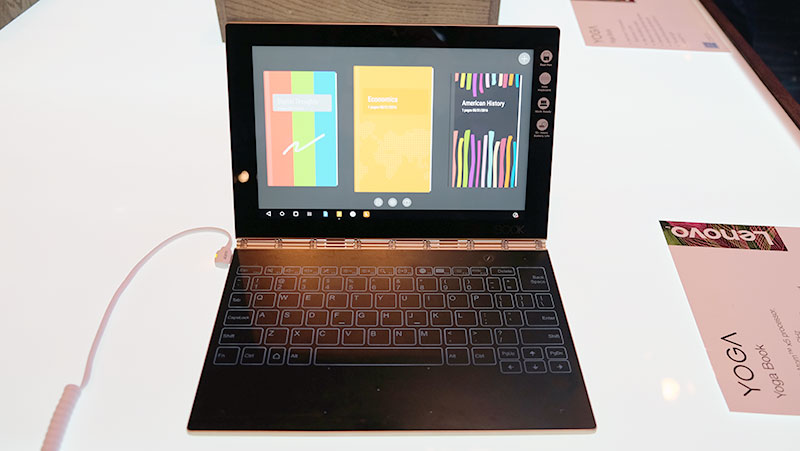 At first blush, you can already tell that there’s something different about this 10.1-inch machine. A blissfully blank slate is where the physical keyboard should be, but press the pen icon, and the on-demand, “Halo” keyboard pops up.

In a time when nearly everyone is trumpeting increased key travel distance as the hallmark of a positive typing experience, it may almost appear like Lenovo is taking a step backwards. Whether or not that is the case is probably a matter of personal preference, and one that will be subject to intense debate, but the technology behind the Halo keyboard is still something to be appreciated in its own right.

Each key produces haptic feedback when “pressed”, not unlike what you can set your smartphone keyboard to do, but the touch-based keyboard actually forces more changes in how you type than may be immediately apparent. For instance, while most of us are probably used to resting our fingers in a fixed position on a regular keyboard, the Halo keyboard encourages a nimbler way of typing because resting your fingers on the keyboard actually ends up activating the keys in question. 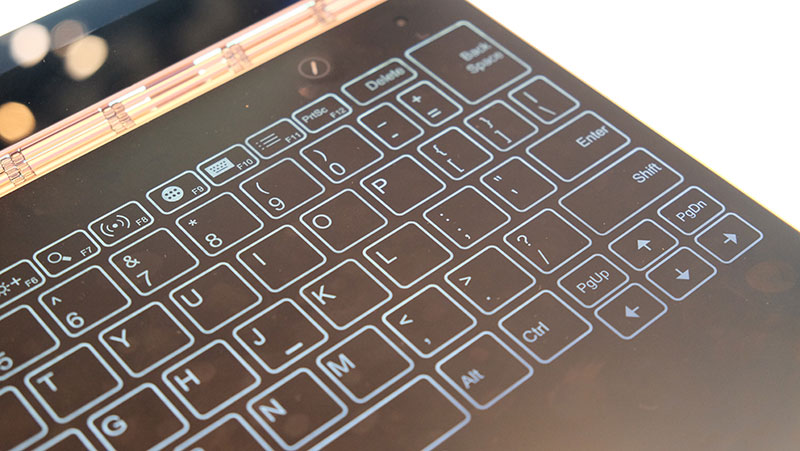 More importantly, Lenovo says the keyboard is able to learn and adapt to how you type over time and adjust the virtual active area around each key. This means that you can be less precise with your typing and still activate the key you want even if you only hit the surrounding area.

As you can imagine, this is especially important because the lack of physical keys makes it difficult to touch type, and it’s a tall order to expect users to consistently land their key strokes within the precise perimeters of each key.

That sounds nice in theory, but we’re not exactly sure that the experience is for everyone. The keyboard produced mixed results in our short time with it. For one, the typing accuracy was impressive for a touch-based keyboard, but there is a learning curve to climb and we ended up stumbling over the keys more than once. Still, it’s probably unfair to fault the keyboard before giving ourselves a longer time to adapt, and we can reasonably see users becoming quite proficient with it.

Lenovo likens the Halo keyboard to consumers giving up their Blackberries for screen-based keyboards, but while that is a fair comparison, we’d also argue that PC keyboards are far more entrenched than Blackberries ever were. Furthermore, people generally spend a lot more time typing on their PCs than they do on a smartphone, and might be rather more resistant to change. 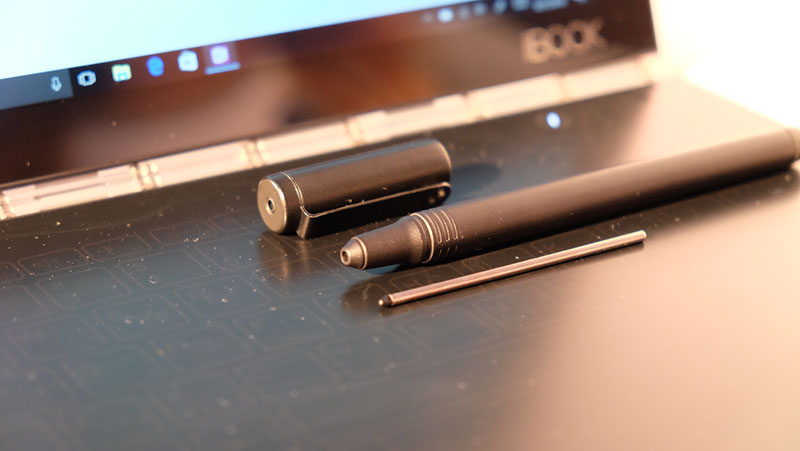 That said, a novel approach to typing isn’t all that Lenovo is bringing to the table, and the typing area doubles as a notepad as well. The bundled real-pen, as Lenovo calls it, uses passive electromagnetic resonance (EMR) technology and features up to 2,048 levels of pressure sensitivity. It uses Wacom’s Feel technology, and can also detect variations in writing angle, making it suitable for drawing as well. 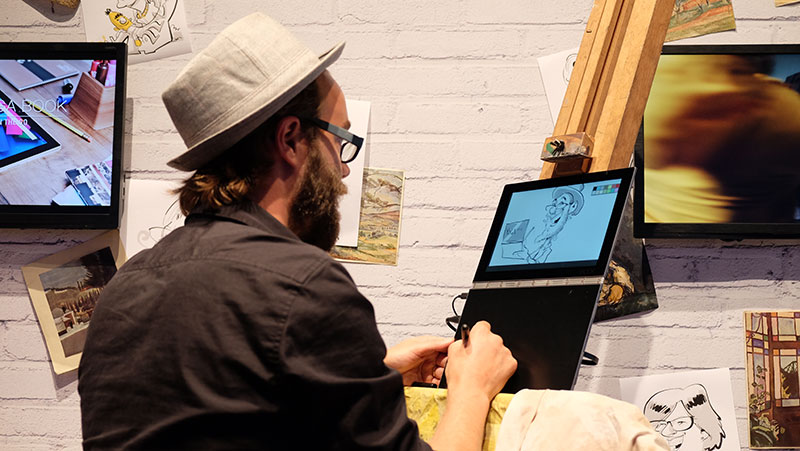 The pen was quite a pleasure to write with, and felt extremely smooth and responsive. That’s not even the most impressive part yet, and Lenovo actually dubbed it real-pen because it comes with a separate nib that writes in real ink. The pen has hover detection capabilities of up to 10mm, so you can place a notepad (as long as it’s less than 10mm thick) on the typing area, write in ink using the stylus, and have it automatically digitized and saved on the Yoga Book. Pretty neat, right?

We managed to try this out for ourselves, and suffice to say, it felt equally natural and responsive as writing directly onto the touchpad itself. 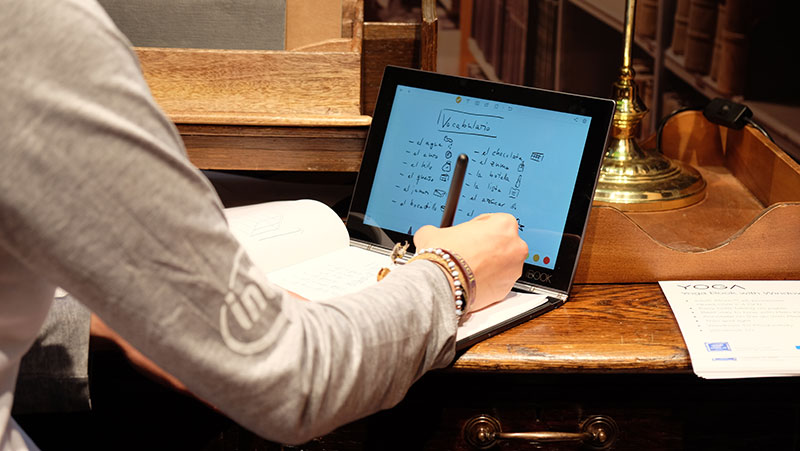 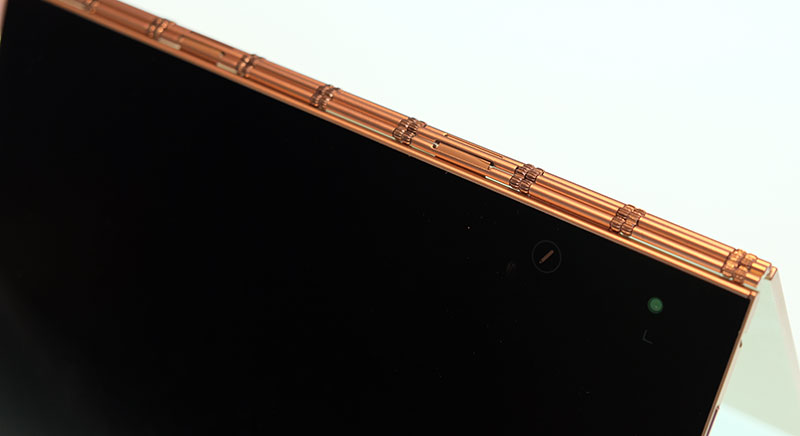 The Yoga Book’s construction is another highlight of the device. This is an extremely thin convertible, measuring just 4.05mm at its slimmest (or 9.6mm at its widest). In addition, it weighs just 690g, thanks to its lightweight aluminum and magnesium chassis. 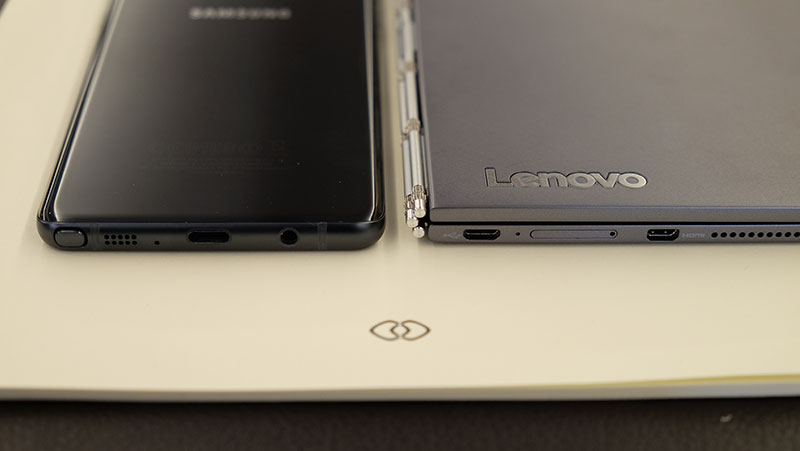 The watchband hinge also contributes wonderfully to the overall feel of the device. The intricate mechanism comprises of a total of 130 individual pieces, and quite successfully strikes a balance between flexibility and rigidity.

But as we mentioned earlier, don’t be expecting premium hardware in a design this compact. It is powered by a modest Intel Atom x5-Z8550 SoC (1.44GHz, 2MB cache), 4GB of LPDDR3 RAM, and 64GB of flash storage. There’s no ultra-high resolution display either, and the Yoga Book features a modest 1,920 x 1,200-pixel IPS panel.

There aren’t many ports available either, with just a microUSB port for charging on the left and a mini HDMI port. On the other side, you’ll find things like the power button, volume rocker, and 3.5mm headphone jack.

The Yoga Book ships with either Windows 10 or Android 6.0.1 Marshmallow. Both Windows and Android models will start at S$849 locally. The Android version (gunmetal grey and champagne gold) will be available first starting this month, while the Yoga Book with Windows (carbon black) will arrive later in December.