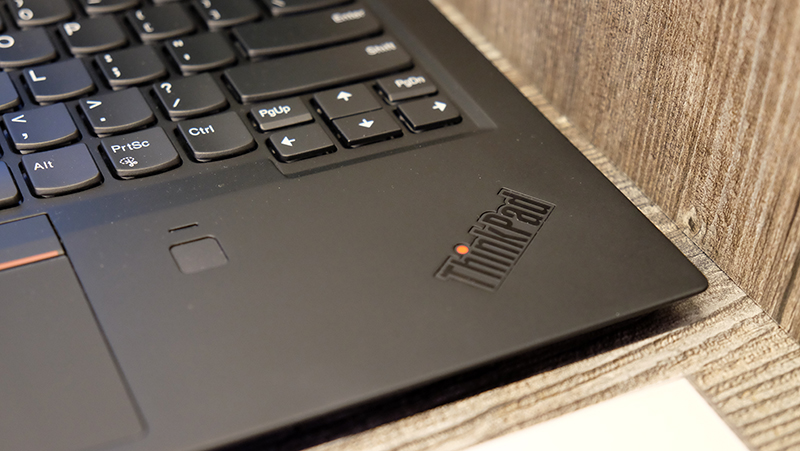 Updated on 8 March 2018: Added details on local price and availability.

Lenovo just took the wraps off its ThinkPad X1 devices at CES 2018, and my first impression was of new notebooks that came with several quality-of-life upgrades and a couple of big changes, while still managing to stick to a much-loved design ethos.

In addition to the faster Intel 8th-generation processors, they also now feature microSIM card slots and eSIM technology, so you’ll be able to stay connected all the time.

I’ve since managed to spend more time with the devices, and here’s a bit more detail on the new ThinkPad X1 Carbon, X1 Yoga, and the revamped X1 Tablet.

The new X1 Carbon looks very similar to its predecessor, but there’s just one big difference – it now has a display that supports Dolby Vision HDR technology. This is a first for a laptop, and together with the X1 Yoga, it is the only laptop you can buy now that has this feature. 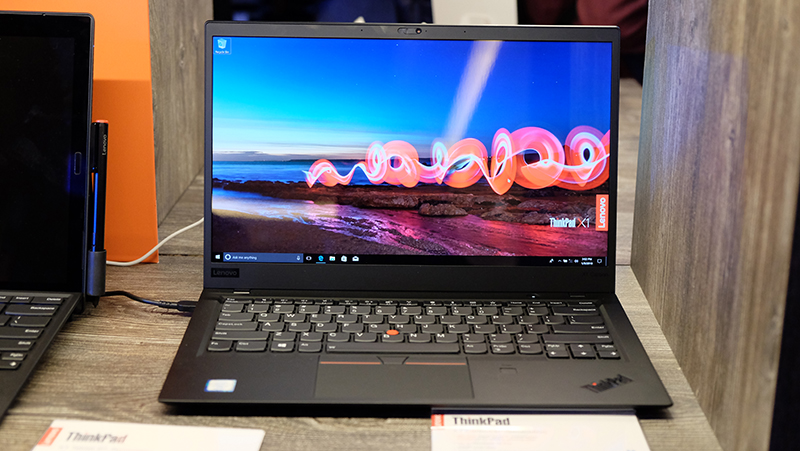 I’ll be talking more about the X1 Carbon’s screen here, but my impressions apply to the X1 Yoga as well. In short, the screen is gorgeous. It’s something that needs to be seen in person, because pictures don’t quite do justice do it.

With deep blacks, rich colors, and a wider color range, the 14-inch IPS display is a huge step up from any laptop. This comes across in the smallest things. For instance, when set beside an X1 Tablet with a non-HDR display, the blues in the water on the X1 Carbon had noticeably gentler and more subtle gradients.

It also offers 100 per cent coverage of the AdobeRGB color space, so it’s a great option for professionals who work with photos and videos.

You’re probably surprised that this was achieved without an OLED display, especially considering that that was offered on the X1 Yoga (Gen 2). But while the current screen may not be as eye-popping as a true OLED display, Lenovo says it’s learnt from experience that OLED displays aren’t actually the best for laptops, partly because of higher power consumption. 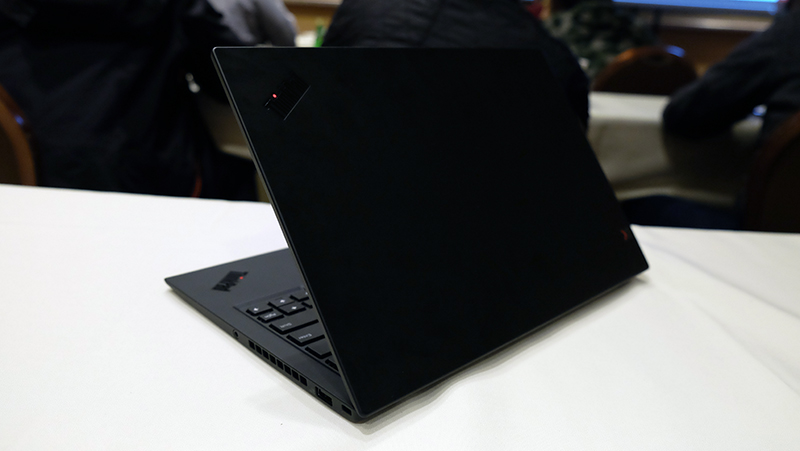 The LTPS (Low Temperature PolySilicon) display Lenovo uses has a peak brightness of 500 nits, significantly brighter than most notebook screens. It also achieved this without requiring trade-offs in terms of battery life, slimness, or bezel size, which is pretty impressive.

The HDR model features a crisp 2,560 x 1,440-pixel resolution, but there’s also a lower resolution FHD option available without HDR. You can configure the laptop to have a touchscreen as well, unless you want to spring for the HDR version which doesn't support touch.

The laptop feels blissfully light at 1.13kg, and while it isn’t quite at the bleeding-edge of thin designs at 15.95mm thick, I found little to complain about. Design-wise, the 2018 model also sports a new soft-feel matte cover that feels quite a bit better than before.

One thing I really like is the use of one of the two Thunderbolt 3 ports for charging. Lenovo now uses a USB-C charging port for all its 2018 ThinkPads, and I can’t see anyone missing the proprietary charging port. 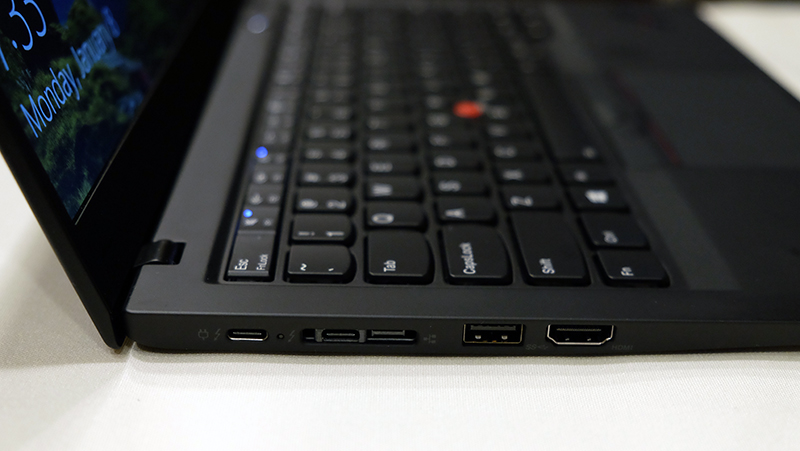 You’ll also find two other USB 3.0 ports, a headphone and microphone combo jack, one full-sized HDMI port, and a 4-in-1 microSD card reader at the back. The lack of an SD card slot is a pretty glaring omission on a notebook that lends itself so well to photo and video editing, and it’s really a pity that Lenovo didn’t include one. 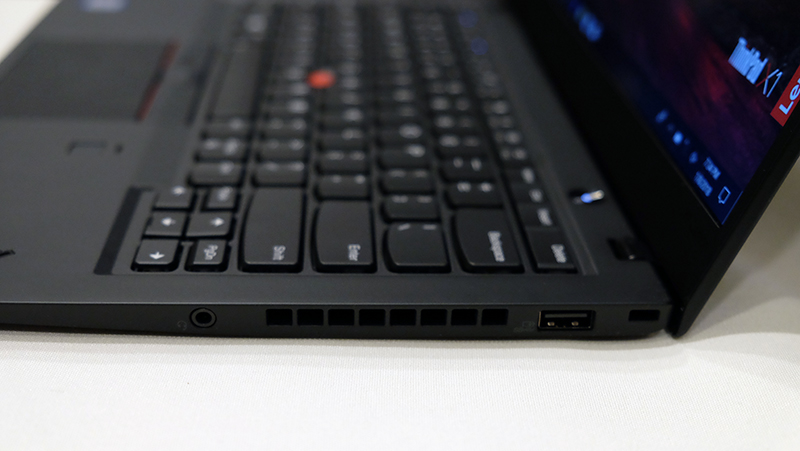 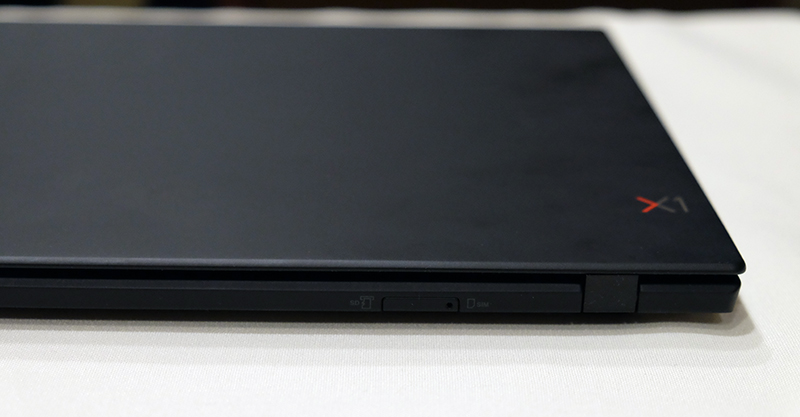 Another nifty feature is the new docking connector, which features a clever self-leveling mechanism that supports multiple system sizes at different docking angles. This enables a single docking interface across multiple products, and supposedly lets Lenovo create even thinner systems.

2018’s ThinkPad X1 Carbon comes with dual 360-degree far-field microphones as well, so it can pick up your voice from up to 4m away. If you don’t like Cortana, Lenovo will offer the Amazon Alexa app for PCs by the end of January, so you can talk to Alexa instead. 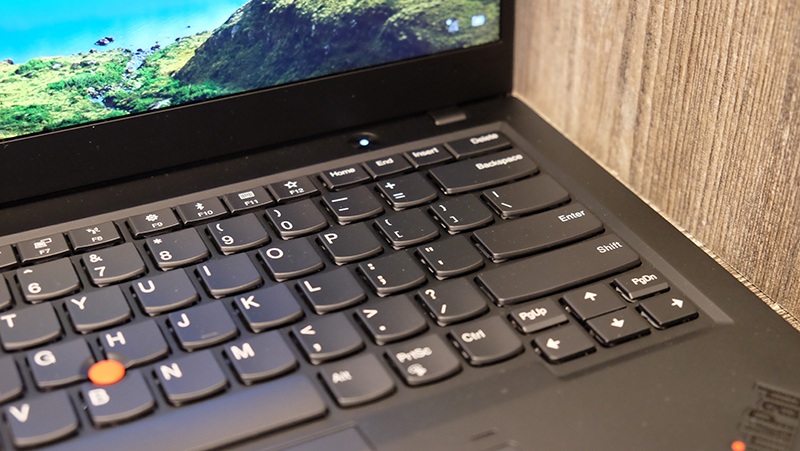 In addition, RapidCharge has been brought to the X1 family, which allows you to get to 80 per cent charge in 60 minutes using the 65W AC adapter. Lenovo is also claiming up to 15 hours of battery life on its 57Wh battery, but I’ll have to test this out for myself.