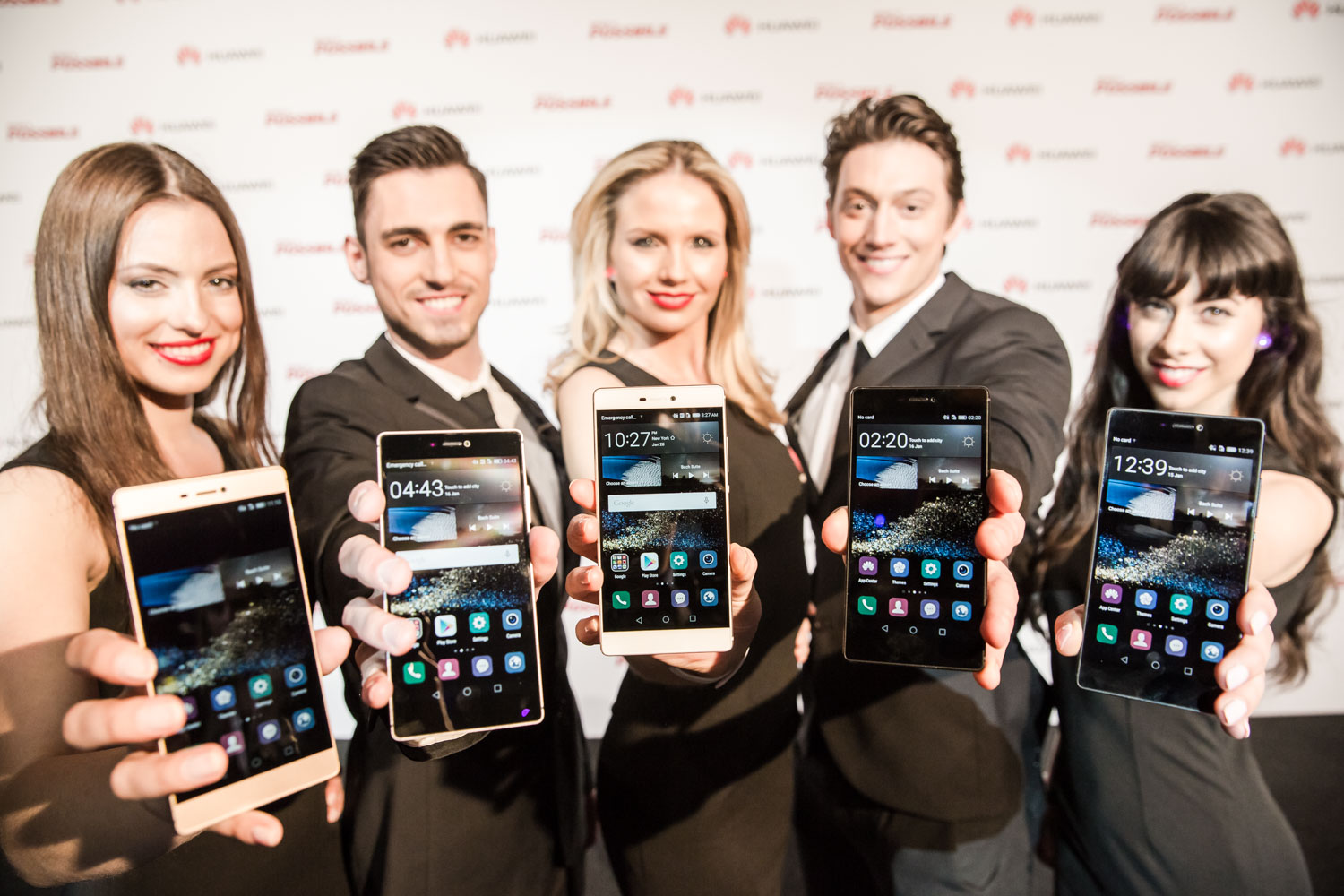 Huawei's new flagship device is here. The 5.2-inch P8 boasts an ultra-thin, full metal design, octa-core processor, dual-sim capabilities and Huawei has loaded it with interesting hardware and software features to give it an edge over the competition. Oh and there's also a 6.8-inch phablet version, the P8 Max! 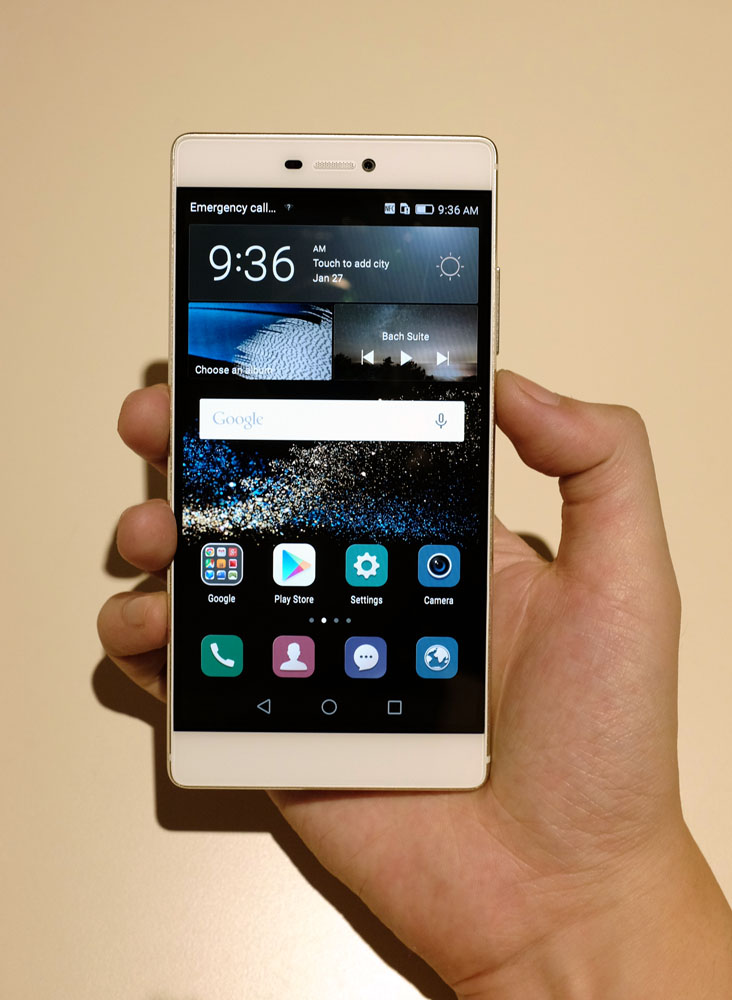 The P8 is super slim. In fact, at just 6.4mm it's one of the thinnest phones out there. Best of all, unlike the iPhone 6 and Samsung Galaxy S6, it's completely flat, with its camera bump sitting flush with the rear of the device. 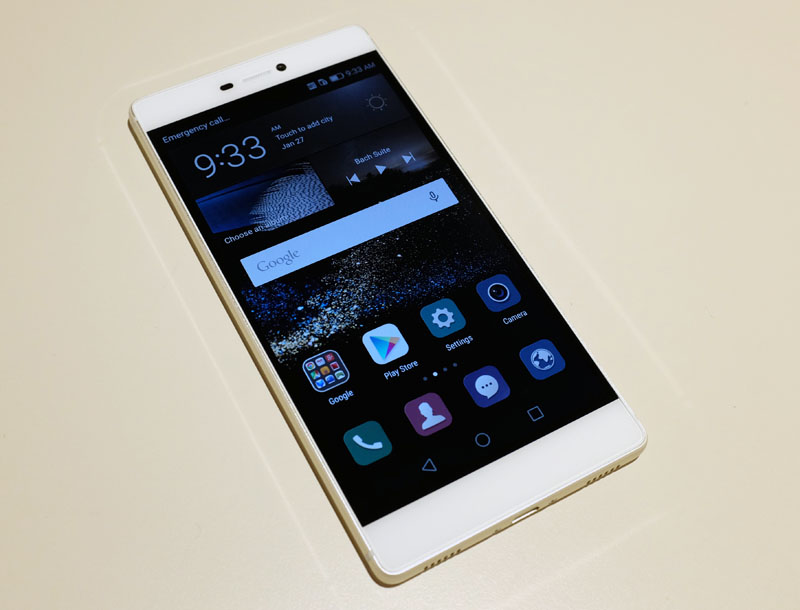 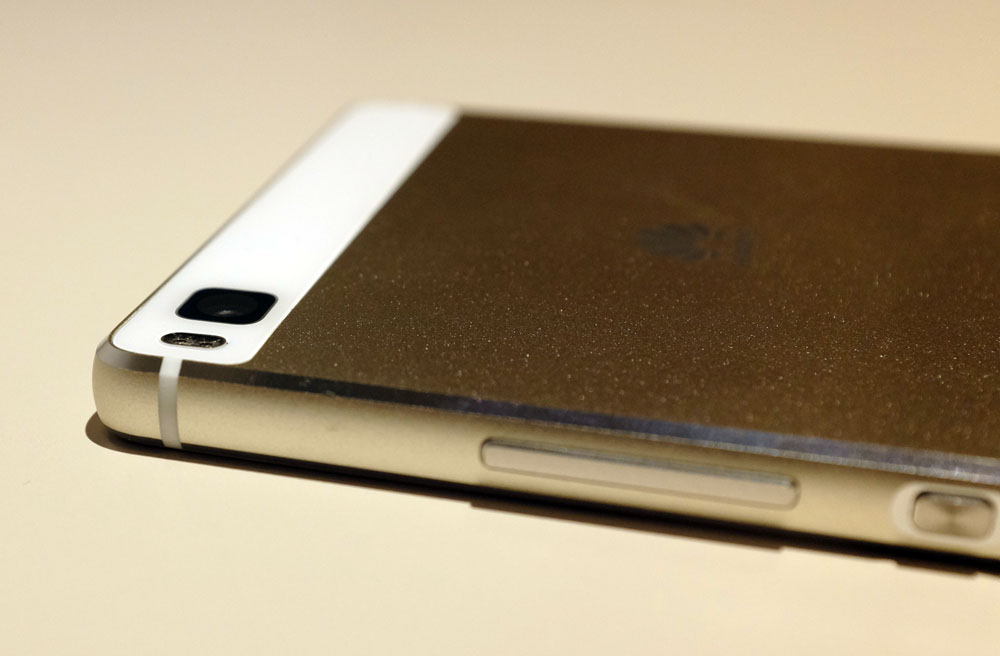 Compared to last year's P7, the P8 looks a bit more squarish, with the curved edge along the bottom of the P7 now gone. The square design is echoed in the interesting squarish power button, which can be found on the right-side of the phone. Over here, you'll also find the volume rocker and slots for the nano SIM card and microSD card slots (which also doubles up as a second nano SIM card slot).

Despite the more squarish look of this year's P8, the frame of the phone isn't actually entirely flat, it's slightly rounded, although the curve is far less pronounced than the ones found on the iPhone 6. It's just enough to make the phone comfortable to grip, without being too slippery.

On the front of the phone, razer thin bezels haveallowed Huawei to pack a 5.2-inch Full HD display into a pretty compact-sized phone, and the P8 actually boasts one of the best screen to body ratios around, at 78.3 percent (for reference, the front of the iPhone 6 is only 65.8 percent, and the front of the Samsung S6 is 70.8 percent). The display is topped with Gorilla Glass 4, and Huawei have also given it a nano-coating to protect it from liquids spilling on top of it.

On the bottom of the phone, the P8 sports fairly loud dual speakers. Huawei has put some effort into making the P8 a decent audio player, and it boasts an on board Hi6402 DSP for improved audio quality. 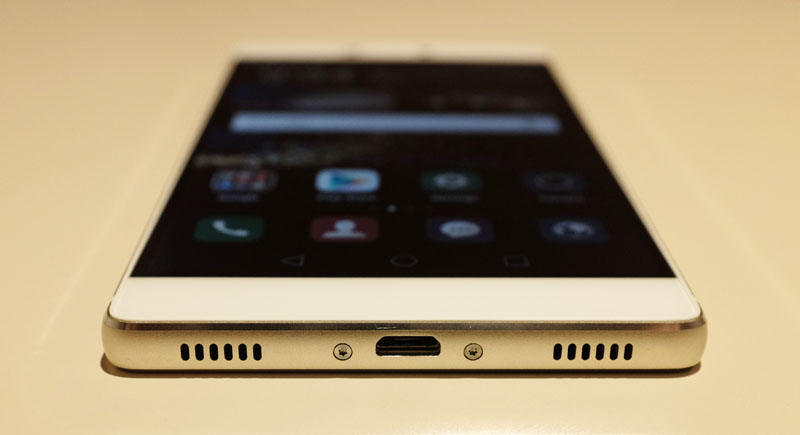 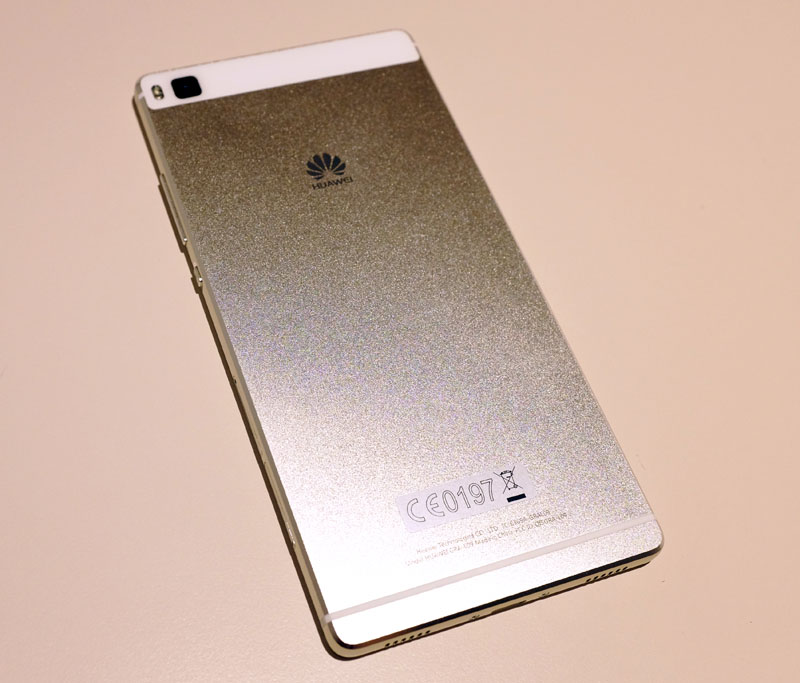 The star feature of the P8 is its camera module. Huawei were quick to state that it's "not all about megapixels" and as such, the P8 has a fairly middling 13-megapixel shooter, but it is equipped with a number of innovative camera technologies that we have yet to see on any other smartphone camera.
First up is the P8's "best in class" optical image stabilisation, which is able to correct camera shake of up to 1.2 degrees. This should make the P8 significantly better better than the 0.6 degree correction provided by the Apple iPhone 6 Plus.

Next up, the P8 has the world's first four-colour RGBW (red, blue, green and white) imaging sensor, with the claim that the camera will be able to more accurately capture a wider range of colours than traditional RGB sensors. Huawei says the extra white pixel also helps keep noise down in low light shots.
Finally, the P8 is armed with an independent image processor, just like you get in a DSLR, aimed at improving automatic scene recognition, providing more natural colours and more balanced exposure.

To complement its hardware, Huawei has loaded a number of interesting software functions into the P8's camera. A long-exposure "Light painting" mode lets you easily capture tail light streaks, star trails, light writing and flowing water, while the new "Director" mode lets you use your P8 to take control of up to three other Android smartphone cameras, and combine the video shot on them into one movie with multiple angles. 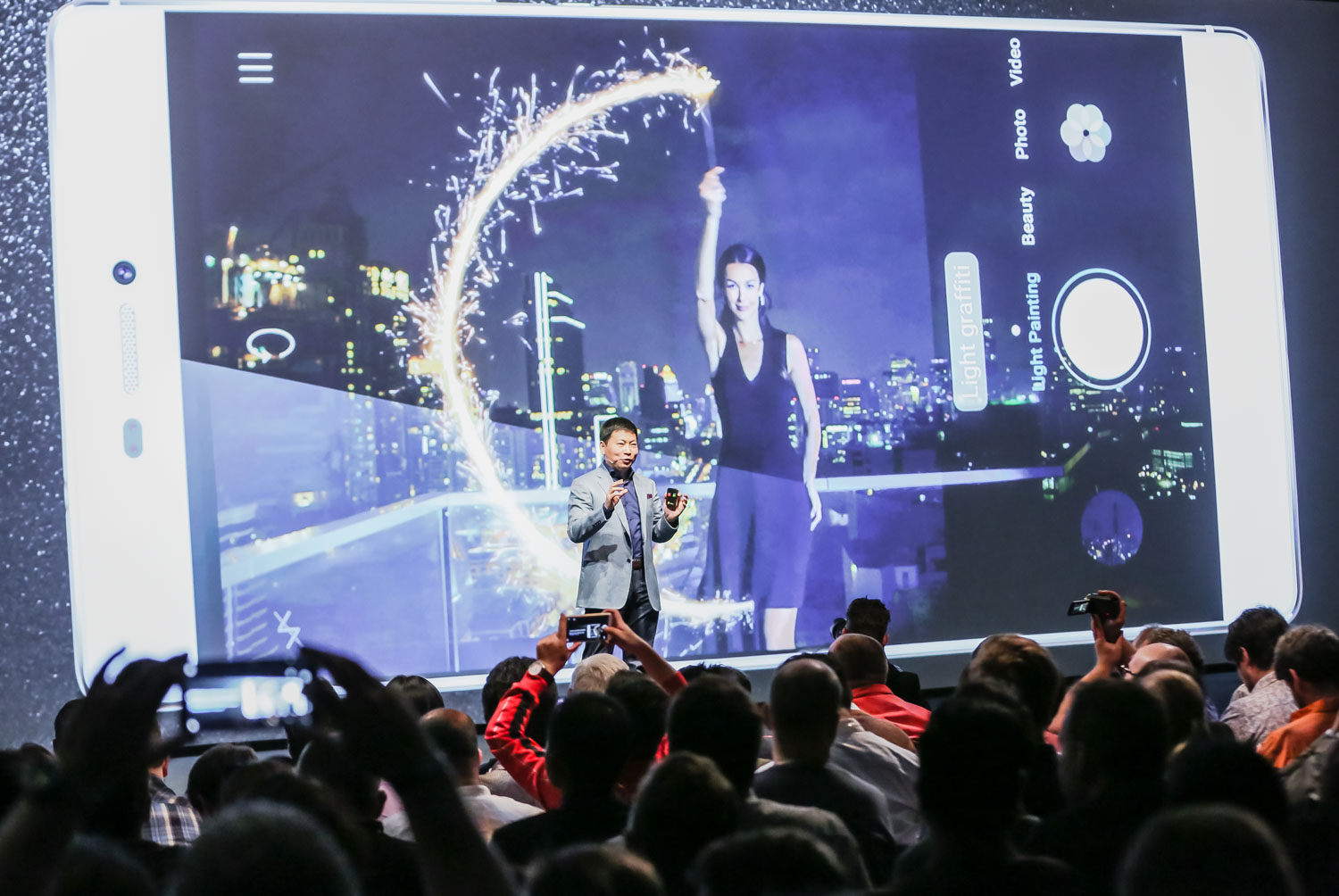 One of the drawbacks of last year's P7 was it's slightly underwhelming performance. Huawei is determined to correct that this year, and the P8 is armed with an octa-core Kirin 930 64-bit processor that Huawei says is 80 percent faster than the P7's Kirin 910.
The P8 is powered by a non-removable 2,600 mAh capacity battery, which is on par with the Samsung Galaxy S6 (2,550mah). However, Huawei claims that battery life on the P8 is much longer, and estimates about one and a half days of normal usage, thanks in part to technology like Huawei's "Power Consumption Firewall", which blocks "abnormal" power usage from background apps.

It seems like everyone is doing the 'one more thing' these days. Huawei's big surprise at the end of the P8 event, was the unveiling of the ludicrously large P8 Max, a 6.8-inch phablet with a Full HD display. 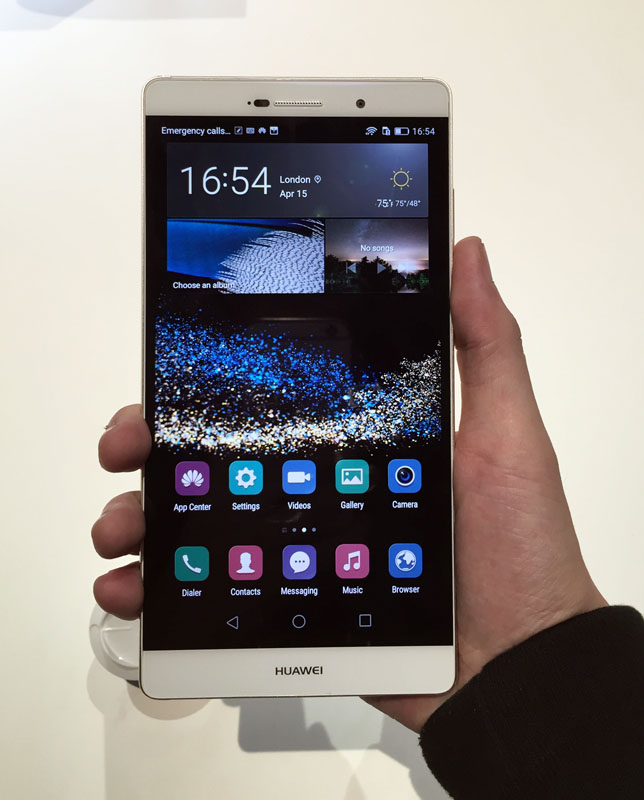 Essentially, the P8 Max is the same as the P8, but adds a multi-tasking view similar to the one found on the Samsung Note Edge 4, and it's also armed with a huge 4,360mAh battery. Despite its gigantic size, the P8 Max is actually rather thin, measuring just 6.8mm. 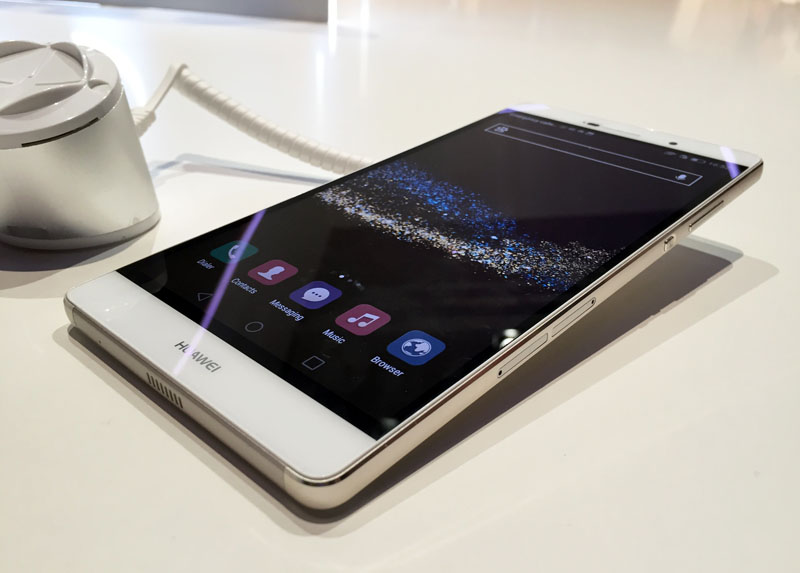 The only real design difference between the two phones is that the P8 Max has a single speaker at the bottom, and the micro-USB port has been relocated to the top, next to the headphone jack. 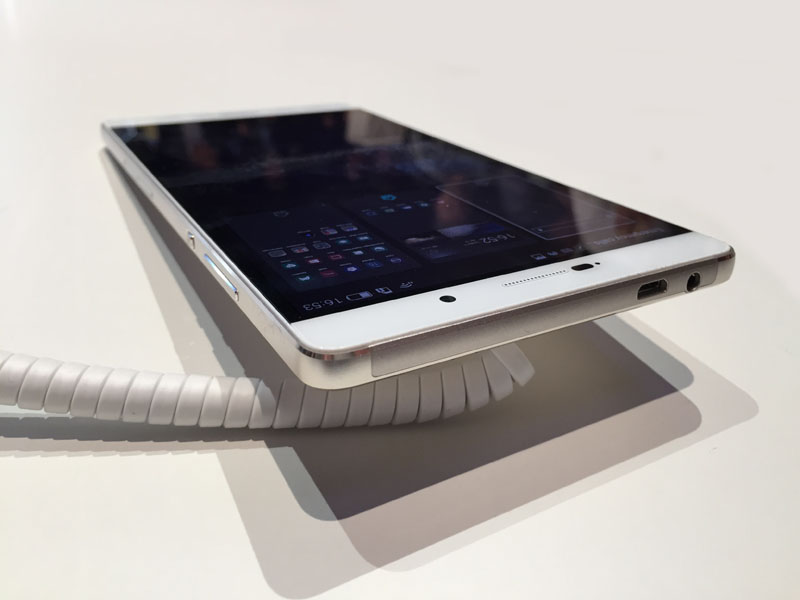 At 6.8-inches, the P8 Max is basically a tablet. Huawei claims that the P8 Max is still pocketable, but you'll need some very large pockets for that.