Update: According to Huawei, the MediaPad X1 is scheduled to go on sale in Singapore by June this year. We'll have more details closer to the date.

The latest MediaPad X1 device from Huawei may look like a tablet, but every bit of its specifications and construction makes it more like a smartphone than a tablet. In fact, Huawei executives are calling it a 7-inch smartphone rather than a tablet while the brand itself, MediaPad, is indicative of it being purely a tablet device. Whatever it is, this new 4G device is fast becoming the talk of MWC 2014 as its price point and design makes it an attractive yet affordable communications, entertainment and productivity tool.

When you first pick up the device, you’ll realize that it’s extremely thin and sleek. The thickness of the device is only about 7.18mm, much less than other popular tablets in the 7-inch category. Compared with the Google Nexus 7 (2013) which measures 8.65mm and the Apple iPad mini with retina display at 7.5mm, the Huawei MediaPad X1 is undoubtedly the thinnest tablet around. 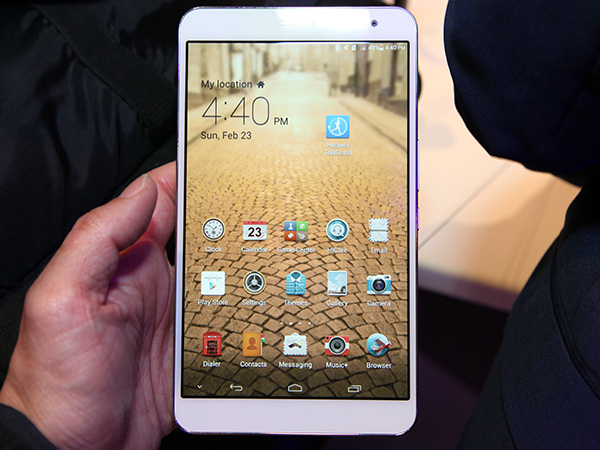 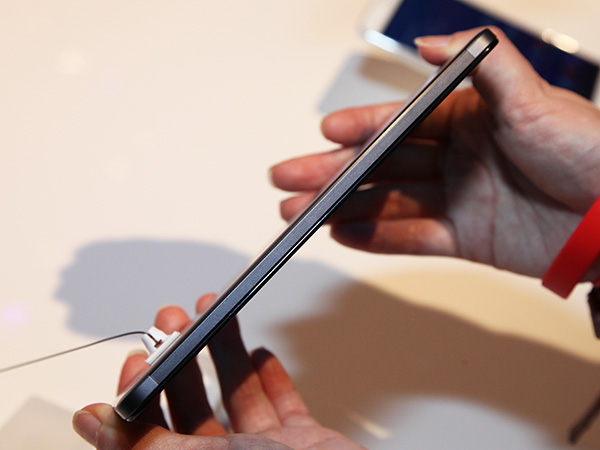 The MediaPad X1 features a 7-inch screen LTPS 1200x1920 Full HD screen. It may not look like a 7-inch tablet because Huawei has reduced the size of the side bezel so much that it’s actually not as wide as most regular tablets we know. In fact, the reduction of the bezel has resulted in an overall improvement to the tablet’s screen-to-body ratio, which Huawei claims to be one of the highest around at 80 percent. Comparing the bezel thickness, we find the MediaPad X1 at only 2.99mm as compared with the Google Nexus 7 (2013) which measures 8.4mm and iPad mini at 6.4mm. It is also the lighter device of the three, weighing only 239g as compared to the iPad mini at 341g and Google Nexus 7 (2013) at 299g.

With the weight and width of the device significantly reduced, Huawei is positioning the device as a pocketable 7-inch smartphone. In fact, it does fit inside most pockets although we feel that movement can be rather restrictive with a bulky item inside your pants pocket.

The software has also been enhanced to solve various usability issues with the device. Huawei recognizes that it’ll be extremely difficult to hold the device without touching the screen. Because of this, the MediaPad X1 features Huawei’s own intelligent grip suppression technology that prevents the hand holding the device from ever affecting your navigation. Thus, even if your thumb is on the screen, it’ll be able to intelligently ignore it since it recognizes it as the hand that’s holding the device. This piece of technology isn’t new as it has already been part of devices like the Apple iPad. 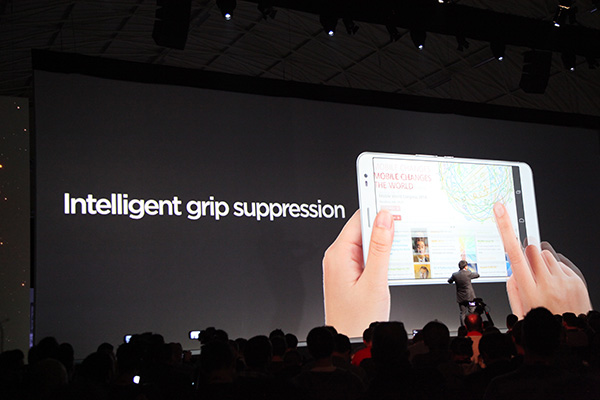 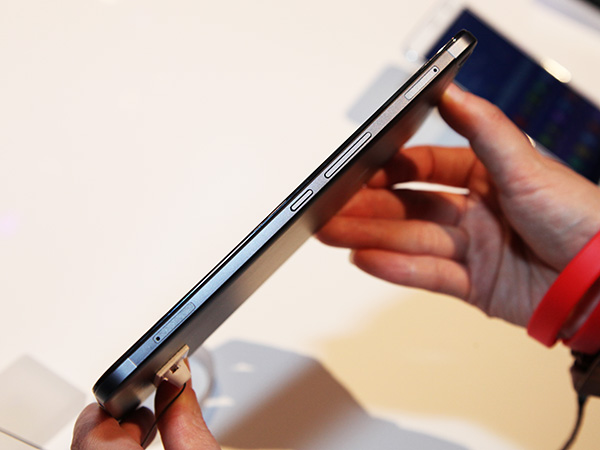 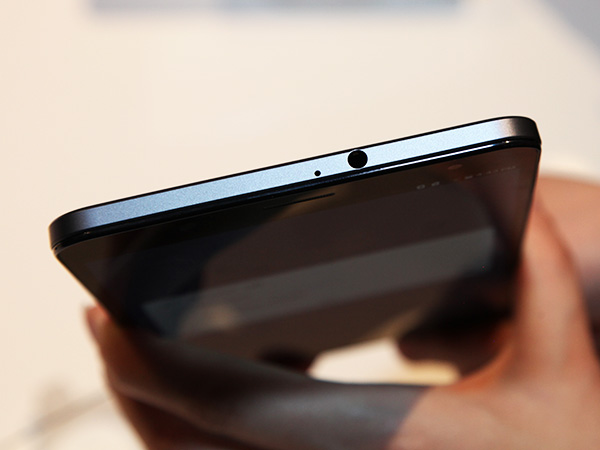 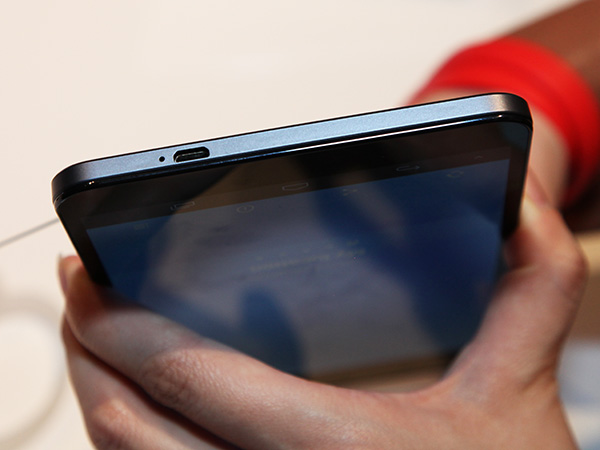 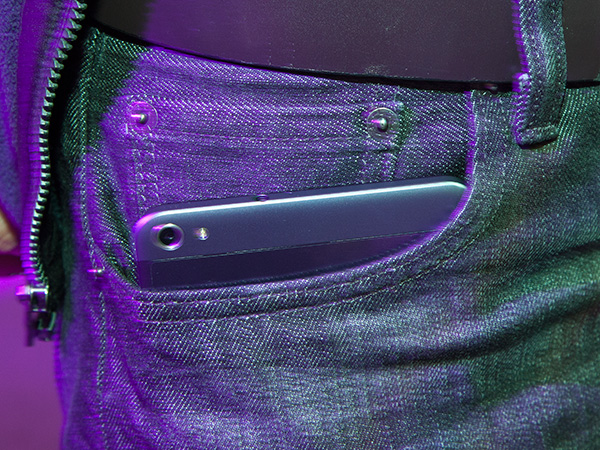 In order to make the MediaPad X1 more smartphone-like, Huawei has also enhanced its cameras. The rear camera on the device sports a 13-megapixel f2.2 28mm camera using a Sony Exmor back side illuminated sensor while the front is equipped with a large 5-megapixel f2.4 22mm camera.

The MediaPad X1 is powered by a 1.6GHz quad-core HiSilicon Kirin910 LTE Cat4 SoC chip that comes equipped with a Mali450 GPU. Although the operating is based on an older Android 4.2 version, Huawei indicated that an update to KitKat will be available in the future, after the launch of the device.

It also features a huge 5000mAh battery that would allow the device to play 8 full movies continuously or surf the internet for 15 hours. Because it has more power than it can use, the MediaPad X1 has a reverse charging feature that lets you use the battery within the MediaPad X1 to charge other devices, sort of turning it into an external battery pack.

The new Huawei MediaPad X1 will be available in black, white, champagne and light pink in China, Russia, Western Europe, Middle East, Japan and Latin America from March 2014 at a suggested retail price of 399 Euros. You will also have the option to buy the MediaPad X1 bundled together with the TalkBand B1 at a special bundle price of 439 Euros. 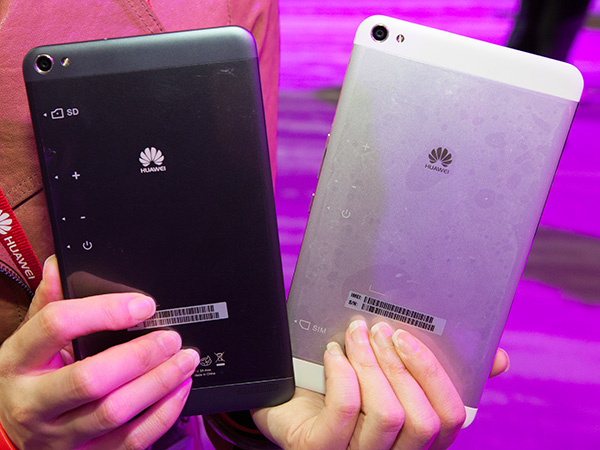 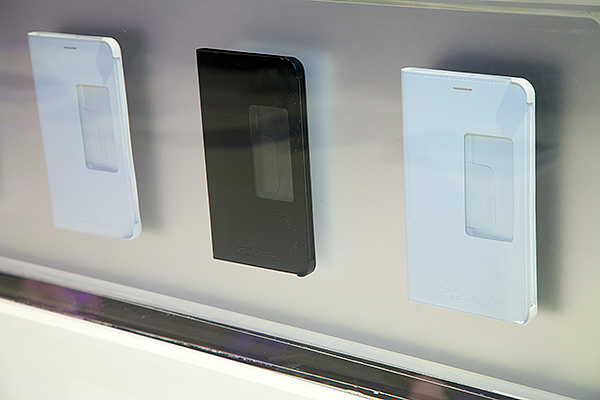