Note: This article was first published on 1st July 2016. 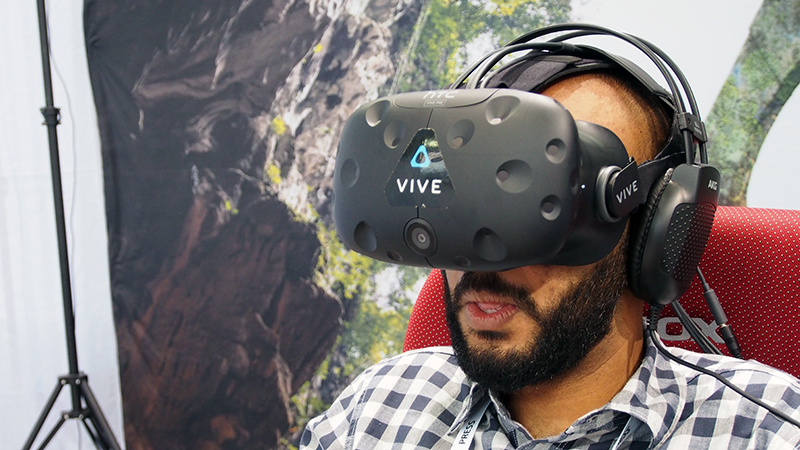 At US$799, the HTC Vive VR headset seemed like it would cost a pretty penny for a gaming experience in Virtual Reality (VR). We were able to give it a try at MWC Shanghai 2016, where many of the vendors were proud to showcase their latest VR game-making efforts with this headset. If you've seen our Computex 2016 coverage, you'd find MWC Shanghai 2016 touting similar rigs, stations, and experiences. 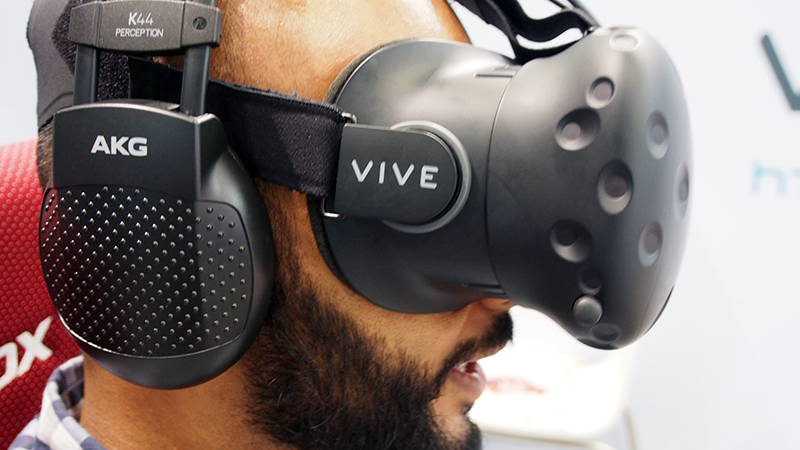 The HTC Vive has a 110° field of view for VR immersion. It uses an OLED display with a combined 2,160 x 1,200 pixels resolution, and the display has a refresh rate of 90Hz. The Vive has 32 sensors within to support 360° motion-tracking. The headset supports the SteamVR platform, and the demo set we tried was a Steam copy of Gunjack. The headset itself had built-in audio and a built-in mic, but we were given a pair of AKG headphones, attached to the headset's 3.5mm audio port. It granted us an improved immersive experience. 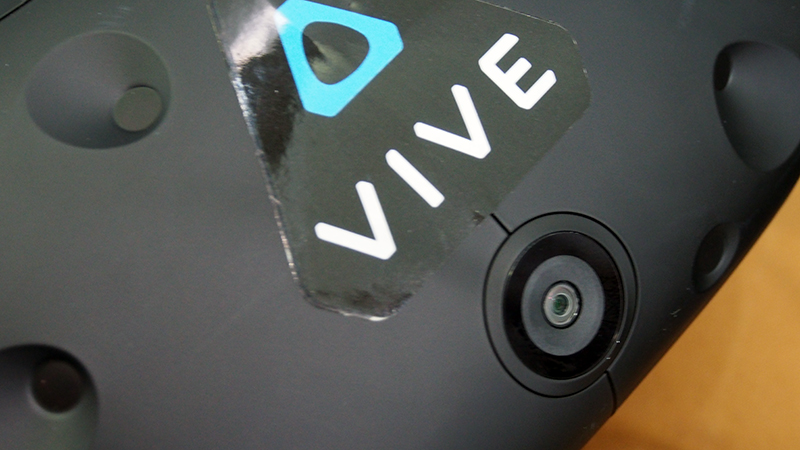 One key feature of the HTC Vive is the front-facing camera, which allows you to see your real world without the need to remove the headset. This was an addition made only this year as earlier demo variants from before didn't feature this. That's extremely handy when you want pick up the headset's controllers without having to remove the Vive itself, especially when it takes some effort to wear and remove the headset. 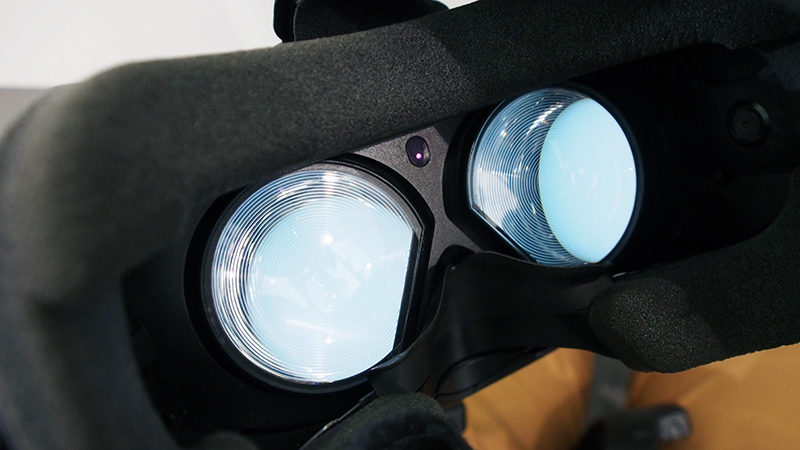 Despite how unwieldy it looks, the HTC Vive has many little features that makes it comfortable to wear. Besides having foam inserts, there's also a "nose gasket" bridge that makes the headset rest comfortably on your nose, and the device has lots of adjustable straps for fitting different head sizes and shapes. You can even keep your glasses on while wearing the HTC Vive. The weight felt properly balanced, and there was no wearing fatigue during our entire trial. Even the HDMI cable wasn't that intrusive, despite it sticking out of the headset and hooking into the gaming system that we were were plugged in. 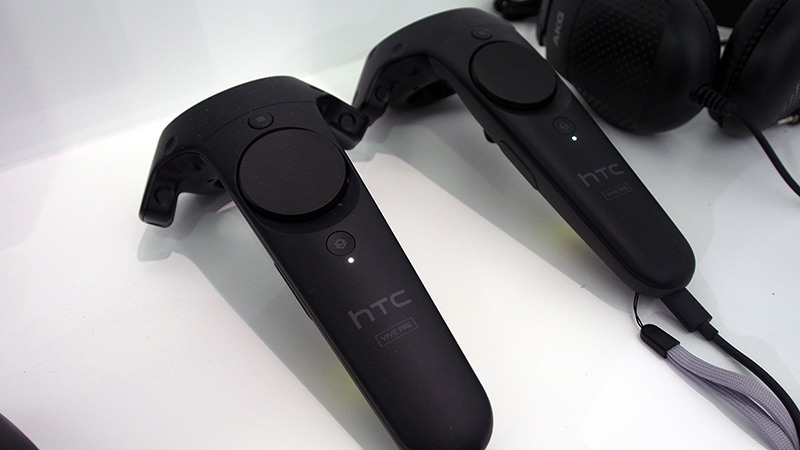 The HTC Vive comes with a pair of controllers. The button placement feels sensible and well-positioned. Your index fingers will rest on a dual-stage trigger button, while your thumbs will sit on a textured, circular directional touchpad. Using the sticks felt natural and intuitive, and its haptic feedback tells us when we do things correctly. It was helpful in this strange, new setting. The Vive controllers are wireless and they can be recharged via its micro-USB cables. 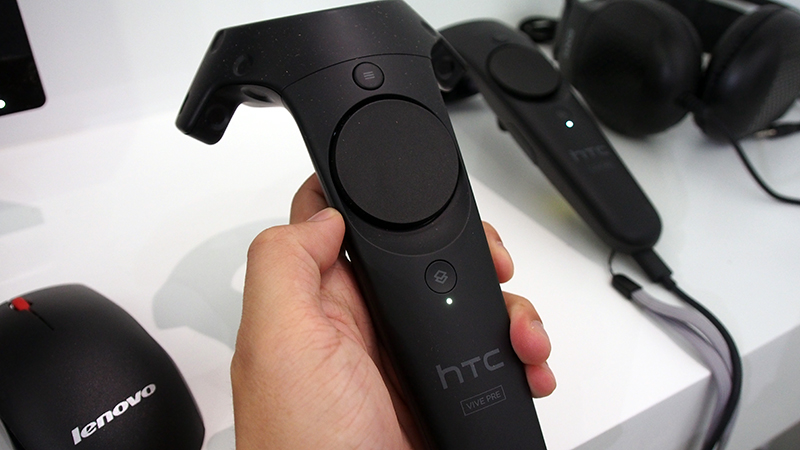 The HTC Vive booth had as many as nine games on display, and we chose to try the HTC Vive via Gunjack because we wanted to test the headset's ability to handle a static First Person Shooter (FPS) game. Since the game guided us through each level's map, there was no need for us to move from our chair. 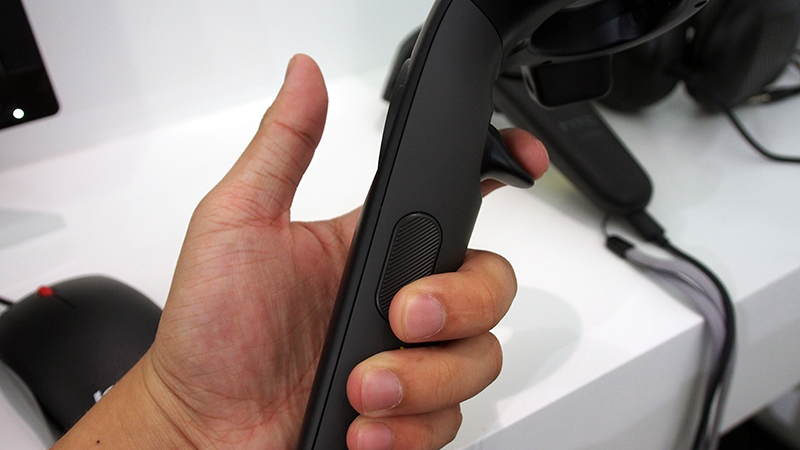 Pointing our crosshair at the enemy AI spaceships was a simple matter of tilting your head. This was more natural than your typical mouse-aiming in a PC FPS game. There was no need for controller-waving, since this game isn't very complex. The trigger button on the right controller fires your primary rapid-fire weapon, while the left trigger releases your limited but destructive alternate fire. Graphics was smooth and immersive, and the Vive was very responsive and accurate when it came to aiming. When we were hit by the AI, the controllers were quick to react by vibration. 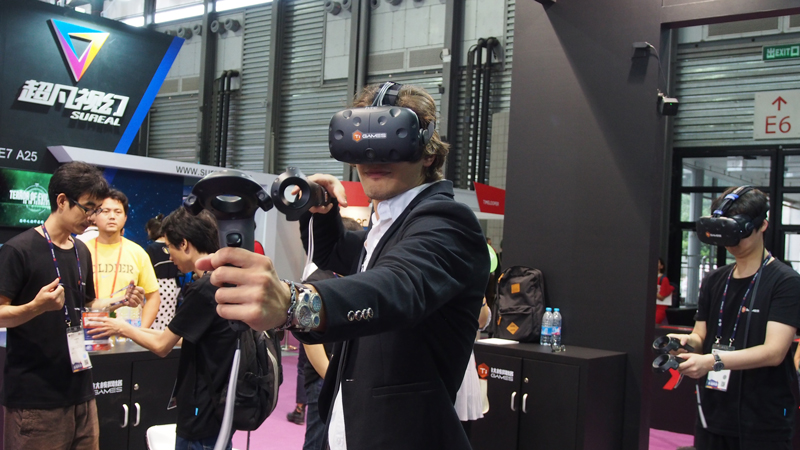 After our tryout, we went around to look at other booths, with far more complex setups and games on display. We chanced upon this demo where the player was expected to take enemies out by nocking a virtual arrow into a virtual bow. It was done with the same HTC Vive VR headset and controllers we were using, so its interesting how the physical orientation of your controllers actually do matter, if the game demands it.

Is the HTC Vive VR headset worth US$799? We'd say yes, but not right now. As with new gaming systems, it takes a while before more compatible games hit the market in full force. Your average player would also wait for critically-acclaimed games that can convince them to part with significant amounts of money to get the headset, the game, and a PC that can support both (hit this link and here to find out more about VR gaming requirements). Currently, things are looking good for the HTC Vive because of its SteamVR compatibility, as that would allow games developed with VR in mind to be supported via your Steam game account. If you're an early adopter of VR technology, we'd say it's ready for you to show some support in this field.

You can order the HTC Vive on their official website, but shipping it over to Singapore can be a little tricky, as they are not directly available here.