According to HTC, the three biggest breakthroughs in the history of consumer technology were all centered around how you interact with a device: the first real time display, the first mouse and GUI, and the first touchscreen. HTC believes its new phone, the U11, will introduce the next breakthrough in interaction: squeeze.

Design-wise, the HTC U11 uses the same Liquid Surface Construction as the U Ultra and U Play, launched earlier this year. Compared to the U Ultra, the 5.5-inch U11 is smaller and more manageable to use one-handed, but essentially looks the same. This design sandwiches two curved glass panels (Gorilla Glass 5 on the front, and 3 on the back) around a color-matched aluminum frame. Unique to HTC, the glass rear curves symmetrically around the corners, rather than just at the top and bottom, like other rear glass smartphones. HTC has also made a few improvements on the design from the U Ultra: it's now IP67 dust and water resistant, meaning it can be fully submerged in 1m of water for up to 30 minutes. The ugly camera bump on the rear is gone too, the new rear camera is sleek and flush with the back of the phone. While lots of companies make glass and metal smartphones, HTC truly stands above the competition in the selection of colors it offers. Along with the gorgeous Sapphire Black, Brilliant Black and Ice White colors, that we previously saw on the U Ultra, HTC will also be introducing two new colors exclusive to the U11: Amazing Silver, and Solar Red. From the looks of it, Cosmetic Pink appears to be exclusive to the U Ultra and U Play. Amazing Silver color looks silver in some light, and light blue in others, while Solar Red has strong gold overtones - HTC likens it to the color of a sunset. Both colors are unique and are definite head turners. In certain light, the Solar Red looks like a block of gold. Amazing Silver will launch with the phone in June, while Solar Red will be available at a later date. 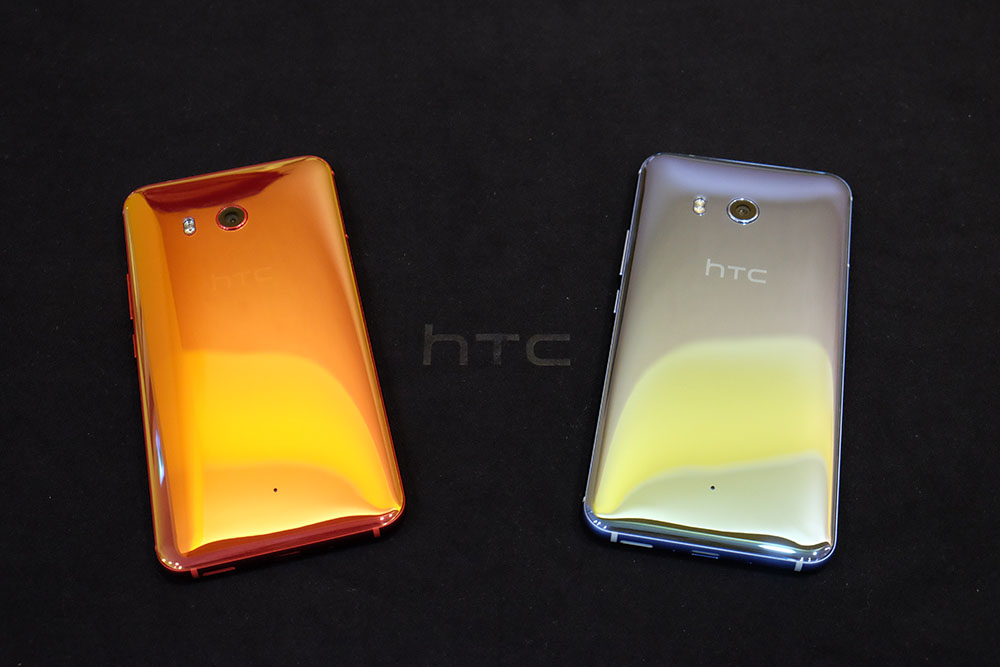 What sets the U11 apart from every other smartphone out there is Edge Sense, which is a unique combination of hardware and software that uses eight super-thin pressure sensitive strain gauges in the lower half of the frame (four on each side), to let you squeeze the U11 to register input. There's haptic feedback vibration when you activate the feature and you can adjust the sensitivity if you prefer a firmer or lighter squeeze. Proximity sensors ensure that Edge Sense only activates when you're actually holding the phone, so a tight fitting pair of jeans squeezing the phone won't do anything. Out of the box, Edge Sense will recognize one input - short squeeze. By default, this is used to quickly launch the front-facing camera when the display is off. When the camera is on, you can squeeze the edge to take a selfie. When users are more familiar with Edge Sense, they can activate Advanced Mode, which adds a second input - long squeeze or "Squeeze and Hold" as it's called in the settings menu. If you're in the camera app, by default, a long squeeze will flip the camera to the rear facing camera.

Both short and long squeeze can be customized to launch any app. HTC's example showed the long squeeze being used to quickly launch Google Assistant or Amazon Alexa (both are available on the phone) but you could use long squeeze to quickly turn on the flashlight or any other app. When the phone launches you'll also be able to add Edge Sense functionality to any app. HTC will be releasing an Edge Sense app that will let you replicate a single or double tap at a specified position on the screen with short or long squeezes. When you're setting up each app, you'll be able to drag a small box around the screen to indicate where you want the tap to occur. So for example, you can set up Instagram so that every time you squeeze, Edge Sense will replicate a tap on the screen over the Instagram shutter button to take a picture.

According to HTC, the Edge Sense feature will work with a case, but you may have to squeeze harder to activate it. Soft cases, such as those made from leather or silicon, will work much better than tough hard cases. HTC is also supplying a clear plastic case with the U11 that has the sides cut out, so it won't interfere with Edge Sense.

The U11 has a 5.5-inch QHD Super LCD 5 display (~534ppi). The display is bright and vibrant with plenty of contrast, but unfortunately it does not seem to support Mobile HDR content. Unlike the U Ultra, there's no secondary display on the U11.

The U11 sports HTC's BoomSound Hi-Fi edition speakers. Like the U Ultra and HTC 10, the stereo speakers use the earpiece speaker and a single downward-firing speaker on the bottom of the phone rather than two dedicated front-facing speakers like old HTC phones. Having said that, HTC tells us that the internal speaker design has been improved, with the entire body of the phone now acting as a resonant acoustic chamber, resulting in louder sound and deeper bass. In my brief hands-on with the phone I can confirm that it does indeed sound much louder and bassier than the U Ultra. 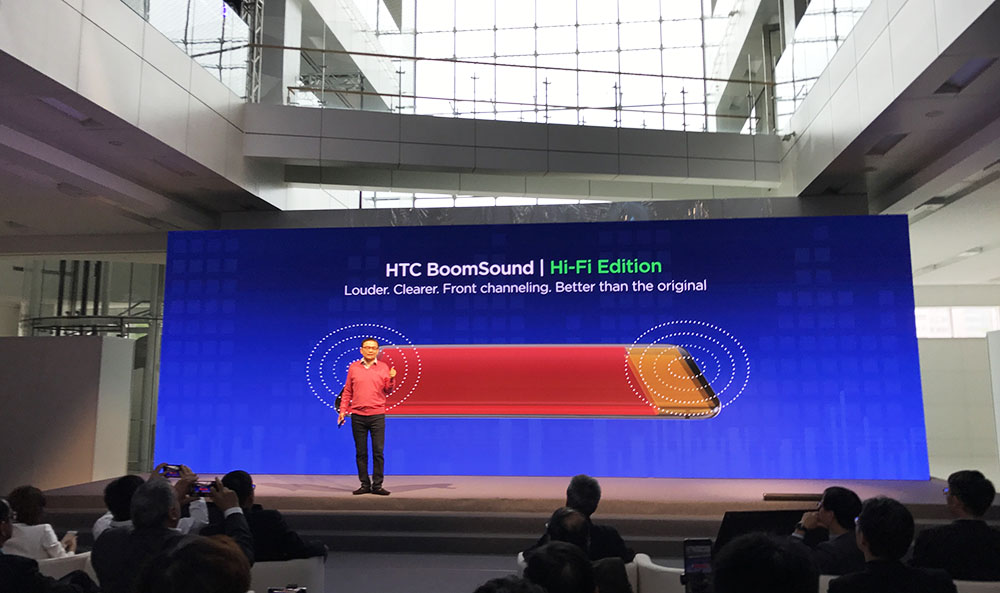 Like the U Ultra, the U11 doesn't have a 3.5mm headphone port, but it does come supplied with a pair of HTC's USB-C USonic earphones. These earphones have a special microphone inside that will map the inside of your ear canal to provide a custom listening experience, tailored to the shape of your ears. The USonic earphones supplied with the U11 have also been upgraded with active noise cancelation, which is also powered through the USB-C port. Thankfully, unlike the U Ultra, HTC is also supplying a USB-C to 3.5mm adaptor with the U11, so you can use your own headphones if you want. Interestingly, HTC says that there's a performance-grade DAC built right into the adaptor.

HTC has also improved the audio recording capabilities on the U11, and has fitted it with four Acoustic Overload Point microphones, which lets it capture full stereo sound. Right now, the only other phone that does this is LG's V20 (the new G6 only has three AOP microphones). The U11 also has an interesting feature called Acoustic Focus, which lets you isolate an audio source and eliminate background noise while you're recording by zooming in on your subject with the camera.

The U11 sports a brand new rear camera. The 12-megapixel, f/1.7 shooter boasts a large 1.4μm pixel size, optical image stabilization and HTC's UltraPixel 3 technology. It also has UltraSpeed AF and improved HDR. The camera is the only smartphone camera to score a 90 on DXO Mark, so we're looking forward to testing it out ourselves. The front camera is a 16-megapixel, f/2.0 shooter with UltraPixel technology. Unfortunately, unlike the HTC 10 it does not have optical image stabilization.

The U11 is powered by Qualcomm's latest Snapdragon 835 processor. There will be two specs available, a 4GB/64GB model, and a 6GB/128GB model. Singapore will be getting the higher spec model. The phone is powered by a 3,000mAh battery. Oddly enough, despite running on a Snapdragon 835, the battery only supports QuickCharge 3.0, not Qualcomm's newer 4.0. Nevertheless, HTC says that it has performed a number of optimizations inside the U11 that will give it approximately 35% more video and call uptime than the HTC 10, and up to 45% more browsing battery life.

The HTC U11 will be launched in select countries next week (UK, US, Europe) with the rest of the world (including Singapore) launching in early June. Local pricing has not been announced yet, however, it should be similar to the U Ultra, which launched here for S$898.

In Europe, the U11 will retail for €749 (~S$1,155) which is the same price as the U Ultra. Do note however that Europe is getting the lower spec 4GB/64GB model, so it might be slightly more expensive in Singapore.

At launch the Amazing Silver, Sapphire Blue, Brilliant Black and Ice White models will be available, while the Solar Red will launch at a later date.