If you’ve been keeping up with the recent avalanche of tech news our site (mostly due to the IFA Show in Berlin), you’d notice that one of them is regarding HP’s new touchscreen Ultrabooks. As luck would have it, HP graciously invited us down to have a feel of the products which have been announced. If you’ve been busy getting the latest deals at Comex, and haven’t had a chance to check out what was launched, we'll be delving into the details of the upcoming Windows 8 devices - the HP Envy Touchsmart Ultrabook 4 and the HP Envy x2.

The 14-inch HP Envy Touchsmart Ultrabook 4 (TSU 4) is simply an Envy 4 Ultrabook repackaged to include a touchscreen (but still sports the same 1366 x 768 pixels resolution). As you can see below, the notebook looks identical to the Envy 4. It has the same aluminum body which made the Envy 4 such a sturdy little machine. The only difference here is, that the screen of the TSU 4 had to be fitted with a touch technology, which added about 2mm and almost 360g more to the machine (23mm thick and 2.16kg). However when we held the machine, the differences were barely noticeable. 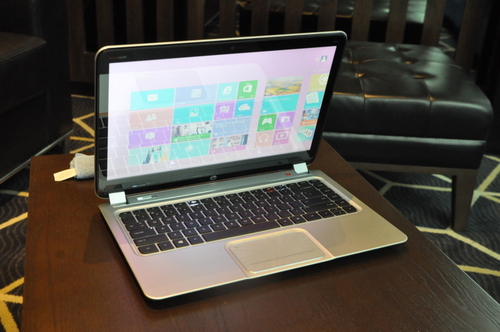 According to HP, another difference that the TSU 4 has over the Envy 4 is the lack of discrete graphics. We’ve been advised that there is an option for discrete graphics, but only in the US for now. However, if local demand for TSU 4 with discrete graphics is high enough, you just might see that option reach Singapore. As for color options, the TSU 4 is only available in silver for now. If you’re looking for TSU 4 with the black and red color scheme (as seen on the Envy 4), you might be out of luck as there are currently to plans to bring that color scheme in to Singapore.

When Microsoft showed their new Surface tablets in June, you might have probably guessed the direction in which major notebook manufacturers would have embarked on next. (In fact, if they did not, they’d be shooting themselves in the foot.) So here is HP’s response, the HP Envy x2. This is a 11.6-inch tablet that comes with a keyboard dock, very similar to the somewhat successful ASUS Transformer line of tablets. 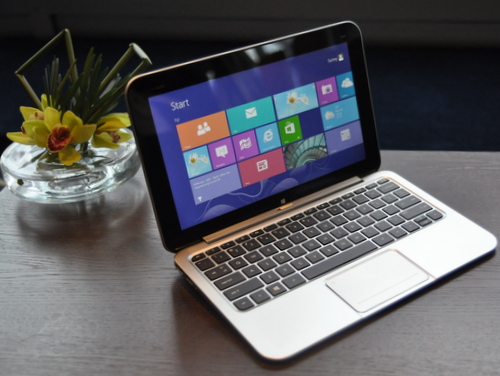 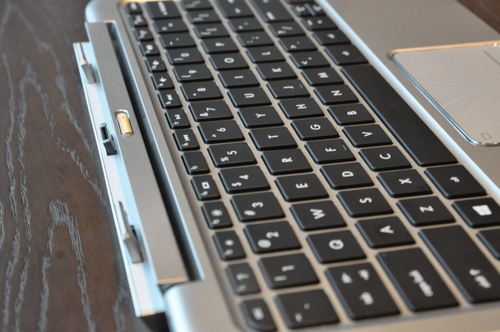 The docking system is also very similar to the ASUS Transformer Pads. However according to HP, there are a couple of magnets in place, that help the tablet fit smoothly in. When we tried it, it worked as intended. However when we tried shaking it slightly, the whole tablet just didn’t feel like it was firmly locked in place with the keyboard dock. Of course, this could be due to the fact that it was a prototype unit, so future retail models might have this aspect corrected; we'll just have to give it a second chance in the near future.

We also tried testing the balance of the unified device. Like most other tablets with docking devices, it doesn’t take a very hard push to topple it backwards. That’s even when the 700g keyboard dock has a battery (21Wh) that is almost similar in capacity to the one built-in to the tablet (25Whr). But of course, this is to be expected since all the functional aspects are built within the tablet device, thus it will have a certain amount of heft until manufacturers find a way to reduce the weight of the tablet drastically. 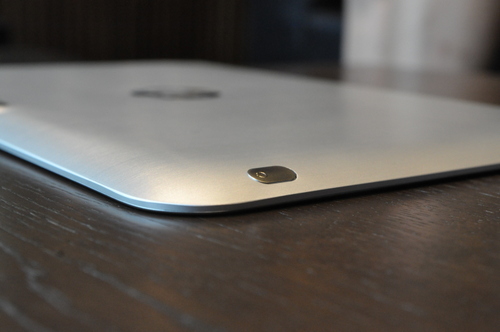 The HP Envy x2 tablet (along with the keyboard base) was entirely constructed out of aluminum, one of the more premium materials for computing gadgets. Tried as we might from the limited hands-on time, we couldn't find a single squeaky spot out of the tablet, which is a confirmation of sorts of its good build quality. Wen the tablet was attached to the base, the whole unit looks like a smaller version of the HP Envy Spectre XT. And like the Envy Spectre XT, the keyboard was very comfortable to use, with plenty of key travel. Even the trackpad's build was similarly rigid, which provided plenty of positive feedback when used.

Next on our agenda we wanted to know how using the tablet as a reading device felt. On paper, the tablet weighs 710g (60g more than the new iPad), but it felt reasonably light and holding it with one hand was fairly comfortable. This is because it’s a fairly large tablet (in terms of area occupied), so overall weight was better distributed. The tablet's aggressive tapered design on the sides of the Envy x2 also contributed to its 'perceived' light weight of the tablet as it improved the device's overall handling and usability aspects.

Specs and other Technical Matters

So we touched upon a number of the HP Envy x2's overall usability matters, so let's discuss on some of its technical aspects, starting from the exterior. At first glance, the screen looks pretty bright. At 400 nits, it’s certainly one of the brightest screens you can find in the market right now. The only device that we've personally handled with an equivalently bright screen is the Samsung Series 9 premium notebook. The drawback with such a bright screen is that it will draw considerably more power. However this gives users the option to turn up the brightness when working under bright lighting conditions, and turn it down elsewhere to help it extend its overall battery life. We'll find out about the tablet's stamina and battery life juggling capabilities when we get hold of a retail unit for review. 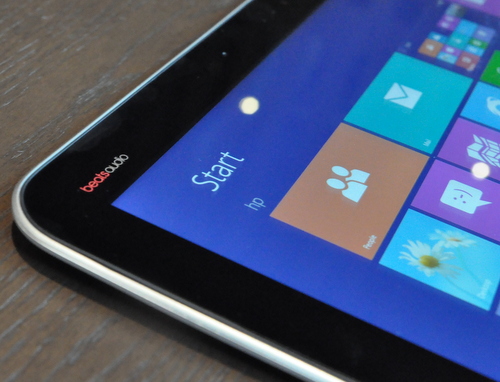 The main issue with the screen in our opinion is the limited resolution (1366 x 768 pixels). When Android tablets like the ASUS Transformer Infinity are able to equip a full HD screen, what’s stopping HP (or other upcoming Windows 8 tablets) from doing so? The formal reply to this, would be that it’s a necessary evil to keep the price of the Envy x2 in check. Another lesson which we’ve learnt from other tablets (like the new iPad), is that higher resolutions draw more power. On the flip side, this tablet has a large enough battery pack, thanks to the keyboard dock.

The tablet itself has a pretty decent 25Wh battery, while the dock has a slightly less 21Wh battery pack integrated. Together, you’d get a battery capacity of 46Wh, which is pretty standard of a typical Ultrabook, but the difference is the Envy x2 isn't one. In a normal Ultrabook with a low-voltage processor, you can expect to see about 3 to 3.5 hours of intensive usage. However, the x2 is a little bit different thanks to its processor.

We tried to pry some information from HP regarding the processor type. But because this information is embargoed, you’d have to wait till September 29th to find out. What we are allowed to say however, is that it’s decked with one of Intel’s next generation system-on-a-chip (SoC) solutions called Valley View. Because Intel’s SoCs are meant to compete against ARM chips, it is safe to assume that power usage will be much lower than the typical x86 processors from Intel. And the best part is, a device with this SoC isn't constrained to using Windows RT because it's also based on the same x86 processing architecture as with all other Intel and AMD processors. Thus, the HP Envy x2 will be capable of running a full version of Windows 8, just like the unit we've been using for this hands-on session.

When we tried navigating around the operating system, we found that it was generally responsive, save for a few minor hiccups (which HP assured us was due to driver issues on the prototype, and will not appear on retail units), even though it only came with 2GB of RAM. 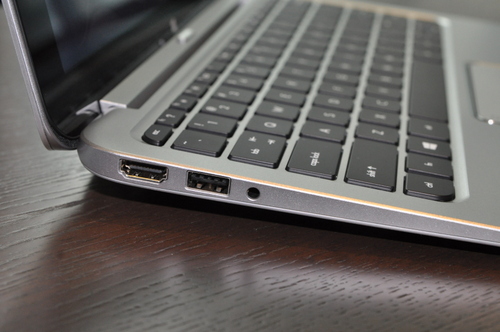 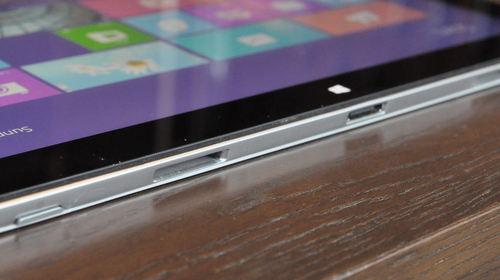 As for storage capacity, it’s currently outfitted with 64GB of flash memory storage, which is sufficient for a casual tablet user. Of course, given its pseudo-notebook like usage, more storage would be beneficial, but again cost concerns had to limit the built-in storage options to make sure it's still attractively priced. The good thing is that the Envy x2 has a microSD slot so that users can expand their storage options.

That’s all we’ve got regarding HP’s upcoming Windows 8 devices. And if you’re as excited about them as we are, you don’t have to wait very long. According to HP representatives, the devices will definitely arrive in Singapore before the end of the year. If we're lucky, we might even see them being available soon after the launch of Windows 8, so keep a lookout for them. 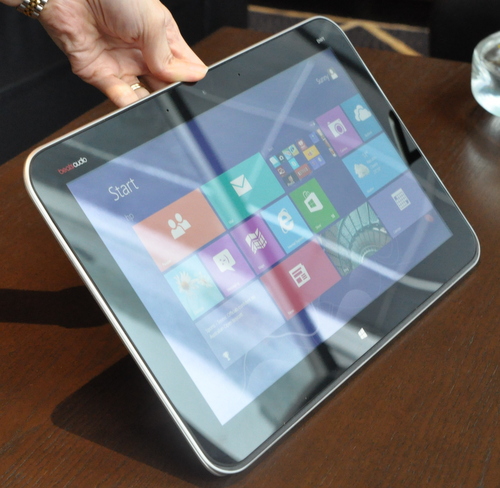