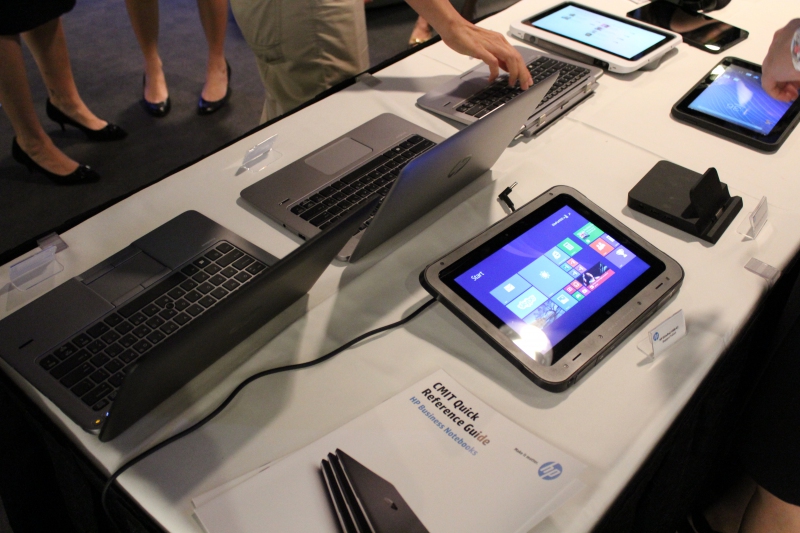 2014 was a big year for HP. In October last year, HP announced that it would be split into two companies - Hewlett-Packard Enterprise and HP Inc. Hewlett-Packard Enterprise will be the entity focusing on business solutions, whereas HP Inc. will be responsible for consumer-related personal systems and products. And today, HP held a special briefing session to share their strategies and products for the business and enterprise scene for the upcoming year.

Mobility is the theme for HP this year. Recognizing the importance that mobile devices play in today's working environment, HP has therefore announced no less than 15 tablets, notebooks and mobile-related devices. While tablets and notebooks are hardly ground-breaking stuff these days, one must remember that these are devices developed specially for commercial use and thus have special considerations such as security, ruggedness, and also ease of implementation into a company's existing IT infrastructure. Additionally, Serena Yong, General Manager, Printing and Personal Systems, HP Singapore and Malaysia, also added that new features were not added just for the sake of it, but according to feedback gathered from HP's many customers (as you would see later).

At today's media briefing held at HP's Customer Experience Center, HP showed off to us what they had in store. Here are the highlights:

What took center stage at today's events was the line of Elite products that HP had was introducing to the marketplace soon. There are three noteworthy mentions here: the Elite x2 1011 G1 is a 2-in-1 convertible Ultrabook; the EliteBook 1020 G1 is a family of lightweight business Ultrabooks; and finally there's the ElitePad 1000 G2 with its multitude of cases, which can be used in various environments. Here's a closer look at them. 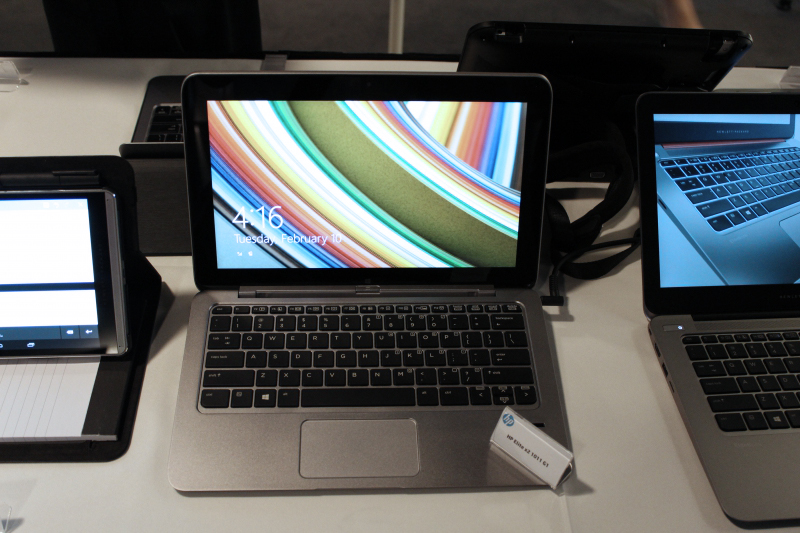 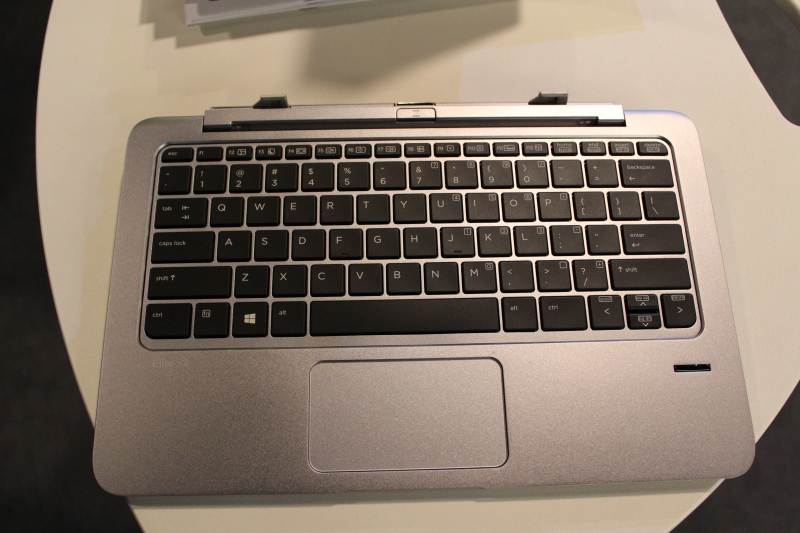 Along with the Elite x2 1011 G1, HP also demostrated its Advanced Wireless Docking Station. Using Intel's WiGig technology, the Elite X2 1011 G1 can dock wirelessly to this docking station to expand its connectivity options. On the docking station users can find display outputs such as HDMI and DisplayPort, and also USB 3.0 ports and an Ethernet jack. In the demo, HP showed the Elite x2 1011 G1 outputting its display via the dock onto an external monitor and there was barely any lag. 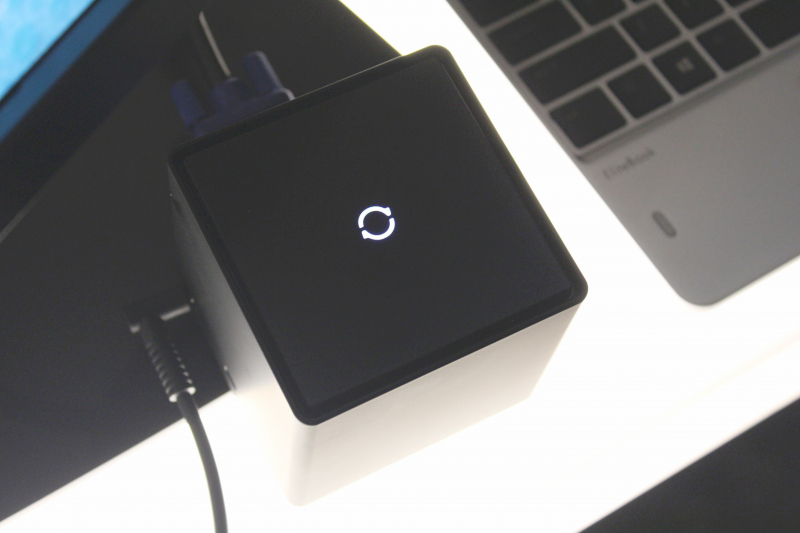 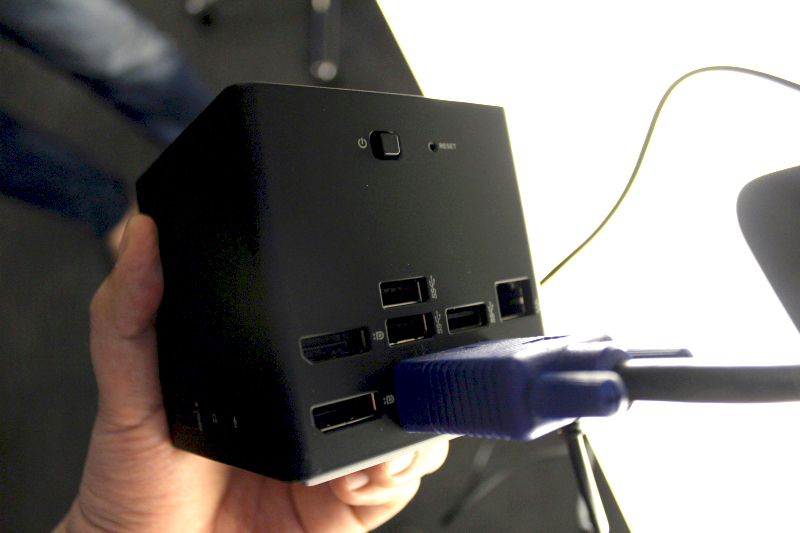 The HP Elite x2 1011 G1 will start at a basic price of $1299 and will be released at the end of February. The Advanced Docking Station was not given an official date of release nor price, but we were informed that it could be ready by March. 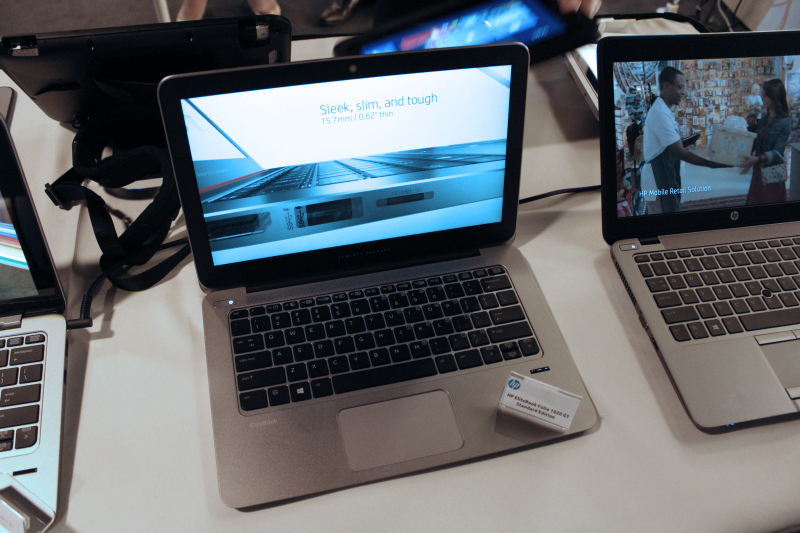 The EliteBook Folio 1020 G1 is HP's ultra-thin and ultra-light 12.5-inch Ultrabook. There's two versions here to choose from - Standard and Special Edition - with the only difference between the two being weight. The Standard model weighs 1.2kg, whereas the Special Edition model tips the scales at just 1kg. This was achieved using lighter materials such as reusable carbon fiber and HP's blend of magnesium-lithium alloy. Sadly, the Special Edition model was not available at the briefing so we could only handle the Standard model, which we found to be light yet sturdy.

Weight differences aside, both models are powered by Intel's new Core M processors and will come with 8GB of RAM as standard. There's a wealth of storage options to choose from, all are flash of course, but HP is also offering self-encrypting drives on the EliteBook Folio 1020 G1. HP is also offering a variety of different displays, both touch and non-touch, and in resolutions of 1920 x 1080 pixels and 2560 x 1440 pixels. Both versions are also MIL-STD810G certified and will come with security features such as TPM chips, fingerprint reader, and HP's suite of security software.

The prices of Standard edition will begin at S$2399 and will be available in March. The Special Edition has not received an official pricing yet, but we can tell you that it has a release date set for May. 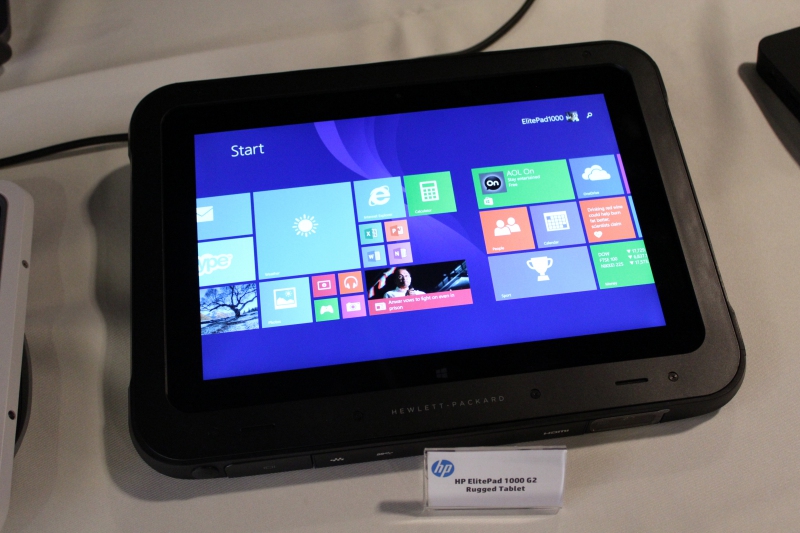 The ElitePad 1000 G2 is a 10.1 inch tablet that is powered by an Intel Atom Z3795 (1.6GHz, 2MB cache) processor, and comes with 4GB of RAM and 128GB storage. These are pretty basic specifications for a Windows tablet device, and the ElitePad 1000 G2 was actually launched late last year. So what was it doing here? Well, HP has designed specialized cases that can be used with the ElitePad 1000 G2.

Shown at the briefing were three different cases - Rugged, Retail and Healthcare. Each of them can be customized to a certain extent but all of them are geared to especially cater to their target industry. For example, the Healthcare case for example has been treated with antimicrobial elements to make it especially disease resistant. In fact, the people at HP are so confident behind their product that they envision it being used in the most sterile environments (like operating rooms) and other areas of the hospital without a hitch. The Rugged case on the other hand is dust and water resistant and can withstand drops from up to 1.8 meters. 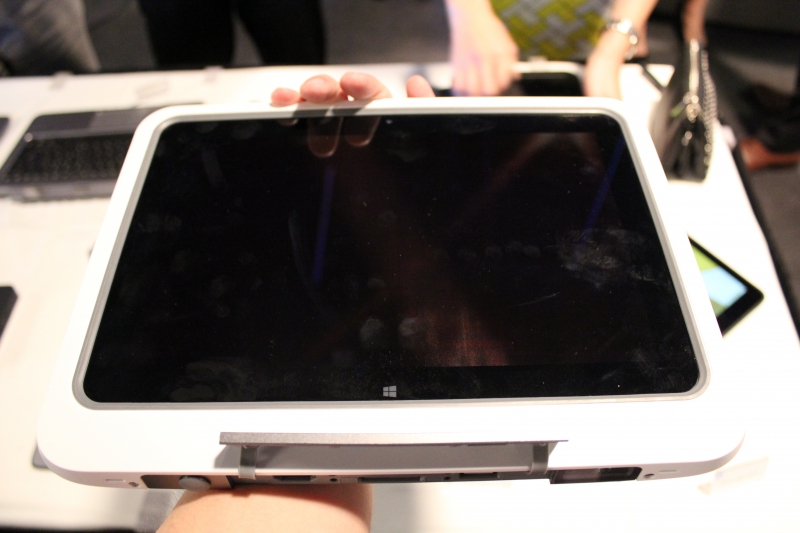 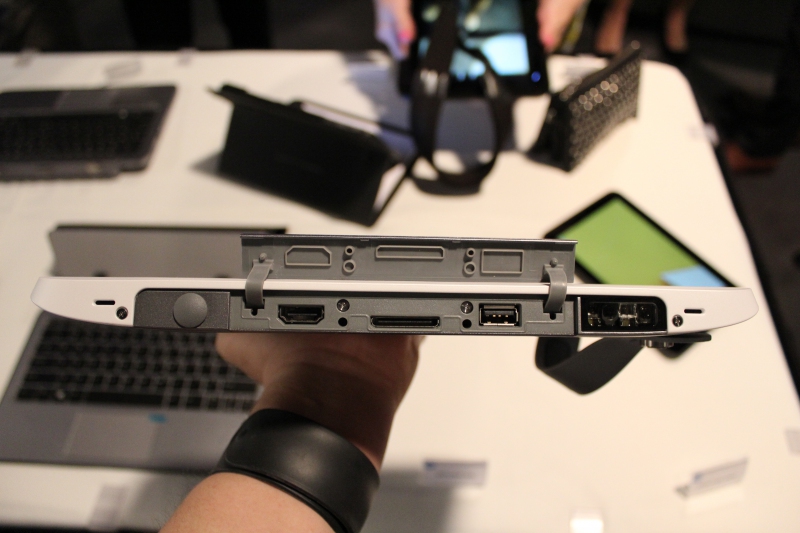 HP has yet to announce prices of the ElitePad 1000 G2's cases, but the Healthcare and Rugged cases will be available in March and May respectively. There's no word yet on the availability nor price of the Retail case. 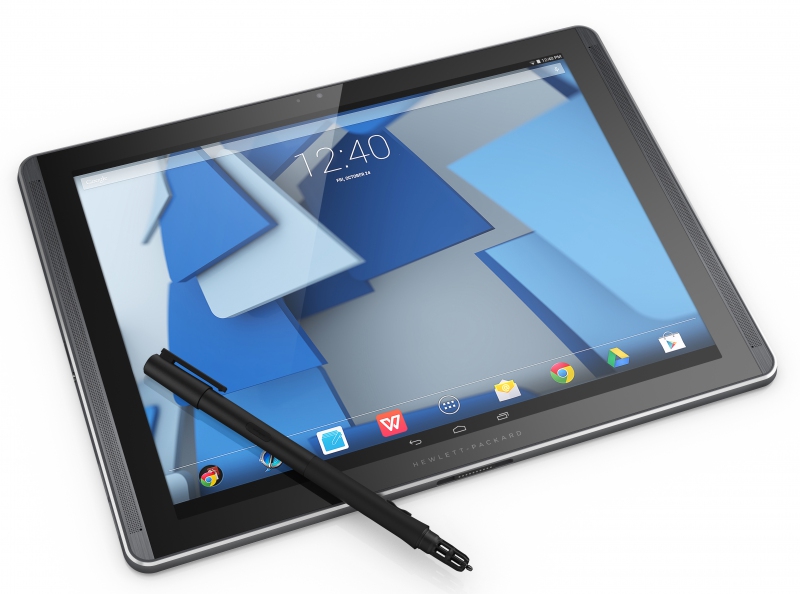 While HP showed off a handful of new tablets, the ones that intrigued us the most was the HP Pro Slate 8 and its bigger brother, the HP Pro Slate 12. Running Android 4.4, these tablets will make use of HP's business security solutions (such as HP's free Touchpoint Manager) to keep everything safe and secure. As for hardware, the Pro Slate 8's display supports a resolution of 2048 x 1536 pixels, whereas the larger Pro Slate 12's display has a resolution of just 1600 x 1200. Both tablets' displays protected by Corning's latest Gorilla Glass 4. Additionally, the two tablets will be powered by Qualcomm's quad-core Snapdragon 800 series processors and will come with 2 GB RAM. And while the Pro Slate 12 will come with 32GB of storage as standard, the smaller Pro Slate 8 can be ordered with either 16GB or 32GB of storage. A microSD slot provides expandable storage for both tablets. 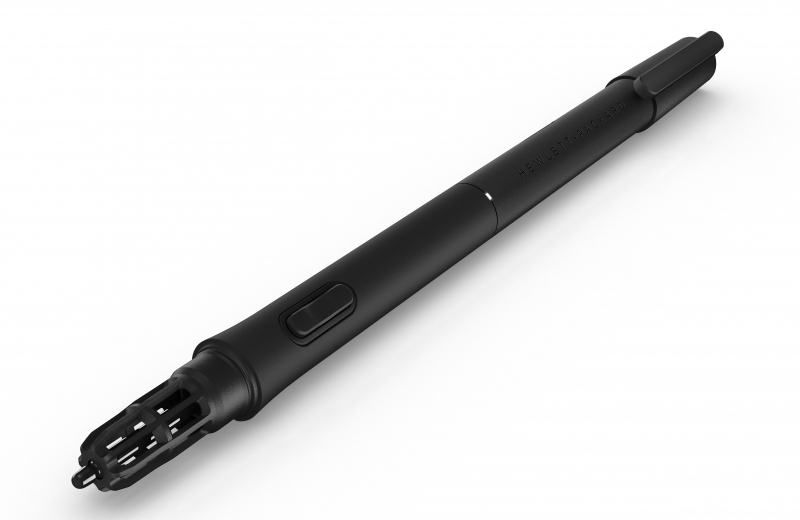 The most impressive feature of these new tablets has to be the bundled HP Duet pen. It's a two-in-one stylus and pen with an detachable nib that acts as a stylus and a proper pen. It slots into a tidy little compartment in the tablets and integrates with the HP Paper Folio case to allow users to take notes and make digital copies of them. Basically, whatever you write on paper next to the Pro Slate tablet will be recorded digitally, like-for-like no less, as a note that users can save and share. As we mentioned, the digital copy is like-for-like, so it even takes the orientation of your notes into account. HP is calling it Blended Reality, we call it awesome. 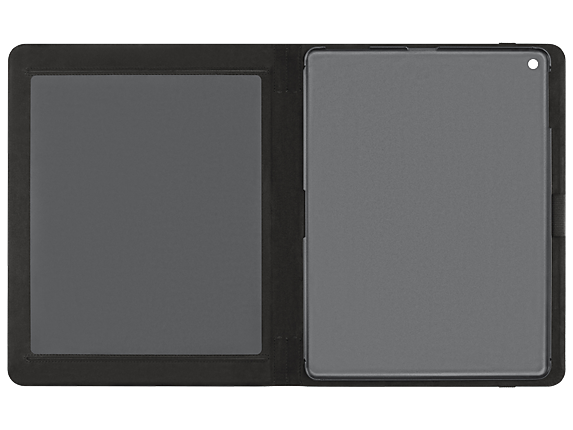 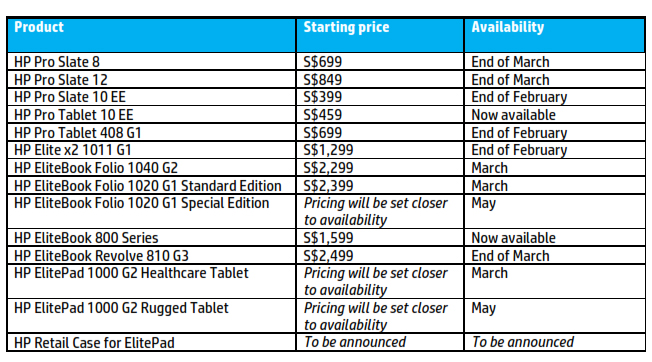 While that wasn't everything HP showed off at the briefing (there simply was too much, as the list can attest), we did try to bring you what we think was the most interesting and exciting. Here is a release date calendar given to us by HP so if any of the above products caught your eye, you can easily use the image to check its release. Personally, we are most eager to test the EliteBook Folio 1020 G1 Special Edition. May can't come soon enough.