The HP Z2 Mini G4 is a powerful compact workstation 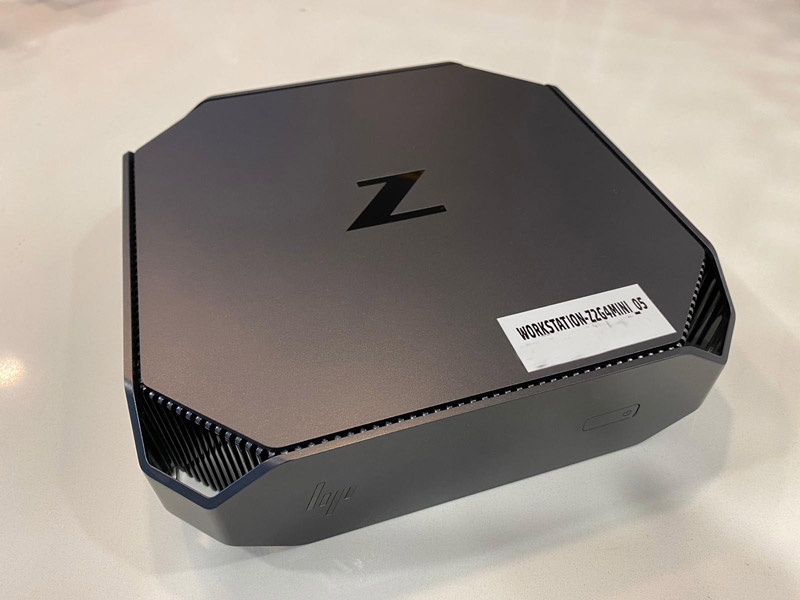 The Z2 Mini is HP’s answer to enterprise customers’ demand for an entry-level workstation for CAD or BIM workflows, and as its ‘Mini’ moniker suggests, the workstation’s chassis is only 216mm (L) x 216mm (B) x 58 mm (H) in size – making it one of the smallest computer from a major brand. The small footprint of the Z2 Mini meant that it can be mounted under a desk, behind a display, or on a wall, housed in a metal sleeve. It is perfect for smaller workspaces and flexible deployment needs. It's so small, you could even lug it in your backpack and a portable screen to have a truly powerful mobile workstation of sorts. 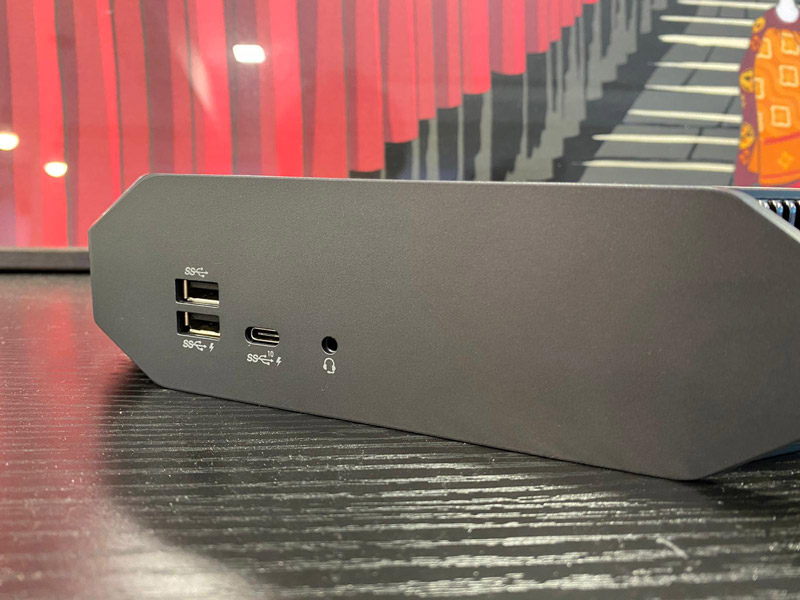 The Z2 Mini we have here is the second-generation HP Z2 Mini – dubbed the G4 Edition – and includes some significant tweaks from its predecessor. It supports the Pascal-based NVIDIA Quadro P1000 or NVIDIA Quadro P600 discrete graphics. AMD fans can even opt for an AMD Radeon Pro WZ4150 GPU. These are mobile MXM GPUs though, rather than standard desktop graphics cards, so they can fit inside the compact chassis. Other aspects that are easy to upgrade are the system memory and the 2.5-inch storage drive. The system also sports an M.2 slot for SSD drives in that form factor, but that will need more disassembly to gain direct access. 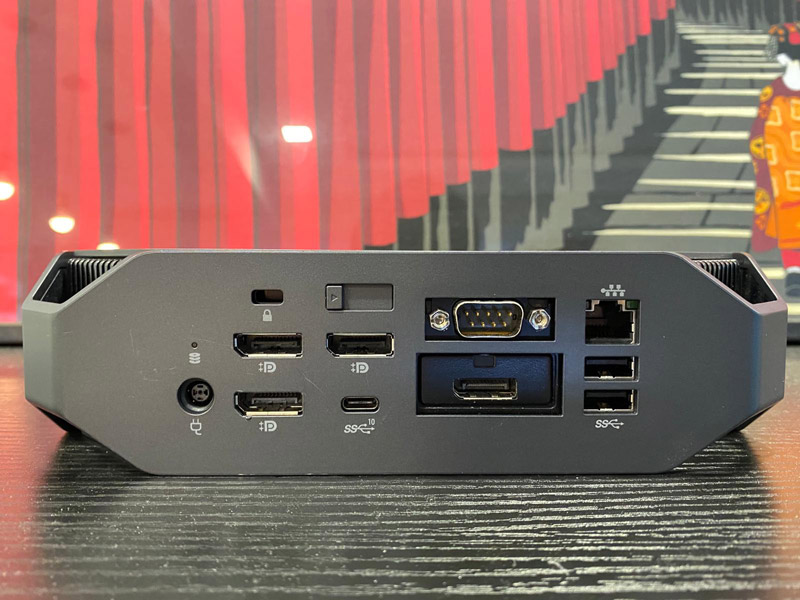 On the CPU front, there’s the option of Intel Xeon E-2100 CPUs, which feature up to six cores and clock speeds of up to 4.70 GHz. Four CPU cores has been the standard in entry-level workstations for over 10 years, so the move to six cores is a big step up for engineering or architecture firms that rely on CAD or BIM software, as well as multi-threaded ray trace renderers.

According to HP’s website, flagship CPU on offer is the Intel Xeon E-2278G, which features eight cores, a base frequency of 3.4GHz and a Max Turbo of 5GHz. This is pretty much the fastest Xeon processor you can get for single threaded applications, such as 3D CAD.

Our test machine featured an Intel Core i7 8700 CPU and NVIDIA Quadro P1000 and 32GB of memory. It may not have been built with a Xeon processor, but on paper the combination is solid enough for entry-level to mainstream 3D CAD, BIM and rendering works. 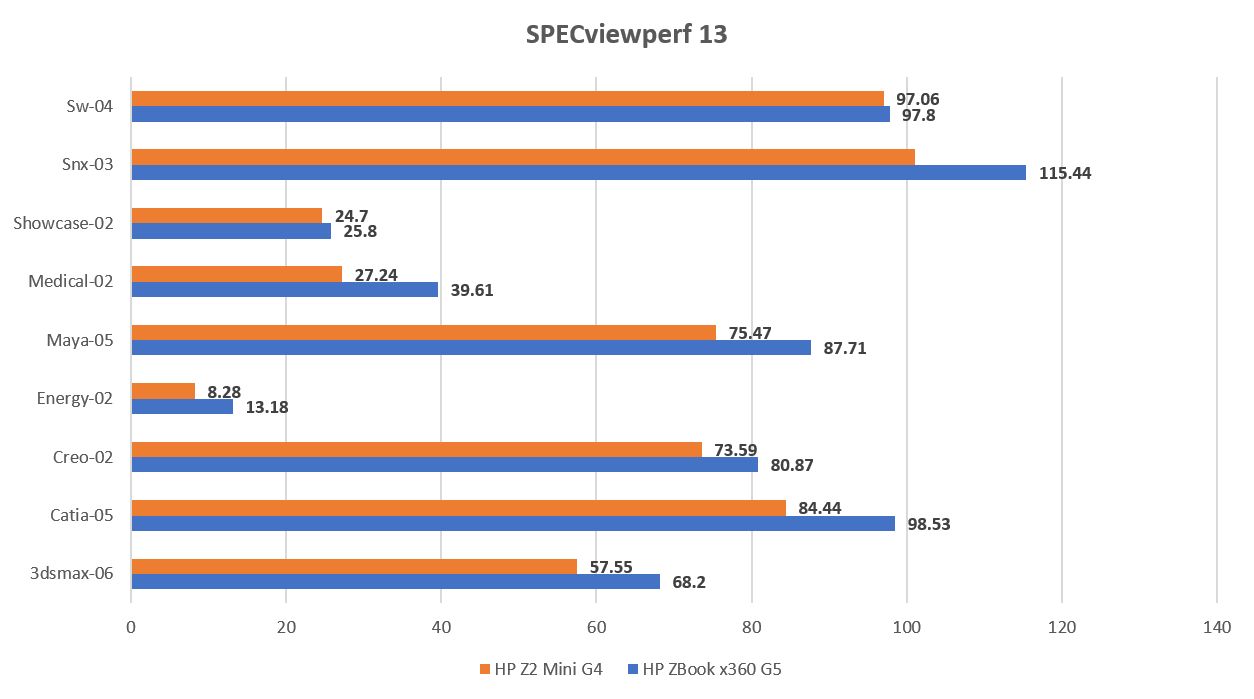 In SPECviewperf 13, 3D performance was pretty good even for an entry-level Quadro P1000 GPU (which is the highest-end Quadro available for the Z2 Mini G4), when compared to the ZBook x360 G5 that is powered by a more power Quadro P2000 GPU. In saying that, if you do want to get more 3D performance out of this tiny machine, you could potentially plug in an external GPU that connects over Thunderbolt 3.0 and obviously a more powerful GPU slotted in will push up the frame rates. 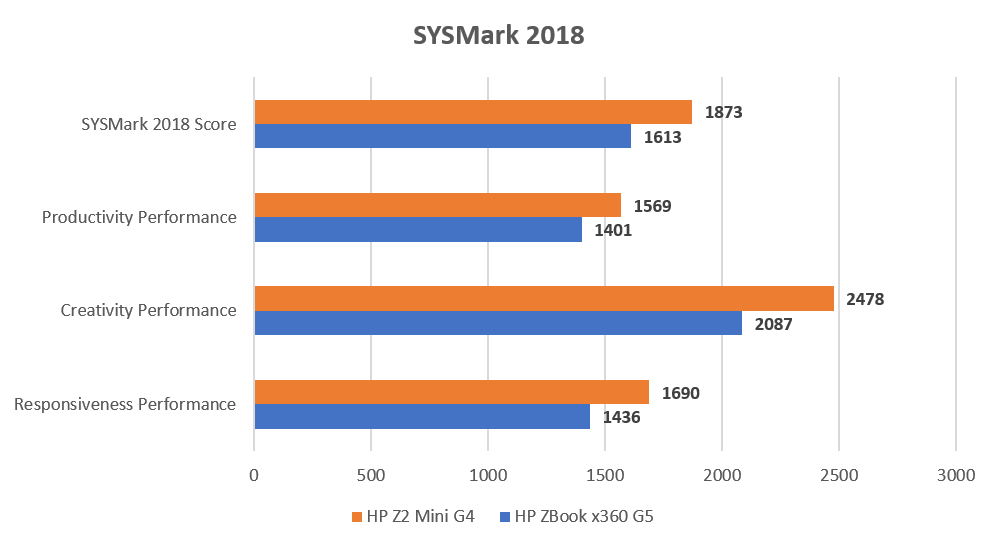 In our SYSMark 2018 tests, an application-based benchmark that reflects usage patterns of business users in the areas of Productivity, Creativity and Responsiveness. Unlike synthetic benchmarks, SYSMark runs real world applications and workloads in real-time to measure the computer’s performance, and comparing it with the HP Zbook x360 G5 that comes with an Intel Core i7-8850H CPU clocked at 2.6GHz, the scores here were falling in line with the chipsets used – with the Z2 Mini edging out the laptop on all scores. That said, and even though the mini workstation is plenty powerful on CPU-intensive tasks, it's not a substitute for a full-size desktop workstation.

The HP Z2 Mini G4 also offers decent connectivity options, and a stylish metal design that makes the Z2 Mini G4 looks great anywhere you set it up. Our only beef with it is that it simply doesn't have enough room to offer the truly powerful workstation components of a full-size desktop workstation like the HP Z8 G4, for example. 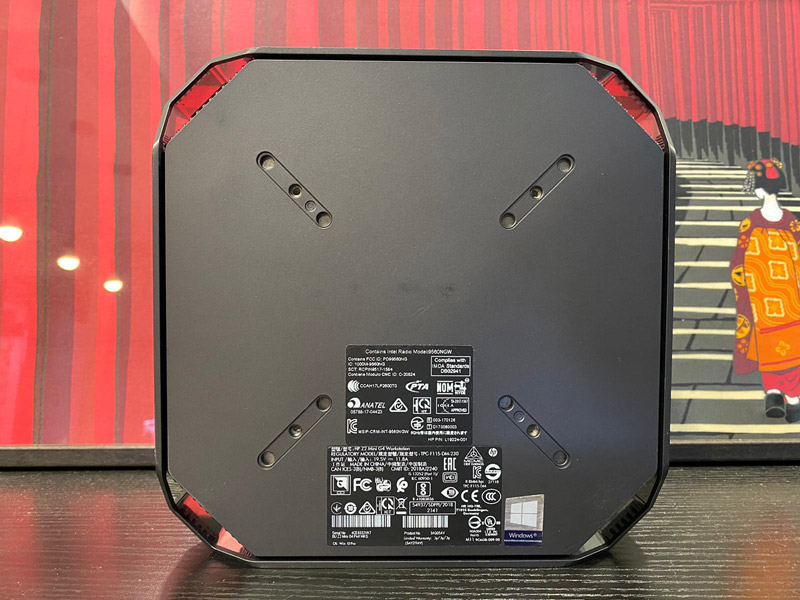 But as a mini workstation, the HP Z2 Mini G4 is a fantastic solution if you’re looking for a compact solution – limited desk space, requires portability, etc. Here’s the thing; Compact workstations just aren't that common, and its closest alternatives are the likes of all-in-ones such as the HP Z1 workstation or the Apple iMac Pro. But even Z2 Mini G4 with a high-end configuration (for example, with a Xeon processor instead) is still a far cheaper solution than either of those two machines – even when you factor in the cost of a monitor.