Hands-on with the HP Spectre, a laptop that merges consumer electronics and high fashion

Hands-on with the HP Spectre, a laptop that merges consumer electronics and high fashion 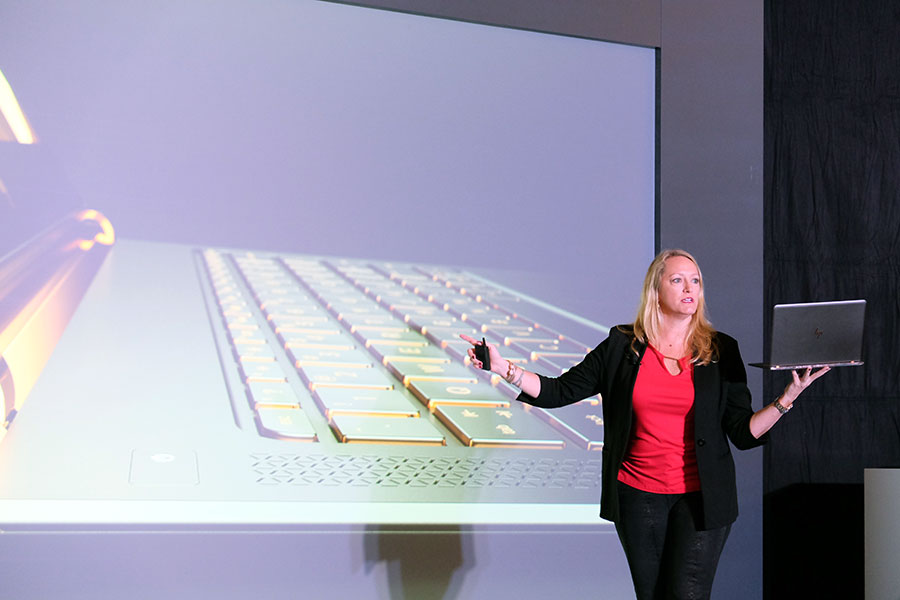 Let’s face it. The consumer PC market is so competitive and saturated that it has become quite difficult to be impressed by new product launches that usually offer more of the same. There’s simply a limit to how far you can be intrigued by new processors and iterative design improvements that just shave millimeters and grams off the previous year's model.

And then something like the HP Spectre comes along. At a mere 10.4mm thick, this is quite possibly the world’s thinnest notebook. In fact, it’s even slimmer than Apple’s 2015 MacBook, which measures a svelte 13.2mm. 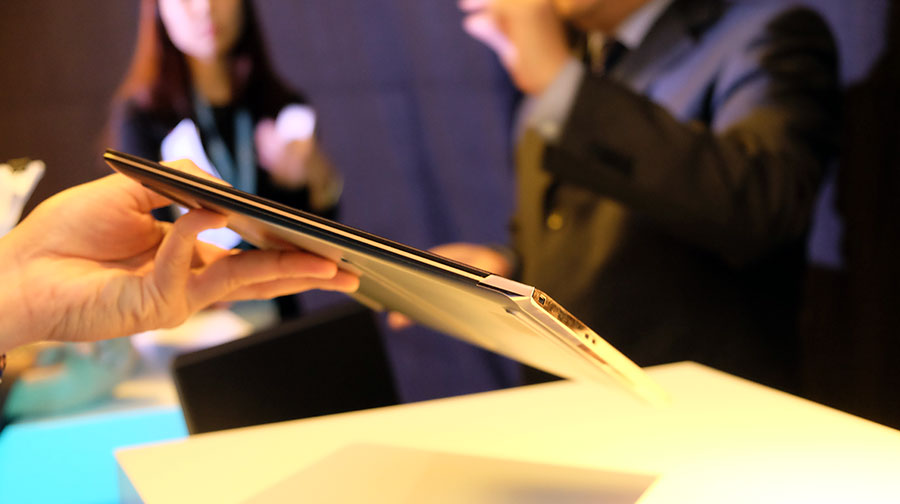 But that’s not even the whole reason why we’re impressed. The Spectre stands out primarily because of its luxurious – there is just no way else to describe it – design, and its commitment to offering the best possible specifications in such a thin body.

To listen to Anneliese Olson, HP’s General Manager and VP of Personal Systems Business in Asia Pacific and Japan, put it, the Spectre owes a lot to high fashion. For instance, the unique piston hinge (more on that in a bit) was inspired by jewelry, and designers from a range of industries and fields had input in the final design. The result is a CNC-machined aluminum chassis with a lightweight carbon fiber bottom. The notebook weighs only 1.11kg, and if battery life proves decent, it should make for an excellent companion while on the move. 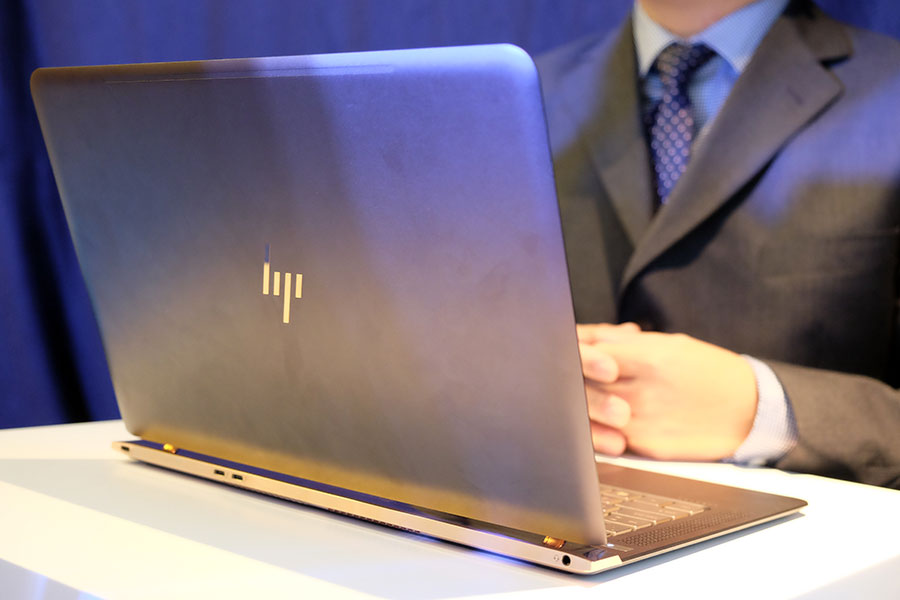 HP also pointed out subtle design details to us, like the piston-style hinge, a rose gold section at the rear, and its spanking new logo. The rose gold segment was inspired by the popularity of the color in fashion accessories, while the hinge design ensures that the mechanism isn’t actually visible when the laptop is closed, thus creating an even more seamless look. 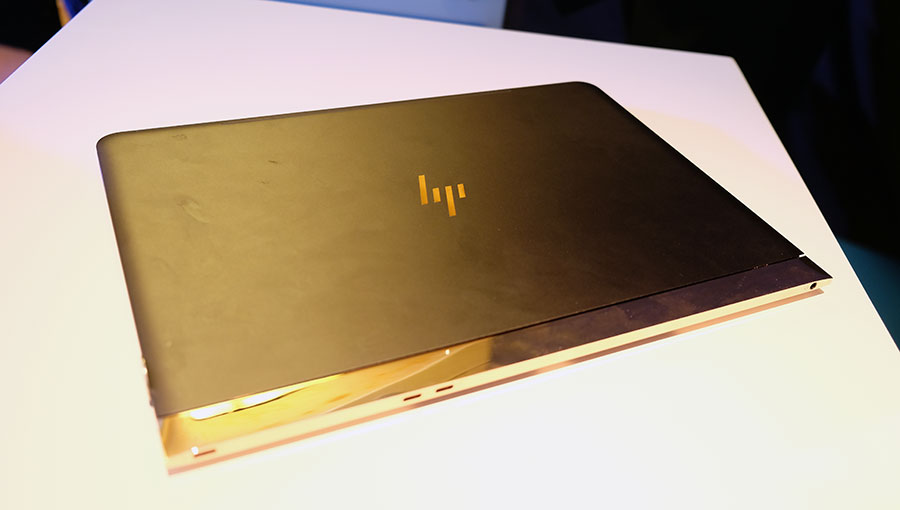 The new, minimalistic logo comprises just four utilitarian dashes that spell out the HP branding, but we were told that the spacing has been calculated such that it precisely mirrors that on the original logo. If all goes as planned, this is the logo that will be used on HP’s top-of-the-line products from this point forward.

Granted, the rose gold color isn't for everyone, and we've already caught wind of people saying that they'd be happy to use the laptop if it wasn't this color. Nevertheless, if rose gold doesn't offend you, we think that HP has hit on a very attractive formula this time.

But let’s deal with the specifications first. It can be configured with a sixth-generation Intel Core i5 or i7 processor, up to 8GB of RAM, and a speedy 512GB PCIe SSD. That’s already a pleasant surprise, given that notebooks this thin tend to feature power-sipping Core M processors because their lack of a need for active cooling allows manufacturers to create thinner designs.

To deal with the higher heat output of the Intel Core processors, HP has implemented a hyperbaric – a term that’s used to describe a gas at a pressure greater than normal – cooling system, which includes a high-pressure chamber located downstream of the processor. According to HP, the laptop doesn’t just exhaust hot air like more conventional cooling systems. Instead, two fans draw cold air through the bottom vents, pass it over the CPU and motherboard, and then exhaust it out through the gold-colored vents on the rear.

An ultra-slim design like the Spectre’s would seem to come with certain performance and port connectivity trade-offs, but HP has already put the former to rest (although we’ll have to get a review unit to see how well the cooling system actually performs).

The company also wants to ensure that it doesn’t fall prey to the complaints that followed the MacBook’s release. The MacBook’s single USB Type-C port opened it up to accusations that one port was far from enough, so HP apparently decided to go with three USB Type-C ports, two of which support Thunderbolt 3. As far as Type-C ports go, this is a little on the high side as most notebooks only feature a single such port. All three ports also support Display Port and charging via the USB Power Delivery standard.

And because of how thin it is, HP has had to locate the ports on the rear of the notebook. The Spectre deals exclusively with USB Type-C ports, and the only other port you’ll find is a headphone jack placed at the back as well. Another concern associated with ultra-thin designs is the keyboard. Not surprisingly, key travel is shallow, although not to the point of being overly unpleasant. HP put the key travel distance at 1.3mm, which is actually the same as that on the Surface Pro 4's Type Cover keyboard and the Dell XPS 13. As notebooks become even thinner, we have a feeling that keyboards of this variety are going to become the norm. 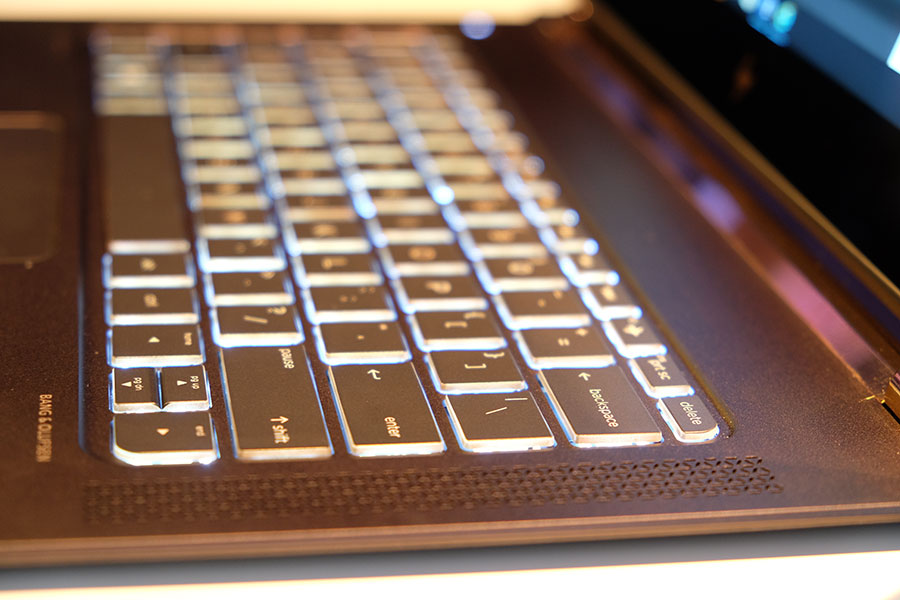 In order to fit the 38Wh battery in, HP says it split the battery into two thinner pieces – although it really looks like four pieces in pictures we’ve seen – laid out next to each other. This reportedly delivers the same wattage as a single battery and is actually similar to what Apple did with last year’s MacBook, which had a segmented battery as well. This also means that the Spectre’s battery essentially occupies the majority of the laptop’s base,

Other minor details include Bang & Olufsen-tuned speakers with HP Audio Boost technology, and a lovely triangular grate pattern on the speaker grills.

The 13.3-inch IPS display has a resolution of 1,920 x 1080 pixels. It’s covered by a sheet of Corning Gorilla glass, and HP is calling this an edge-to-edge display, even though the bezels are quite clearly not as thin as those on the Dell XPS 13. Naturally, we weren't too impressed by the display, and the best way to describe it is to perhaps simply assert that it works well enough. If we had to pick at the design, it would be that the black bezels interrupt the overall aesthetic of an otherwise luxurious and sleek laptop.

Some users will no doubt be disappointed by the modest 1080p resolution in a time of 4K displays, but we’re guessing that HP had to make some trade-offs after all because a higher resolution display would be an even greater drain on the battery (a chassis this thin does place certain limits on battery capacity). The HP Spectre will be available in Singapore in June at S$2,299.