Hands-on: Heroes of the Storm

Hands-on: Heroes of the Storm 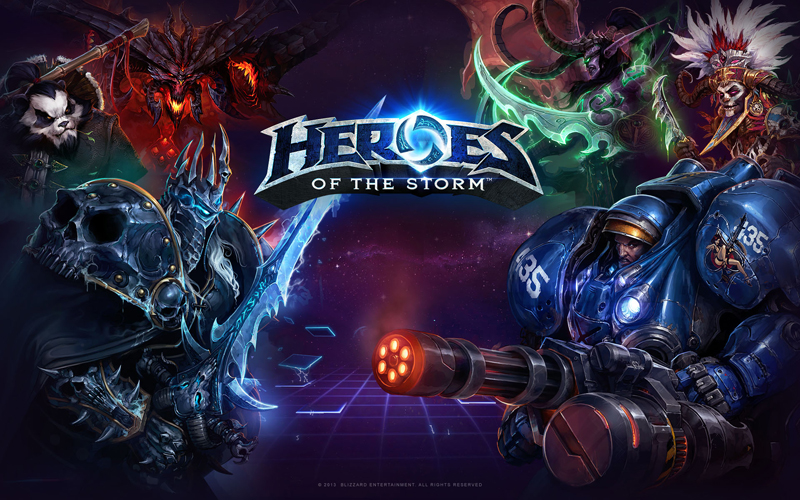 Currently in technical alpha testing, Heroes of the Storm (previously known as Blizzard All Stars) is Blizzard's newest franchise, a free-to-play MOBA (or ARTS if you prefer) in the style of DotA and League of Legends featuring an all-star cast from the Diablo, Starcraft and Warcraft universes. Unfortunately, Blizzard has yet to announce an open beta or release date for the game, but we were lucky enough to be invited to a hands-on session.

For the uninitiated, a quick intro into the world of MOBAs. Before the genre had a name, there was only Defense of the Ancients (DotA), a mod of Warcraft III, which gained attention for its quick-paced action play. Unlike a traditional RTS where players gathered resources and built units, in DotA each player controlled just a single hero unit, which could be leveled up and equipped with powerful items. The objective of the game was to destroy the opponents' Ancient, a heavily guarded structure on the opposite side of the map. Following the success of DotA, a few new games quickly entered the market, including League of Legends and the Valve-created DotA 2. While the genre had previously been referred to simply as 'DotA' a more appropriate title was now needed. Two competing acronyms seemed to gain popularity:  MOBA, or Multiplayer Online Battle Arena, and the Gabe Newell-championed ARTS, or Action Real Time Strategy (owing to the genre's RTS roots as a mod of Warcraft III). For the most part, MOBA seems to have won out, although interestingly, Blizzard has not been using that term for Heroes of the Storm, preferring instead "Hero Brawler".

It's not surprising that Blizzard would want to make a DotA-style game, considering the global success of the MOBA genre, and the fact that the original DotA scenario began life as a mod created on Blizzard's own Warcraft III world editor. But Blizzard isn't the type to just recreate DotA or League of Legends and call it a day. In fact, other than keeping to the same core objective of destroying the enemy's base, Heroes of the Storm doesn't have much in common with either DotA or LoL at all. And you know what, that's actually a good thing.

Live and Die as a Team

Heroes of the Storm pits two teams of five against each other each aiming to destroying the enemy's fortress. Rather than individual hero levels, experience is shared and distributed across the entire team, meaning you can't race ahead or fall behind the rest of your allies. This gives newer players an easier time picking up the game as they can follow their teammates around, learning the ropes and still level up and be a contributing factor. It also means that teamwork is crucial - one player suicide charging into the enemy several times will just end up leveling up the entire opposing team, which can quickly snowball into a very one-sided contest. 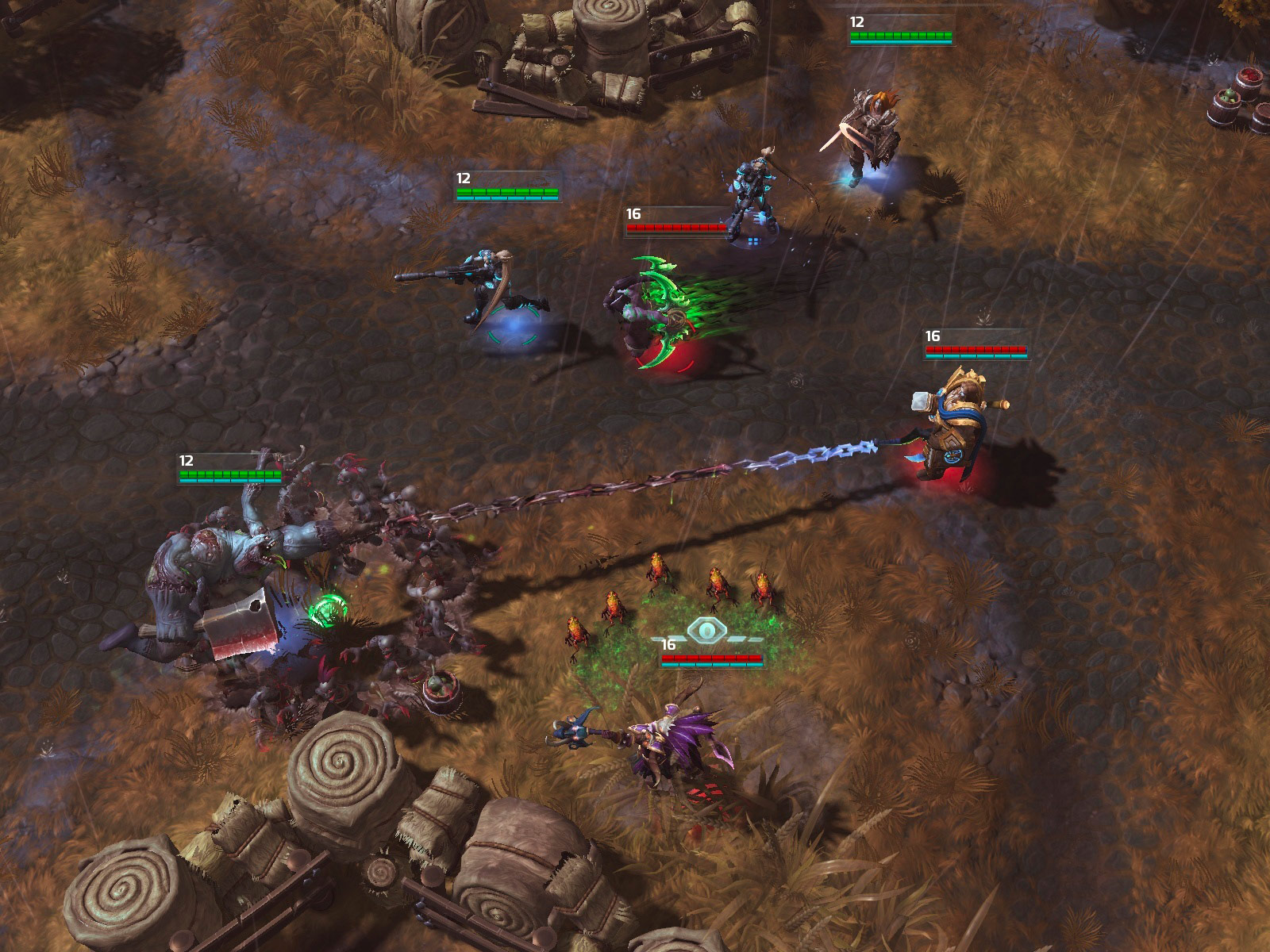 There's no gold to worry about and no vendor to buy items from. In fact, the only character advancement in-game is from selecting new talents and abilities at various levels. As a result, the action tends to be quicker to get going, with heroes immediately diving into the fray rather than grinding on minions to earn enough gold to buy their basic starting items. In fact, games on a whole tend to be much faster, with most averaging about 15-20 minutes.

Right now there are 23 heroes available to play, with 13 more due to be added shortly. The list of heroes is a greatest hits selection from Blizzard's three franchises and finally offers fans the chance to pit the likes of Raynor and Kerrigan against Arthas and Diablo. Having said that, some picks do seem a bit off. I mean, how many people actually know who Gazlowe is? (Answer: he's the goblin boss of Ratchet, a neutral settlement located in Eastern Barrens in Warcraft). A rotating roster of six heroes is available to play for free each week, while the rest of the cast have to be unlocked with in game currency (gold), which is earned after each game by completing achievements, or bought with cash in the in-game store.

Each hero falls into one of four subcategories: Assassin, Warrior, Support and Specialist, although you can basically think of them as DPS (both melee and ranged), Tank, Healer and Other. The Specialist category is the most interesting as it includes heroes that play quite differently from the rest of the cast. Sgt. Hammer, for example, is essentially a Terran Siege Tank from Starcraft II, and can be played as a ranged DPS if you prefer, but her real strength is that she's the best hero in the game for long-ranged structure damage thanks to her Siege Mode ability. 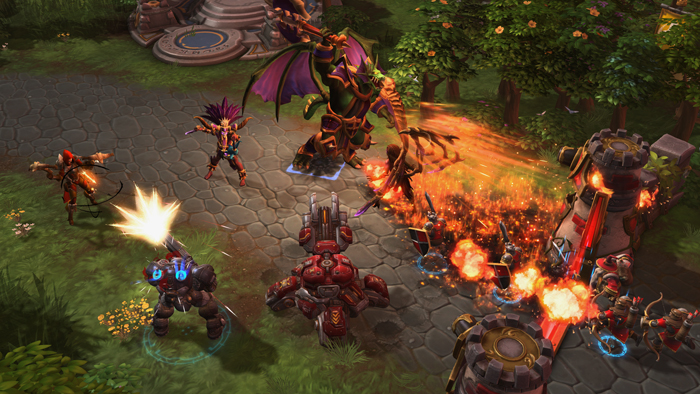 The most intriguing specialist is probably Zerg evolutionist Abathur, who is pretty much completely useless at attacking enemy players directly - he also falls over if you so much as look at him. But Abathur's strengths lie in buffing other players and causing chaos with his ability to spawn a swarm of supporting locust minions out of the ground. His ultimate ability lets him clone an allied hero and use their ultimate ability - knowing the strengths and weaknesses of the rest of your team's classes is vital to using Abathur effectively. He's a character that couldn't exist without HotS's shared experience mechanic, but in the right hands can completely change the flow and outcome of a game.

At the start of the game, and again upon hitting various levels, players are given the option to select a talent choice - most are passive upgrades or ability modifiers and offer the chance to specialize your hero. You can even steer your hero towards a different role, for example, warrior classes can opt for improved defense traits or pick increased damage skills to function more as a hybrid tank/dps. Each hero also gets to choose one of two ultimate abilities upon hitting level 10. You can only choose one ultimate, and there are no talent resets, so you'll be stuck with it for the rest of the game.

Along with their own individual abilities, all heroes have access to a mount, which lets you travel faster (but is automatically dismissed upon entering combat) and a hearthstone, which lets you teleport back to your home base. Strangely, the mounts are not hero appropriate as everyone starts off on a brown horse, resulting in some quite comical pairings. Poor Diablo's tiny horse looks ready to collapse under the Prime Evil's gargantuan bulk. 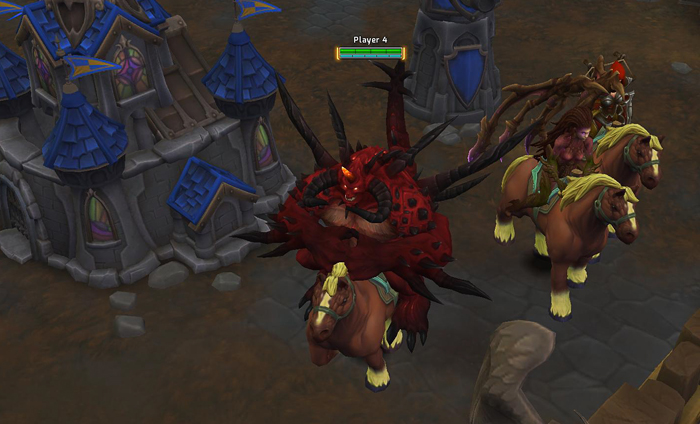 If a horse isn't your thing, the in-game store also has other mounts, including a rainbow unicorn that we saw listed for the hefty price of US$19.99. 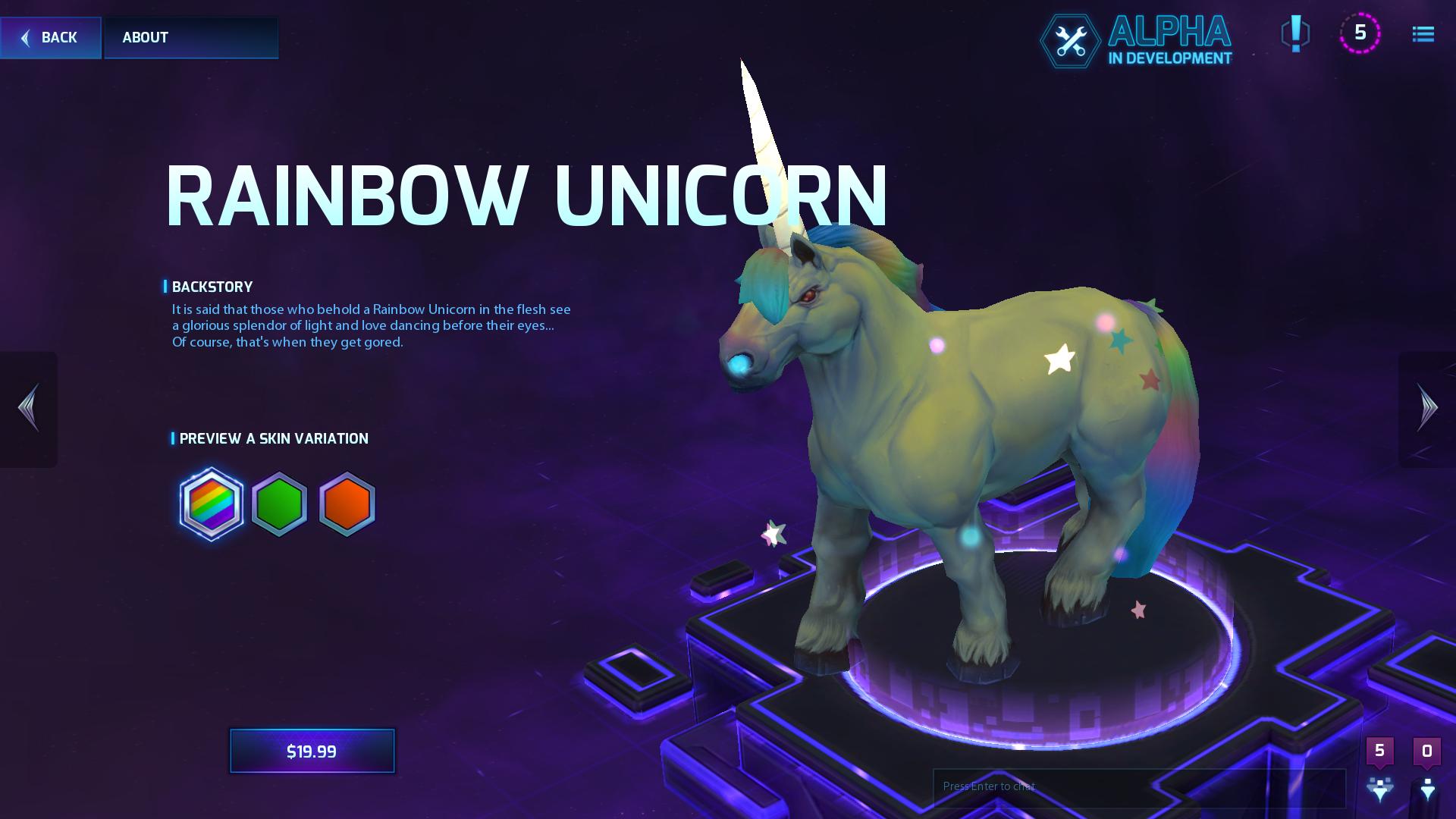 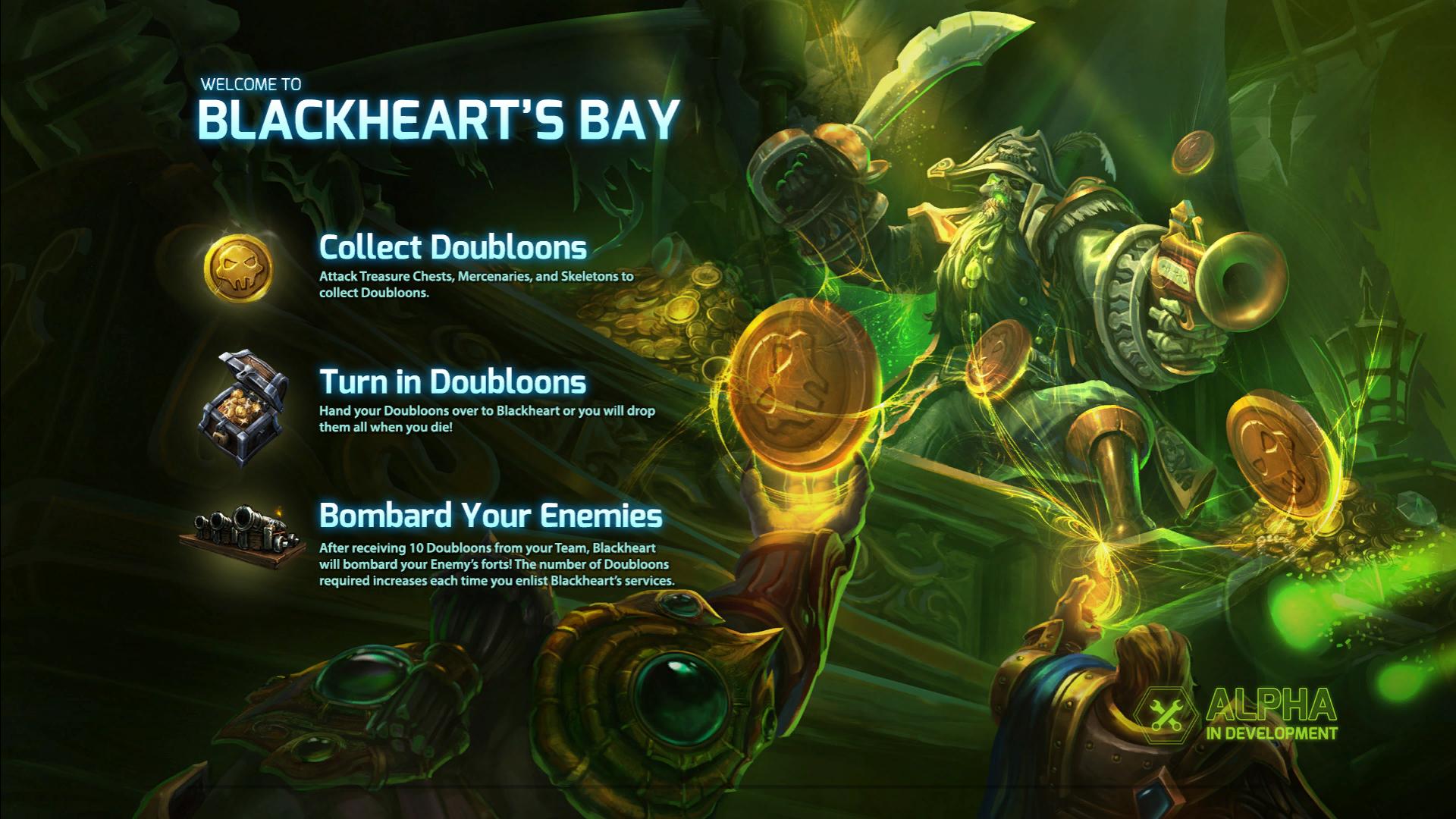 Heroes of the Storm is all about map objectives. Ignoring the objective and trying to rush your way into the enemy fortress is a sure-fire way to level up the opposing team. Four maps are currently available - Dragon Shire, Blackheart's Bay, Haunted Mines, and Cursed Hollow - each with their own objective. For example, in Dragon Shire, capturing and holding both the Sun and Moon shrines will summon the powerful Dragon Knight to fight for your team. Objectives respawn fairly frequently and the map announcer will tell all players when the objective is going to spawn, as well as its location(s). As a result, there's a nice rhythm to each game as it goes between traditional phases of offensive push and defensive retreat, to all-out battle royales over the all-important objective. 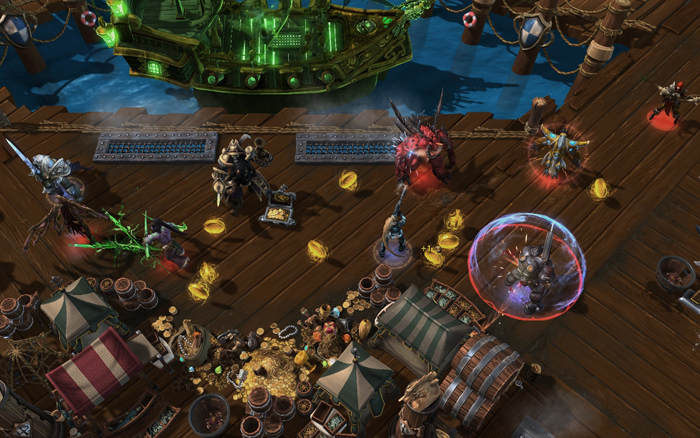 To make objectives even more important, each team's base is guarded by a number of towers armed with cannons that can quickly slaughter even a high level hero. Each tower also has a gate that completely stops the opposing team from crossing it unless first destroyed. As a result, you can't really chase down an enemy hero retreating into the safety of his own base. Certain objectives however will give you a massive advantage against the opposing team's defenses - for example, in the Cursed Hollow map, collecting three tributes will inflict the Raven Curse on the enemy team, which will neutralize all enemy towers and reduce all enemy minions to 1HP for one minute, providing your team a window of opportunity to rush the enemy base. 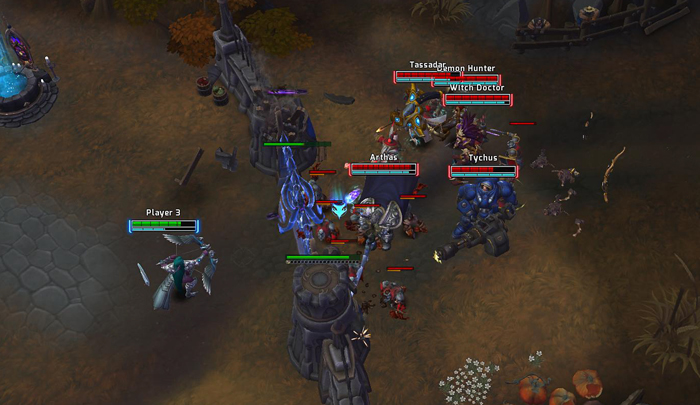 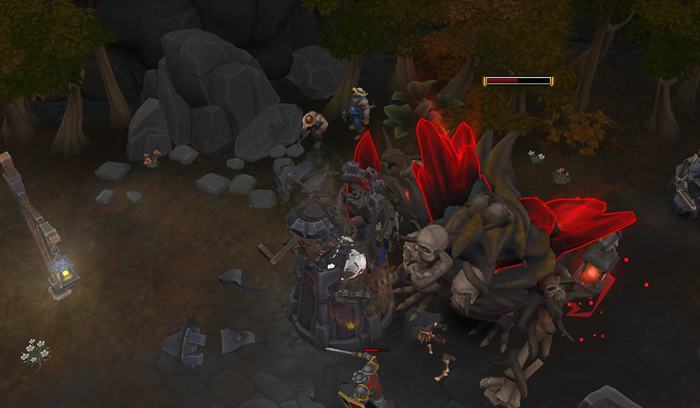 Along with map objectives, scattered around the map are mercenary camps. Defeating the camps will secure the mercenaries' loyalties, letting them fight for your side. Some mercenaries are very powerful, and can easily swing the game in your favor. Overall, controlling the map is far more important in HotS than other MOBAs, and the momentum swing provided by capturing the objective far outweighs any individual player kills. 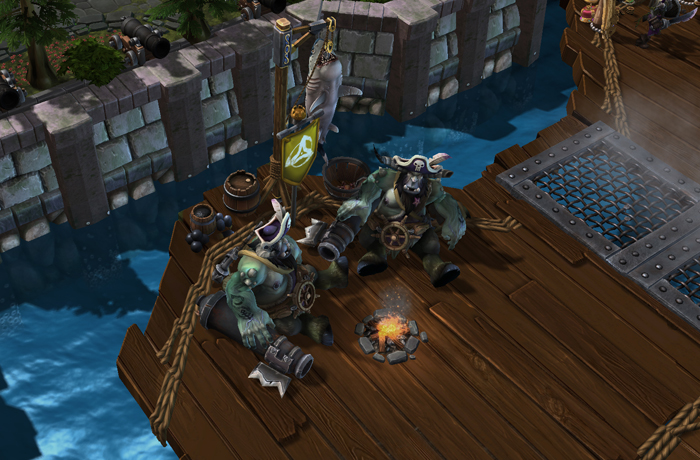 The maps themselves are well thought out, and suit their objectives quite nicely. Dragon Shire and Cursed Hollow are all about controlling certain parts of the map at the right time and, as a result, are larger and more complex maps. Blackheart's Bay and Haunted Mines require you to collect more resources around the map than your opponent and are therefore smaller, with more tunnels and narrow pathways to funnel you into conflict.

If there's one downside to the importance of map objectives it's that it might be impossible to win without good communication. While this may seem like a good thing, jumping into a random matchmaking party online could be a lesson in frustration. The chat window is small and other than pinging the map there's not much else you can do to share strategy with your team. Voice communication is almost a must-have, and pretty much any pre-made team with decent communication will steamroll a random group that can only communicate via text. World of Warcraft does have its own in-game voice communication, but hardly anyone uses it thanks to the popularity of Ventrilo and TeamSpeak - still, it might be time for Blizzard to have another look at in-game voice communication for HotS.

Overall, HotS feels very different from DotA and LoL. People have been calling it casual friendly, and it's certainly easier for new players to get into, but we wouldn't necessarily call it a casual game. There's just as much, if not more, strategy involved in using your hero correctly, and some heroes like Abathur require an entirely different playstyle to anything we've seen in DotA or LoL. Games tend to be shorter due to map objectives funneling players into combat, but we loved that its almost always possible for a losing team to quickly regain the advantage with a big momentum swing upon capturing a crucial objective. 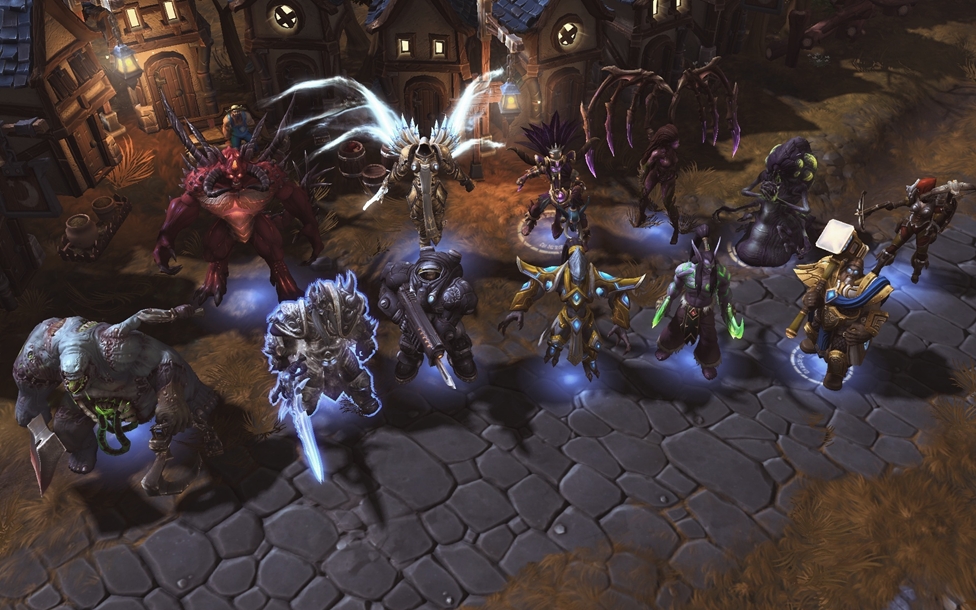 If there's one thing that needs to improve, it's in-game communication. With so much emphasis put on teamwork, there's a definite lack of tools provided to facilitate that teamwork. At its best, Heroes of the Storm is a frantic battle of ebb and flow, pitting Blizzard's best characters against each other in a team-based, strategic conflict. At its worse, it's a bunch of strangers charging headlong into each repeatedly until someone accidentally captures an objective and the ensuing NPC destroys the opposing team's base.