Hearthstone is a free-to-play online game (Blizzard's first F2P) with a micro-transaction shop. The game is a collectible card game (CCG) set in the Warcraft universe where two heroes battle each other with minions, spells and weapons. It has many similarities to Magic: The Gathering. The game is currently in closed beta with a possible release date later this year (but knowing Blizzard, that date could easily be pushed to 2014). There are currently over 300 cards in the game.

The heroes in the game are all famous figures from Warcraft lore (although some might question if Anduin Wrynn is really more famous than Tyrande as the Priest class representative) and based on the original nine World of Warcraft classes (so no Monks or Death Knights yet): Malfurion Stormrage (Druid), Rexxar (Hunter), Jaina Proudmoore (Mage), Uther the Lightbringer (Paladin), Anduin Wrynn (Priest - surprisingly not Tyrande), Valeera Sanguinar (Rogue), Thrall (Shaman), Guldan (Warlock), and Garrosh Hellscream (Warrior). 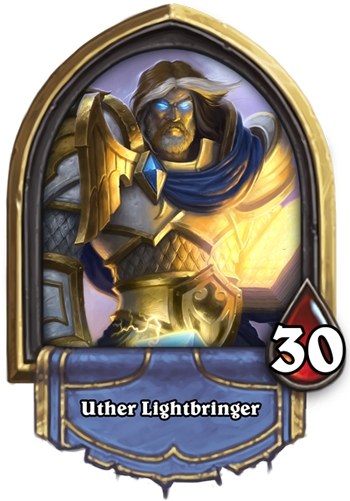 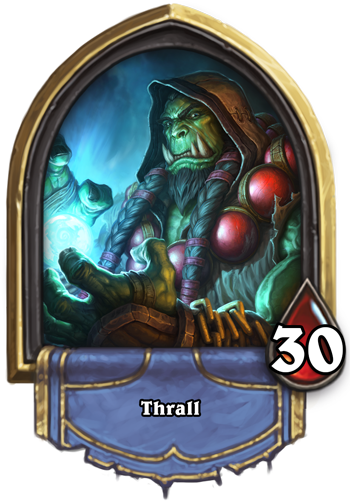 The aim of the game is to reduce your opponents life total from 30 to 0. You can do this by attacking him directly with your minions or through spells, or even by equipping a weapon and attacking him with your own hero. 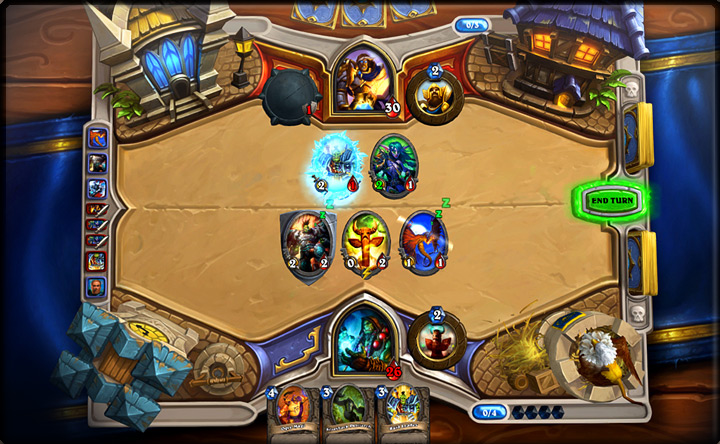 At the start of the game, each player draws three cards. You can replace any of these cards once if you're not happy with them. At the beginning of each subsequent round, each player also draws an additional card. The game randomly determines who goes first. The player who goes second gets to draw an extra card and also gets a free card called 'The Coin'. This card can be used at any time and generates 1 extra mana for that round instantly. Right now, the two benefits received for going second seem a bit too powerful, as you'll often find yourself passing on round 1 as the first player (since you only have 1 mana to spend).

Each card has a casting cost, this is represented by a mana value represented by a blue crystal with a number in it at the top left corner of the card. Mana is generated each turn and you get +1 mana with each turn up to a maximum of ten, i.e. you start round 1 with one mana, and round 2 with two mana. We liked the mana generation mechanic as it prevents the dreaded 'mana starved or mana flood' that can plague some Magic: The Gathering games. We also like the +1 mana per turn mechanic as it gives the game a natural ramp up, with bigger and bigger minions coming out in later turns.

The most prevalent type of card in most decks will be Minions. These are creatures summoned onto the battlefield. Each minion has a yellow attack value (bottom left) and a red HP value (bottom right) that determines how much damage it deals when it attacks and blocks, and how much damage it can take, respectively. Minions summoned into play cannot attack in the round they are summoned in (similar to summoning sickness from Magic: The Gathering). 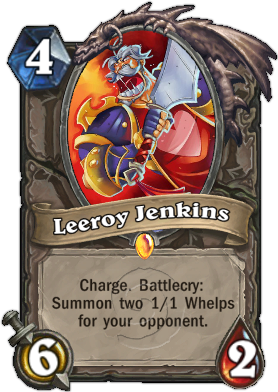 When a minion is eligible to attack, you can select who that minion attacks: an opponent's minions or the opponent's hero directly. If attacking an opposing minion each minion deals damage equal to their attack score. If a minion takes equal to or more damage than its HP score it will die and be removed from the battlefield. Note that, unlike most other card games, damage inflicted to a minion permanently reduces its HP score (unless healed through a spell or other ability).

Some minions have special abilities. For example, the Taunt ability forces any attacks to be made against that minion (useful for soaking damage and protecting your other minions or your hero).

Spells are fairly simple to play and have immediate effects, for example, Fireball costs 5 mana to play and deals 6 damage to a minion or opposing hero. All spells are accompanied by a nice visual animation similar to how they look in World of Warcraft. 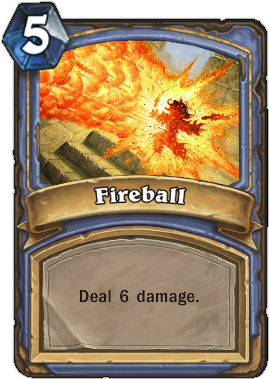 Weapons can be equipped by your heroes and let your hero personally attack minions or the opposing hero. Each weapon has an attack value (bottom left) and a durability value (bottom right). Note that Heroes attacking minions will also take damage to their life equal to the blocking minion's attack power. Weapons also lose 1 durability with every attack, when a weapon reaches 0 durability it is destroyed. Some weapons also have special effects on the game. 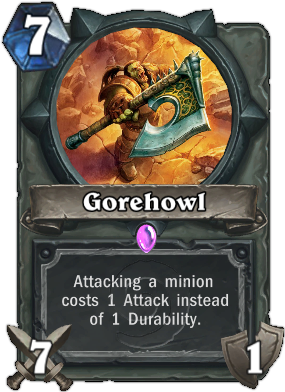 In our brief hands on, games seemed to take about ten to fifteen minutes to play.

Our initial thoughts after playing the game were that some hero abilities seem more useful than others. For example, Jaina's fireball ability deals 1 damage to any minion or the opposing hero, which isn't bad, but costs 2 manas to do so, which is quite expensive. On the other hand, Thrall's summon totem ability summons a random totem that remains on the battlefield - one totem continuously heals your minions, which is very powerful.

Unusual for a card game, you cannot actually trade cards to other players. Instead, any unwanted spare cards can be disenchanted (destroyed) and turned into Arcane Dust. Arcane Dust can then be used to 'craft' other cards in the game. We weren't given much specifics for how the crafting system works but according to Blizzard, every single card in the game, including Legendary quality cards, can be crafted through the crafting system. 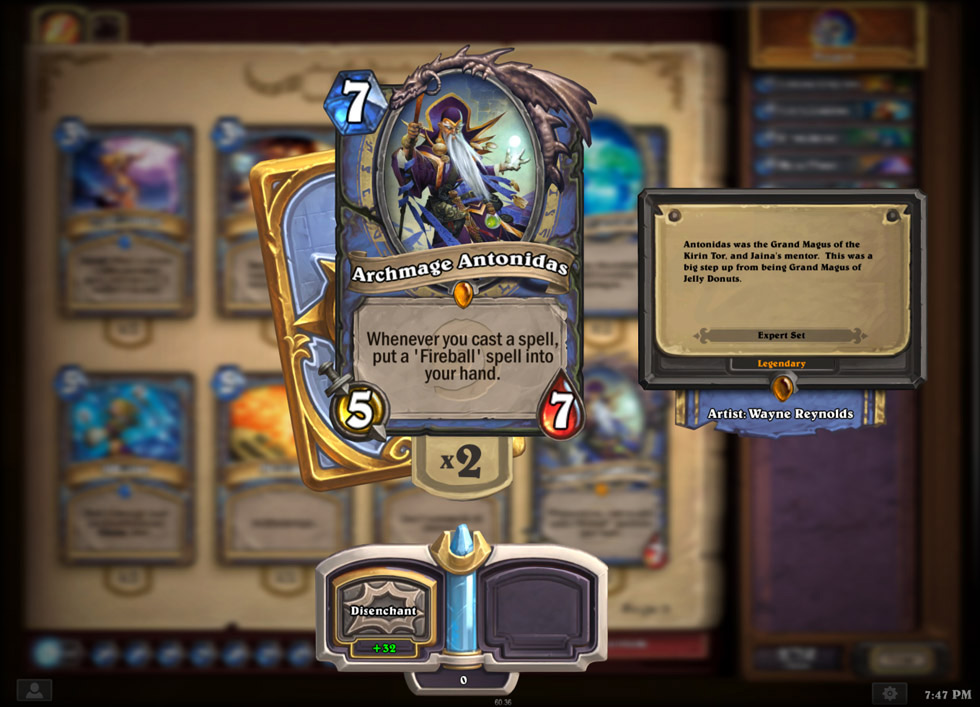 Practice Mode lets you fight against various AI opponents. You can also select Expert AI for a more difficult challenge.

Play Mode is the standard mode and lets you battle your bnet friends in 1 vs 1 duels or find an opponent through bnet matchmaking. 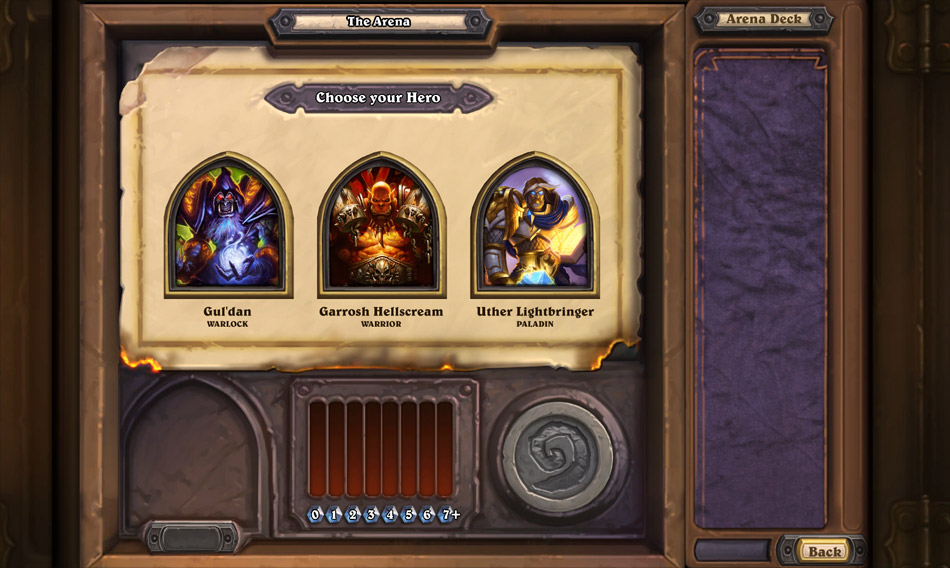 Blizzard Director of Publishing and Operations SEA, Alan Chou, detailed some of the plans for Hearthstone once the game goes live. Chou mentioned that Blizzard feels Hearthstone will make a very good spectator sport as it includes a random factor (which cards are drawn) that adds drama to the game - something not seen in Starcraft II or World of Warcraft Arena.

Plans for SEA include cash prize tournaments in Singapore and the surrounding region.

Hearthstone will be available for PC and Mac at launch, with an iPad version to follow. All games will be cross-platform. As for Android, Blizzard states that they're "looking into the possibility of supporting additional platforms in the future, but don’t have any further info to share at this time." The game will not be playable on iPhone.

Hearthstone is a radical departure from Blizzard's other games, but it certainly looks to have the same level of polish and depth that the company is famous for. Whether it will become as popular as Blizzard's other titles remains to be seen, but it's helped by an easy learning curve (something that can't be said of competitive Starcraft II play) that should let even gamers that have never touched a CCG or TCG pick it up in just a few minutes.

As for whether it will find success on the competitive gaming circuit, while it may lack some of the complexities of a few other CCGs like Game of Thrones (or even some of the newer Magic: The Gathering cycles), the base mechanics are solid and high level play will certainly require plenty of strategy. Blizzard has lots of experience with competitive balancing from both World of Warcraft and Starcraft, and we trust that they'll do a good job with Hearthstone as well.