Hands-on with the Google Pixel 2 and Pixel 2 XL

Hands-on with the Google Pixel 2 and Pixel 2 XL 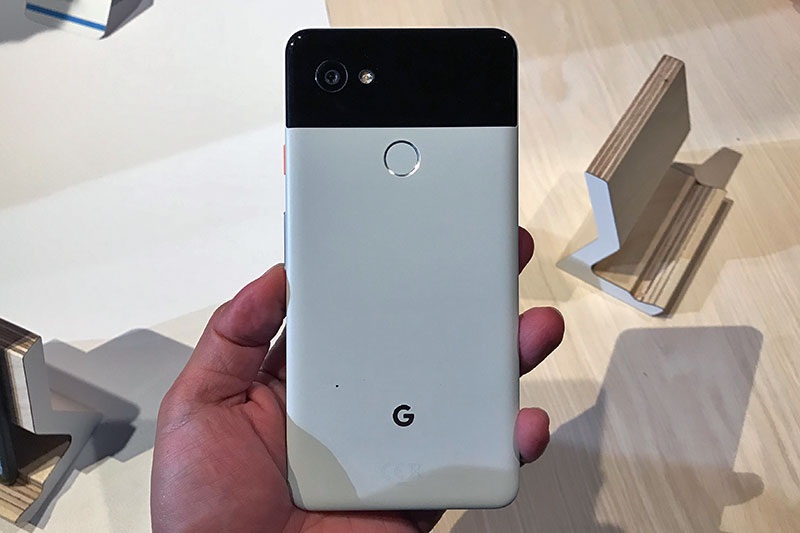 Version 2 of the "Google Phone"

Legend has it that if you want to experience Google’s take on Android, one untainted by OEMs’ cruft, you’ve to turn to the “Google Phones”. Well, here they are: the newly christened Pixel 2 and Pixel 2 XL. And this time, one of them - the Pixel 2 XL - is crossing the Pacific Ocean to come to Singapore.

The Pixel 2 phones share many components between their aluminum-and-glass enclosures. Both are powered by Qualcomm’s Snapdragon 835 SoC, with 4GB RAM, and up to 128GB of internal storage. While this is pretty much par for the course for flagship Android phones these days, both phones have kept to a single 12-megapixel camera as their main camera and an 8-megapixel front-facing camera. Unfortunately, both phones don't support expandable storage. 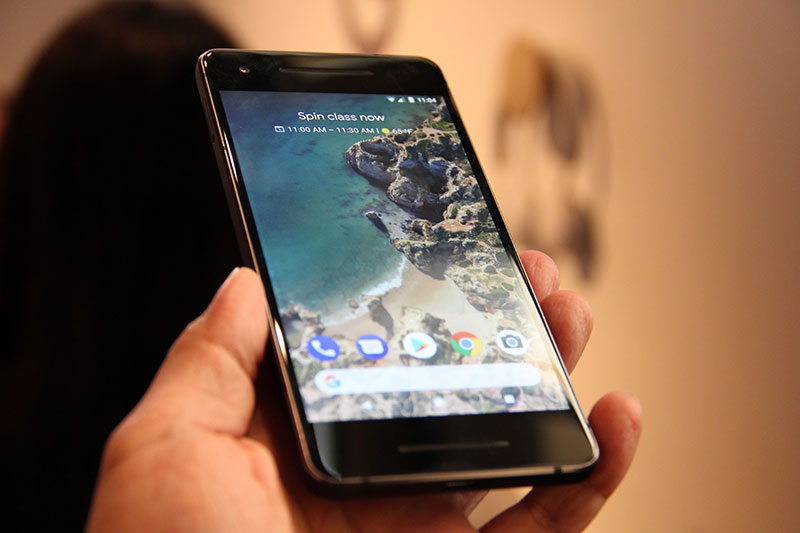 The allegedly HTC-made Pixel 2 is undeniably the easier model to deal with one-handed. The left and right bezels seem to be about the same size as its predecessor, and sadly, its top and bottom bezels are no better. One saving grace is the presence of front-facing stereo speakers, which should work well with the new Daydream View VR headset, so we can at least console ourselves that the sizeable forehead and chin are there for a good reason. And for what it’s worth, these speakers actually make the Pixel 2 look less like an iPhone, a common knock people had with the 2016 Pixel.

The Pixel 2’s smaller size also makes the phone’s squeeze function easier to activate. Called “Active Edge”, you can grab the lower half of the phones and give their frame a squeeze to quickly bring up Google Assistant or silence incoming calls. The squeeze force level can be configured, and the frame will acknowledge the squeeze action with a haptic feedback. Unlike the HTC U11’s Edge Sense though, you can’t use Active Edge to open the Camera app (pro-tip: double-press the power button). Now, I’m not willing to call Active Edge a gimmick just yet because I think it has the potential to be very useful, even if it’s a one-trick pony. For example, I can totally see myself squeezing the phone to turn on the flashlight in the dark - that is, if and when Google is ready to give more apps access to the feature. 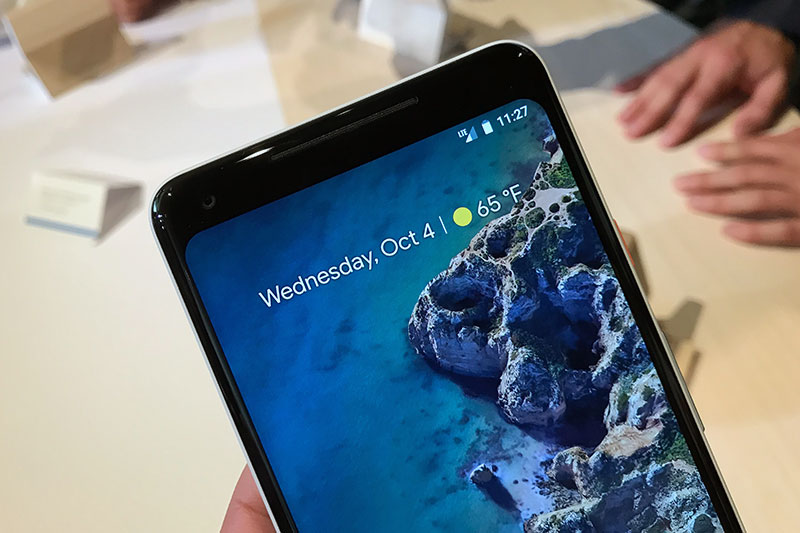 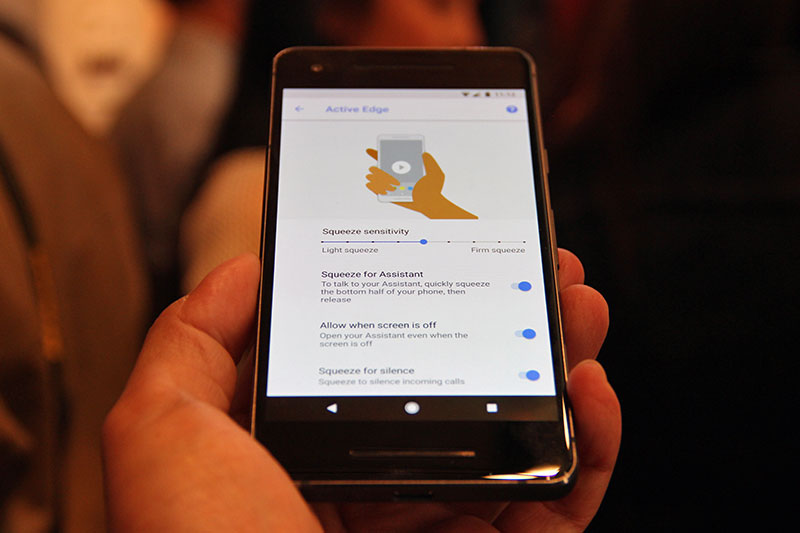 Without question, the Pixel 2 XL is the one that makes the bigger physical stride. Reportedly made by LG, it gains admission into the tall screen club with its 6-inch display with an 18:9 aspect ratio and rounded corners. Google doesn't seem too interested in joining the current all-screen, edge-to-edge display race, because boy, like the Pixel 2, the Pixel 2 XL is proud of its forehead and chin. The XL’s side bezels are a bit weird too, not so much because they look 3 to 4mm thick, but because the display is flat and doesn't curve on its edges like the 3D Gorilla Glass 5 overlaying it does. In short: no, the Pixel 2 XL doesn't look like the LG V30 or the Samsung Galaxy S8/S8 Plus.

The back panel of both IP67-rated phones is flat, with a piece of glass adorning a section at the top for wireless signals to pass through and for you to better orientate the phone in the hand. Unlike last year’s Pixels, this glass piece doesn’t extend past the Pixel Imprint fingerprint sensor, rendering it a smaller fingerprint/grease/whatever-gunk-you-have magnet this time round. Between the Pixel 2 XL and the iPhone 8 Plus, the Pixel 2 XL is marginally easier to handle, in large part due to the symmetry between the front and back, and whatever that coats the metal back and frame to gives them that non-slippery, slightly textural feel.

And since two materials have to be used for the back, Google might well make it stand out. And it did. I’m particularly drawn to the black/white back + neon orange power button combo, one of the two colorways available for the Pixel 2 XL. Thank goodness too Google has sensibly opted for a black front for this “panda” model. Additionally, the phones’ Ambient Display mode can now be left on all the time, which makes sense considering the power-sipping nature of OLED. There's also a Now Playing feature that can ambiently identify music. Because it relies on a locally-stored database, it even works in airplane mode! 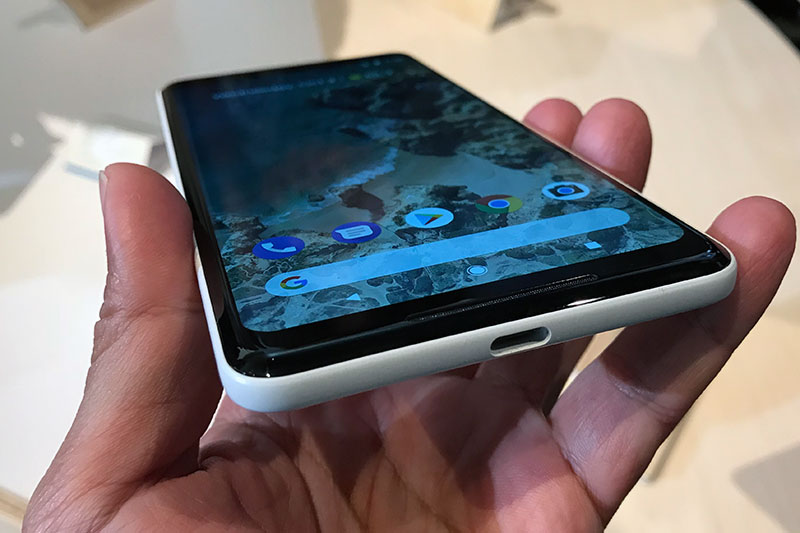 And yes: both Pixel 2 phones have ditched their 3.5mm headphone jack in favor of USB Type-C, but Google is bundling a USB-C to 3.5mm dongle. Bluetooth 5.0 support is also onboard, and both Pixel 2 phones will play nice with the new Pixel Buds' real-time translation feature.

The multi-talented USB Type-C port is also used for charging and data transfer (USB 3.1 Gen 1, so up to 5Gbps). The Pixel 2 packs a 2,700mAh battery, while the Pixel 2 XL has a 3,520mAh battery. USB Power Delivery is supported to realize fast charging, and Google says you can get up to 7 hours of use with just a 15-minute charge for both phones. 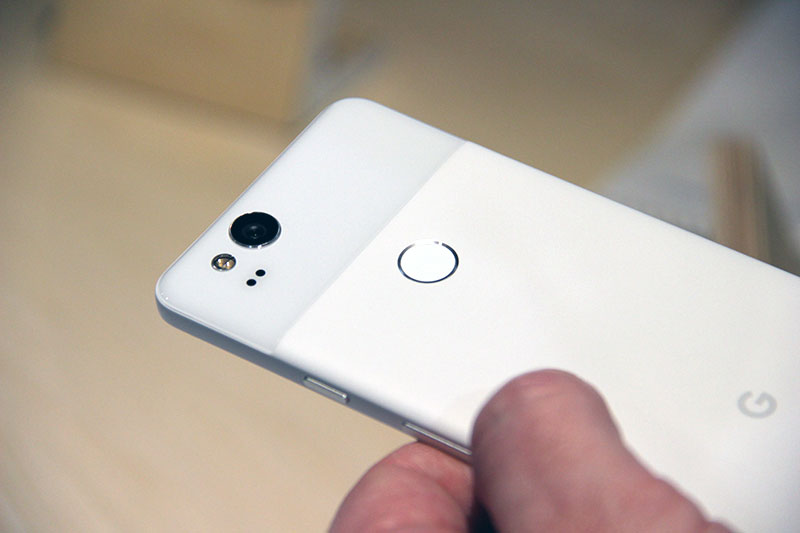 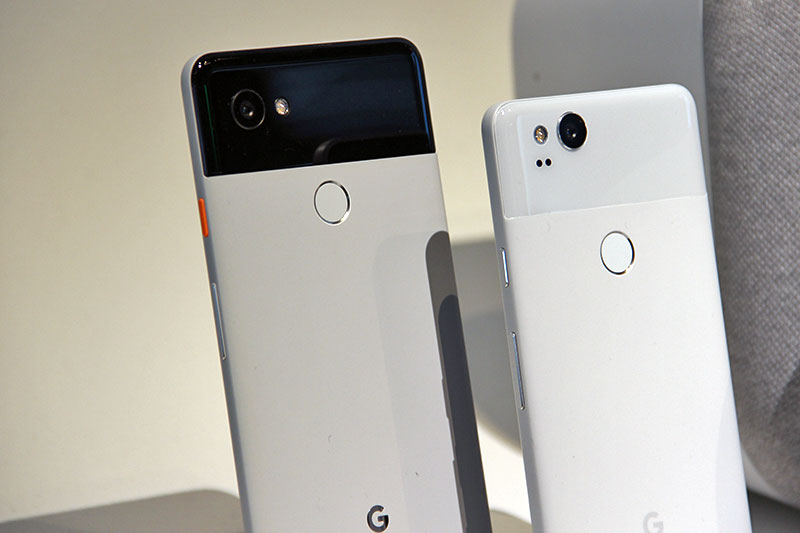 As more phone makers move to dual-camera setups to power pseudo-optical zooming and bokeh tricks, Google has stubbornly (courageously?) stuck to a single rear camera setup on both phones, though we’re looking at an upgraded 12.2MP, F1.8 module this time. And who can blame Google: the 2016 Pixel’s camera was highly rated on DxOMark and is often cited (along with unlimited, full-resolution Google Photos storage) by users as the best reason to get the phone. In fact, the French company has already tested the Pixel 2; and with a score of 98, it nows tops the DxOMark Mobile chart, ahead of the iPhone 8 Plus and Samsung Galaxy Note 8.

Obviously, we’ve to get the Pixel 2 into the lab before issuing our own verdict, but as far as hands-on goes, the Pixel 2’s camera launches quickly, exposes quickly, and shoots quickly. HDR+ mode feels slightly faster too, no doubt aided by the increased processing power. The new camera has also gained optical image stabilization, which when combined with electronic stabilization, should net you even smoother videos. This upgraded camera is likely the cause for that teeny-weeny bit of rear camera bump. 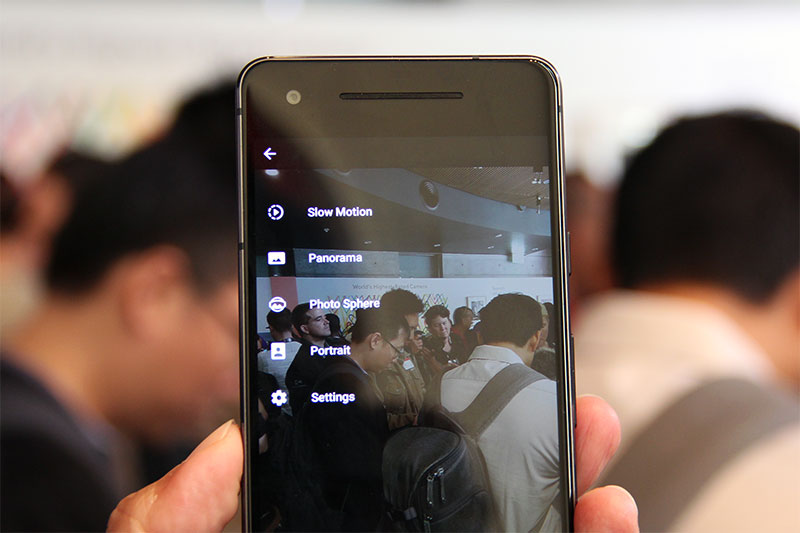 Ultimately, software is Google’s… thing. Because the single rear camera hasn't prevented Google from giving the Pixel 2 phones a Portrait mode. As you’d expect, this mode will blur the background while keeping the foreground subject in focus. The effect doesn't take long to apply, and the result is surprisingly good. If you don’t like what you see, you can always fall back to the unadulterated copy. While this is mostly software driven, Google says it has some hardware help from the rear camera's "dual-pixel sensor". Essentially, each pixel is "split" into two (left and right) to separately capture a set of lower-exposed photos to generate a depth map. As such, for the rear camera, Portrait mode also works on inanimate objects. The front-facing camera can do Portrait mode, too, but just for faces because it doesn't have this pixel-splitting superpower.

Another new photo addition is Motion Photos, which embeds a few seconds of video before and after every still shot to the file - you know, à la Apple's Live Photos.

Google Lens, first shown at this year’s Google I/O developer conference, is now baked into Google Photos. Simply tap the new Lens button for an existing photo to discover new data or get actionable options. For example, if it’s a photo of a building, you will get more info about the place; and if it’s an invitation with phone numbers and URLs, you’ll get the option to add to your address book or create a calendar event. While Google Photos is the first home to Google Lens, it won’t be its last. Google intends to bring Lens to Google Assistant at a later time, as well as other Google products in the future.

Speaking of Google Assistant, Google says support for Singapore English will arrive later this year. It’s unclear if it’ll be in time for the Pixel 2 XL’s local launch; if not, you can always use U.S. English or U.K. English for the time being.

Finally, the Pixel 2 phones run Android 8.0.0 Oreo, with its own Pixel Launcher to set it apart, UI-wise, from other Oreo handsets. The most obvious departure from last year’s Pixels is the removal of the “G” search pill on the new-look homescreen, which now has a full-width Google Search bar (rounded corners!) sandwiched between the dock of icons and navigation keys at the bottom. I’m ambivalent about this change, but for those who outright reject it, there’s always third-party launchers. As before, you can long-press the home button to summon Google Assistant, long-press the circular app icons to bring up shortcut items, swipe right to get to the Google app, and swipe up from the bottom of the screen to reveal the app drawer. And if you’re adamant about one-handed use, you can configure the phones to bring down the notification panel when you swipe down on the fingerprint scanner.

The Pixel 2 and Pixel 2 XL will go on sale on October 19 and November 15 respectively. Singapore is getting the larger Pixel 2 XL exclusively through Singtel, and you can register your interest with Singtel starting today, October 5, 9 AM SGT.

This article was first published on Oct 4, 2017 at the Made by Google event.