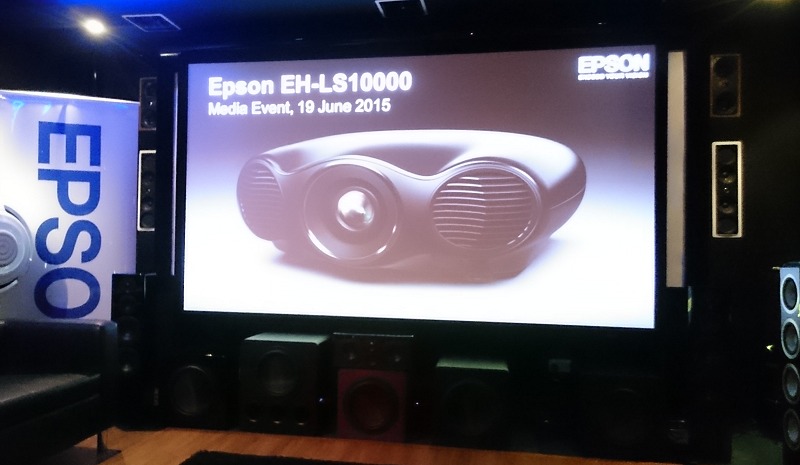 Vivid colors, sharp output and amazing black level performance is all anyone wants out of their home theater projector. And that’s probably what Epson’s engineers have delivered with the EH-LS10000 from what we experienced in our brief hands-on encounter in today’s media launch event.

Launched in the U.S. in late 2014 as Epson’s PowerLite Pro Cinema LS10000, this huge bulbous projector is now finally available to enthusiasts in Singapore for the princely sum of S$10,999. Popular local audio specialist KEC Sound System will be the exclusive launch partner for this high-end projector.

What’s it capable of? 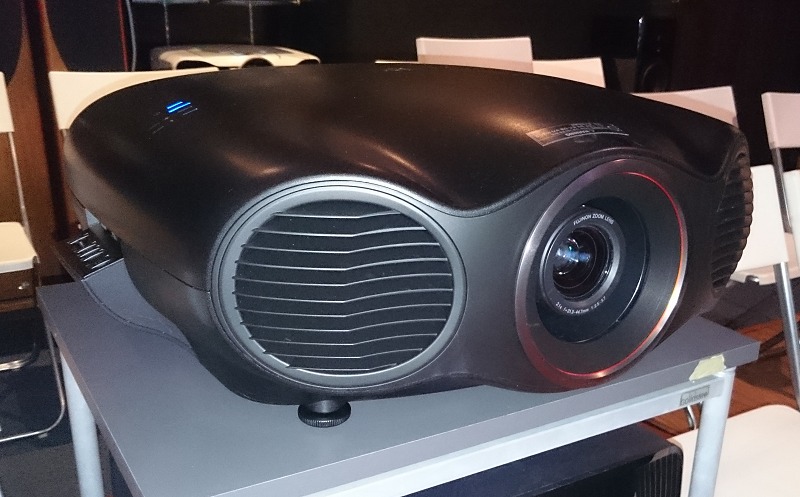 At the heart of the EH-LS10000 lies a new optical engine technology that brings about its high performance output capability. The two key elements are its dual laser light source and the use of 3LCD Reflective panels, thus making it the world’s first dual laser 3LCD Reflective home theater projector.

Instead of the usual 3LCD projection technology, Epson employs a newer 3LCD Reflective (3LCD-R) projection that uses a reflective high temperature polysilicon (Reflective HTPS) liquid crystal chip that’s capable of providing contrast ratios up to 100,000:1 or higher (depending on projector implementation). Usual 3LCD projection employs transmissive HTPS chips and according to 3LCD.com, the main difference between this and the newer reflective HTPS chips is the change from transparent to a reflective electrode along with the optimization to enable this new chip to deliver high contrast ratios. Further to that, Epson’s 3LCD-R has improved pixel density by reducing the space between individual pixels. 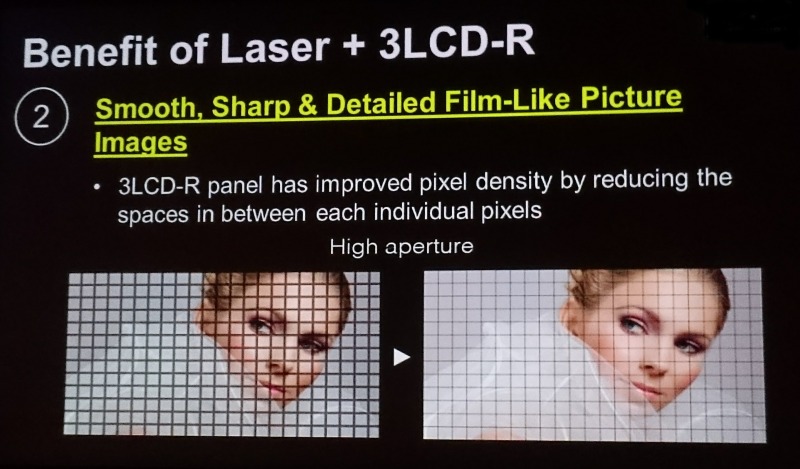 The three 0.74-inch Reflective HTPS panels each have a pixel count of 2,073,600 dots – this equates to a resolution 1,920 x 1,080 pixels resolution. That means the EH-LS10000 has a native output resolution of just Full HD resolution. That might not sound impressive for Epson’s flagship projector offering, but the projector’s processing engine does offer a super resolution mode and 4K Enhancement technology using a pixel scaling process to shift each pixel diagonally up to 0.5 pixels for twice the vertical and horizontal resolutions. As such, the projector can ‘upscale’ your Full HD content to a 4K resolution equivalent experience. Because this is all controlled via a processing engine, Epson 4K Enhancement technology is available in 5 modes (4K-1, 4K-2, 4K-3, 4K-4 and 4K-5), where we experienced an increasing level of sharpness of the image/video as we selected the higher modes. Presumably these modes control level of interpolation, edge and detail enhancement, thus putting you in control exactly how sharp you want your projection output. Should you be projecting to a larger screen and further distance, this increased sharpness comes in handy. In our trial, the 4K-2 mode seems to offer the best balance of sharpening and detail without too much perceptible image noise. 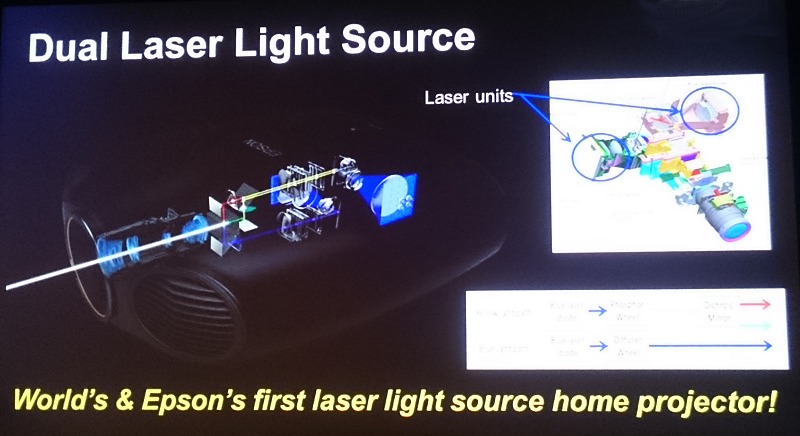 Pairing Epson’s 3LCD-R is its dual laser diode illumination system where one blue laser produces blue light and the other blue laser shines on a yellow phosphor that splits it to create red and green light sources. The rated white and color brightness output is 1,500 lumens, which squarely puts this as a home theater class projector for use in a darker environment. The designed projection size for the EH-LS10000 is a 100-inch screen, but we could clearly enjoy a larger screen like 135 inches as experienced in the KEC showroom. Fortunately, you don't have to necessarily use it in a completely dark room as we the projector could easily cope with a low level of light in the test room without affecting the image output quality or clarity. The EH-LS10000 can also handle 3D processing and employs active shutter glasses (a pair is provided with the projector out of the box) to provide the best possible 3D image quality for the viewers. Normally the projector's light output is reduced considerably when using 3D glasses, but even with a low level of light in the room, 3D viewing wasn't a problem at all. We reckon the good screen used at the showroom helped some as well.

The use of a laser light source immediately frees up maintenance concerns over a long run as the projector is rated for use up to 20,000 hours. Most mercury lamp based projectors have a lamp life of 3,000 to 5,000 hours and will cost you up to US$500 for a lamp replacement. As Epson likes to boast, that’s a savings of up to US$2,000 over a 20,000-hour service life. If you were to use the EH-LS10000 projector every day for 4 hours, it is calculated to last you up to 13 years! However, these figures are achieved only when using the projector in ECO mode; the specifications don’t detail for non-ECO mode usage.

On a related note, Epson has built-in a luminance sensor for automatic white-balance optimization to check and calibrate the power balance of each light source after every 100 hours of use since this projector is designed to be used for a long time to come.

Another big benefit from using a laser projection system is the vastly quicker start-up time of only 21 seconds - this includes warm-up period. Epson states that the first image actually starts showing from as early as 6 seconds from when the power is switched on, and is fully usable by 21 seconds since hitting the power button. This is actually a speed-up of 4 to 5 times from conventional lamp based projectors, thus getting you ready for your movie viewing that much quicker. While it may not sound like much, if you do use the projector often, the seconds and minutes saved do add up over time towards convenience.

The combination of a laser light source and 3LCD-R projection technology along with the projector’s increase in lens aperture ratio, allows the EH-LS1000 to deliver smoother, sharper and more detailed video quality than possible from a conventional lamp based light source with 3LCD projection. Most notably, is the delivery of richer and deeper black levels, which Epson calls it “Absolute Black” contrast. Epson claims that the EH-LS10000 can turn off the laser light source where the content is full black, thus achieving 0 lumens light output. However, this is hardly a realistic situation and you would probably never experience this in actual use. What you must understand is that this marketing tagline stresses of exceptionally good contrast levels, and that it truly delivers thanks to the new optical projection engine. 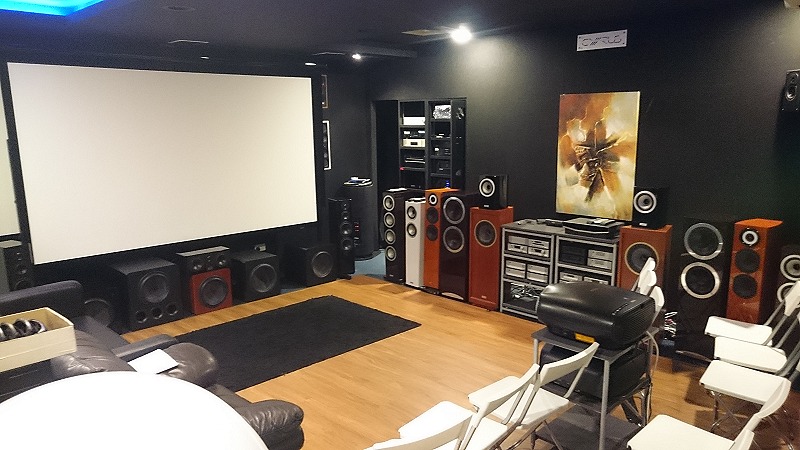 We experienced this firsthand at KEC’s showroom with a Stewart Filmscreen CIMA White Wallscreen. The basis of a good projector experience not only lies with good projector hardware, but it needs to be accompanied by a quality screen. We trialed Life of Pi on Blu-ray in a night scene with an A-B comparison of what the Epson EH-LS1000 is capable of delivering in Cinema mode as opposed to a competitive Sony VPL-VW300ES 4K projector which was also set for use in Cinema mode. The outcome is as shown from this comparison photo:- 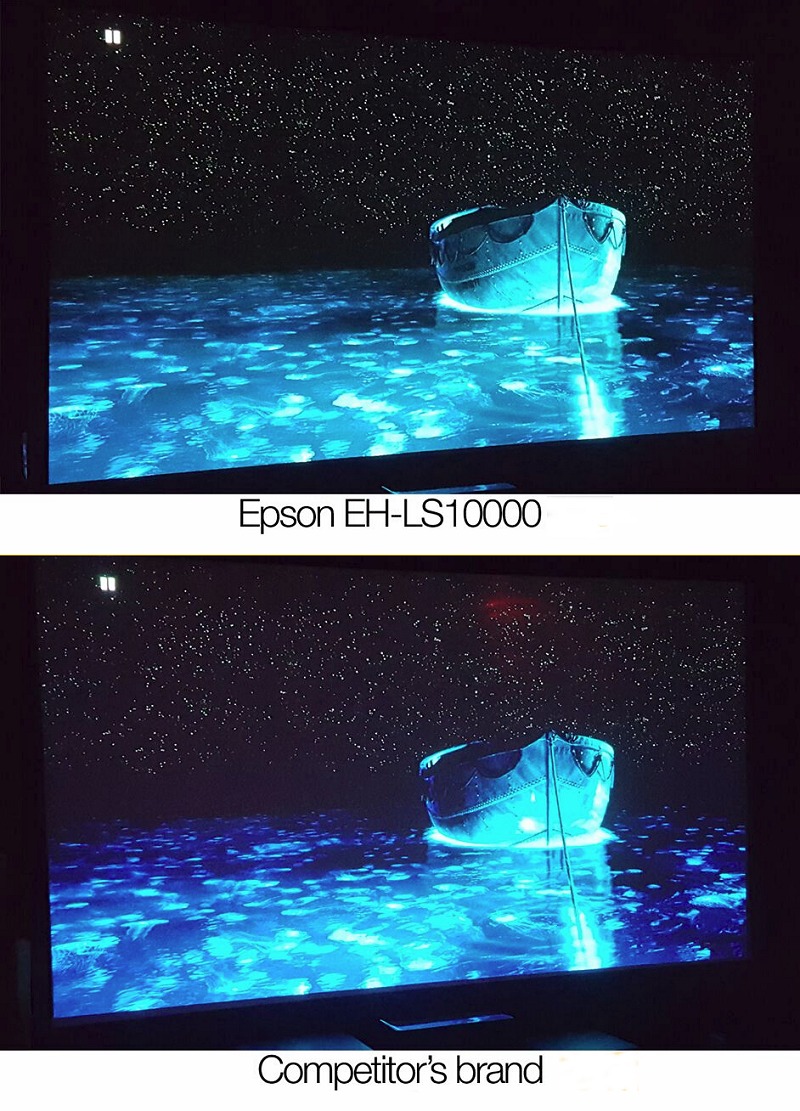 It’s hard to believe a competitor’s more expensive native 4K projector actually loses out to Epson’s EH-LS10000 projector where black levels are concerned, but this isn’t a test conducted by HardwareZone nor Epson. Perhaps the difference can be narrowed by further tuning on both projectors, but as it stands, the Epson put out a convincing show. What’s observable from the photo capture, but yet worth noting is the details and color preserved on the boat and sea. This outcome isn’t just from this one selected scene or movie, but it was observable across other movies as well. Here’s a scene from another movie rendered nicely on the Epson EH-LS10000 as it maintains a good skin tone and details from the darker areas. Following that is a short video clip to show the difference between both tested projectors:- 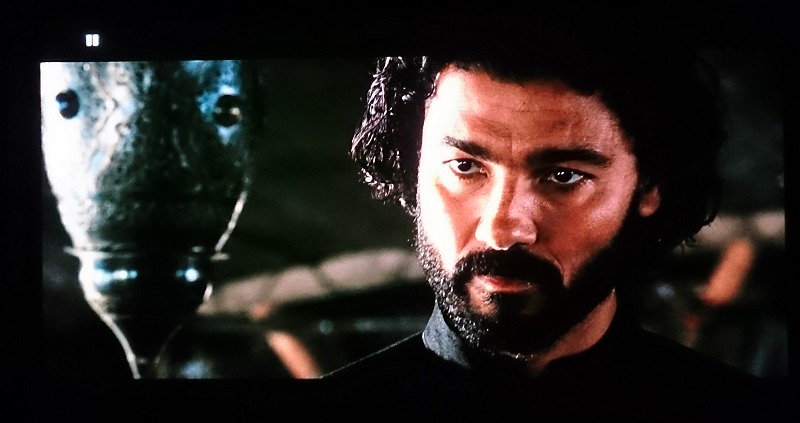 Epson’s new flagship projector not only gave us a good video viewing experience, it also made it a more comfortable one thanks to a new efficient cooling system that consists of copper heat pipes, huge aluminum heatsinks and a whisper quiet fan. True enough, our viewing experience with the Epson EH-LS10000 was extremely quiet as compared to the competitor projector on-hand. In fact, it was also far less hot during the course of the demonstration. These are lesser thought aspects of the movie watching experience that make it a better one as you can tune into the audio details of your home theater system and not be bothered by the projector humming in the background. 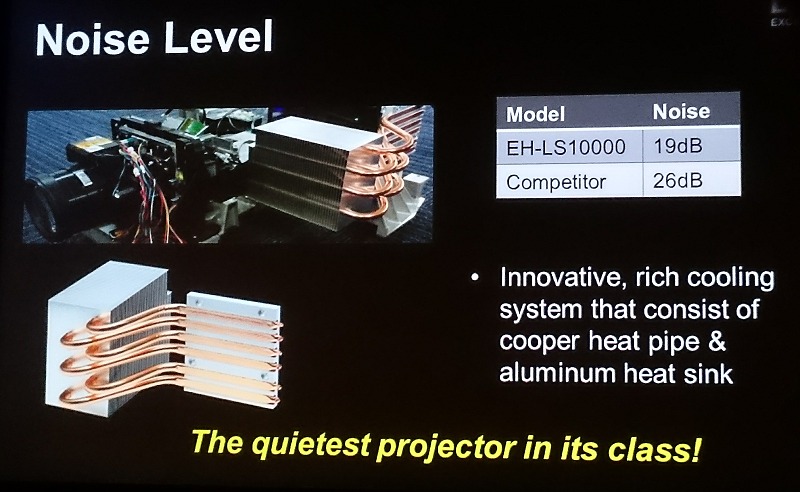 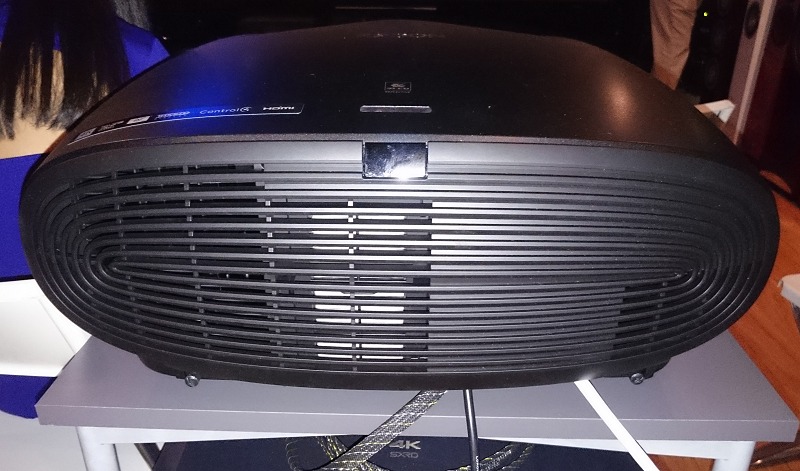 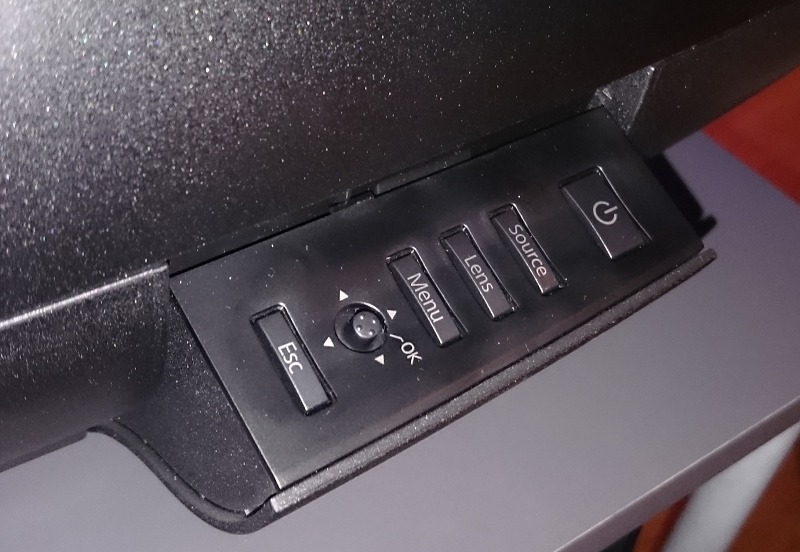 To sum up, we had a great time experiencing the word’s first dual laser 3LCD-R home theater projector, but at S$10,999, you would have expected native 4K resolution handling as well in addition to its long line of positive traits. Alas, you only get 4K Enhancement technology, which is fine for the interim when native 4K content is scarce, but technology and the landscape changes fast and even five years later. As such, we’re not too sure if the Epson EH-LS10000 gives you good value, but it certainly has left us a good impression in our test drive session. We hope to give it a go personally in our labs in the near future against other contenders to give you a definite verdict.