Hands on With The Dell XPS 11, and Introducing Dell Venue Tablets

Hands on With The Dell XPS 11, and Introducing Dell Venue Tablets 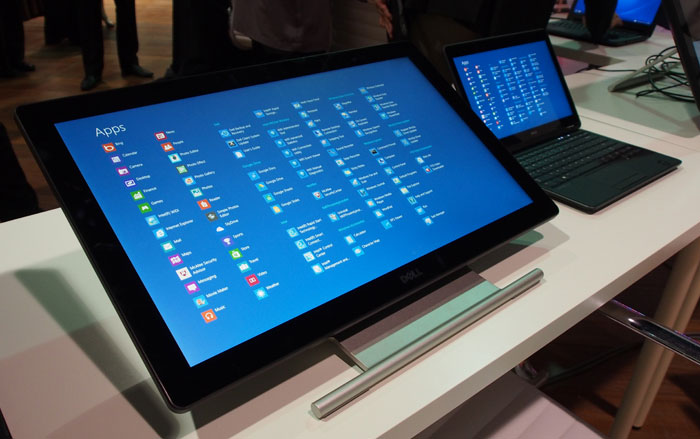 Dell recently launched an entire lineup of enterprise and consumer products for 2013 and 2014. There were notebooks, printers and all-in-one (AIO) desktops made specially for use in enterprise environments, as well as notebooks, tablets and AIOs suitable for consumers.

We also noticed that Dell is placing a heavy emphasis on design for their enterprise products to the extent that these can be easily mistaken for consumer products. An example would be the Latitude 7000 series of notebooks that strongly resembles Dell's XPS branded notebooks in terms of appearance and materials used such as carbon fiber and aluminum. 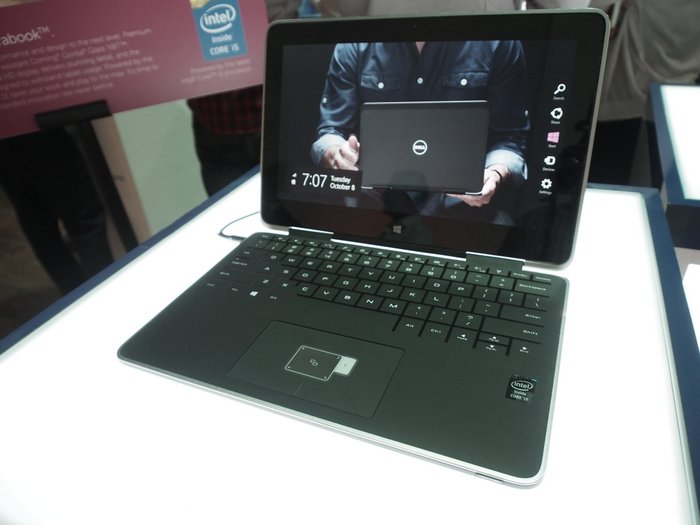 Of the plethora of devices launched, new Dell XPS 11 Ultrabook was particularly of interest. It's essentially an 11-inch Ultrabook with a fourth generation Intel Core i3 or i5 processor.

However, the processor it sports is significantly different from the usual U-series processor that Ultrabooks typically have. Instead, it has a Y-series processor that's almost as powerful, but requires much less power and hence cooling, allowing for thinner form factors. It's made primarily for use in Windows 8 tablets, which is apt for the XPS 11. 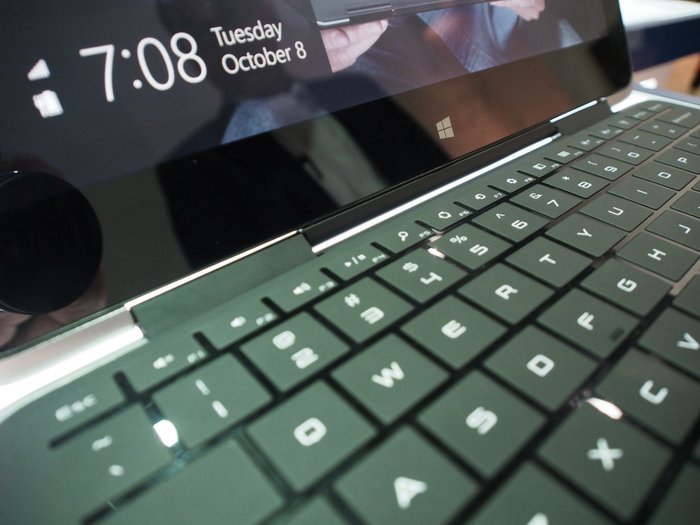 Unlike its larger sibling, the Dell XPS 13, the XPS 11 sports a pair of new patented hinges that allow its gorgeous QHD (2560 x 1440), 400 nits display to flip all the way back. It then becomes a fully functional Windows 8 tablet. In this mode, the notebook's keyboard and trackpad are disabled, so there won't be any unintended input when using the XPS 11 as a tablet (much like how the Lenovo Yoga and Microsoft Surface tablets respond).

Another interesting aspect about the machine that deviates from the norm of notebooks is its solid surface, backlit, touch sensitive keyboard that's designed for tablet use. It reminds us of Microsoft's Touch Cover that does not have individual keys, but rather a flat surface that uses touch to register input. 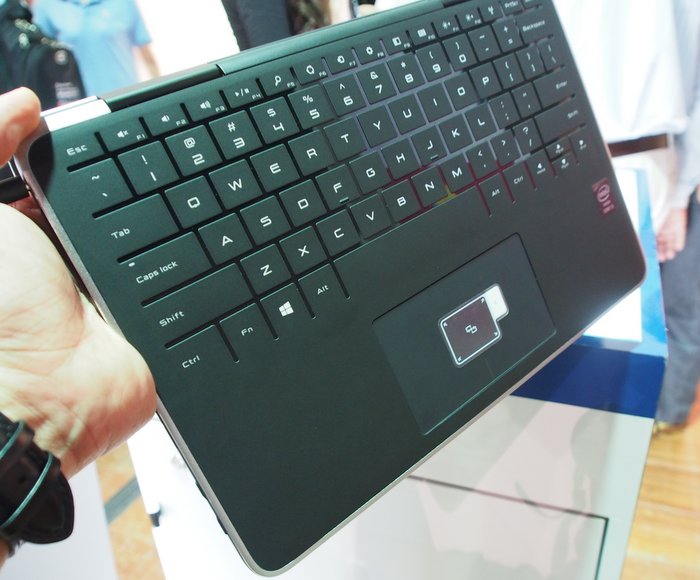 The entire keyboard has a silicone finish to it that makes it easy to grip in tablet mode and when you place the XPS 11 on a smooth surface, it won't slip. However when we tried typing on it, just like the disadvantage of the Microsoft Surface Touch Cover, we found the XPS 11 requires quite a bit more force than expected to get the keyboard to register a key press. This affects typing accuracy, though accuracy might improve once your fingers get accustomed to the touch keyboard. But if you frequently shuffle between traditional keyboards and a touch-based keyboard of the XPS 11, it could be an annoyance.

As for the machine's build quality, we found that it's very robust. It has a tough but light carbon fiber lid, a machined aluminum chassis, and an edge-to-edge Corning Gorilla Glass NBT protecting the machine's display that makes the machine feel rigid. All these components add up to enable the XPS 11 to withstand a fair bit of abuse from daily use. 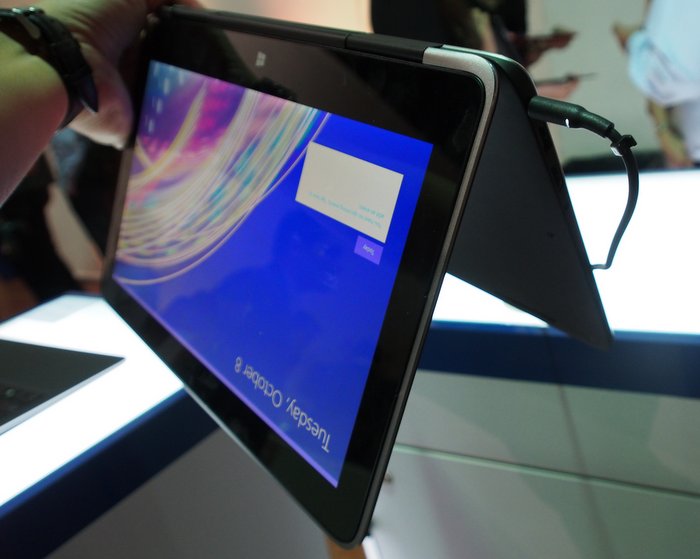 Building the XPS 11 from such premium materials also enables the machine to be very thin (11-15mm), and light (1.13kg). However, Dell also managed to squeeze in quite a number of ports. It has two USB 3.0 ports, one full-sized HDMI port, an audio combo jack and even a 3-in-1 card reader.

But of course, having good build quality isn't enough to move notebooks off the shelf. Internally, the XPS 11 is powered by Intel HD Graphics 4200 integrated GPU, 4GB of system memory, and an SSD. Users are able to choose between 80GB, 128GB or 256GB capacities, depending on their storage needs.

We haven't had the chance to test out the machine's battery performance, but it also packs a large 40WH battery, which is slightly larger than those on other Ultrabooks. In our experience, having a 40WH battery and a fourth generation Intel Core processor usually translates to excellent battery life.

However, the XPS 11's bright QHD display, might consume quite a bit of power, so its brightness has to be dimmed down if you're not connected to a power outlet. 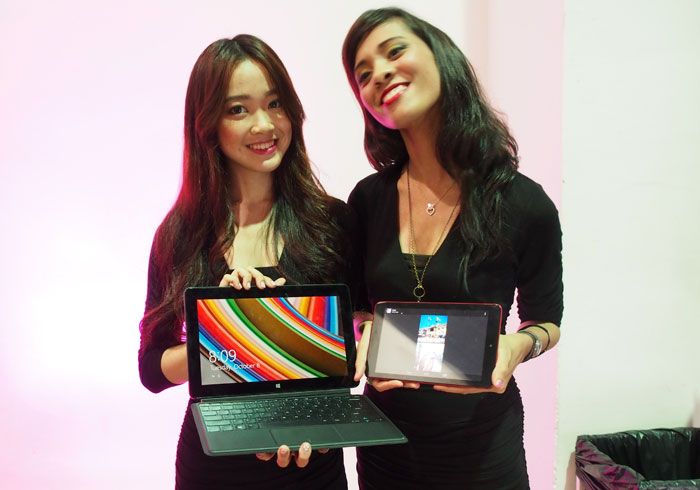 Dell also took the opportunity to reveal its upcoming Venue series of tablets that have Intel processors inside. Firstly, there's the Venue 7, a 7-inch (1280 x 800p) Android tablet with an Intel Atom processor, 2GB RAM, 16GM eMMC storge, and Intel HD onboard graphics. It weights 314g, and measures 9.5mm thick.

Next, was the Venue 8, an 8-inch Android tablet with specifications that are similar to the Venue 7, but give users a choice of 16GB or 32GB eMMC storage.

Last but not least was the Dell Venue 11 Pro. Despite its name, its display size isn't 11-inches, but rather 10.8-inches. Its screen was bright and vibrant, thanks to the LED backlit, full HD, IPS panel that Dell put onto the Venue 11 Pro.

Underneath the hood, the Venue Pro 11 is able to run several different types of processors. Users can choose from Atom, Pentium or even Intel Core Y-series processors, depending on the power or battery performance that they need.

Atom and Pentium will provide excellent battery lives and would be affordable, but they can't match up to the computing performance that the Intel Core Y-series processors can provide. Tablets running the Intel Core Y-series processors will be able to do much more since they are proper notebook-class CPUs, but at the expense of the device's battery life. Dell hasn't mentioned if the Venue Pro 11 might be available in other battery capacities to offset the Core processor's increased power consumption.

Processor choices aside, all Venue Pro 11 tablets will have 2GB RAM, but users can choose storage capacity (32GB, 64GB, 128GB or 256GB SSD) based on what they need.

There aren't any pricing details on Dell's new products, but the XPS and Venue devices will be available in the coming few weeks. We'll update this space once pricing details have been revealed, so keep your eyes out for them here.