One of the most attractive aspects of the Sound BlasterX Katana has got to be its distinctive and perhaps even iconic fully programmable LED lighting system that runs the length of the sound bar. I mean, have you actually seen such on a speaker system, and on a sound bar to be specific? Fitted with 49 LEDs underneath the Katana’s front face, it can recreate any of the 16.8 million colors in the spectrum with ease using the Sound Blaster Connect for PC control panel. And unlike most other RGB lighting enabled product, believe us when we say this isn’t another one screaming for your attention. In fact, Creative has pulled this off very tastefully as the LED’s shine down on your desk and oozes just the right amount of appeal to make it both attractive and classy. Dubbed the Aurora Reactive lighting system, this is RGB LED lighting done right. 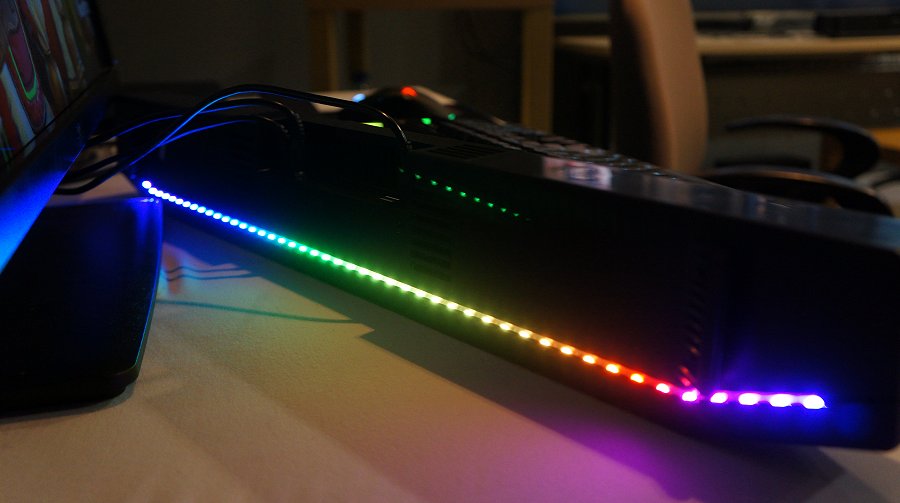 While we're not quite sure if you would like to have the lights on all the time, you can configure the hell out of it to suit your every whim and fancy - choose between various effects such as wave, pulsate, color morph, solid color and combine that with color variations of your choice and even speed to control the rhythm and flow! You can save your color pattern of choice with the BlasterX Acoustic Engine's four audio presets to create the right mood for gaming, watching movies or more. Would it ruin your movie? Not at all, as there are much more subtle variations that you can apply and you are in the driver's seat to fully control it. You can of course choose to turn off Aurora Reactive lighting, but we think the prospective buyer is unlikely to do that once he/she has meddled with the options ;) 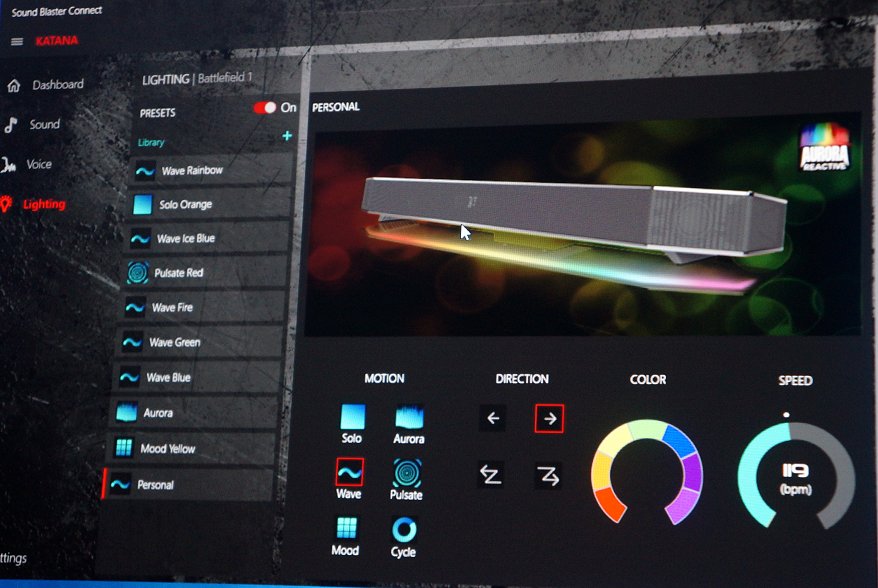 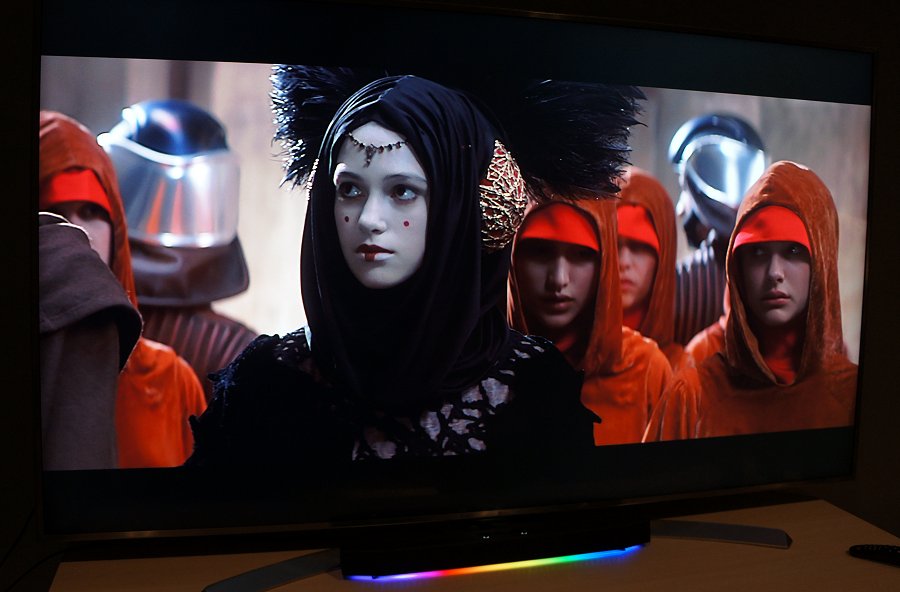 We’ve shared quite a lot of details on what the Sound BlasterX Katana is all about, so does it really rock like a sledgehammer? Totally.

First off, we listened to a few music tracks from a paid Spotify account (read high quality, ad-free audio), so that should give us a typical representation of everyday use on how people consume music these days.

While Creative lined up several audio tracks for listening, I focused on a set of tracks we frequently use to audition speakers back in our lab – music from the Eagles group. First off was Hotel California and we were colored happy as we noted all the percussion instruments were well represented. Audio in general was fine (for a sound bar of its price point), but note that this was in Neutral audio preset. Creative recommended to use the Concert audio preset to best feel what the Katana was capable when reproducing music. Besides, the recordings we've chosen were originally from a live concert.

Engaging Concert mode elevated the Sound BlasterX Katana to another level with a very wide sound presence – so much so if you closed your eyes, you might even think the audio was from floor standing speakers set apart as opposed to a little sound bar like the Katana. And it even felt as if there was a center speaker to go along with the floor standing speakers – that is the level of audio reproduction that the Katana is capable of.

It wasn’t perfect though as we felt the vocals could have been clearer – perhaps some fine tuning with the BlasterX Acoustic Engine’s parameters might have helped it better. Bass was strong and relatively well controlled, though we did notice a slight tinge of clouding of the mid-range at times. As critical as I might sound, if you reconsider the Katana’s S$400-odd price point and form factor, it is already punching well about its class. So you might even say I’m nitpicking.

We tried one more track from the Eagles, this time it was Desperado. In this track, the Katana delivered this piece quite well and we noted a good balance of mids and tight bass notes. Engaging Concert mode to let the DSP do its magic, once more it provided a good uplift in audio presence, making the track even more enjoyable.

At this point of time, we’re a little hooked on to the Katana’s audio presets. For once, we can gladly recommend these audio presets as it brings about a significant positive improvement to the audio performance. There’s nothing fake or artificial about the resultant audio and we trust that you’ll enjoy what you’ll hear. 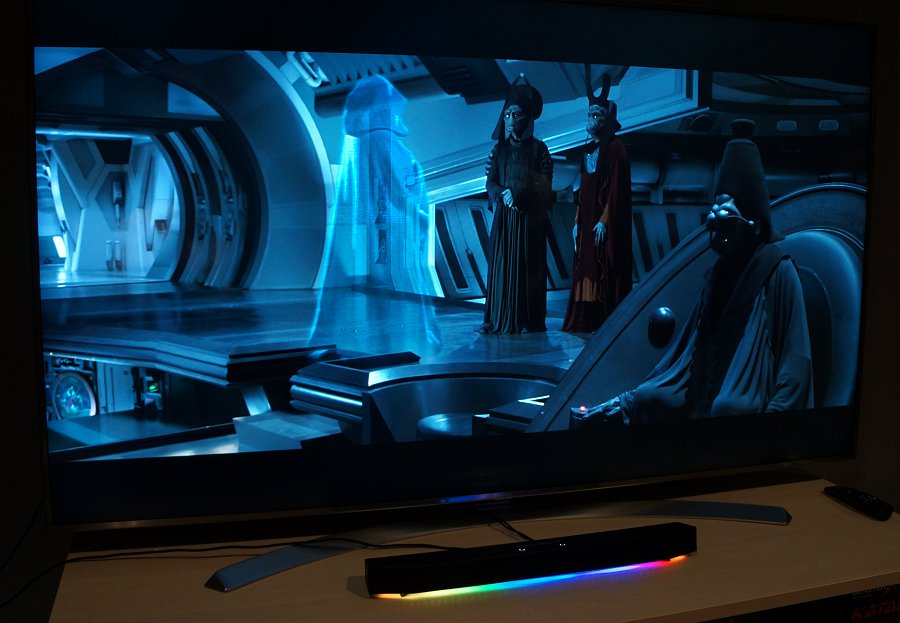 Sound bars like the Katana are often used for multi-purpose deployment and with the speaker’s design and its ability to cater to near and far-field listening, movie playback is a must on our to-do list while auditioning it.

As you might have guessed, Creative catered to this with a Blu-ray copy of the Star Wars: Episode1 – The Phantom Menace movie. We plunged straight to the heart of the movie, the pod race scene. It is without doubt a hallmark scene of the movie, as well as a favorite with home theater shops. Very few movie scenes have the dynamics of this scene, both in sound and visuals. Having experienced the Katana’s impressive audio presets, we engaged the Cinema mode before firing up the pod racers.

The Sound BlasterX Katana didn’t let us down with excellent all-round performance. Positional audio was great and let’s not forget the wonderfully wide and accurate sound stage. We cannot stress the fact that it sounds far more impressive than it would have you believe. If we were to do a blindfold test, the Katana would easily be mistaken for a full-fledged five-piece speaker system, with floor standing speakers no less. So yes, the S$419 speaker sounds more like it would have in certain S$2,000 system(s).

You might think the Katana might end up having difficulty reproducing such a dynamic scene with very fast transitions, high pitch mechanical whining, powerful engine rumbles and much more happening all at once (or in short succession), but Creative's newest speaker handled it all with ease. We reckon the tri-amplified, DSP-driven audio system design that we shared earlier has a big part to play in the speaker’s excellent performance.

For night listening, you could always engage the Night sound mode preset that suppresses the low frequency to be tighter and enhances the dialog. This allows you to enjoy your shows at lower volumes but not missing out on the full audio body. If you prefer to hook up headphones, no worries, the speaker output jack from the speaker will still allow you to keep the Katana as the hub for audio processing, so you get all the Sound Blaster tweaking goodness. 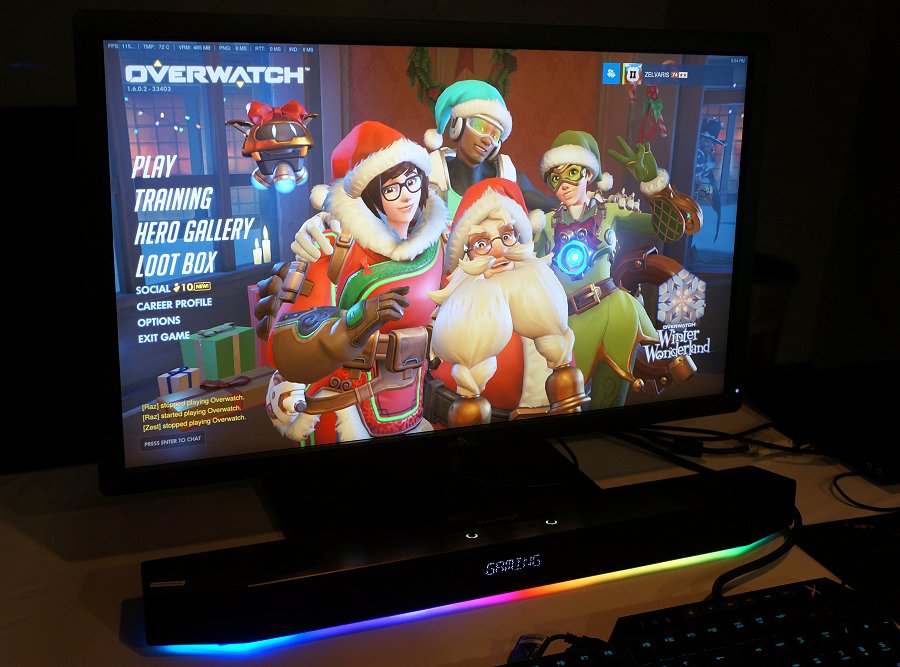 Lastly, we can’t end this hands-on article without immersing in a game or two; especially since the Katana was aimed at the all-round gamer who would indulge in all of the above usage scenarios as well. Our choice was the current hit game Overwatch, a team-based multiplayer FPS that has taken the online scene by storm.

By default, the Sound BlasterX was already a decent gaming speaker system as we belted bullets while we moved/strafed around.  But how about when engaging the Gaming sound preset on the speaker system? Boom! Once more we were treated with an expanded sound envelope and better audio cues to what’s taking place around our environment. We also noted Katana was able to better reproduce audio effects interaction with better presence and positional audio within internal or external environments respectively. In total, a more enjoyable gaming session and reacting quicker from the heightened senses we were able to perceive thanks to Katana engaged in Gaming mode.

Next up, Battlefield 1 and Creative even had a specific audio profile that we could engage within their Sound Blaster Connect PC control panel. Activating it was definitely a bonus as the game had greater clarity in the cacophony of noises that was present early in the battle scene. This audio profile certainly nailed things as we experienced an ultra-wide immersion in-game; kudos for Creative on further enhancing selective top games that they feel are worth the extra effort to engineer specific game profiles.

Creative's Sound BlasterX Katana is the most power packed miniature sound bar we've ever experienced to-date and their audio engineering decisions have certainly paid off. We were truly awed by the Katana’s larger than life audio performance – something that can only be rivaled by much more complete and pricier audio systems.

Couple the impressive audio performance with an attractive sleek design that can be used just about anywhere in your home - the PC in your room, your TV in the hall or just to flood a room with audio - the Katana has you covered. And don't forget its impressive Aurora Reactive lighting system that's just icing on an already great package, Creative has a solid winner on its hands. This could just be the best S$419 you might spend and it's available immediately. And that's just the suggested retail price; we all know that Creative generally sells it lower than the SRP during shows, events and special promotions, which happen regularly throughout the year.

For PC-bound gamers, sure, there are better options that probably get the job done for less and is as impactful (Klipsch Promedia series, etc.), but for all-rounded usage in any room size, seating style (near-field, far-field) and in sound bar form factor - there's really no better option in the market. Razer's Leviathan might have arrived a whole lot earlier to the market, but it was never going to get a satisfactory seal from us at HardwareZone because of its ho-hum performance. The Creative Sound BlasterX might seem like another attempt of the same, but it is anything but that. 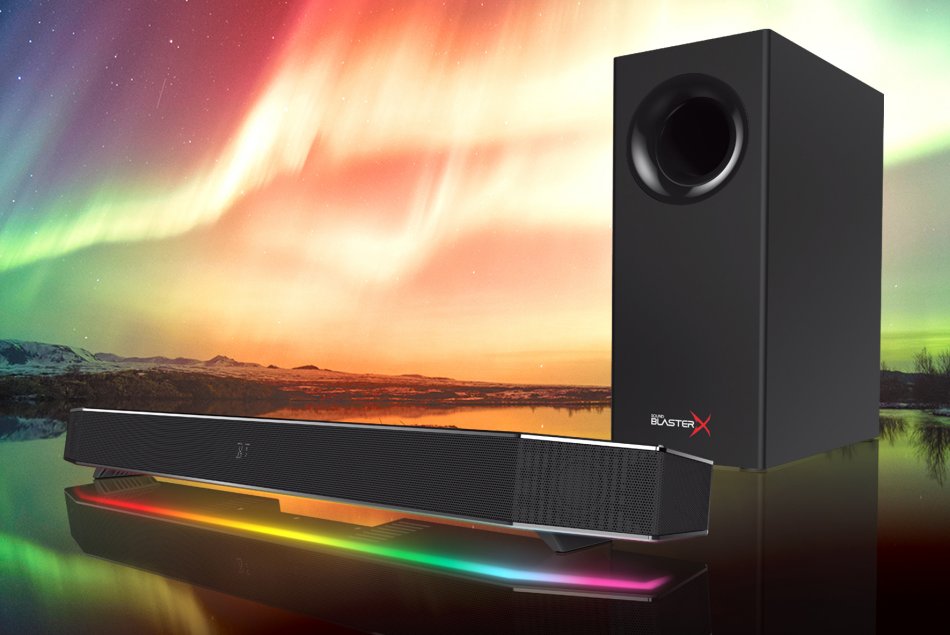