With the subwoofer being a passive wired model, that means all the audio processing and amplification takes place within the main sound bar unit itself. Here’s a quick peek underneath to see how Creative has designed it:-

Like its Razer counterpart, the Sound BlasterX Katana is also a penta-driver sound system that consists of quad drivers within the sound bar unit and the fifth being the passive subwoofer. However, the driver properties, placement, amplification and more are totally different on the Creative solution.

For starters, the twin midbass 2.5-inch drivers are oriented to fire up, which reduces the main speaker unit's height and helps to better recreate environmental audio since there's more height projection. These drivers are driven by neodymium magnets and deliver 15W RMS of power each.

Located towards the both ends of the sound bar, Creative has placed their high-excursion 1.34-inch inverted aluminum dome tweeters that are rated for 7.5W RMS of power each. Apparently, they’ve been separately chambered with very low resonant frequency and our informal audio listening session does corroborate with this. The wide placement of these tweeters naturally lend themselves well to a wide soundstage and as we pointed out earlier, despite such a placement, the Sound BlasterX Katana is able to perform at both near and far-field listening. At less than a ruler’s distance away from the main sound bar speaker unit, you would be hard pressed to figure out that there aren’t any speakers in the center portion of the sound bar while listening to dialog; that’s quite a feat of positional audio engineering. This quality bodes well if you place your gaming notebooks in front of the Katana – you will still get unobstructed audio performance since there aren’t any speakers in the center of the unit.

So what is behind the center portion of the Katana? That’s where all the audio processing, amplification and more take place. Unlike most audio equipment and sound bars of this class that employ a single amplifier to drive the entire frequency range, the Sound BlasterX Katana employs three amplifiers – each dedicated to solely driving the low, mid and high frequencies respectively.

This tri-amplification design in theory should allow the Katana to produce clear, precise and well-balanced audio at low or high volumes, across both low frequency rumbles to the high frequency shrill of an alarm. Indeed in our audio trials, the Katana excelled in various usage scenarios that’s only possible because of the audio engineering decisions made. Here’s a quote from Creative’s literature:-

The Sound BlasterX boasts a sophisticated fully active 5-driver where each driver is individually powered by a DSP-controlled amplifier. Audio signals are split into individual frequency bands by the DSP before the right frequencies are fed to the individual amps and drivers accordingly. This results in distinct, accurate audio reproduction at every part of the spectrum with very low distortion.

Working hand in hand with the Katana’s tri-amplification design is a powerful proprietary multi-core DSP for all the intelligent processing to deliver the customizable audio enhancements that its control panel allows. With a Dolby Digital 5.1-channel decoder, hardware powered audio restoration, voice processing, 7.1-channel virtual surround sound, audio enhancements for games, movies and music, this all sounds very much like Creative’s very own audio processor. In fact, close sources have confirmed that the Sound BlasterX Katana is in fact using a SB Axx1 audio processor – the very same one that’s used in Creative’s top audio products and sound cards. That figures why the suite of capabilities sound so familiar.

In any case, you would be glad to know that this powerful proprietary DSP is more than alive and it has the audio chops to prove it. The BlasterX Acoustic Engine is at its finest in the Katana and its audio presets works perfectly to deliver the resulting intended experience. Normally, such DSP audio presets hardly make a difference in audio quality or they sound artificial. Not on the Katana and we insist that you use the 4 key presets to improve your auditory experience – Gaming, Concert, Cinema and Night mode.

You could also add and shuffle around other presets from the pre-configured profiles offered, downloaded from Creative or self-configured with the Sound Blaster Connect for PC control panel. 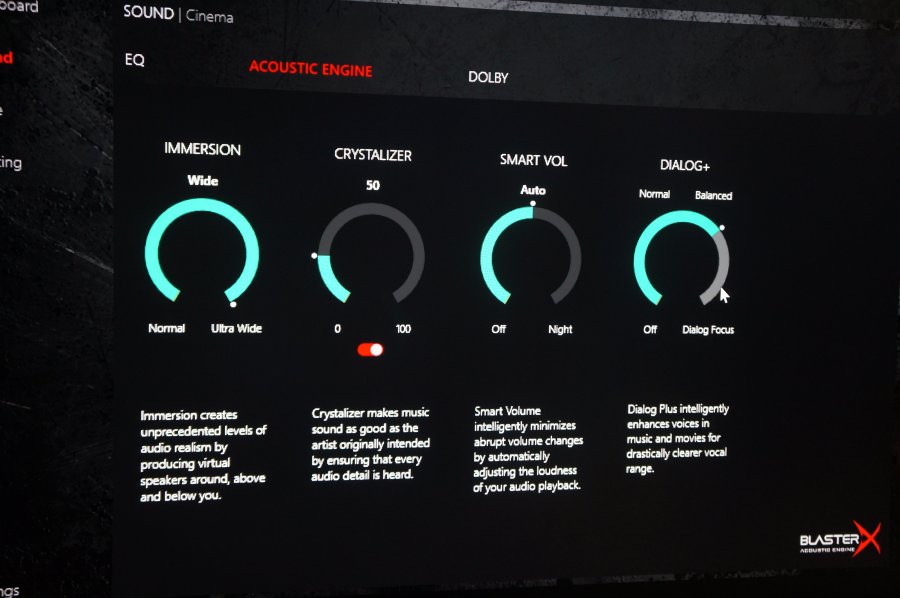 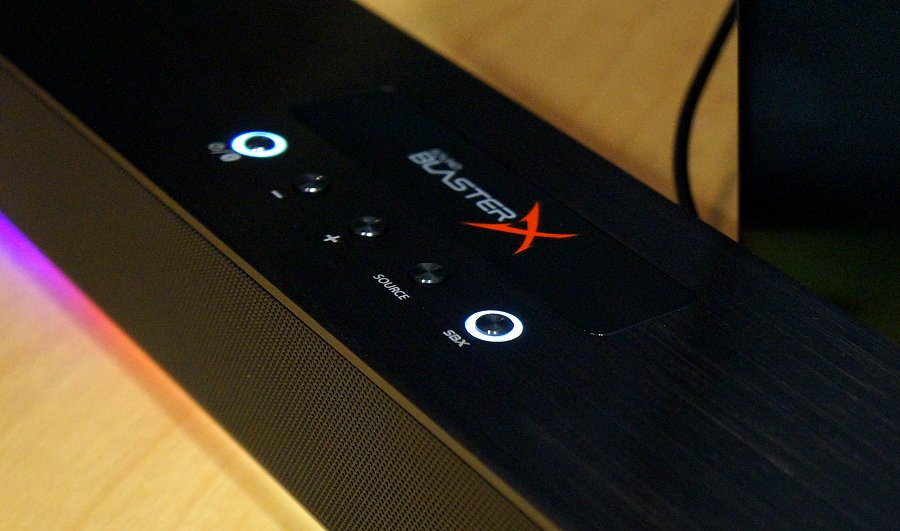 Controlling the Sound BlasterX Katana is a piece of cake. More so that its volume control – be it on the speaker itself, the remote or the control panel – is in sync with the PC’s master volume control in the Windows OS. This is really takes the guess work of the sound levels regardless of where you are and what you are doing.

On the Katana sound bar itself, you’ll find the following buttons from left to right (in line with the above photo): a Power/Bluetooth button (press and hold for 3 seconds to engage Bluetooth pairing), volume controls, source button to cycle through inputs and a SBX button which is essentially the BlasterX Acoustic Engine audio presets that you can cycle through – the default is Gaming, Concert, Cinema and Night mode.

Connectivity options are what you need to know next and all the connectors are nestled at the rear center of the Katana sound bar:- 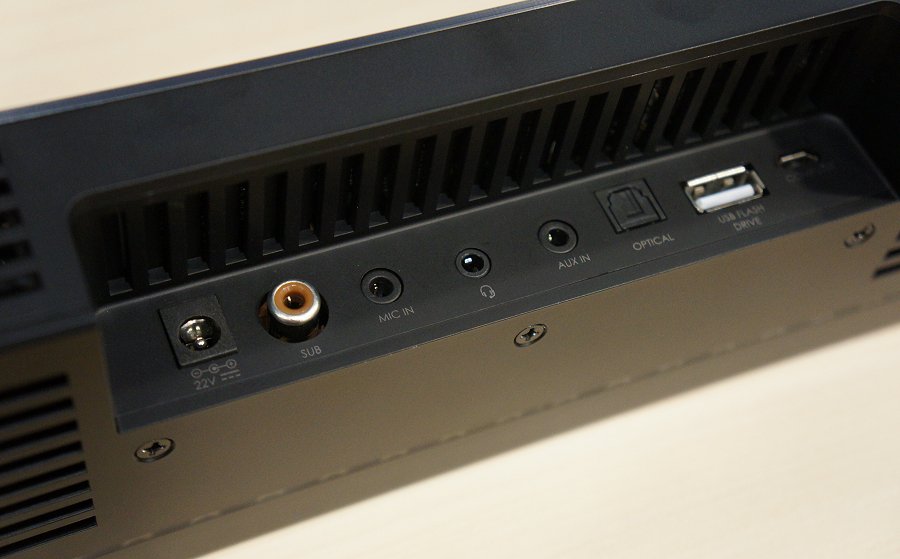 We’ll list each port and its function from left to right in accordance to the photo above:-

You’ll also be glad to know that the Creative Sound BlasterX Katana fairs much more favorably to the Razer Leviathan in the connectivity department. We compare them for you:- 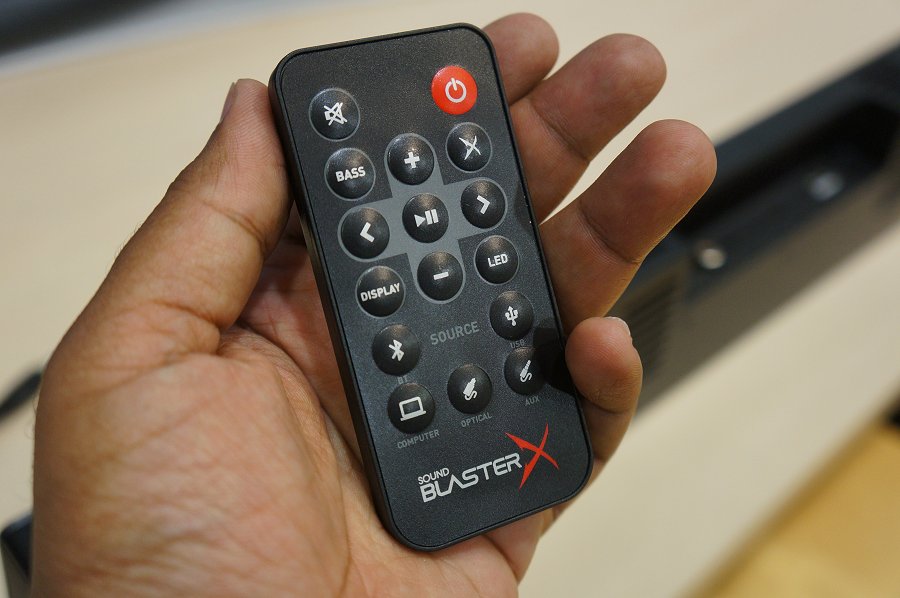 The Katana has a built-in amplifier that is optimized for 32-ohm impedance gaming headsets as the sound system is first and foremost designed for gaming. These headsets require higher current at lower output voltages.

That being said, there is enough voltage output to drive higher impedance/lower sensitivity headphones. For example, one of the Creative product managers we spoke to had a pair of Sennheiser HD6XX modeled after the HD650 from Massdrop and he was able to get satisfactory volume when the Katana is set to the highest volume even though it’s a 300-ohm headphone.

Here's a good gauge whether the Katana can drive a particular headset as shared by Creative:-

In general, the Katana has similar output voltage swing as your iPhone, and would drive high impedance headphones to similar volume. So it really depends on the individual’s headphones he/she is using as well. If it works fine on the iPhone, then it’s definitely not an issue for the Katana.