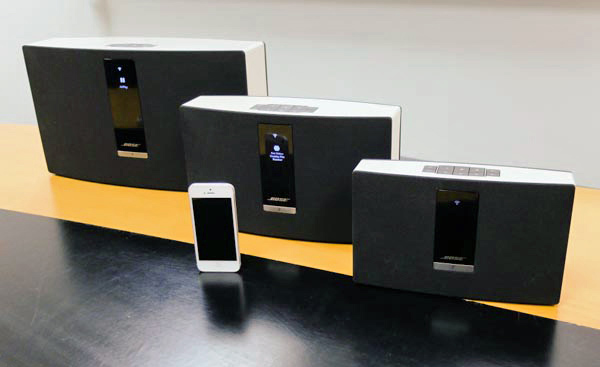 Bose announced availability of its dedicated SoundTouch Wi-Fi speakers in Singapore earlier this year, and just recently we had a chance for a brief hands-on session with the full family of speakers - SoundTouch 30, SoundTouch 20 and the SoundTouch Portable Wi-Fi music systems.

With this series, Bose opted to go Wi-Fi over Bluetooth, thus allowing multiple SoundTouch devices to access a single music source. Which is really the big idea: music sharing across your entire home, with the ability to control what’s going on in individual spaces. 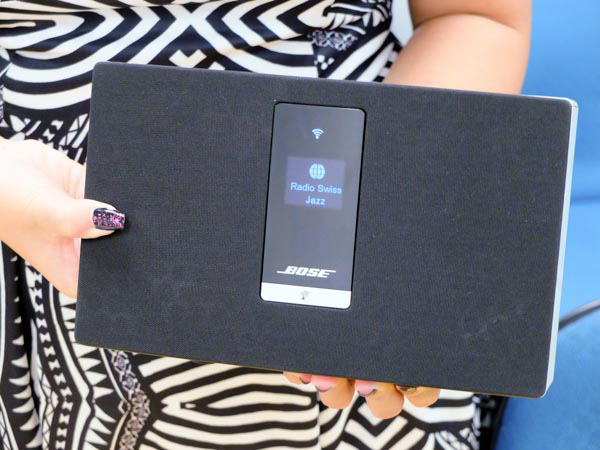 All three sport the same clean modern look, with just a slim OLED display adorning the front to indicate what’s currently playing. Up top, the design is just as sparse – with just the power button, aux switch, volume controls and the six channel buttons grouped neatly in the center. Overall, the simple black and white design makes for a device that should fit right in with any home or even office space. 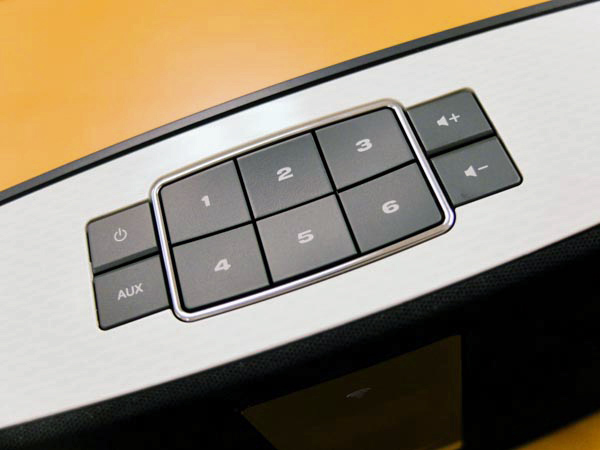 The SoundTouch 30 Wi-Fi system (S$1,099) is the largest and most powerful of the three, and is meant to be the main system in your home. Boasting a custom built subwoofer, it certainly seemed capable of living up to Bose’s claim that you could hear music playing from it from a floor below. Based the SoundDock 10 system, you can expect the SoundTouch 30 to have a similar sound signature - full and rich. This unit weighs 8.39kg and is 43.5 x 24.7 x 18.1cm in dimensions (W x H x D), so do make sure you find a sturdy and large space to house the SoundTouch 30. Since it requires a power point, it would be best to situate it near one.

The SoundTouch 20 (S$639) is the in-between one, meant for more intimate listening (i.e., smaller rooms) and is meant for your bedroom or study. It features dual passive radiators for better sound, as well as a brand new sound architecture. This unit weighs just 3.18kg and is 31.4 x 18.8 x 10.4cm in dimensions, which it makes it more apt to place in on your bedroom side table or main study table. Don't forget that the SoundTouch 20 too requires a power point to operate.

Finally, the SoundTouch Portable (also at S$639) is the smallest of the lot. We’re told the acoustics are modeled after the SoundLink 3, so expect balanced and neutral sound even at higher listening levels. A rechargeable lithium-ion battery keeps the music playing on-the-go. It must be noted here that because the SoundTouch Portable doesn't support Bluetooth, you’ll need to bring a Wi-Fi hotspot with you, or keep an audio cable handy to use the aux-in at the rear. Apple users do have another option though: the system supports AirPlay so they can connect and stream away. Unlike the SoundLink series, the SoundTouch Portable wasn't exactly made for on-the-go use, but rather as a speaker that you can easily tow it with you as you move across different areas of your home within your registered network and not worry about power points - great if you need to bring a speaker out to your back yard or perhaps your walk-in wardrobe among other areas. 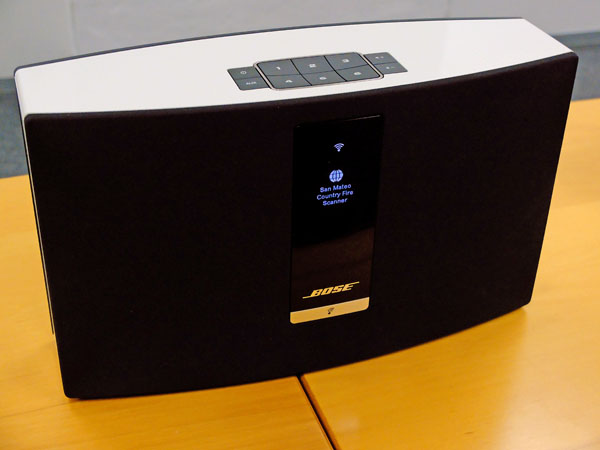 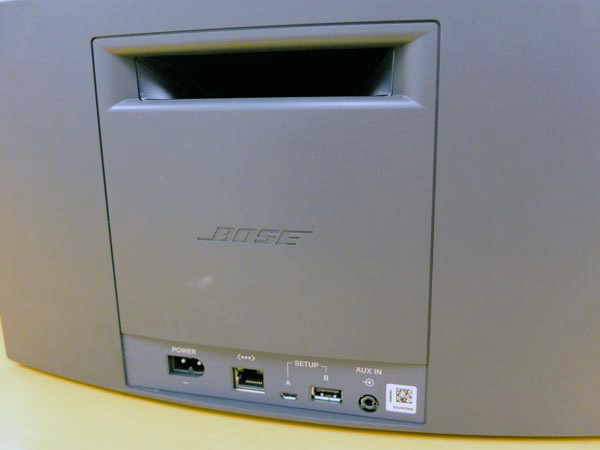 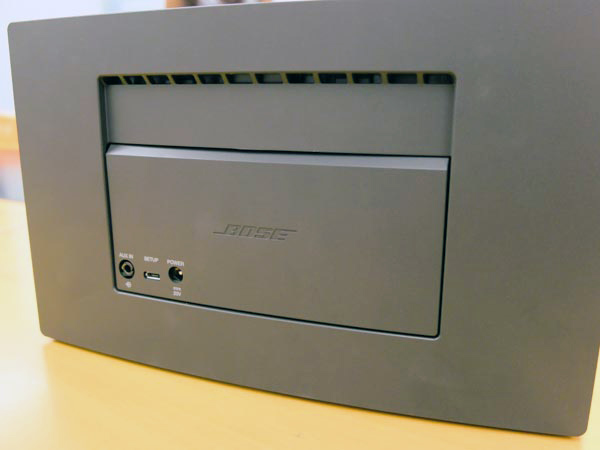 Set Up and Go

Setting up the SoundTouch system is actually a relatively simple process, but, despite what you might assume, isn’t done wirelessly. You’ll need to plug the SoundTouch in to your computer via USB for the initial set-up, which includes network and sharing settings to be set via the SoundTouch application. This setup application is compatible with Mac OS X 10.6 or newer, and Windows XP, Windows 7 and Windows 8.

Once the initial setup is done though, you can place it wherever you like, as long as it’s within your network range that you've configured it in (in case you've multiple network SSIDs) and a power point within close reach.

You can then choose the available internet radio stations or play music that's either managed by iTunes or the Windows Media Player. You can also download iOS or Android SoundTouch Controller App to expand your ability to control your SoundTouch music system with ease, but remember that you're still limited to the internet radio stations and audio libraries from your desktop or notebook systems. This means and mobile app purely acts as a controller and nothing more; you cannot stream audio contained within your mobile device - unless it's an Apple device that support AirPlay. Sadly, the SoundTouch systems don't yet support audio playback from NAS boxes (a future update will enable this later in the year), and it doesn't have an AM/FM tuner, nor is it able to stream TV audio or video clips. While it has several internet radio station options, it doesn't yet have support for popular music services like Deezer and Spotify - both of which are major players in this region.

Bose states that it supports MP3, WMA, M4A, AAC and Apple Lossless formats, while FLAC support will arrive in a future software update. 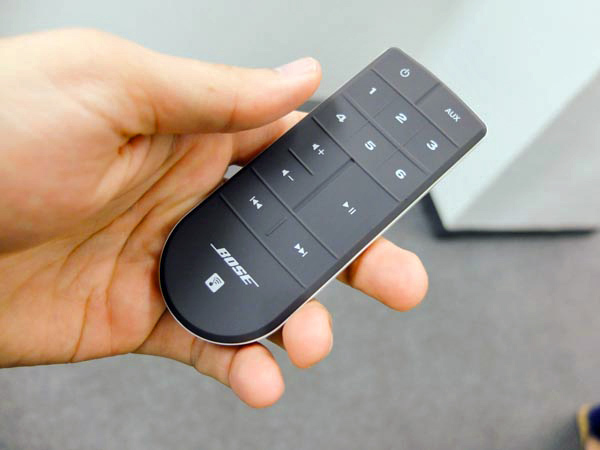 "Stations" are basically like playlists - for example, you can set a station with all the songs in your music library from Katy Perry, and one to play just rock. If you choose to do so, you can even preset individual songs, but you're still limited to the same six slots. 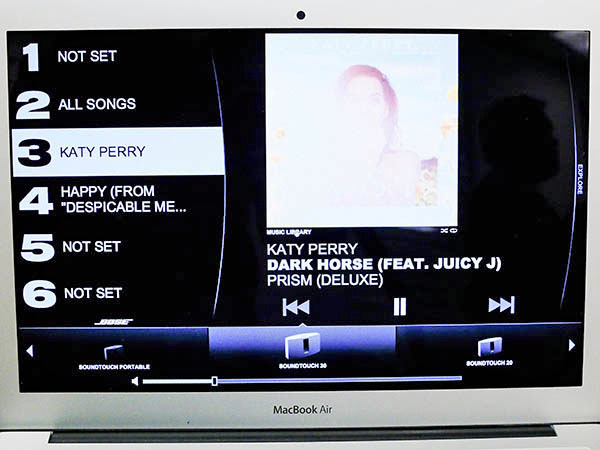 Where the SoundTouch music systems and app shines is in the way it allows you to control multiple SoundTouch systems at once. You can play the same song on all connected systems together, set an individual station for each, adjust volume individually or collectively via a master slider, and likewise control playback on one or all devices.

Overall though, if you intend to have multiple listening spaces in your home and want the convenience of being able to control them all at once, this is one system that is worth considering. As for how it stacks up against the competition (e.g. Sonos) and its actual audio prowess, stay tuned to our evaluation in the near future as we unravel if the SoundTouch systems can justify their high price points.