Hands-on with the ASUS ZenBook Flip S: Probably the thinnest convertible you can buy

Hands-on with the ASUS ZenBook Flip S: Probably the thinnest convertible you can buy 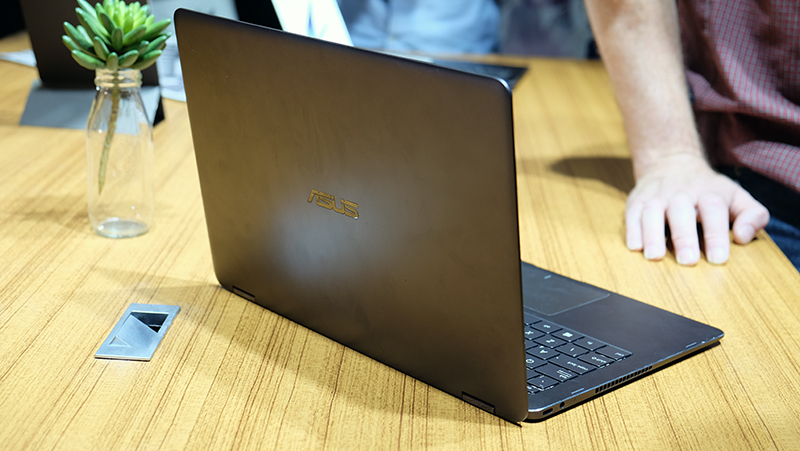 ASUS kicked off its first press event at Computex with the ZenBook Flip S, a strapping convertible that chairman Jonney Shih animatedly described as the world’s slimmest.

It’s not difficult to see why he was so excited – the ZenBook Flip S is dashing, and measures a mere 10.9mm thick. In comparison, a convertible like the Lenovo Yoga 910 measures 14.3mm. That may not seem like a big difference on paper, but even a cursory glance at the Flip S will have you marveling at just how thin it is. 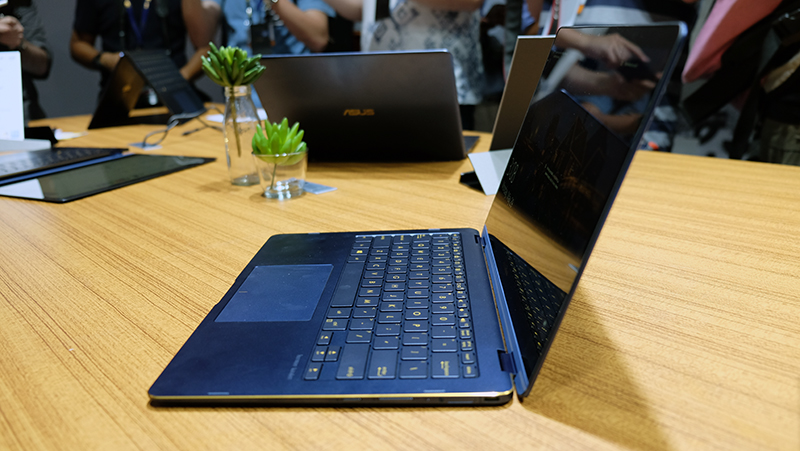 The notebook is crafted from a single block of aerospace-grade 6013 aluminum alloy, and features all the hallmarks of the ZenBook series, such as the pattern of concentric circles on the lid, gold flourish on the edges, and a rich Royal Blue color option. It is also available in Smokey Grey, but the blue takes the cake by a wide margin. But if there's one drawback, it's the fact that the machine is quite the fingerprint magnet. At the crowded hands-on area at ASUS' event, all the devices were slathered in prints, although helpful workers were on hand to valiantly wipe them off.

To be fair, your notebook won't have to suffer through the crummy paws of a thousand rabid tech journalists, but you'll have to put some work into keeping it pristine. 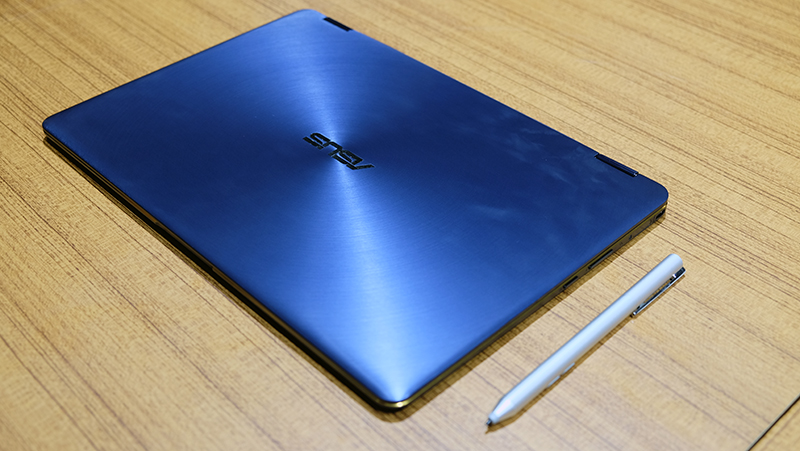 That aside, the Flip S also has the specifications to back up its looks, and it intends to please in both substance and style.

To recap, here are its specifications:

The brilliant display supports up to a 4K resolution (331ppi), but the best part about it is its thin NanoEdge bezels, which measure just 6.11mm on both sides. This is quite an efficient use of space, and goes a long way toward minimizing the space footprint of the machine.

That said, the bezels aren’t quite as thin as those on the Dell XPS 13 2-in-1’s InfinityEdge display, but we’re just nitpicking here. 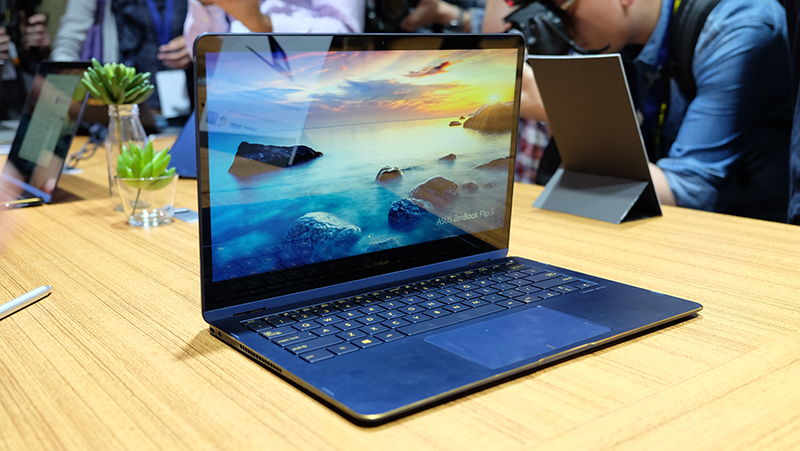 There is support for the ASUS Pen, which we’ve been told will come bundled with the convertible. However, it doesn’t quite come close to the level of precision offered by the new Surface Pen, and it offers just 1,024 levels of pressure sensitivity and reads between 30 and 300g of force. It also doesn’t take into account things like the angle of the pen tip for gradations in shading.

Having said that, it should do well enough for the new Windows Ink features in the Windows 10 Creators Update and let you use the device in tablet mode for some note taking. Still, we’ll have to wait for when we have more time with the system to give a proper verdict on how good the pen feels. 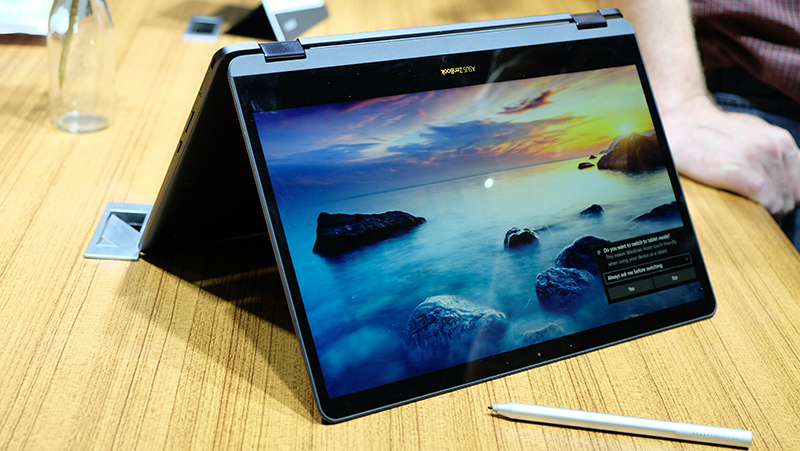 However, we couldn’t help but notice how well-built the hinge mechanism felt. ASUS calls this its ErgoLift hinge, and it features a dual-gear steel alloy construction that offers one of the smoothest 360-degree rotations we’ve experienced. 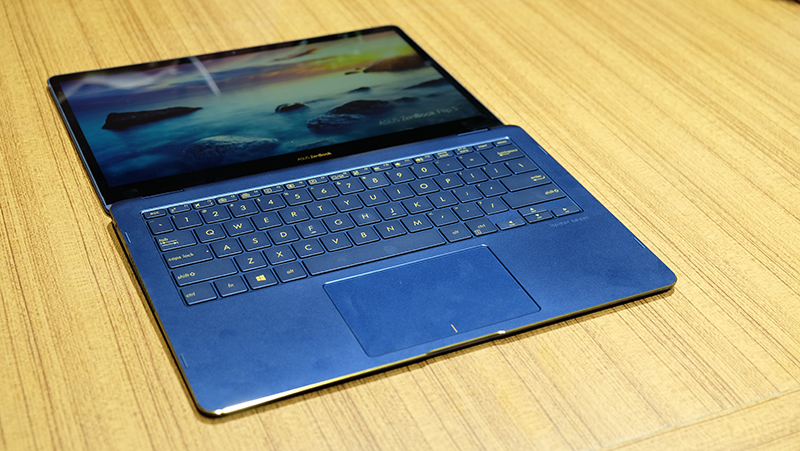 It’s difficult to describe, but the movement felt very fluid, with just the right amount of resistance. ASUS called attention to the hinge’s durability as well, and it said that the design was put through a 20,000-cycle stress test to check that it could stand up to the demands of daily wear-and-tear. 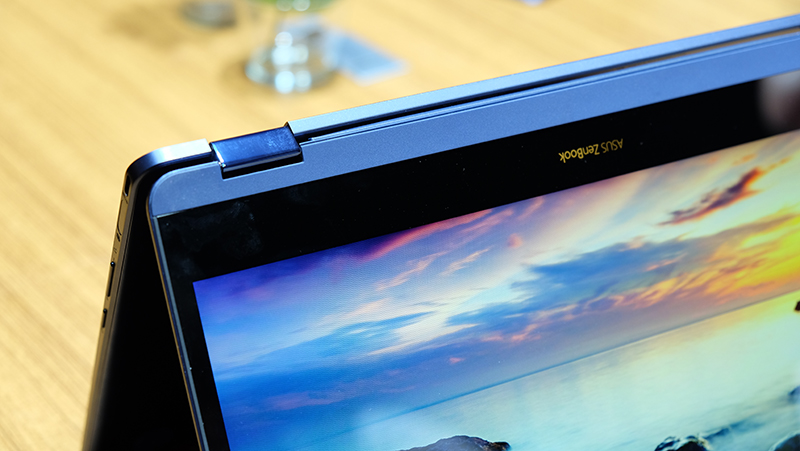 The hinge doesn’t span the entire length of the notebook either, and the mechanism is ensconced inside two metal covers to protect it from damage. It’s compact and unintrusive, and it does its job without calling attention to itself. Furthermore, when folded over the entire way, the device didn't exhibit any flexing (at least in the short time we spent with it), and both halves fit together very nicely. 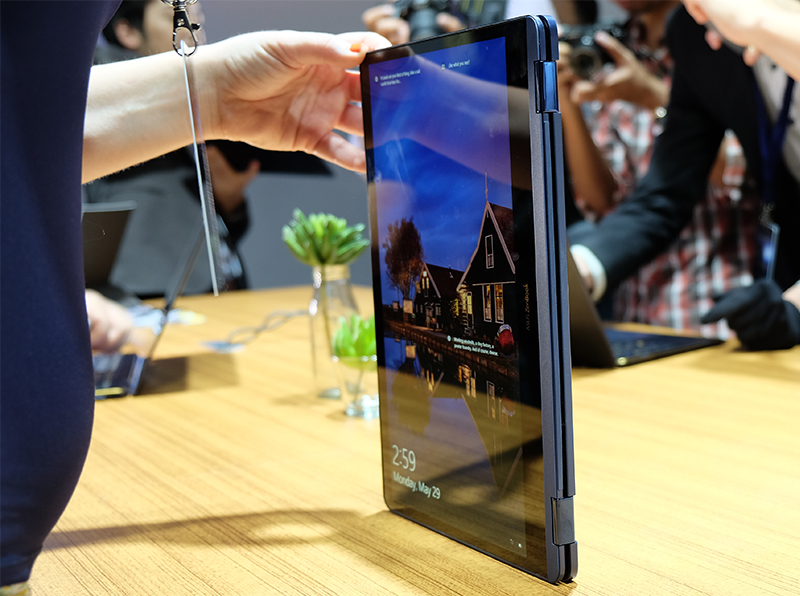 In addition, the hinge will tilt the keyboard up slightly when in laptop mode, which makes for a slightly more comfortable typing angle and obscure part of the bottom bezel, thus creating the illusion of a thinner bezel.

The backlit, chiclet keyboard offers 1mm of key travel, which is nothing to get excited about. Still, while the typing experience definitely feels shallow, it is no worse than what you’ll get on other comparable systems. 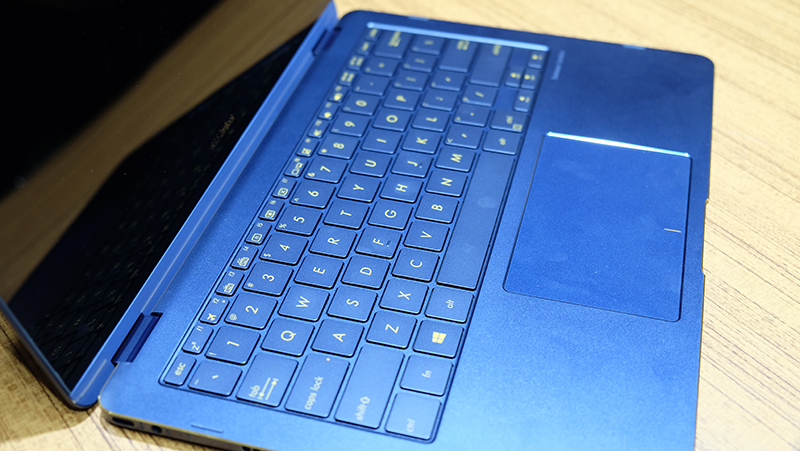 Finally, you get two USB 3.1 (Gen 1) Type-C ports for connecting peripherals, both of which also support charging and display output as well. There’s unfortunately no Thunderbolt 3 support, although if Intel has its way, instances like this could eventually become a thing of the past.

The battery on the ZenBook Flip S is quite a small 39Wh model, but ASUS says you can get a 60 per cent charge after just 49 minutes, so you can get out the door faster when you’re in a rush. As a final flourish, there’s also a fingerprint sensor built conveniently into edge for quicker sign-in with Windows Hello.

The ZenBook Flip S starts at US$1,099, but ASUS didn’t release any details on when it would be available yet.